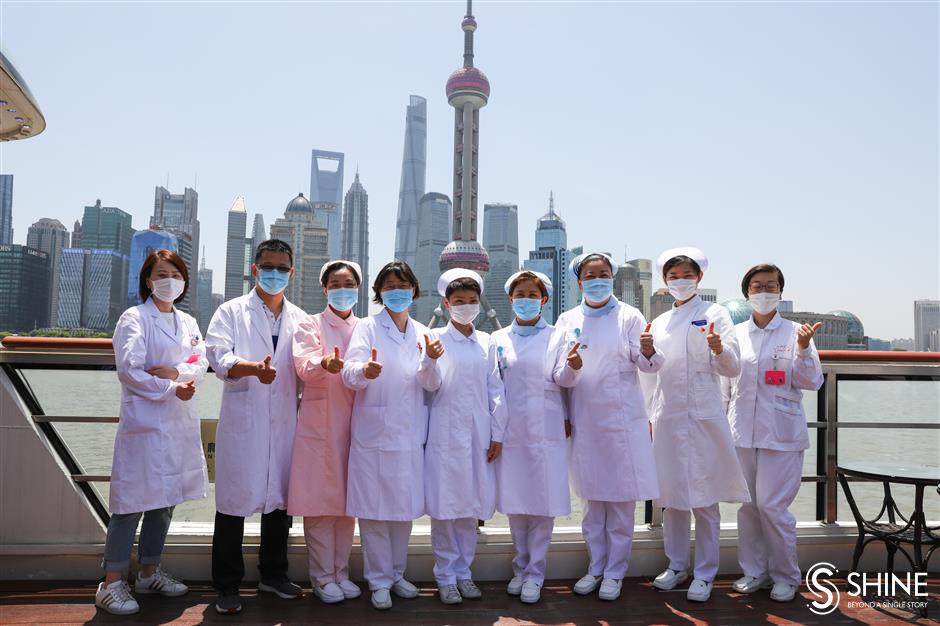 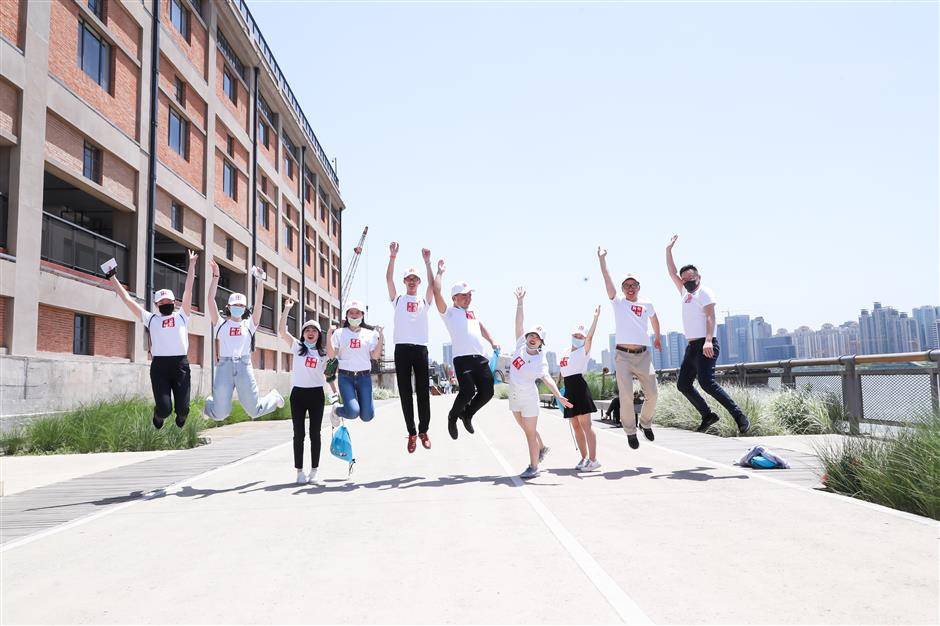 People participating in a walking tour pose for a picture along the Huangpu River waterfront in Yangpu District on Tuesday. 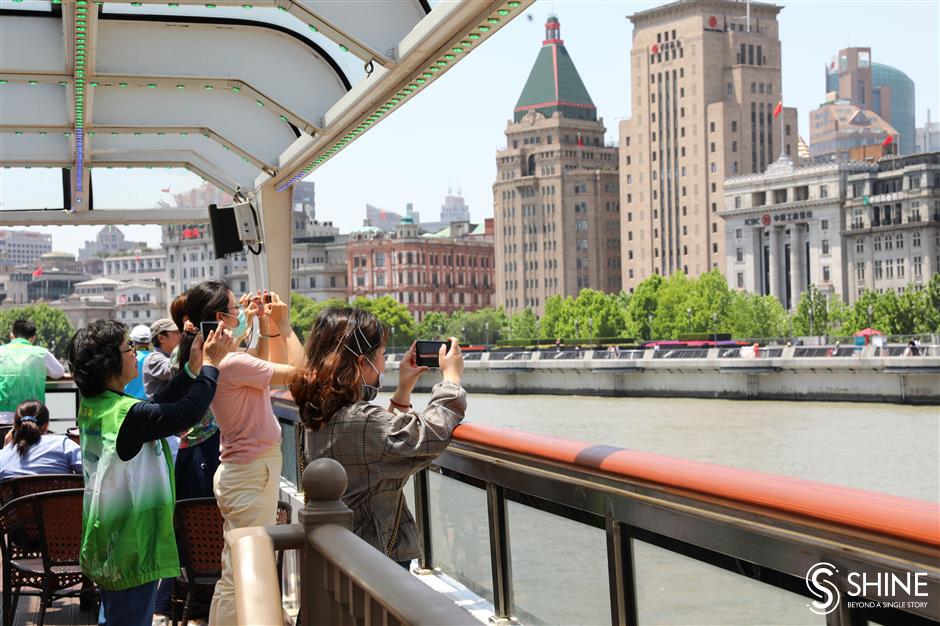 People enjoy the Huangpu River landscape on a cruise tour on Tuesday.

A total of 121 cultural and tourist attractions across the city are offering discounted tickets to visitors, among them 42 are targeting medical workers in gratitude for their dedication in the coronavirus battle, the Shanghai Administration of Culture and Tourism said.

The aim of the plan is to help residents and tourists discover the city's new splendor, landscapes and activities, thus boosting consumption and confidence, the administration said.

The discounted admissions are available on lvmama.com, a Shanghai-based online travel operator, the administration said.

Another 128 tour routes in the city were released on Tuesday. They last from half-a-day to three days.

These include fruit picking tours in Jinshan District and the Pudong New Area, fishing tours in Fengxian District, walking tours in the West Bank of Xuhui District and along the Suzhzou Creek, cycling tours along the Huangpu River and on Wukang Road, flower appreciation tours, health runs, tours of buildings designed by renowned architect Laszlo Hudec, trips to ancient towns and streets, countryside tours, and cultural tours to art galleries and museums in the city, the administration said.

The vehicles of tour groups are strictly disinfected, and tour guides, drivers and tourists are required to have their temperatures checked, the administration said.

Lists including more than 100 recommended restaurants and another 100 cultural and innovative products representing Haipai (Shanghai-style) culture were also revealed on Tuesday.

Some medical workers, community officials and volunteers who stand at the front line in the battle against the COVID-19 pandemic had a sightseeing tour on the Huangpu River on Tuesday in gratitude for their service.

Fang Fang, 36, a nurse of the Shanghai Yangpu Hospital of TCM, came to Wuhan, the former epicenter of COVID-19 in Hubei Province, on the fourth day of the Spring Festival.

"I applied to come to Wuhan immediately because I wanted to make my contribution in such a rare and special period for medical workers," Fang told Shanghai Daily.

"My parents expressed great support on my decision and we used video chat every day to eliminate their concerns during my stay in Wuhan," she said.

"My 8-year-old child is very proud of me, which made me happy," she said.

Fang said it took her two hours to take on and remove her protective clothing each time.

"This is my first visit to the Huangpu River cruise tour, and I am excited," she said.

Liu Ping, a doctor at Shanghai First Rehabilitation Hospital, worked at intensive care units of the same hospital in Wuhan. She stayed there for more than 50 days without a break.

"Since I returned to Shanghai in March, I keep a busy schedule and I will spare more time to accompany my family," she said. "It is actually my first tour after returning to Shanghai."

Liang Yilin, a community worker at Daqiao Subdistrict in Yangpu District, had not taken a single day of rest since the Spring Festival as she worked at the front line, particularly on the transfer and quarantine of residents arriving in Shanghai from overseas.

"The work is 24-hours depending on their arrival and I also take night shifts," she said.

"I don't have time for sightseeing and the tour offers a pleasant short respite," she said. "Although I am busy, it is worth it for the safety and health of residents." 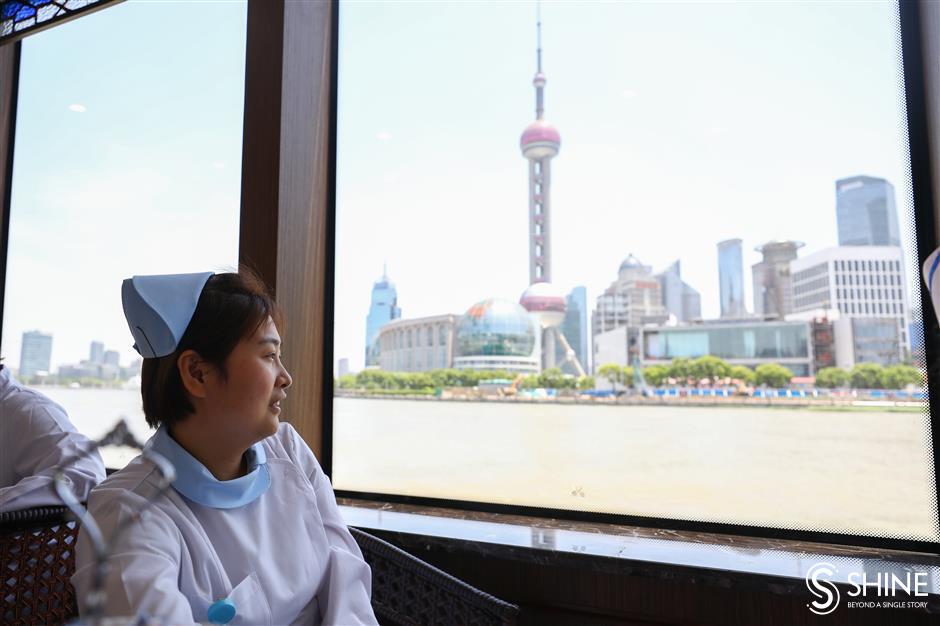 A nurse enjoys the landscape of Shanghai during a Huangpu River cruise tour on Tuesday.