The city’s two-month shopping festival now in full swing offers plenty to keep consumers happy. In Jing’an, promotional activities, both online and offline, are being held, with big discounts, tax-free merchandise and the launch of new products and brands. The festival has also ushered in the return of the pop-up fair outside the Jing’an Kerry Center. 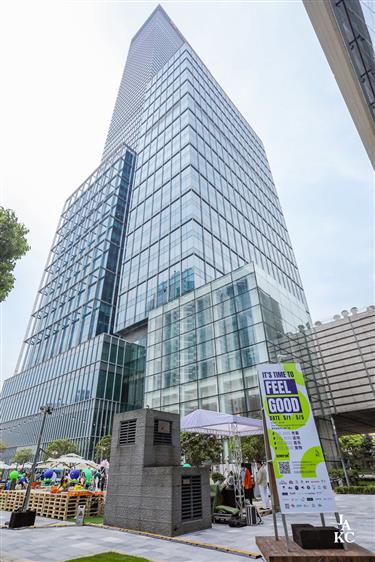 The pop-up fair outside the Jing'an Kerry Center is a popular attraction with both expats and local residents. 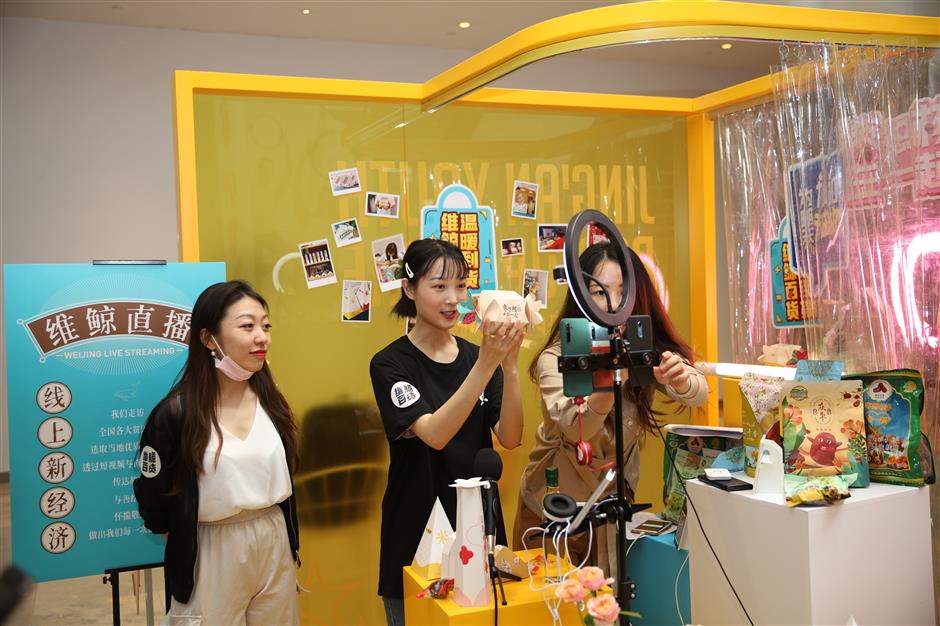 Livestreaming is used to target young consumers at the Jing'an Youth Pop-up Store.

The fair returned during the five-day Labor Day holiday in early May and has since become a popular place for visitors.

It features games, stalls, snacks and entertainment in a spring garden setting along a road laid with artificial turf and decorated with colorful balloons.

Due to nice weather, the fair was jammed with expats and locals on May 4, with most people wearing masks. Free hand sanitizer was available.

With pets in arms or beer in hands, people strolled to peruse the merchandise in stalls, sat on benches to enjoy music and even participated in exercise classes under sunny skies.

“The sun was out so we decided to bring our dogs along,” said a Japanese visitor. “There are a lot of activities and shops here.”

Local Venessa Zheng came to the fair with friends. Wearing a floral print dress and carrying a straw bag, she was dressed for a picnic and took multiple photos of the outing.

“Finally, this beloved open-air fair has reopened,” she said. “I missed the night fair held during the winter. There are so many interesting things to see, including unique handmade accessories.”

Lana Khovracheva, from Moscow, operated a tea shop in the fair – her first time taking part in the event. She said she was surprised by the number of visitors, and both Chinese and foreign visitors liked her shop. Business in Shanghai is quickly gathering pace after the coronavirus lockdown, she added.

According to the Jing’an Commerce Commission, a popular weekend night fair on Anyi Road, a small lane near the Jing’an Kerry Center, is expected to reopen at the end of May or in early June.

Another pop-up fair is running on the B1 floor of the Kerry Center to promote new products of time-honored brands in Jing’an.

They include herbal essential oil combs from 350-year-old Leiyunshang TCM pharmacy and bookmarks in the shape of traditional frog clothing fasteners from 84-year-old Longfeng Chengsom. Other brands, such as 91-year-old Humsuit suits and 103-year-old Hongxiang women’s apparel are also participating in the fair.

Zhu Shunshun, a designer from the marketing department of Leiyunshang, hosted a livestream on Bilibili on May 4 to promote the herbal essential oil combs. It drew some 400 viewers.

“They asked me to explain the makeup of the combs and where to buy them,” Zhu said. “Some asked me if the combs would make their hair thicker.”

According to Kaikai, which owns the combs, frontline medical workers are entitled to free vouchers as a tribute to their work in the fight against coronavirus. 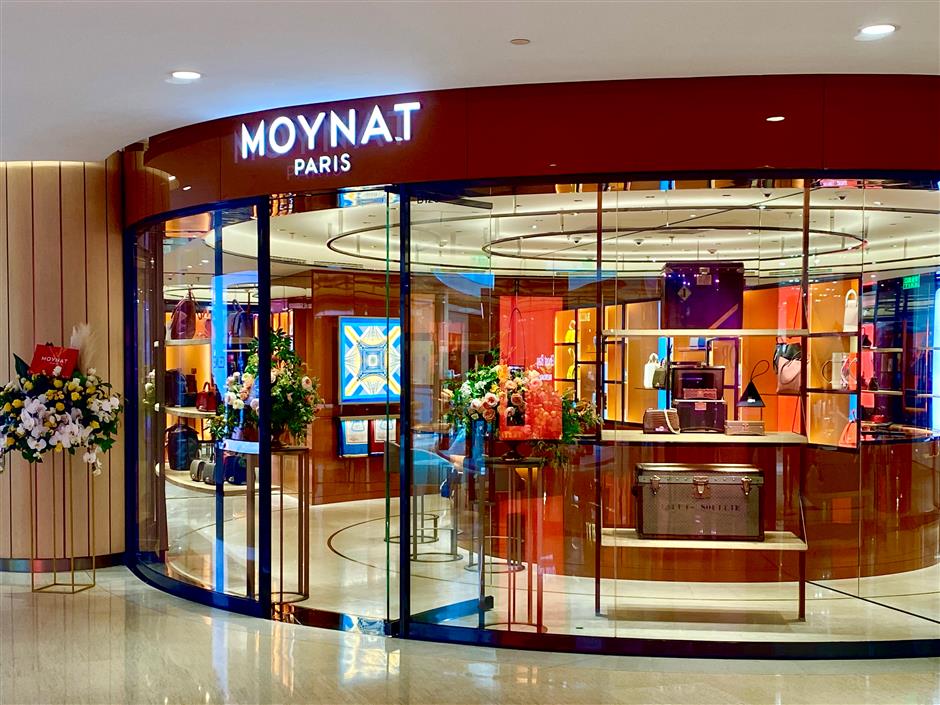 In the past two months, luxury brands such as LVMH, Kering and Richemont – which all have regional headquarters in Jing’an – have launched new products.

It’s rare to see so many debuts in such a short time, according to Lin Xiaojue, director of the Jing’an Commerce Commission.

“Some are global debuts and some are limited editions,” she said. “There are also ‘China only’ products. Customers can have a great shopping experience in Jing’an and be the first to buy new merchandise.”

Many international brands see Jing’an as an entry point into domestic market. More than 2,000 domestic and overseas brands are found in the district.

“Jing’an hopes to seize the situation of more Chinese people buying locally the products they used to seek out on overseas trips,” Lin said.

Debuts include a new lines from Louis Vuitton, Alexander Wang, Givenchy and Dior.

Richemont’s 14 brands, such as Piaget, Vacheron Constantin and Van Cleef & Arpels, will bring more than 100 new products to the district within five weeks.

About a month ago, Japan’s fashion house NOLLEY’S opened its first shop outside Japan, located in the Jiuguang Department Store. The store reports good sales, thanks to the ongoing shopping festival.

The fashion house was worried that the store launch might be delayed by the coronavirus outbreak, but those fears proved unfounded.

“China plays a very important role in the global market, and we believe it’s a very potential market,” NOLLEY’S said. “That’s why more international brands are trying to get into Chinese market.”

Earlier this year, Italian coffee roaster Lavazza opened a flagship store in the Crystal Galleria, the first of its kind outside Italy. It has become a new hotspot for both locals and expats.

The company has emphasized its 125-year-old history and Italian roots by decorating the store with typical Italian décor, such as marble, brass and Venetian glass. Walking through a tall golden arch gives customer the feel of a Renaissance experience. A giant ceiling painting features a couple, with Lavazza coffee cups in hand, on the famed Sant'Angelo Bridge in Rome.

A giant installation, in the style of Lavazza’s iconic coffee maker Carmencita, has become a popular photo-taking site.

According to the Italian company, China is a “fascinating country” where increasing numbers of people want a quality brew. More shops in China are planned. 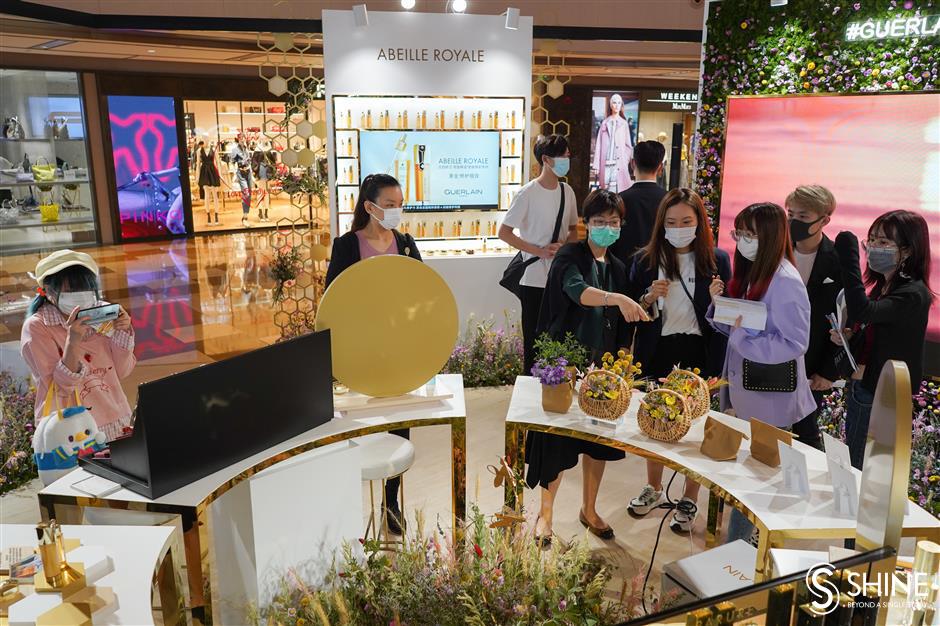 Shoppers are drawn to the Shanghai International Cosmetic Festival at HKRI Taikoo Hui. 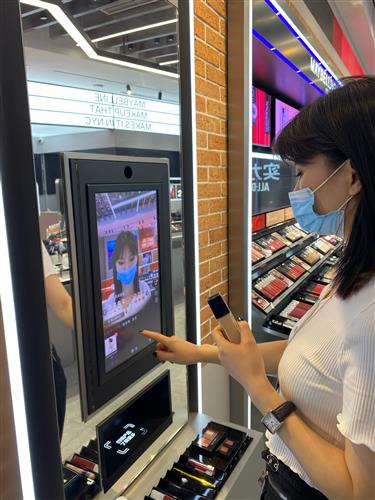 The district is home to the regional headquarters of international beauty companies such as Japan’s Kanebo, La Prairie from Switzerland, doTERRA from the US, and France’s L'Oréal, Sisley, L'Occitane and Clarins.

After doTERRA, Sisley and L'Occitane set up offices in Jing’an last year, domestic sales have increased.

Despite the coronavirus outbreak, Shanghai chalked up a 3.4 increase in sales of cosmetics in the first three months of this year, largely because of online orders during a stay-at-home period, according to local economist Chao Gangling.

“For the young generation, cosmetics are part of daily necessities,” he said.

China is now the biggest market for L'Oréal.

"We hope to expedite the introduction of new brands, new products, new business formats and new technologies in the city, and to launch Asian and even world premier products for more innovative offerings here," Fabrice Megarbane, L'Oréal China president and CEO, told the opening ceremony of the cosmetics festival,

Since April, the company has released hundreds of new products. In the first three months this year, the company’s domestic sales rose 6.4 percent from a year earlier.

In January, makeup giant Maybelline, now owned by L'Oréal, opened its first global concept shop on Wujiang Road. The store uses augmented reality technology to allow customers to see which makeup foundations suit them best without having to try too much on their faces. 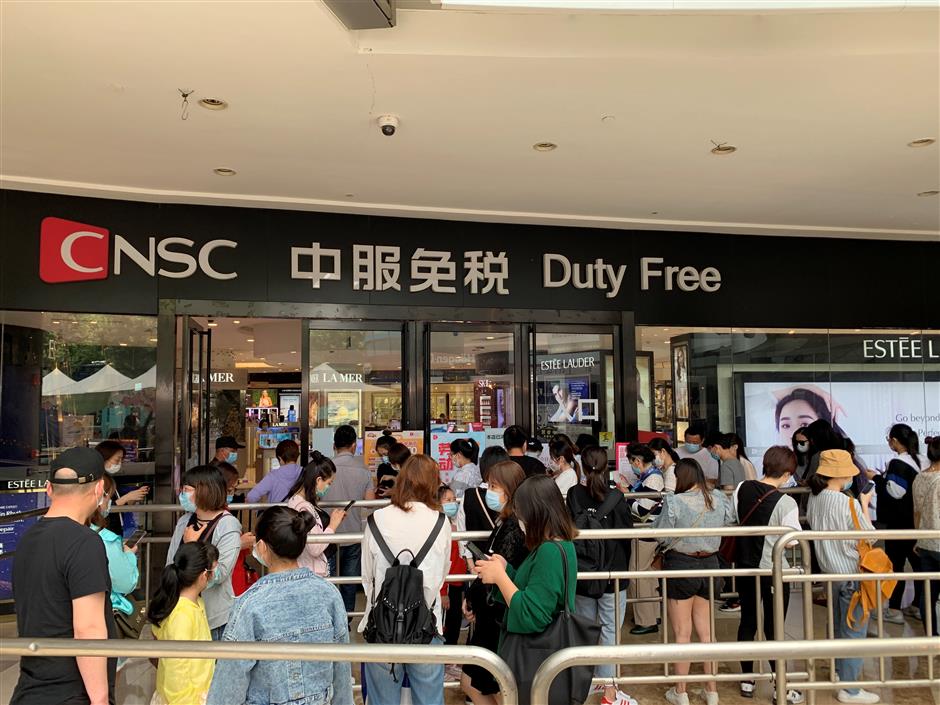 It took Zafar Engin just five minutes to claim the tax back on his purchases at the Plaza 66 shopping mall, thanks to a new one-stop, tax-refund service launched on May 1.

Engin, who’s from Turkey, was on a business trip to Shanghai and visited the mall to buy gifts for his family.

After he bought a blouse for his wife at the Balmain store, he went to the refund desk on the fourth floor to claim his tax back.

“It’s very convenient to just go upstairs to get the tax back,” he said. “It’s my first time to get a tax refund in China, and it’s much more convenient than in many other countries,” he said.

Engin had to show his passport and invoice, and fill in a tax-refund application form. Within five minutes, he received 200 yuan (US$28) in cash. When he leaves China, he needs to post the tax refund form, with its customs stamp, in a designated mailbox at the airport, completing the procedure.

More than 30 brands at the mall are taking part in the service, including Hermes, Gucci, Fendi, Celine, Prada, Louis Vuitton and Christian Dior.

From this month, foreign visitors and residents of Hong Kong, Macau and Taiwan, who stay on the Chinese mainland for no more than 183 consecutive days, can enjoy the tax refund service at Plaza 66, if purchases in any one store don’t exceed 30,000 yuan.

“It offers convenience and encourages customers to use the refunds to buy more,” said Zhang Linna, the mall’s general manager.

Yao Yunna, who’s in charge of the Balmain store, said she hopes the service will be expanded to other shopping malls to attract more foreign buyers.”

For local customers, the downtown CNSC Duty Free Shop in Yueda 889 Center is a good place to find bargains.

The shop, open to Chinese people within 180 days of their returning from offshore trips, sells products under more than 200 brands. The coronavirus outbreak didn’t harm business.

A customer surnamed Bai, said, “I used to always fly overseas, but now I have to stay at home. CNSC has become my top destination for buying cosmetics. I can find everything I want there, and the price is up to 70 percent off the market price.”