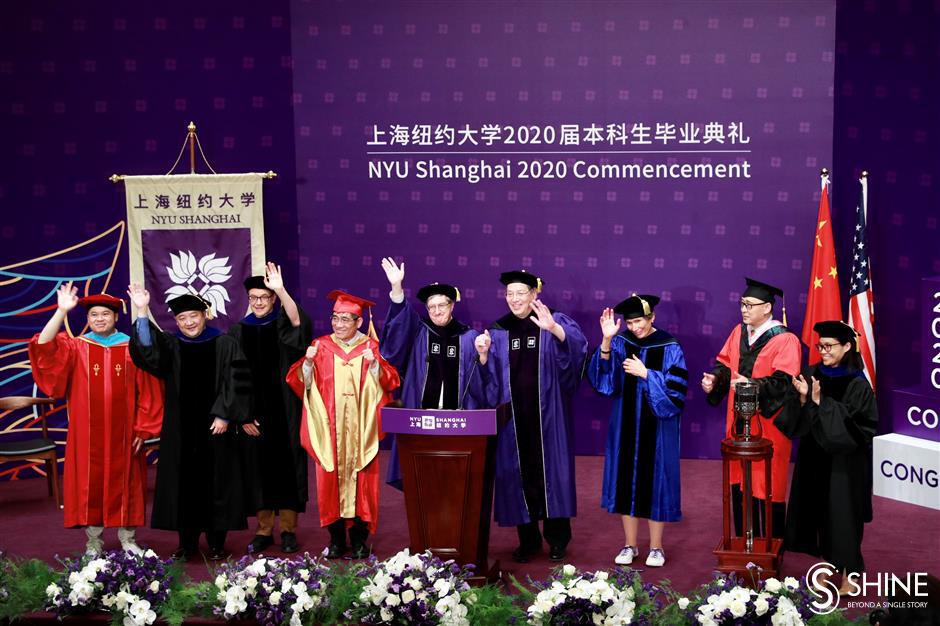 Some 230 undergraduates of Shanghai New York University celebrated their graduation in a virtual commencement ceremony on Friday evening.

The ceremony was attended by the graduates and their families who signed on from 24 countries and regions to celebrate the completion of their undergraduate education and receive their degrees. The livestream was also open to the public to demonstrate how an online commencement ceremony could be undertaken.

The NYU Shanghai Torch made a filmed progression through Shanghai, from the Bund to Tianzifang, to the construction site of the university's new campus and back to the Jinqiao residence halls and the academic building on Century Avenue. The celebration began at 20:20 to honor the Class of 2020.

Students and faculty representatives were then “processed” virtually, as their photos flashed up on the screen, followed by the university’s chancellor Yu Lizhong, vice chancellor Jeffrey Lehman and provost Joanna Waley-Cohen, who led the commencement live from the auditorium in the academic building. 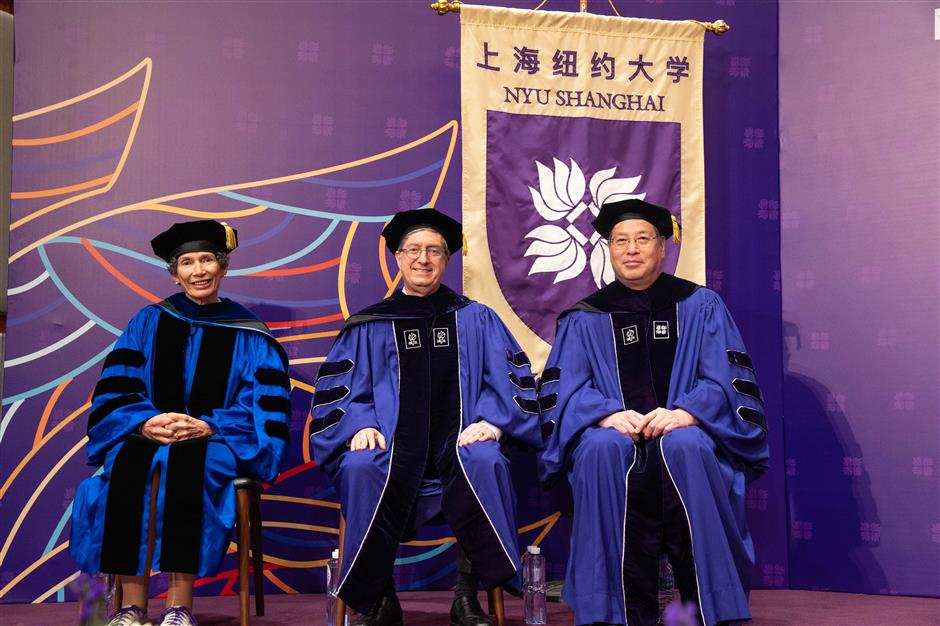 Yu praised graduates on the courage with which they faced the unexpected pandemic crisis. Yu said it demonstrated “the value and significance of constructing a university dedicated to multi-cultural integration, and to cultivating international, innovative talents with global vision and a sense of social responsibility.”

Yu also announced that this commencement would be his last before retiring three days later.

“With mixed feelings ... I will ‘graduate’ together with you, I will officially retire from my post as chancellor,” he said. “From NYU Shanghai’s conception, establishment to development, my heart has always been tied to this unique university and tied to the hearts of all of you.” 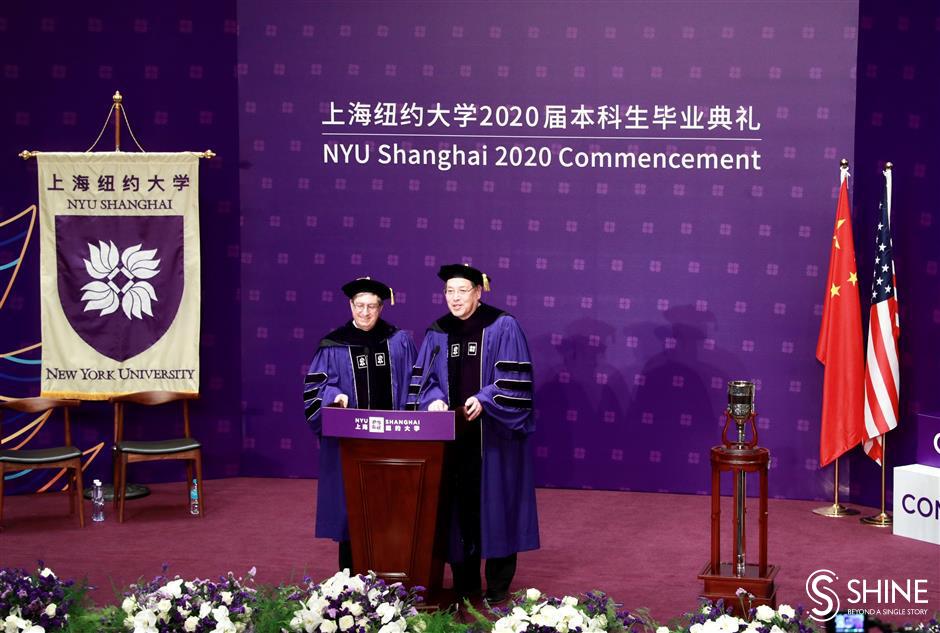 He also introduced Tong Shijun, former chancellor of East China Normal University and the next chancellor of NYU Shanghai, to students.

Lehman noted that the world had changed drastically since the Class of 2020 arrived in Shanghai in the summer of 2016, with both an infectious virus and infectious xenophobia threatening global stability.

"Please be the people that we have come to know and love, people who create and innovate in respectful, productive partnership with others who grew up in different cultures, in different nations," he said.

“You have the knowledge, skills, and virtues that are needed to sustain our planet, to nurture natural and human environments where every child and every adult can enjoy a fair opportunity to flourish.”

In a recorded speech, commencement speaker Jack Ma, founder of Alibaba, called upon students to find “a common path forward, a common path for cooperation” between China and the United States.

Yu and Lehman traveled to Hangzhou last week to present Ma with this year’s Chancellor’s Medal of Honor. 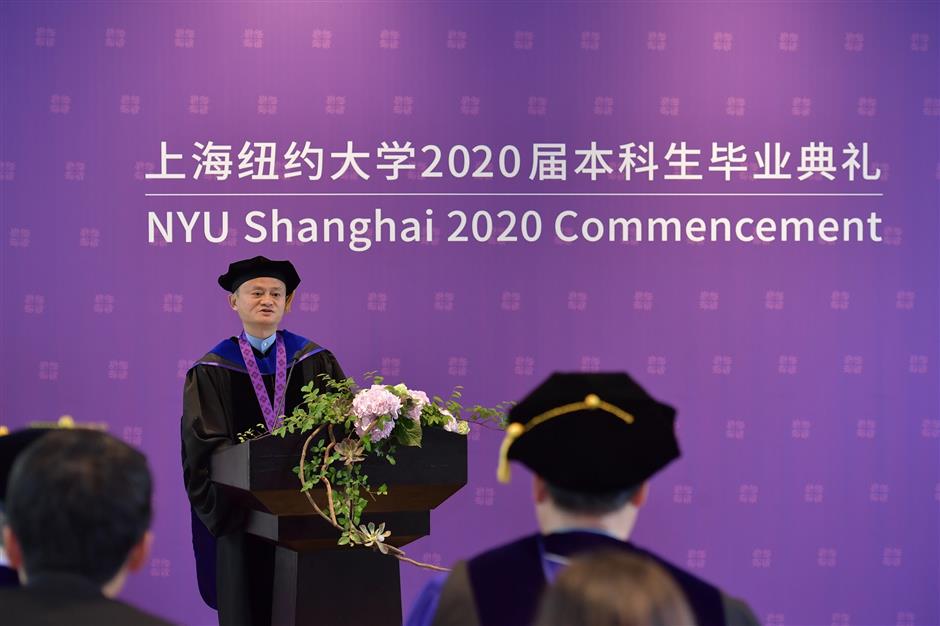 “At this moment in time to graduate, to look for a job, to enter society, you all may feel very unlucky,” Ma said.

Recounting the story of how a NYU Shanghai student in the Czech Republic sent masks to a classmate in Wuhan in the earliest days of the COVID-19 crisis and how that Wuhan student then sent information from Chinese doctors back to the Czech student after the virus had reached Europe, Ma said he had faith that NYU Shanghai students had already chosen the path of action.

Ma also reminded students of the importance of institutions such as NYU Shanghai, and the leadership role its graduates might provide the world.

“Each of us sitting here … has benefited immensely from China-US cooperation and globalization,” he said.

“Looking ahead, for China, for the United States, and for the world, finding a common path forward, a common path for cooperation is a mission that only young people can complete, this is your responsibility. For all of you graduating from this university, under the cooperation of these two great cities, at this moment in time, I believe your fate is destined to include this special mission.” 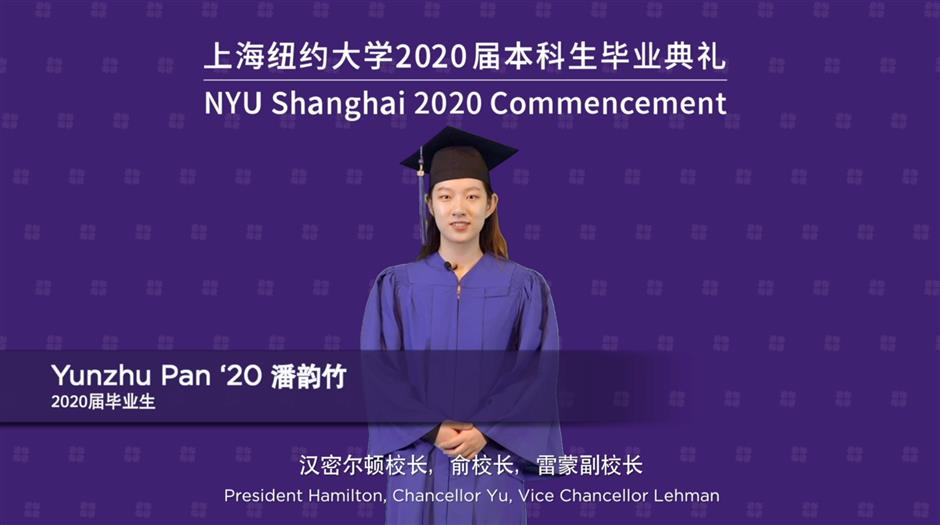 Student representative Pan Yunzhu, who spoke via video from her home in Shandong Province, reminded classmates of all the residence hall conversations they had had “bringing two or more different worlds together,” and how those conversations might become the foundation for a better world.

“We’re in an era where positions are taken so easily, that we often forget the fundamental things we share," she said. "Where there’s divergence and disagreements, it seems like everyone wants to talk, and no one wants to listen. And it was small moments like those on the slides of Jinqiao that kept me believing – believing that we’re on a great journey moving towards something extraordinary.” 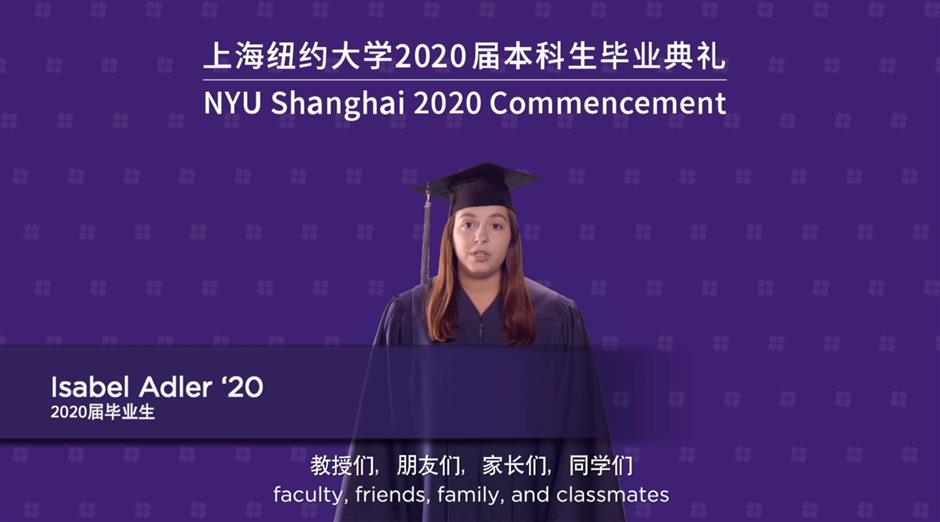 Student representative Isabel Adler speaks via video from her home in the US.

Student representative Isabel Adler, from her home in the US, also shared memories of her time at NYU Shanghai. She said from the moment she had stepped onto the campus, she knew she was surrounded by a group of driven, talented classmates with whom she knew she could grow stronger.

“We are .... the class that persevered through the most unknown of times and entered into a world that was a state of complete and utter chaos,” Adler said.

“But like we’ve overcome the challenges of the last four years, we will overcome this too. NYU Shanghai class of 2020 is ready for the world, and the world is ready for us. Now more than ever, the world needs people like us to be the light in the darkness.” 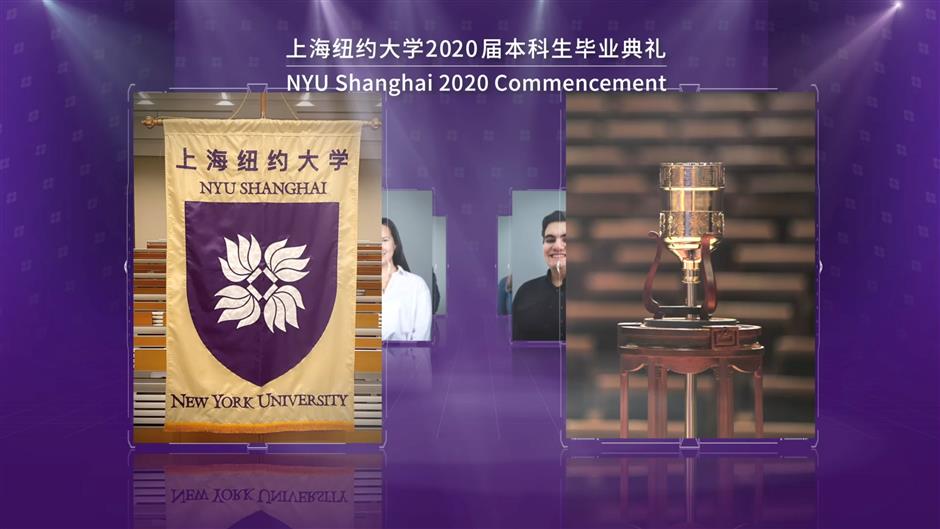 Despite the unprecedented challenges of the last few months, the Class of 2020 has numerous achievements, according to Yu.

He said three of the graduates have won Schwarzman Scholarships, while others have earned Fulbright Awards, the Clarendon Scholarship at Oxford University and the Erasmus Mundus Scholarship. Many have won admission to prestigious graduate programs at Columbia University, Tsinghua University and University of Colorado Boulder. Still many others are embarking on careers in multinational companies such as Alibaba Group.

Toward the end of the ceremony, Yu and NYU President Andrew Hamilton, who joined the ceremony via video, formally conferred degrees on the graduates. 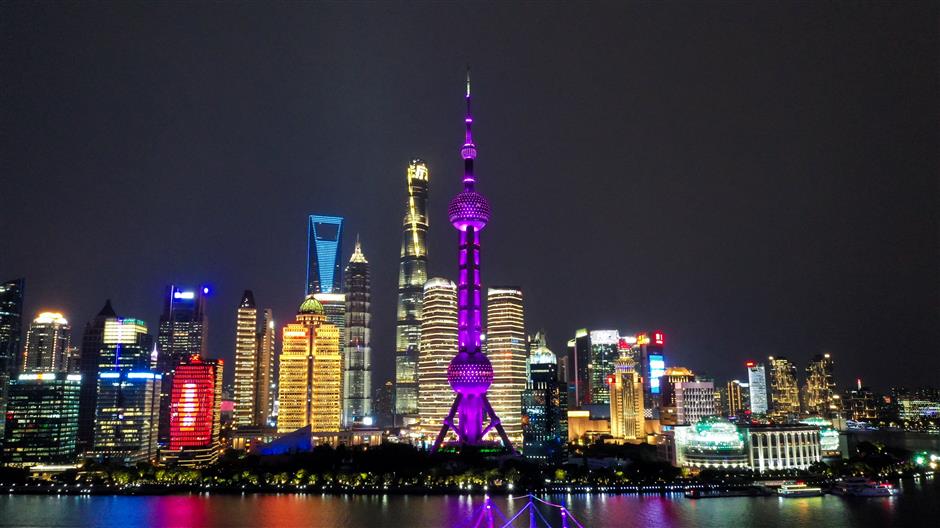 The Oriental Pearl TV Tower, Shanghai’s iconic landmark, was lit up in violet on Friday in honor of the NYU Shanghai Class of 2020.

Wang Zixin, a member of the student committee which organized the graduation celebrations, said he and his classmates had never expected their commencement would be like this.

“We’d planned a lot of celebrations which should have run through the semester till now,” he said. “We were disappointed at first when they had all to be cancelled due to the pandemic, but we soon brainstormed to think about how to make the celebrations possible online. And we made it.”

According to Wang, they  organized online performances and the 88-day countdown when more than 170 students made toasts online.

They also delivered a secret gift package including an academic gown and cap to every graduate so they could wear it during the online ceremony.

“I feel thrilled to see the familiar faces on the screen when our photos flashed up and also to hear Jack Ma’s speech at the special occasion,” Wang said. “I think the pandemic brought us anxieties at the beginning but it later made us more united.”

Maudie Carey, who returned to Shanghai in March after spending an extended winter break in her hometown New York, said she could not help shedding tears when she opened the gift box.

“I’m lucky to be here in Shanghai, but I still have many good friends who haven’t had the chance to come back. We are all apart but it makes me feel that we are still together,” she said.

Carey said she came back to Shanghai as the pandemic was becoming stable here while it was progressing in New York. She also missed Shanghai, her second home, and where she wished to work after graduation. 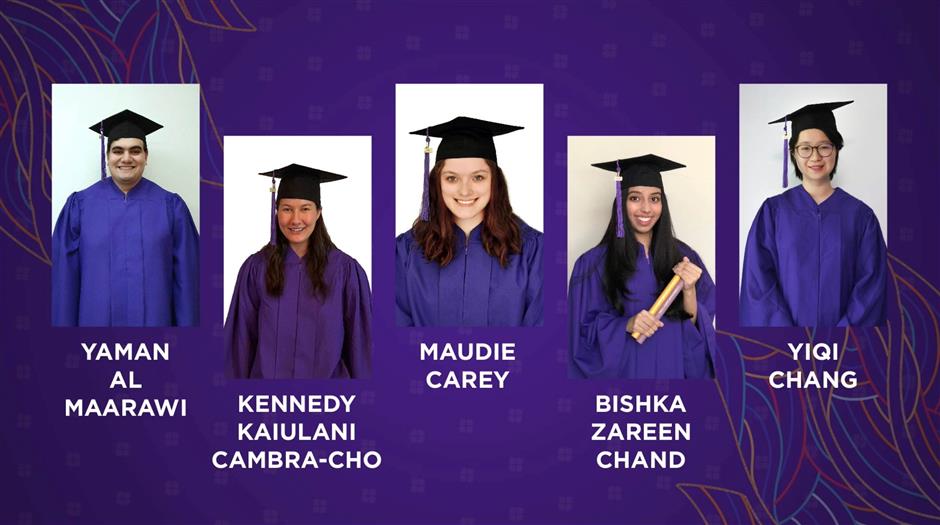 Students in academic gowns and caps