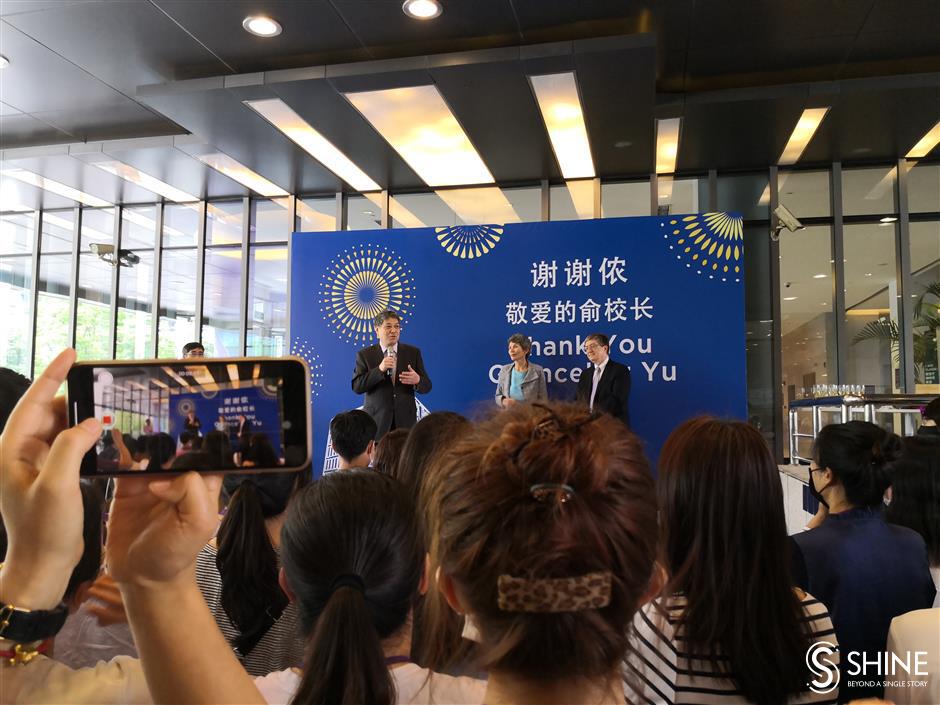 Closing the door of his office on the 14th floor of the Shanghai New York University academic building on Century Avenue in the Pudong New Area, Yu Lizhong officially stepped down as chancellor of the university and chairman of its board of directors on Monday.

At the final board meeting of the academic year on Monday morning, the board accepted his resignation and appointed Tong Shijun, professor of philosophy at East China Normal University (ECNU), as NYU Shanghai’s second chancellor and the chairman of the board.

“I’d like to express my gratitude to the university leadership, with whom I’ve enjoyed working closely over the years; to the faculty and staff, who have devoted themselves to making NYU Shanghai a model of Sino-US cooperation in higher education; to every class of students who have made us proud; and to everyone who has supported the university’s development,” Yu said. “NYU Shanghai’s value and significance have only become stronger since its establishment. Its spirit of exploration, reform, and innovation has taken root here. I truly hope that everyone cherishes it. My dearest wish is for NYU Shanghai to thrive and keep flourishing.”

Andrew Hamilton, president of New York University, said: “When the history of NYU Shanghai is written, one name will be on almost every page: Yu Lizhong. Over his tenure, Chancellor Yu’s leadership has enabled NYU Shanghai to blossom into a vibrant success, with award-winning faculty and students, research centers and curricular innovations that benefit the entire NYU ecosystem, and an atmosphere of dynamism and inclusion that blends the best attributes of China, the United States, and all of the nations represented on its campus into a true community. We will be forever grateful for his wisdom and leadership.”

Yu, 71, was appointed NYU Shanghai’s first chancellor in April 2012, soon after the Chinese Ministry of Education gave its preliminary approval to allow ECNU and New York University to establish the world’s first Sino-US research university. Yu, ECNU president for six and a half years before becoming NYU Shanghai chancellor, was deeply involved in negotiations between ECNU, NYU and government officials to create the university.

As chancellor, Yu shepherded NYU Shanghai from its earliest days in the ECNU Geography building with a freshman class of fewer than 300 students to a thriving university on Century Avenue with over 1,500 undergraduate and graduate students from some 70 countries poised to move to a new 114,000 square meter campus in Pudong’s Qiantan area in 2022.

Yu retired after a more than 40 years in higher education, having also served as a professor of geography and vice president of ECNU. From 2003 to 2006, Yu was also president of Shanghai Normal University.

On stepping down, Yu takes the title of chancellor emeritus of NYU Shanghai. 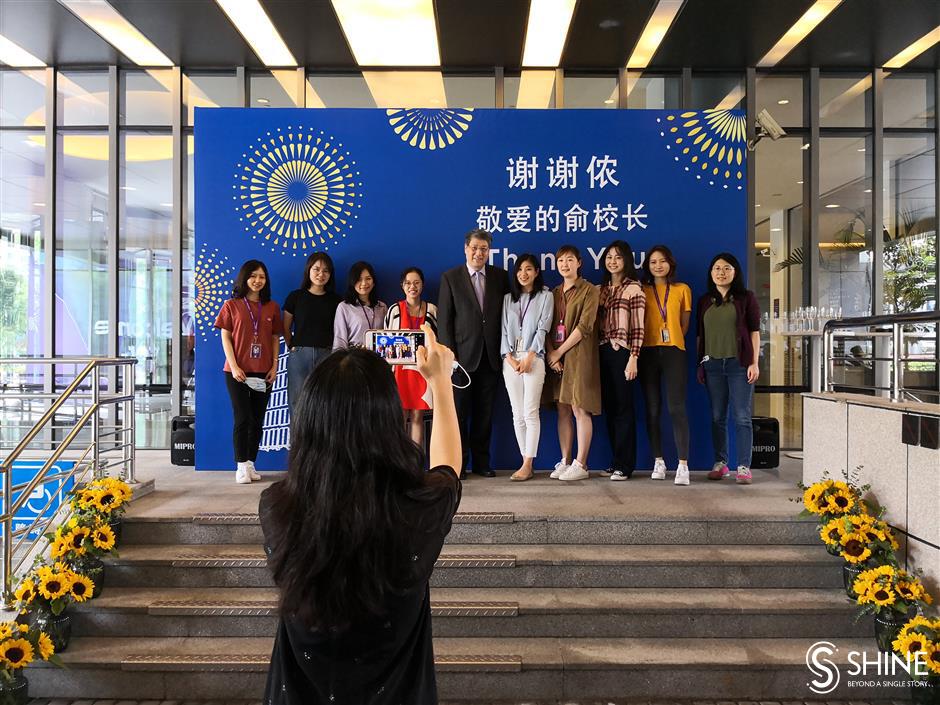 Tong, a philosophy professor and former ECNU Party secretary, said he was honored to have the trust of ECNU and the board.

“I was born in a working-class family and spent my childhood in the countryside. I began to learn English after President Richard Nixon’s visit to China. And I was among the first group of college graduates after the ‘cultural revolution,’” Tong said. “All my experiences have taught me the importance of education, especially higher education, as well as the significance of world peace and Sino-US friendship.

“I will, together with vice chancellor Jeffrey Lehman, provost Joanna Waley-Cohen and all other colleagues of the university, work dutifully to move the university even further by carrying on the fine traditions of higher education both of China and the US, contributing to the progress of the host region of the university, and strengthening the cooperation between its two founding partners, ECNU and NYU,” he added.

A Shanghai native, 62-year-old Tong helped lead ECNU from 2011 to 2019, while also teaching philosophy. Before that he was vice secretary at Shanghai Academy of Social Sciences from 2004 to 2011 and then also director of its Institute of Philosophy.

After graduating in philosophy at ECNU in 1984 he joined its philosophy department, becoming a full professor in 1994. Tong earned his PhD in philosophy at the University of Bergen, Norway, where he studied the works of contemporary German philosopher Jürgen Habermas. In 2000, Tong spent a year at Columbia University in New York City as a Fulbright Scholar. He has published more than 10 books and over 100 papers on epistemology, practical philosophy, and social theory in Chinese, English and other languages. 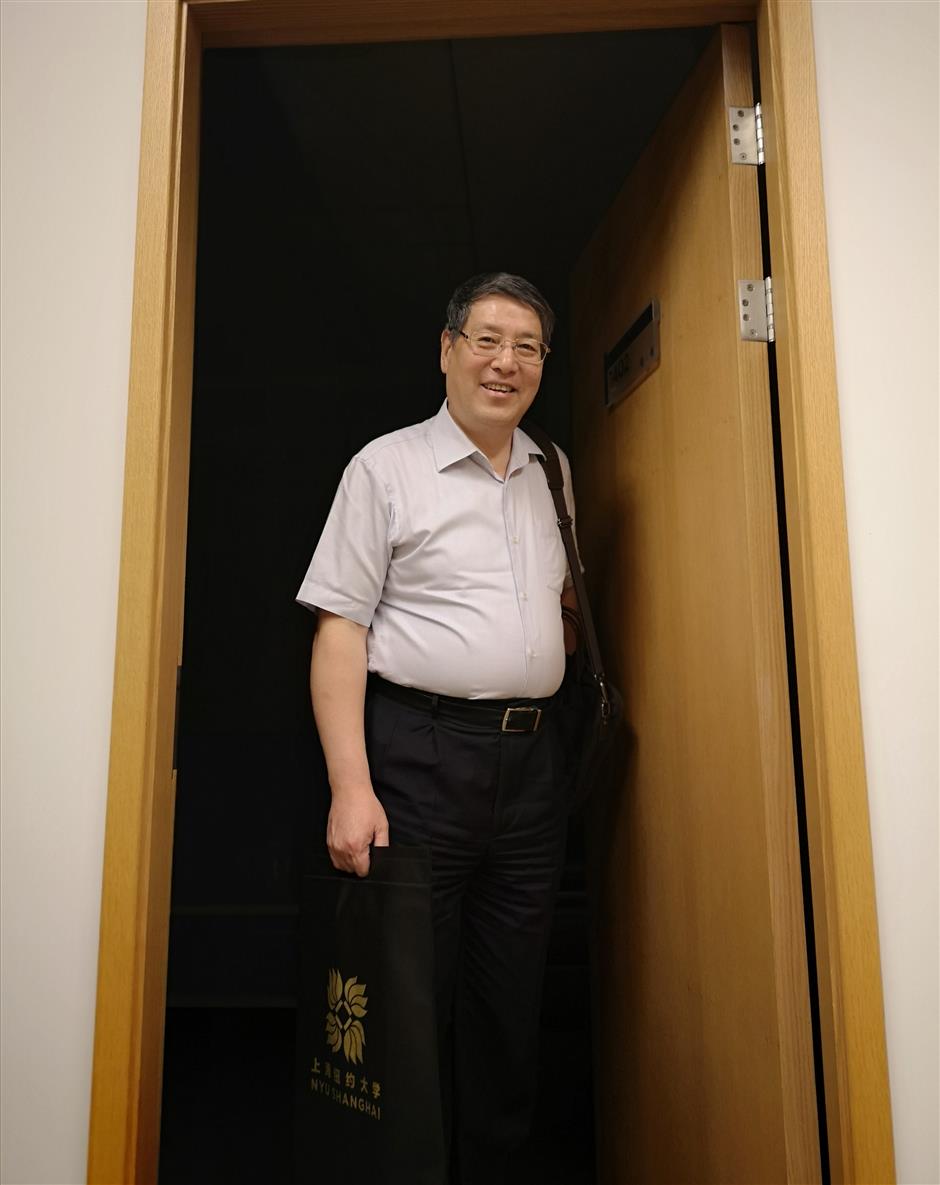