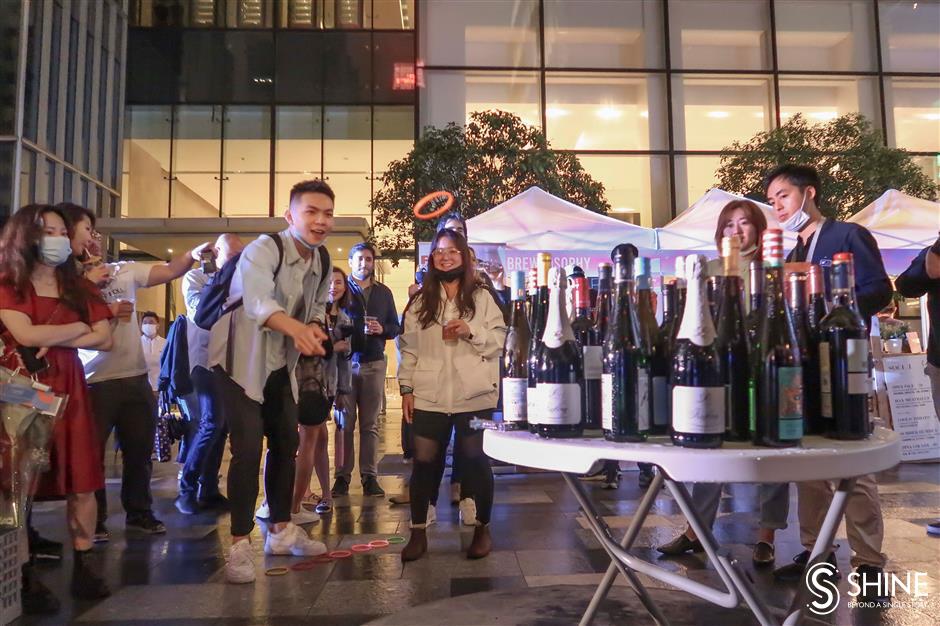 A visitor to the Anyi Road night market in Jing'an District tries his luck at winning a bottle of wine.

Jing'an District plans to further develop its backstreets, nightlife markets and duty-free shops, aiming to become a shopping paradise for everyone.

Despite the impact of coronavirus, Nanjing Road W., a world-class commercial street, has seen a 15.9 percent increase in sales year on year in June, ranking top among local districts, Lin told a press conference on Wednesday.

It was the second of a series of press conferences being held through the end of September featuring officials from the city's 16 districts introducing their developments.

Over 60 new stores opened in Jing'an between January and June this year, including 21 on or near Nanjing Road W. In January, makeup giant Maybelline opened its first global concept shop on Wujiang Road. Italian coffee roaster Lavazza opened a flagship store in the Crystal Galleria, the first of its kind outside Italy.

During the city’s Double Five Shopping Festival, luxury brands such as LVMH, Kering and Richemont — which all have regional headquarters in Jing’an — launched over 100 new products.

"Jing'an is making efforts to create a shopping paradise demonstration zone that everyone yearns for with more quality products and services," Lin said.

Forty-two high-end retail companies in Jing'an achieved a 48.9 percent increase year on year in sales between January and June. Total sales of 11 leading cosmetics companies in the district reached 11.9 billion yuan (US$1.7 billion), topping that of 2019, she added. 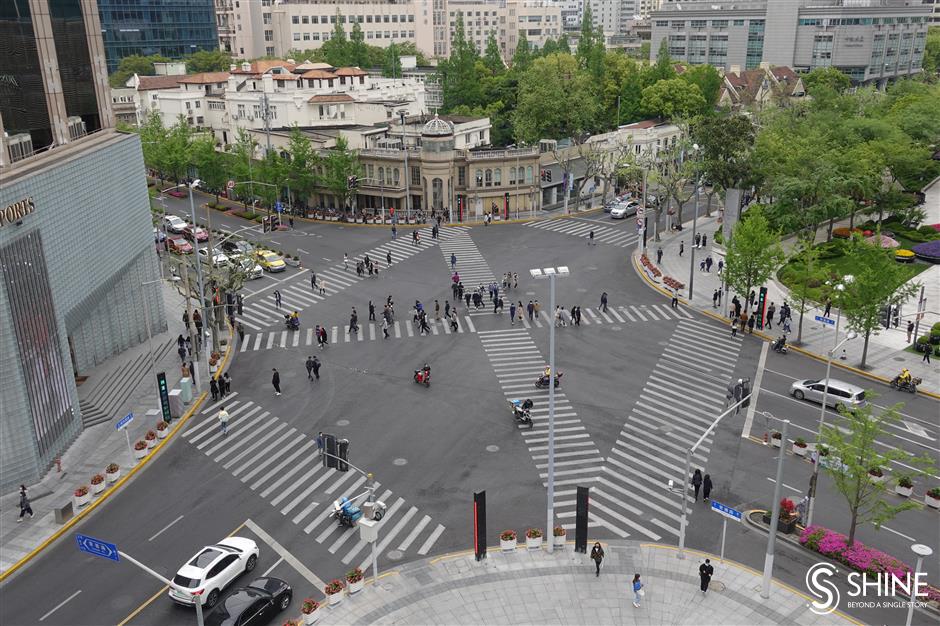 The intersection of Nanjing Road W. and Changde Road.

The backstreets will be further revitalized with their own distinctive features.

The district government released detailed plans in 2018 to spruce up 11 backstreets that feed into bustling Nanjing Road W. Distinctive features for every one of them will be based on location, history and individual culture.

Fengshengli, a Xintiandi-style commercial complex has become a popular place to dine, shop and take photos.

Lin said renovation will start on Wujiang Road recreational street this year. The road, parallel to Nanjing Road, became known in 1990s as a food street, dotted with barbecue stalls, dumpling shops and other eateries.

The district will also keep developing its nightlife economy, a new growth point for consumption, Lin said. The Anyi Road market, a pop-up pedestrian-only night street fair near the landmark Jing'an Temple, has become one of the most popular sites amid the city’s ongoing campaign to revitalize its nightlife.

Amid the COVID-19 pandemic, Jing'an saw a rebound in retail sales in April among downtown districts. Total retail sales of consumer goods in the first six months reached about 56 billion yuan, an 11.3 percent increase on year, the fastest in downtown, said Yu Yong, Jing’an’s Party secretary.

As a model of an international consumption city, Jing'an has gathered over 2,000 brands from both home and abroad. Most of the world's top level brands in Shanghai have set up flagship or specialty stores in the district, Yu told the press conference.

During the Labor Day holiday this year, the Nanjing Road W. commercial cluster was one of the most popular shopping destinations.

Special Reports
ADVERTISEMENT
61953
,
No new COVID-19 cases reported in Shanghai
Shanghai at the forefront of scientific and technological advancements
Resumption of tourism is on the right track
Songjiang switches on preferential polices for film and TV industries
Fair is just the job for those seeking work
Delicious summer fruit are as sweet as pie
Artists celebrate anniversary of UN with exhibition
No new coronavirus cases reported in the city
Film festival screens outdoor movies amid COVID-19
Customs measures up to make CIIE a success
EXPLORE SHINE