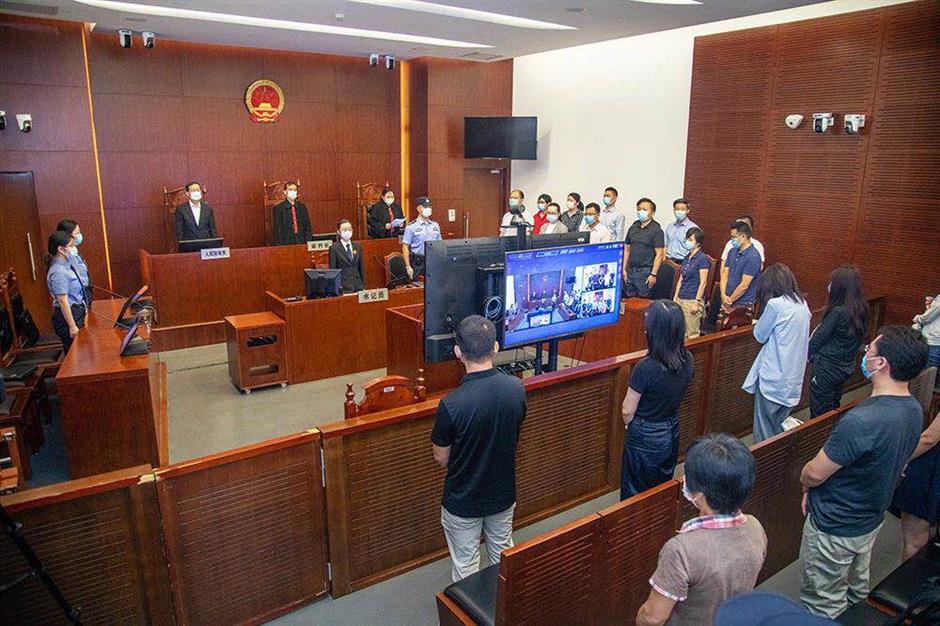 People accused in the Shanlin case on trial at Shanghai No. 1 Intermediate People's Court on Friday.

Zhou Boyun, founder and legal representative of Shanlin Financial Co, and Tian Jingsheng, its CEO, have been sentenced to life in prison over illegal fundraising through fraud involving over 73.7 billion yuan (US$10 billion).

Another 10 people were sentenced to between six and 15 years on the same charges. Shanlin Financial Co and all the people involved were fined a total of 1.5 billion yuan, Shanghai No. 1 Intermediate People’s Court said.

Zhou established Shanlin in the China (Shanghai) Pilot Free Trade Zone in the Pudong New Area in 2013 and opened thousands of branches with online lending platforms in 29 provinces and municipalities around the country, the court said.

From then, Shanlin had cheated investors by offering annual interest rates of between 4.5 and 18 percent. Some 620,000 people were attracted by the prospect of high returns, the court said.

The company had raised 73.7 billion yuan before Zhou turned himself in to the police in 2018 because of a broken capital chain, the court said.

The majority of the money (56.75 billion yuan) was used to pay capital and interest, while the rest of the money was for investment, lending and company operations.

The court said more than 250,000 investors had suffered losses of over 21.7 billion yuan.

Shanlin and its branch companies lost their licenses recently, according to the national enterprise credit information publicity system.

According to an earlier report, there were 53 suspects related to the Shanlin case. The remaining 41 could be charged with illegal absorption of public deposits, police said.