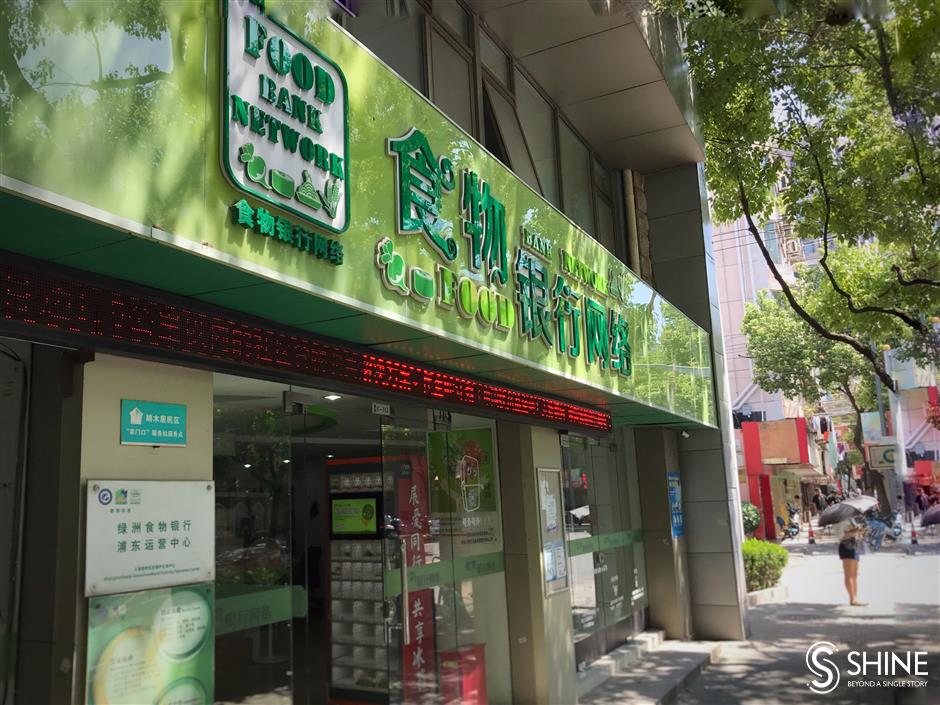 Sanitation worker Zheng Youying hurried to a nearby food bank after she finished work at 10:20am on Wednesday. There were just 10 minutes left before the site’s daily food distribution was over but there was still a long queue.

Luckily, she got what she wanted from the few leftovers. “I came a little bit late today. I hadn’t expected that I could get a bag of sweet potatoes which I really like,” she said.

The site on the Eshan Road in Pudong distributes food to local sanitation workers from 7:30am to 10:30am every day.

“We give away food to about 80 to 90 sanitation workers every day,” said Wang Mingjie, a Green Food Bank official.

There’s no sense of pity or contempt. Workers can pick what they want from a wide selection of fruit and vegetables, which, according to Zheng, makes her feel respected.

“It has been a year for me to get free food here,” she said. “There are different choices including greens, fungus and berries. For the first time in my life, I tried blueberries and pitaya. They are fresh and taste good.”

“It’s all perfectly edible food, but under the supermarket’s rules, fruit and vegetables should be thrown away if they aren’t sold the day they are put on the shelves. Some ugly yet good produce also ends in litter bins,” said Li Bing, director of the Green Food Bank.

She added: “Maybe the supermarket doesn’t want consumers to complain about the appearance and freshness of the produce. But as a result, it causes huge waste.” 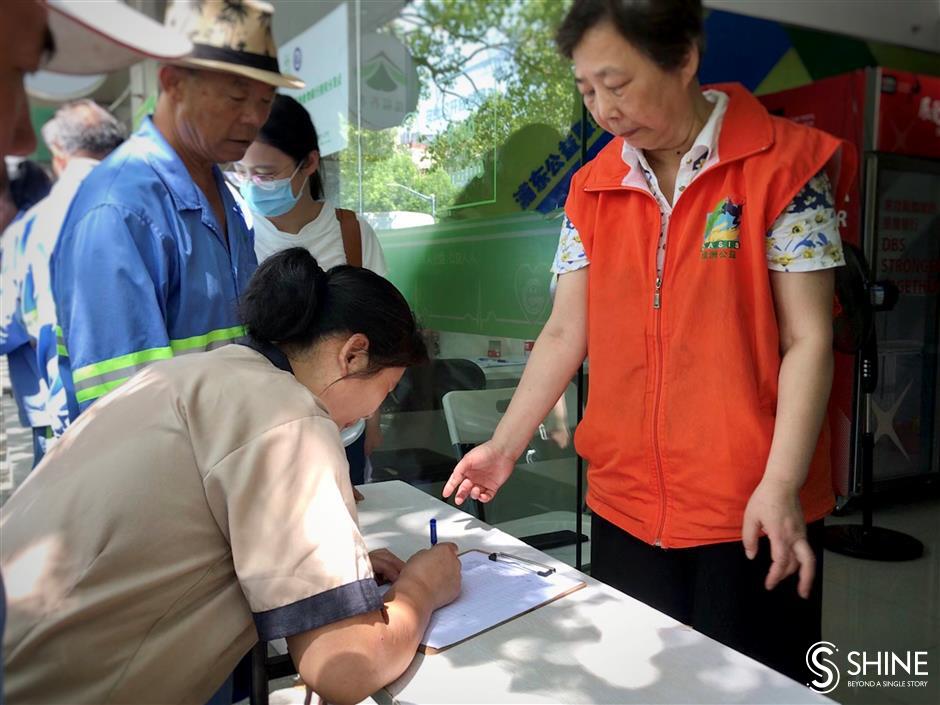 A cleaner registers her information before getting food. 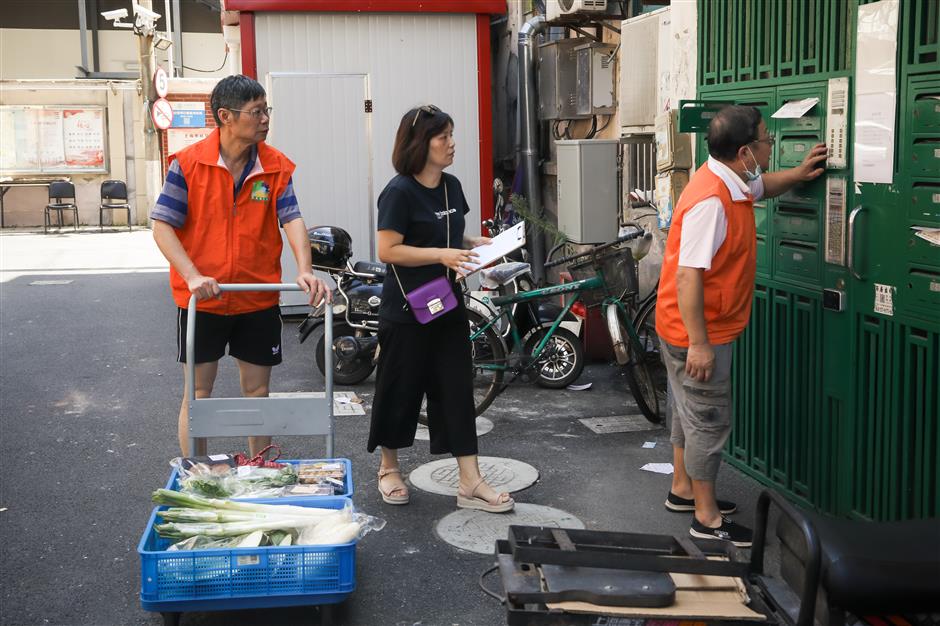 “We receive unconsumed fruits and vegetables because we can directly see whether they are fresh. We don’t accept fruit cups because fruits have been processed or raw meat because we can’t figure out whether it’s safe or not.” Li said.

She added: “To ensure food safety, we sign contracts with donors and ask them to show licenses and related food certificates. Every piece of information is uploaded to an online platform.”

Volunteer Gao Qixin said they remove price tags but retain other information, such as producer and expiry dates.

With other volunteers, Gao later took the remainder of the food to low-income families. “Besides fruit and vegetables, we also take them milk and chocolate near their expiry date,” he said.

The Green Food Bank, opened by the Shanghai Oasis Philanthropy Development Center, was launched in Pudong in 2015.

“It’s easier to carry out work in Shanghai because as an international metropolis there are a lot of companies sharing corporate social responsibility values and residents have an awareness of doing charity,” Li said.

The Green Food Bank has more than 200 sites across the country, with more than half of them in Shanghai. It is the first and only member from the mainland of the Global FoodBanking Network.

The food bank receives excess food not only from supermarkets and food factories but also donations from authorities and companies. Regular donors include Disney, Starbucks and Carrefour. Neighborhood workers and charity organizations help distribute to those in need.

“We’ve saved 580 tons of food worth nearly 32 million yuan which could have been thrown into garbage bins,” Li said. “More than 80 percent of it is excess food or near its expiry date.”

“Eateries were hit during the novel coronavirus outbreak. While it gave us a chance to store food,” Li said.

Next, she plans to open some mobile food banks to take food to people working at night and drive to suburban areas to offer help.

The food bank is working with the Pudong New Area to reduce food waste.

“China still lacks rules about food banks, which may worry some companies to donate food,” said Lu Xia, director of Pudong’s civilization creation department. “The government’s support is so important in the campaign against food waste.” 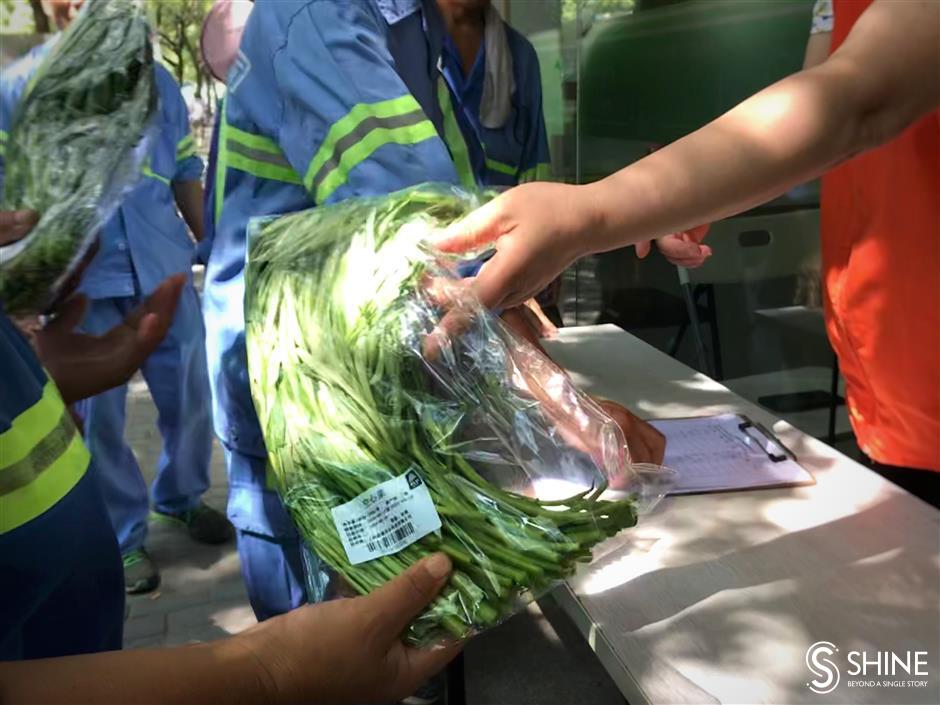