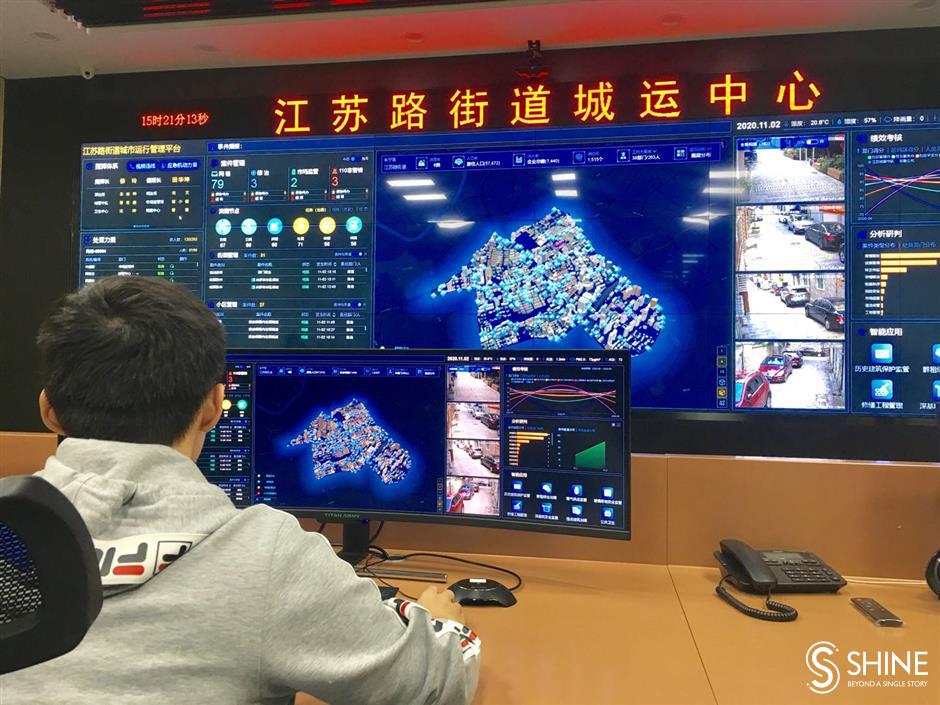 An urban management official from Jiangsu Road Subdistrict monitors the community issues through a large screen of a smart system.

Artificial intelligence and 5G technologies have been incorporated into the community management of historical neighborhoods around Yuyuan Road.

The urban management network of Jiangsu Road Subdistrict in Changning District has become one of the first downtown areas to use AI cameras to identify garbage eyesores and automatically send clean-up orders to community workers.

The system has helped to reduce the patrolling and inspection labor force by 75 percent for the neighborhood committee, who can shift focus to other matters, said Sun Junbo, deputy director of the subdistrict's urban management center.

About five subdistrict officials sit in front of a large screen at the center at 515 Changning Road to double-check orders sent by the smart system.

The system found two shared bikes parked in the middle of the pavement on Jiangsu and Yuyuan roads on Monday. An alert was soon sent to the mobile phone of the nearest community workers with a photo taken by the AI camera. After removing the bikes, the system will take another photo and decide whether to label the task as completed.

The system, developed by the high-tech Westwell-lab company based in Changning, has been used to monitor the treatment of garbage from home renovation and redecorating, a long-term problem for an area featuring hundreds of historical villas.

Self-service machines allow citizens and companies to complete over 300 types of transactions without the help of staff.

Yuyuan Road, for instance, which runs through Changning and Jing’an districts, dates back to 1911. It features well-preserved historical villas that were once home to big names such as scientist Qian Xuesen (1911-2009); writer, translator and scholar Shi Zhecun (1905-2003); as well as New Zealand-born writer Rewi Alley (1897-1987), who came to Shanghai in 1927 and was later involved in China’s revolution and development.

Over 70,000 residents are living in the areas under the jurisdiction of the subdistrict, covering 1.52 square kilometers. Many old neighborhoods have limited public space, so garbage such as old furniture and construction materials can easily block streets or affect nearby inhabitants, said Dai Tao, Party secretary of the subdistrict.

A smart camera known as Wellseesee has two “eyes” which detect the size and content of the garbage, said Tan Limin, chief executive officer of Westwell-lab. The cameras were first installed in the subdistrict in May and have now covered the whole region.

The system can spot garbage dumped in designated areas within five minutes. After analyzing the size and quantity, it will sent a pick-up order with 5G communication technology, and even suggest the size of the transport truck and the number of laborers needed. Garbage will be removed within 36 hours after being deposited, said Sun.

The system can also detect smaller rubbish being wrongly dumped around the area. 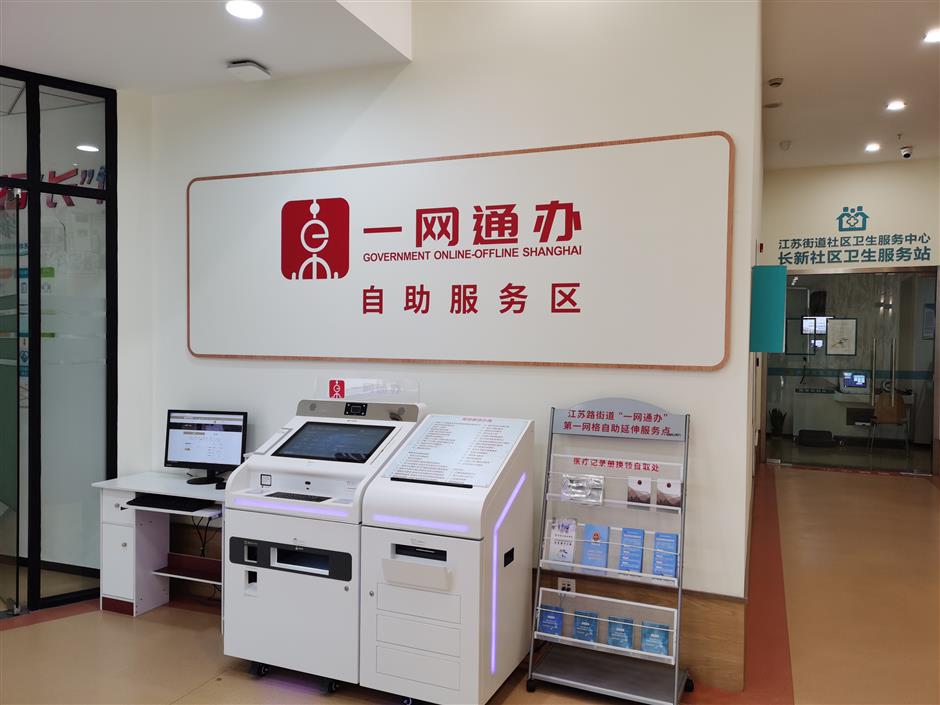 In August, the system detected a small heap of garbage on Anxi Road after midnight. The garbage, mainly disposable meal boxes, kept appearing in the same place over the following days. The camera then sent an alert to neighborhood committee staff who found the violator through the address on the box.

Garbage treatment complaints have been largely reduced after the introduction of the smart system in the community, Sun said.

Meanwhile, additional self-service machines of the Government Online-Offline Shanghai system have been installed across the area.

The machines allow citizens and companies to complete over 300 types of transactions without the help of staff. They include applications for residence permits, maternity and medical insurance, employment subsidies, credit record checks and lost identity cards and traffic matters.

The practice is part of the city government’s efforts to allow citizens and companies to access more government services via a single online platform.