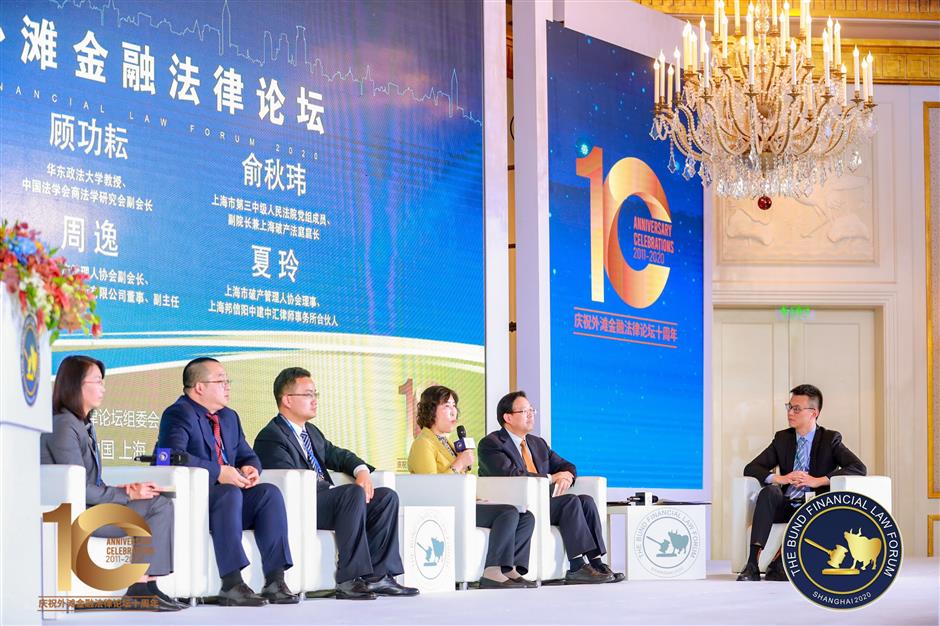 Experts and officials at the Shanghai Bund Financial Law Forum 2020 in Huangpu District.

Huangpu aims to create Shanghai's best business environment safeguarded by a complete legal system within three years, according to the district government, and will explore communication and cooperation in financial judicial practices involving foreign companies with the support of the district's financial court, prosecutor's office and the Shanghai Financial Court based in Huangpu.

A system to resolve business disputes will be established to protect the legal rights of business operators, while the Bund financial arbitration center will help develop financial risk alert, prevention and resolving institutions.

Officials and experts, including Tu Guangshao, executive director of Shanghai Advanced Institute of Finance, and Fan Gang, vice president of the China Society of Economic Reform, shared their views on topics that included how to enhance the legal protection standards to safeguard the opening up of the financial sector.

The annual forum was launched in 2011 to encourage communication between the financial and legal industries.

Huangpu has attracted 650 licensed financial companies and nearly 1,500 financial institutions. Last year, 163 new overseas investment projects worth around US$1.5 billion were signed in the district.

Huangpu has released 12 measures to implement China's Foreign Investment Law, which came into effect on January 1. These focus on further opening up, promoting foreign investment, upgrading services and protecting the rights and interests of investors. They cover the district's key industries of finance, trade, scientific innovation, culture and education.