Villagers on the move as quarantine ends 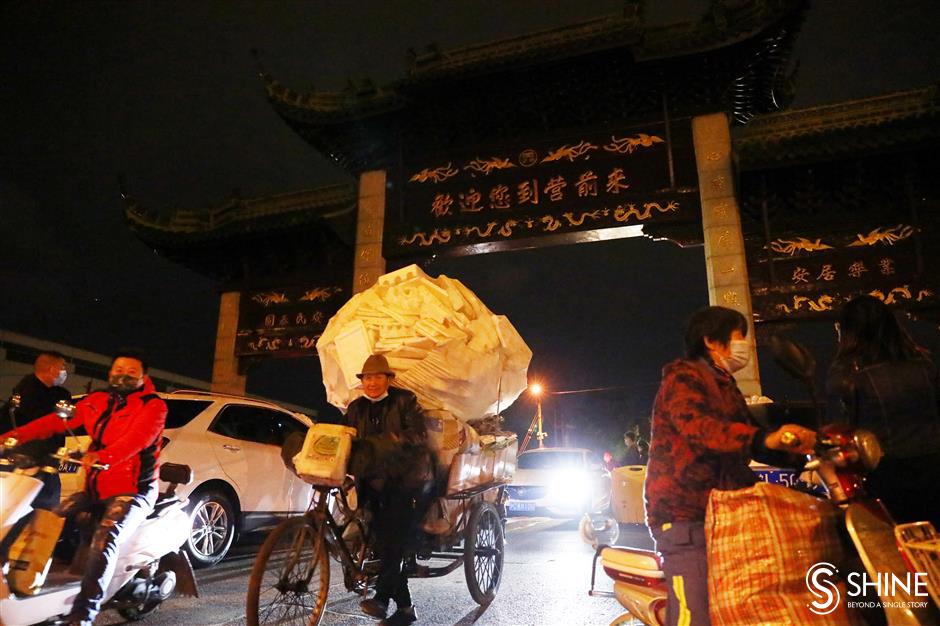 People living in Yingqian Village on the move after the end of their 14-day quarantine.

People, mopeds and cars were on the move as soon as the COVID-19 lockdown of Yingqian Village ended at 6pm on Monday.

The village, in Zhuqiao Town in the Pudong New Area, was rated a medium-risk area on November 9 after a porter from the village was confirmed infection.

At a press conference on Monday, the city government said the village would be downgraded to low from Tuesday as no locally transmitted COVID-19 cases had been reported for 14 consecutive days. But the village couldn’t wait to lift the lockdown.

Around 5:30pm, many people lined up behind the cordon line. At 5:58pm, the roadblocks were removed and they rushed out as if runners in a marathon.

Shi said she had rented a place in the village in May as she had been recruited as a truck driver by a local logistics company. It was her second experience of 14-day home quarantine, but she wasn’t worried or upset.

“I was so touched that over 14 days local volunteers and village workers sent every family fresh meat and vegetable every day, free of charge,” she said. “As soon as the lockdown was finished, I went out. I hope to tell others my experiences and tell them not to panic. We should believe our government.”

She said she had received three tests over 14 days. She will receive another on Tuesday at Pudong International Airport after she resumes work.

Zhu Cuiping and her husband, both workers at a logistics company, were excited. Finally, they could go home, take a bath and have a good sleep.

Zhu said her husband drove the truck into the village about two hours before the lockdown. They hadn’t expected it and thus had to squeeze in the truck for 14 days.

“We’ve suffered a loss of over 30,000 yuan (US$4,572). But fortunately, we left safe and sound,” she said. “The village provided us free meals three times a day. I really appreciated their work and kindness.”

Villager and volunteer Zhu Junmin said that over the 14 days she helped send meals to the couple and took them to use toilets in the village.

She followed others to walk out, but didn’t plan to go anywhere. “I just didn’t want to miss this moment. I may just walk around because I feel it’s much safer to stay in the village,” she said.

According to the village, there are nearly 3,000 households, and they have been granted access cards. People who don’t live in the village should carry their ID cards and negative test certificates within seven days to enter the village. 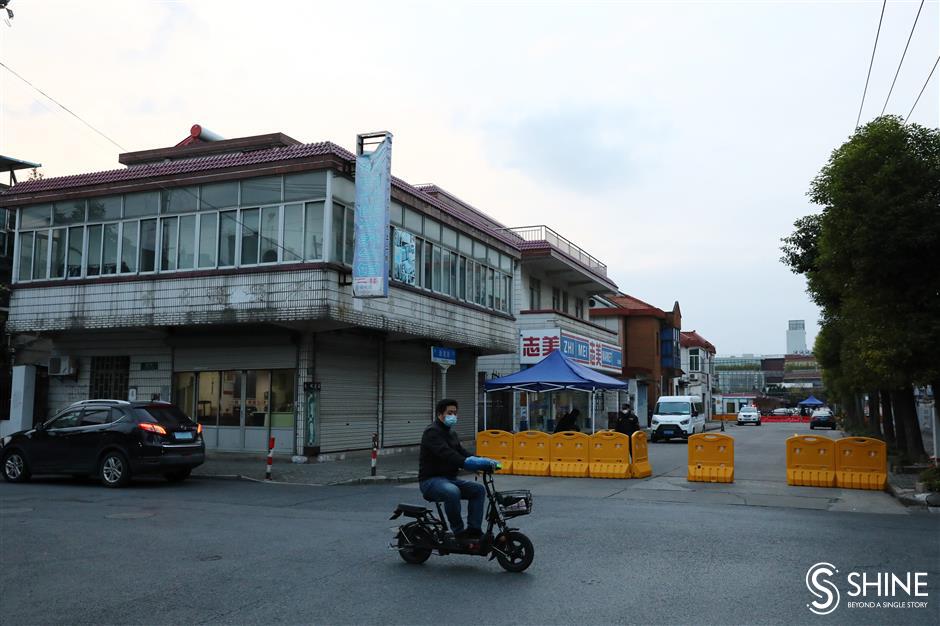 The first checkpoint at the Xinsheng residential complex is almost 100 meters from the second. 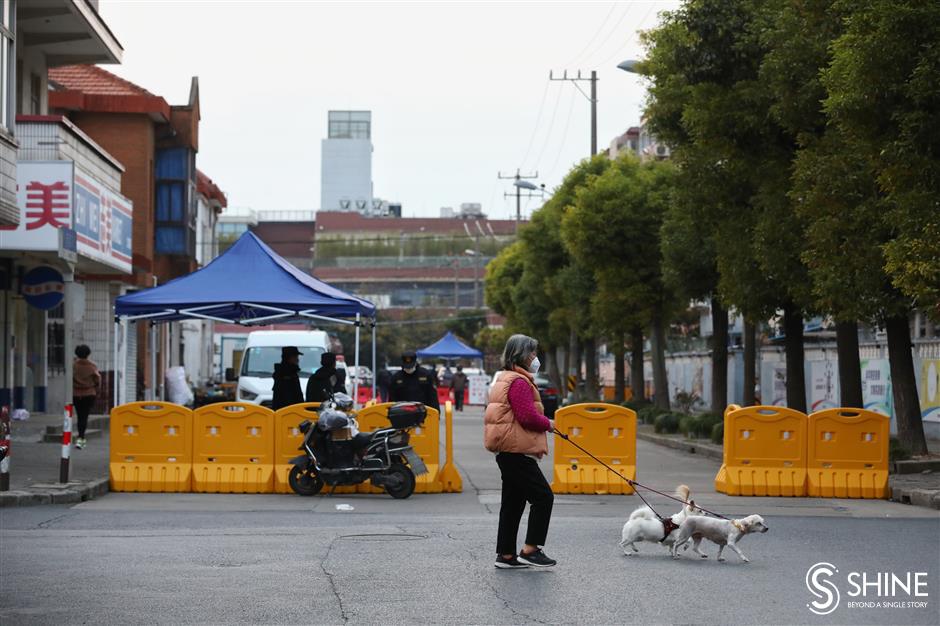 A resident walks her dogs past a checkpoint.

In Pudong, the other four places on the list of COVID-19 medium-risk areas for having confirmed cases are still under lockdown.

They are the Mingtianhuacheng residential complex in Zhoupu Town, Xinsheng and Lane 450 Hangcheng No. 7 Road in Zhuqiao Town, 126 Shunhe Road neighborhood in Zhangjiang Town.

Xinsheng has set up three checkpoints on the way leading to the community.

Only community workers and express deliverymen are allowed to pass the first checkpoint, which is about 100 meters away from the second one. Security guards are on duty.

A supermarket several meters behind the first checkpoint is still open, but only to community workers making purchases at the request of residents in quarantine, a neighborhood worker said.

A middle-aged man surnamed Wang lives in a small room of a bungalow in a narrow alley on the other side of the supermarket. He moved there more than a year ago.

He said he wasn’t worried about living so close to Xinsheng.

“I wear masks and gloves when I ride my moped. It’s necessary. And I ride toward the direction opposite to it, which I think is safe enough,” he said.

Wang, a cargo worker at Pudong International Airport, said he waited about four hours on Sunday evening to be tested for the virus.

“I guessed nearly 10,000 people received tests last night, and I returned home around midnight,” he said.

At work he often disinfects his hands with alcohol. He uses two masks, one in the morning and one in the afternoon, and never takes off his gloves during work. Every day, he’s required to have his temperature taken and show his health code.

“I’ve heard that the infected porter was working in another terminal. So, I’m not very worried about it,” he said.

An elderly woman living just several meters away said there was no need to panic.

“I remembered that early this year, every road around here was blocked. Today just one single residential complex was placed under lockdown,” she said. “I don’t feel any impact on my life.”

As usual, she walks her two dogs every day and even walks by the first Xinsheng checkpoint. 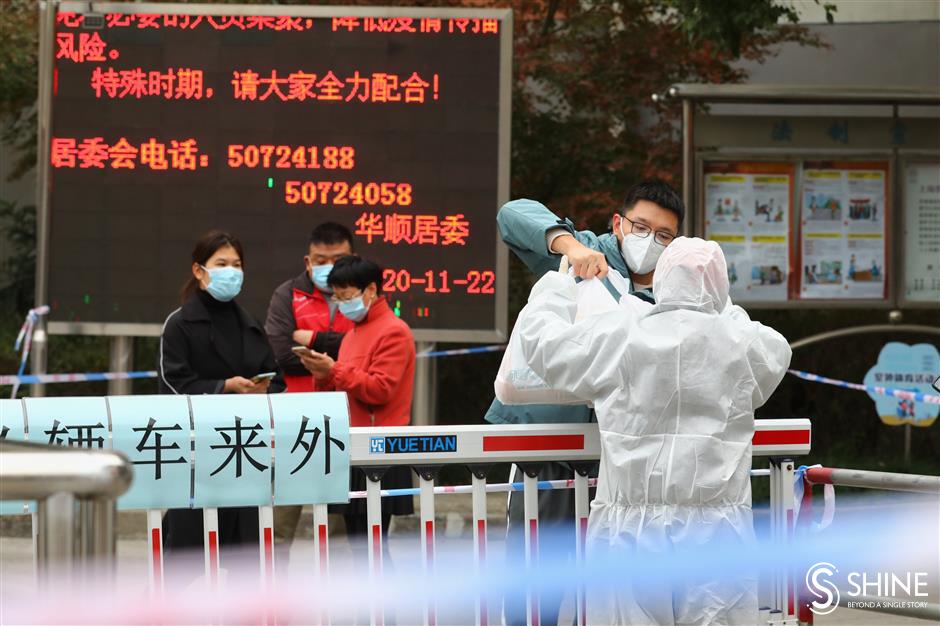 A volunteer in protective gear delivers a package to a resident. 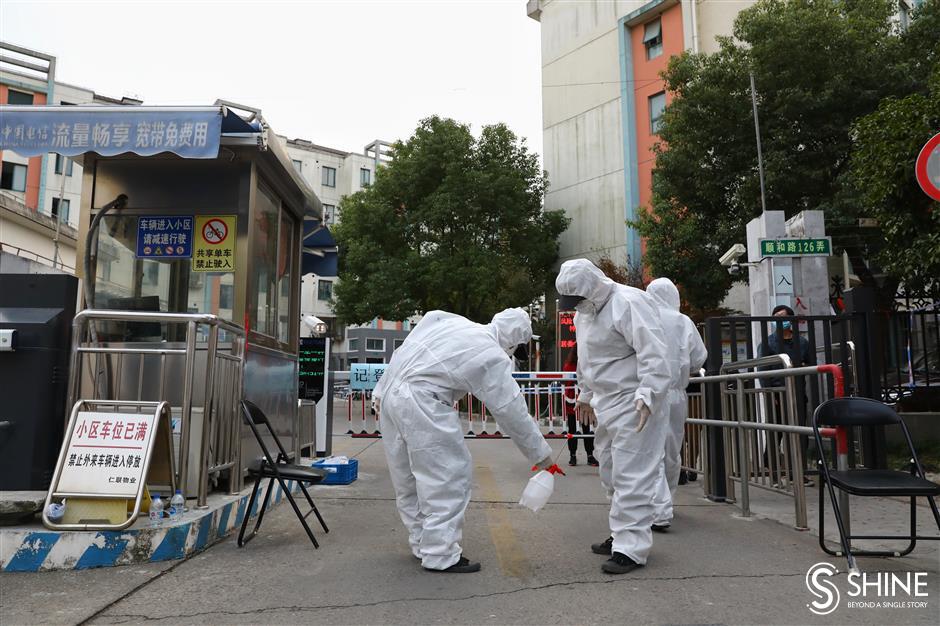 Outside the gate of the neighborhood in Zhangjiang, a cordon is in place.

More than 10 people in white protective outfits, including volunteers and security guards, were standing behind the cordon.

As residents are restricted in the neighborhood and deliverymen not allowed to cross the cordon, they help take parcels and food to residents.

Shelves and tents have been put up outside the neighborhood for express delivery goods.

Just across the road, neighborhood workers sit in or stand outside a makeshift office.

Two police officers were at the scene. One of them bought vermicelli for an elderly resident from a nearby supermarket as the resident couldn’t shop online.

One of the officers said it was not a big deal as it was his duty to serve the people, especially during the pandemic.

Local resident Zhang, 26, said they started to receive nucleic acid tests from Sunday afternoon. The neighborhood has sent people to disinfect public spaces and local families were disinfecting their own homes.

“I feel it’s safer at home. We don’t go out unless we need to take parcels or food. For the rest of the time, we just stay at home,” she said.