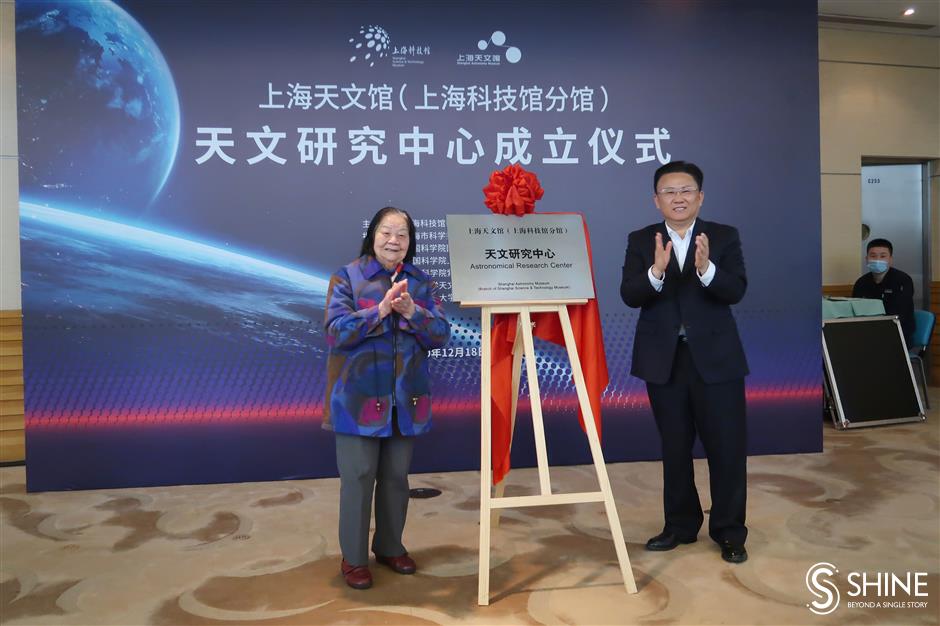 The under-construction Shanghai Astronomy Museum has set up an astronomical research center ahead of its grand opening in 2021.

Construction started in November 2016, and preset exhibition preparations are full steam ahead at the site in Lingang, the Pudong New Area.

It is due to be the largest planetarium in the world with a gross floor area of 38,164 square meters when it officially opens in 2021.

It is also the second branch of the Shanghai Science and Technology Museum, after the natural history museum, contributing to the formation of China’s only large-scale comprehensive science and technology museum cluster.

It has set up an astronomical research center and formed an expert committee. The 93-year-old astronomer, Ye Shuhua, was appointed as special adviser. Others advisors are from astronomical observatories and universities in China.

Ye, China’s first female observatory director who led the Shanghai Astronomical Observatory from 1981 to 1993, was among a number of scientists who proposed the construction of a planetarium in Shanghai.

“It’s far from enough for a planetarium to just display something like sun, earth, moon and stars," she said. "It should be a place attractive to all kinds of people, inspiring and enlightening every one coming in."

The planetarium will feature a main building and ancillary structures including a solar tower, an observation base and a public observatory.

Aimed at becoming a world-class planetarium, it will offer unprecedented museum experiences, backed by AI, AR and VR technology. It will bring people and the universe closer together.

The astronomical research center will use the planetarium’s observation apparatus, meteorites collection and other resources to lead the public to find the beauty of stars, astronomy and the universe, according to Wang Xiaoming, director of Shanghai Science and Technology Museum.

“The solar tower will help us join the Solar Joint Observing Programs and work with leading institutes to capture high-resolution images of the sun and detect solar activity," he said.

"A 1-meter-diameter telescope will facilitate research on time domain astronomy such as asteroid, supernova, blazer and exo-planet.

“Based on our meteorites collection, we will set up a meteorites lab, carry out research on cosmo-chemistry and launch education projects on meteorite identification and analysis.”