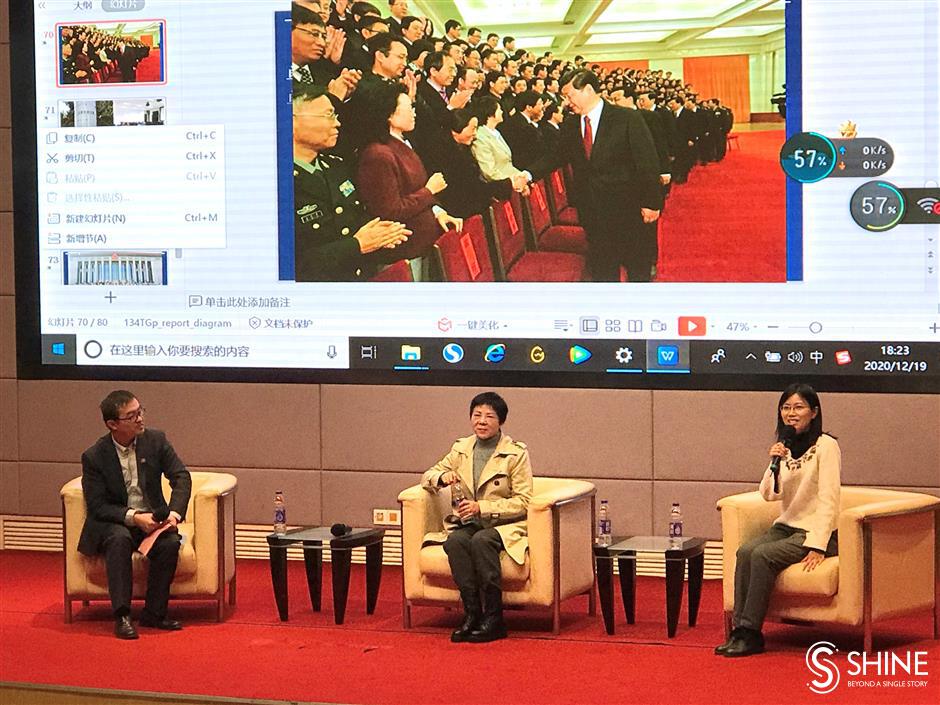 Zhang Yuhua (center), deputy chief commander of the Chang'e-5 project, talks about the success of the mission.

Lunar samples brought back by the Chang'e-5 probe will be going on display to the public, Zhang Yuhua, deputy chief commander of the project, said on Wednesday.

Chang'e-5 returned to Earth last week after a 23-day voyage, bringing back the world’s first lunar samples in 44 years, as well as China’s first. The samples, weighing 1,731 grams, will be used for scientific research, shared with international peers and exhibited to the public, said Zhang from the Shanghai Academy of Spaceflight Technology.

“The automatic sampling task is always very challenging. Before China, only the United States and the former Soviet Union had managed to dig and drill rocks and soil from the moon,” she during in a lecture at the Shanghai Science and Technology Museum.

The US brought back a total of 381.7 kilograms of lunar samples in six missions, while the former Soviet Union brought back 301 grams in three missions.

“Chang’e-5 drilled a 2-meter-deep hole and scooped nearly two kilograms of lunar material. From the video, we can see that the lunar soil is relatively soft and filled with pits,” she said.

The site had not been sampled before, and thus the samples had great scientific value, she said.

Research will be the most important task, but some of the samples will be exhibited to the public, Zhang said. “But it will not be so soon, and the public will not be allowed to touch them,” she added.

“There are more than 100 minerals on the moon, and five of them don’t exist on Earth. The moon has a large amount of Helium-3 which can be used in nuclear fusion,” Zhang said.

“China has launched deep space explorations starting from its Mars probe Tianwen,” she said. "There are also plans to explore asteroids in the future.”