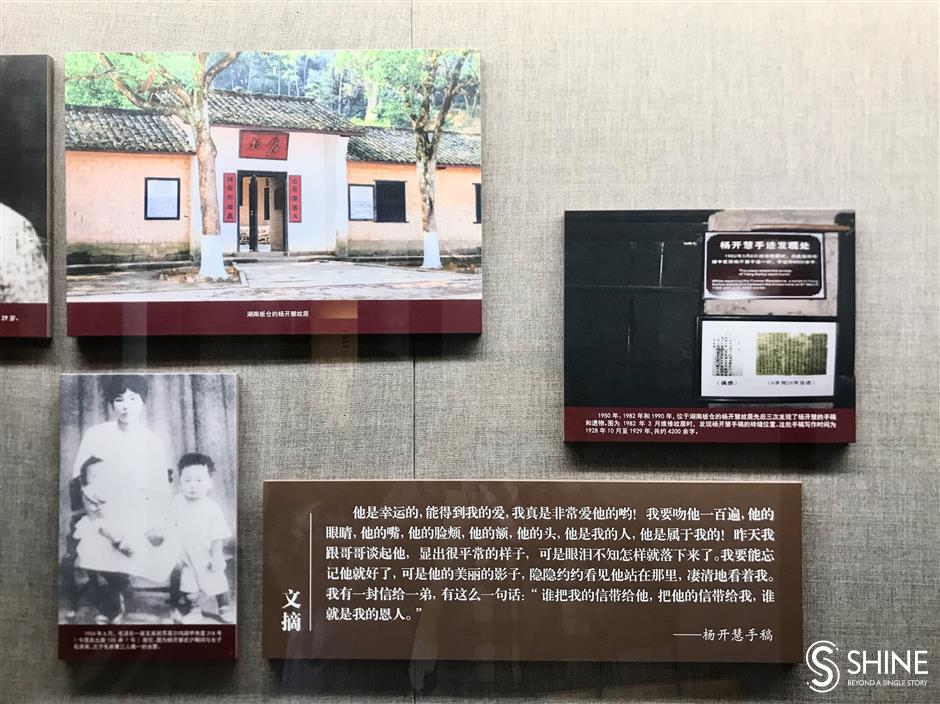 Manuscripts belonging to Yang Kaihui, wife of Mao Zedong, were found in cracks in her bedroom at her former residence in Hunan. 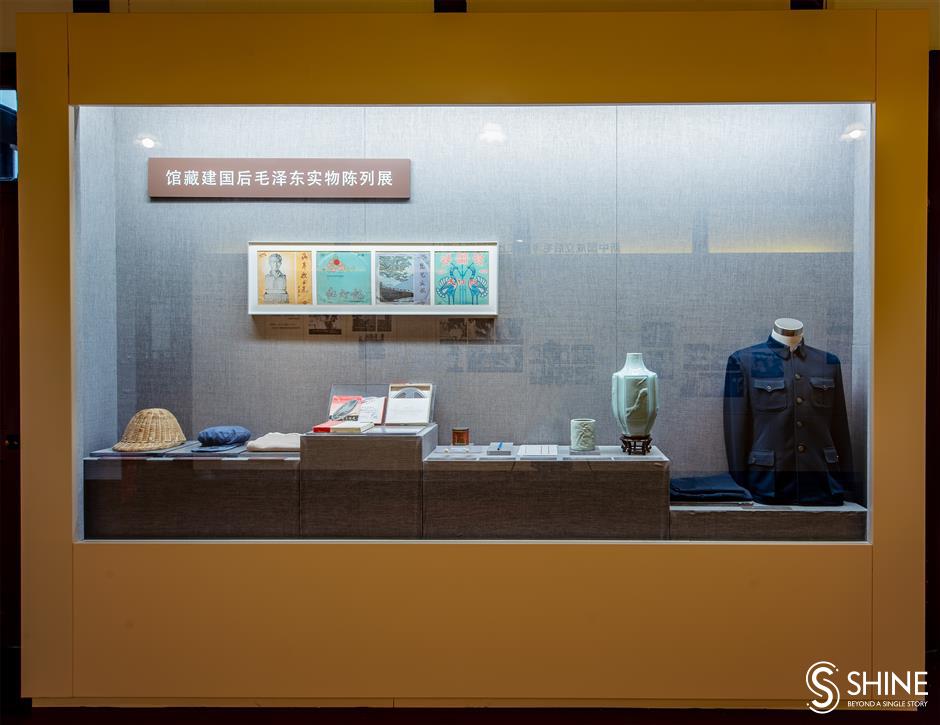 The former Shanghai home of Chairman Mao Zedong has refreshed its permanent collection to provide new insights for visitors and commemorate the 127th anniversary of his birth.

The site at 120 Maoming Road N. in Jing’an District used to be part of a traditional Shanghai shikumen (stone-gate) neighborhood called Jiaxiuli which was built in 1915.

It was where China's former leader lived with his family from June 1924 through the end of the year, his longest stay in the city.

The building first opened as a memorial to Mao in December 1999, though it was granted protected status by the city government as early as December 1977. It closed in December 2015 for a major facelift, and reopened to the public in January 2018.

Attendance has since been high.

It  launched a major refresh introducing 34 new exhibits ahead of Mao’s 127th birthday on Saturday.

New exhibits include an excerpt from a letter written to Mao by his wife Yang Kaihui, a pioneer in promoting women’s liberation. However, he never had the chance to read it.

It was among a collection of Yang’s manuscripts found in her former residence in Bancang in Hunan Province where she was arrested in October 1930. The next month, she was killed.

Yang wrote the letter 10 months before her death to express how deeply she loved and how dreadfully she missed Mao, as the couple had been living apart since August 1927 due to Mao’s work.

“He’s lucky to be loved by me. I love him so much. I want to kiss him a hundred times, from his eyes, his lips, his cheek, his forehead to his head. He’s my man. He belongs to me,” the letter read. “Who can send the letter to him and send his letter to me? Anyone who’s able to do it is my savior.” 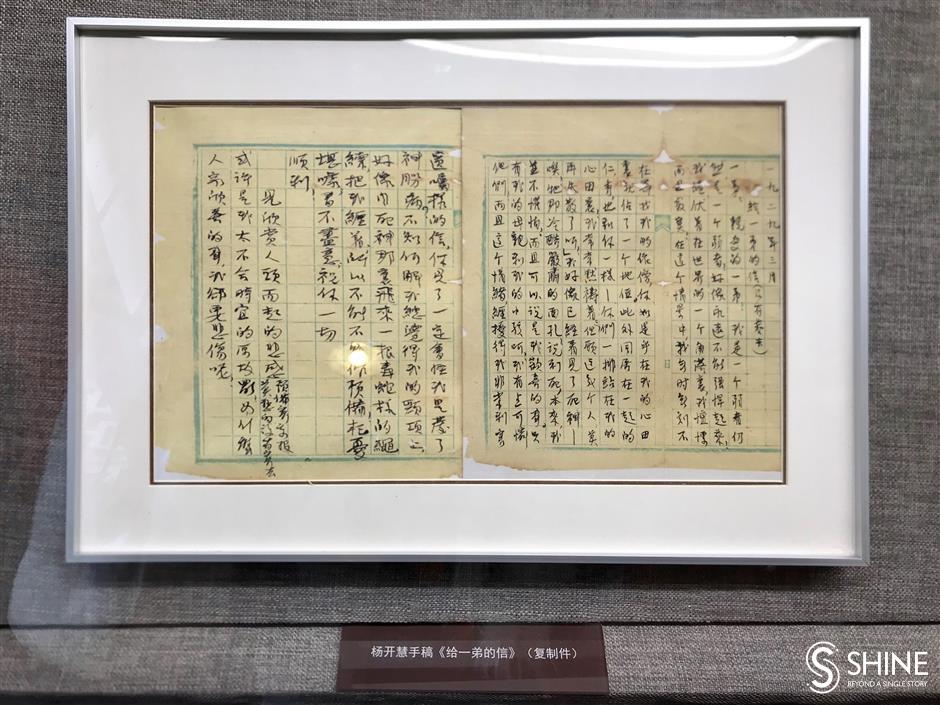 A copy of a letter written by Yang to her cousin Yang Kaiming.

The new exhibits also include a copy of a letter written by Yang to her cousin Yang Kaiming after she learnt that the wife of legendary Chinese general Zhu De had been beheaded. Since then, she was overshadowed by an uneasy sense of foreboding.

“I’m not afraid of death. But I pity my mother and my children. I decide to leave my children to you,” the letter read. “You must think that I’m psycho when you read it. But for no reason I always feel that a rope from death, like a serpent, is coiling on my neck. I have to be ready for it.”

A local farmer found a number of manuscripts by accident after digging out a porcelain jar in the courtyard of the house. However, the documents went missing. What we have now were found in cracks in her bedroom in two rounds of renovation in 1982 and 1990.

The six-month stay in Jiaxiuli was a rare moment of reunion of Mao’s family. There, it was common for Mao to work at his desk past midnight while Yang copied documents. His mother Xiang Zhenxi took care of Mao’s two young sons, Mao Anying and Mao Anqing.

While here, Yang and her two sons appeared in a photo, the only preserved photo of them. Mao wasn’t in the picture because he strictly followed Party rules that Party leaders couldn’t appear in photos.

It became his lifelong regret as Yang was killed at a young age, so they never had the chance to take a family photo. Yang was one of six family members who sacrificed their lives for revolution. 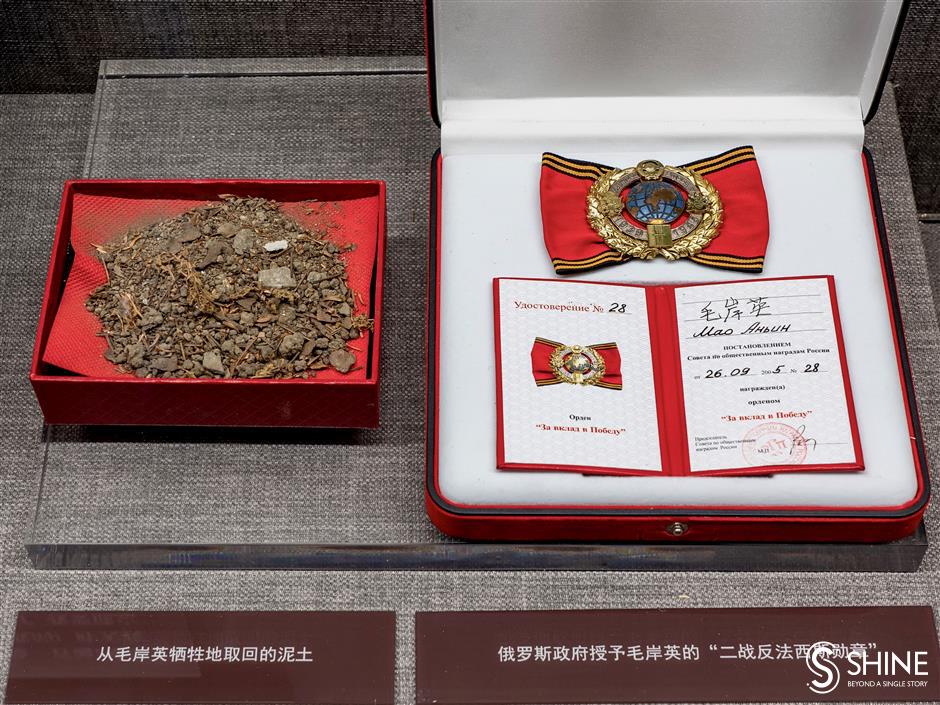 A handful of soil scooped from where Mao Anqing died and a medal presented by the Russian government to honor his valor.

The other five were his two brothers Mao Zemin and Mao Zetan, his sister Mao Zejian, his nephew Mao Chuxiong and his son Mao Anying.

Mao Anying was killed in 1950 in an air strike during the Korean War. A handful of soil scooped from where he died, and a medal presented by Russian government to honor his valor are among new exhibits.

The memorial has also set up a souvenir store selling creative products based on local “red" history, such as bookmarks printed with Jing’an’s “red” sites and silk kerchiefs designed in construction elements of Jiaxiuli.

Jing’an-based Longfeng, one of Shanghai’s most renowned cheongsam makers which opened in 1936, has combined elements of its well-known pankou (frog fasteners) and peony-shaped window lattices of Jiaxiuli to design a bookmark. It has been recognized by the city as this year’s best specialty products. 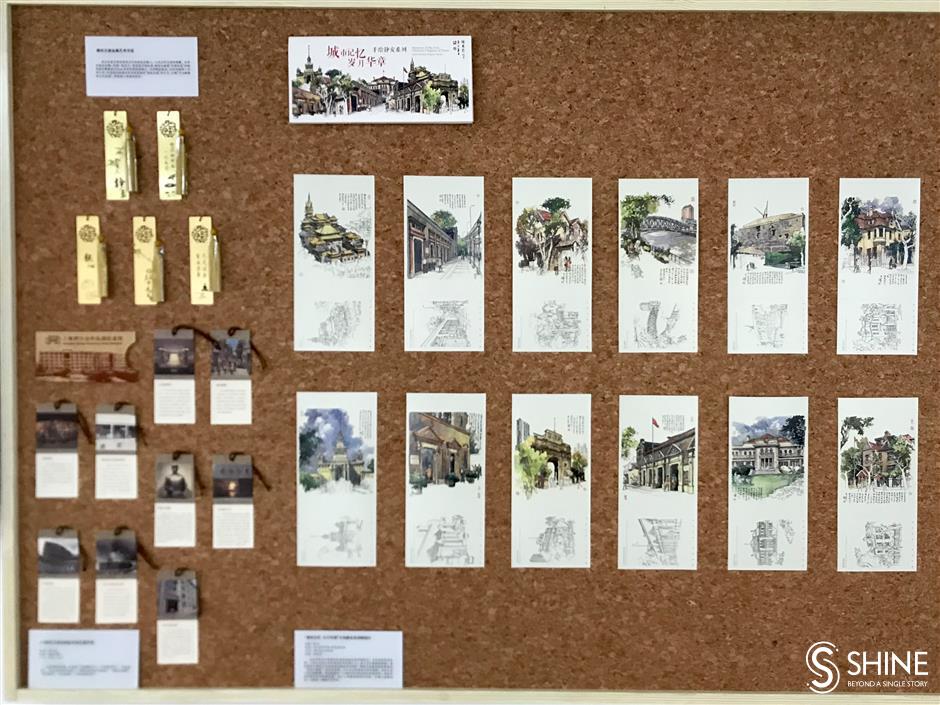 Bookmarks of Jing'an's historical sites are among souvenirs sold at the newly-established gift shop.