Policy to reduce plastic waste is in the bag 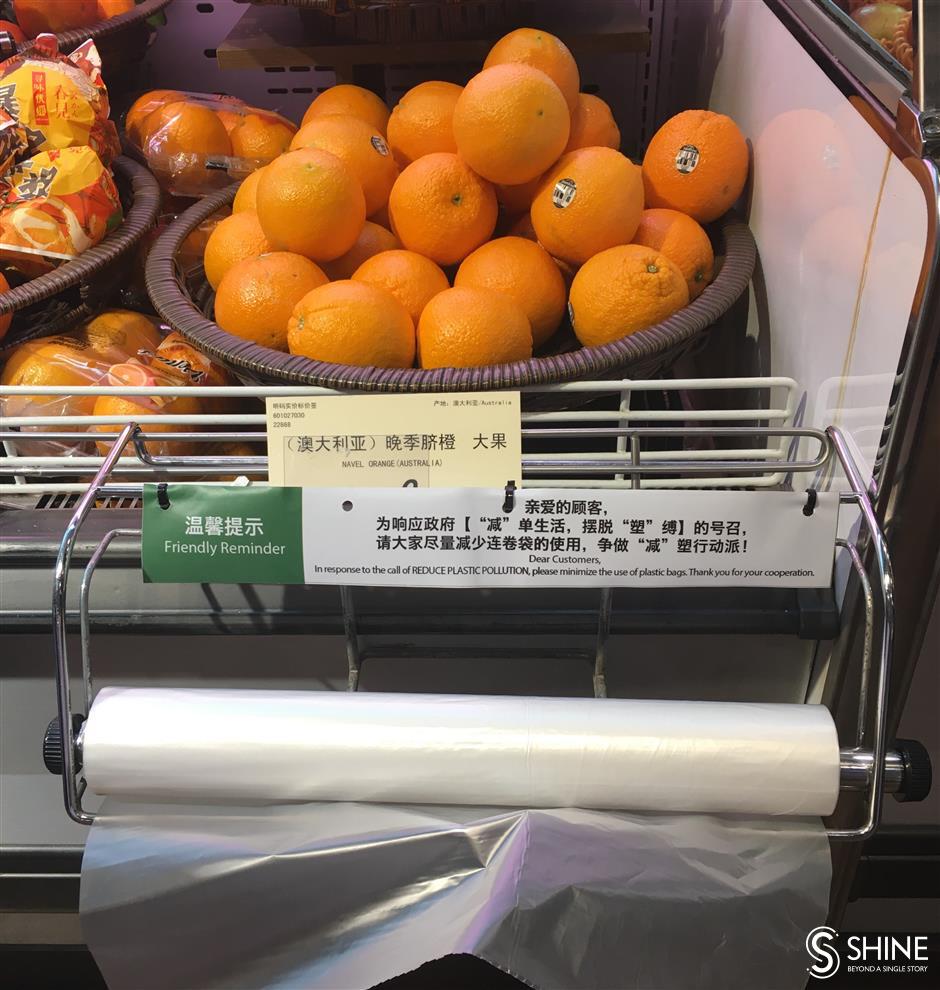 A reminder about minimizing the use of plastic bags at a City'super in Huangpu District.

Disposable plastic bags, whether degradable or not, will be banned in the city’s shopping malls, supermarkets, pharmacies and bookstores from Friday.

Many companies and stores started to comply with the new policy released by 10 local departments, including the development and reform commission and ecology and environment bureau, in September.

The city has focused on the plastic issue, and launched related policies since 2008. The new regulations are stricter than the latest nation’s issued in January, which state that degradable plastic bags are allowed in all places for a number of years. 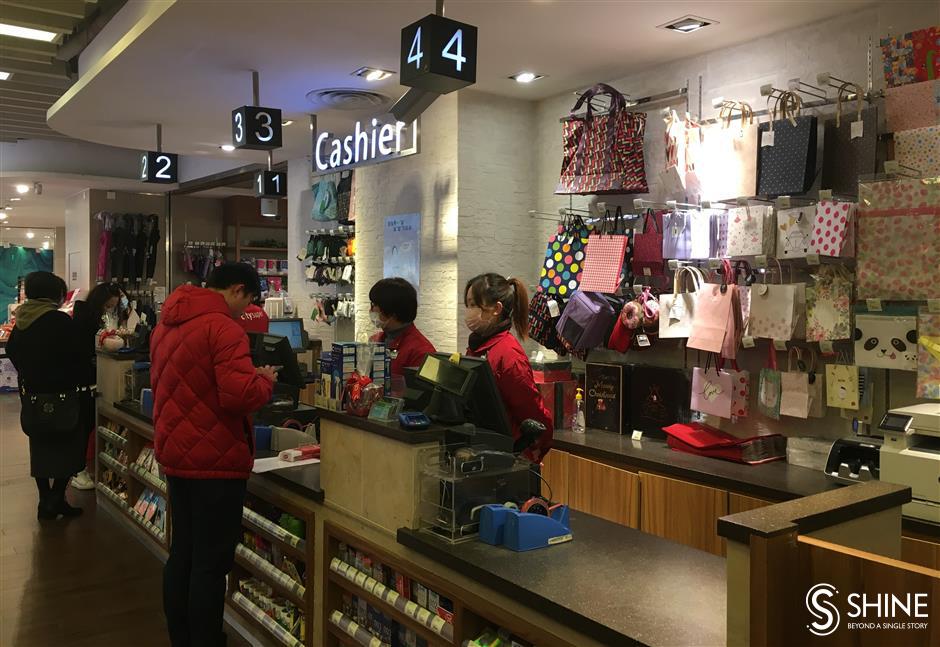 Paper bags and cloth bags are displayed at the cashier in the City'super in Huangpu District.

The City’super on Huaihai Road M., a supermarket mainly for imported products, has hung cloth bags and paper bags near the cashier. Each is around 24 yuan (US$3.7) and 40 yuan. The prices are more expensive than the non-degradable plastic bags, around 0.5 yuan each.

The Shanghai-based NGS supermarket on Nanchang Road, mainly for domestic items, will remove all shopping bags, not just plastic bags but also recyclable ones, a shop assistant said.

“Many people have taken bags or dollies since the policy for reducing the use of plastic products was issued 12 years ago,” she said.

She added that they will also control the use of those for fresh vegetables and fruits, though they are not on the banned list.

A similar answer was heard from Carrefour China. It encourages consumers to take their own bags to promote the use of recyclable bags. 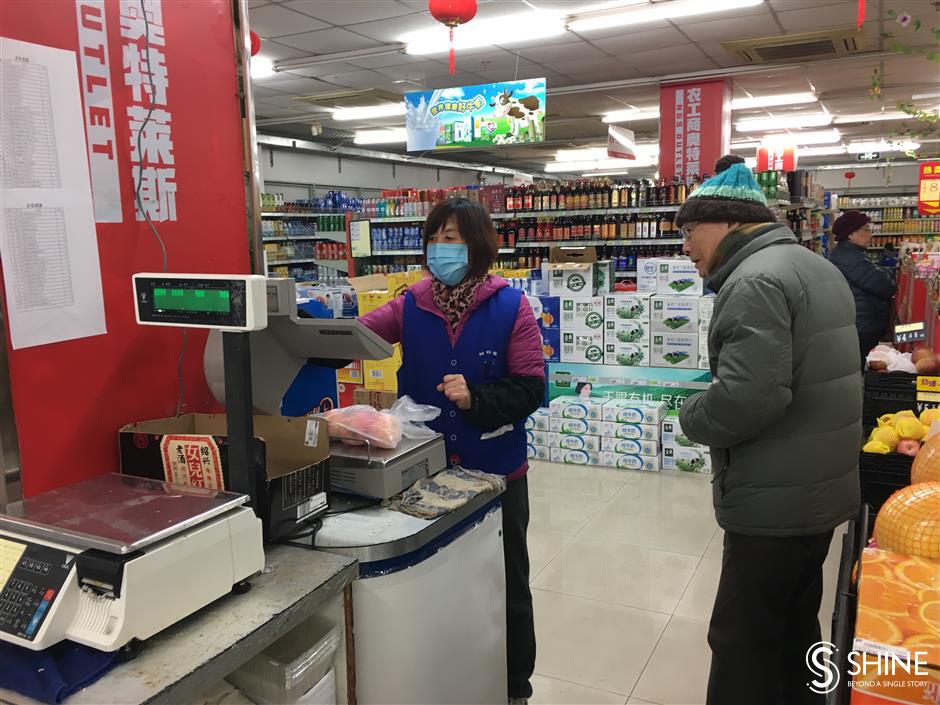 A shop assistant weighs apples in a plastic bag at the NGS supermarket.

At a FamilyMart outlet in Jing'an District, a cashier told Shanghai Daily that it uses recyclable bags instead of plastic ones, which cost 0.6 yuan each.

"It is expensive compared with 0.2 yuan each in the past," a white-collar worker named Li Jing who purchased a bento box said. "But it is understandable."

She said she would bring her own bags next time.

Restaurants and snack bars also have prepared for this change.

At an outlet of KFC in the People's Square area, paper bags were seen being used for most take-away food.

KFC China said it will fully stop the use of plastic straws at about 6,900 outlets nationwide from January, and replace plastic bags for take-away food with degradable ones at about 3,800 outlets.

It is estimated that the practice will cut the use of more than 7,000 tons of plastics which are not degradable per year at its restaurants nationwide from next year, it said. 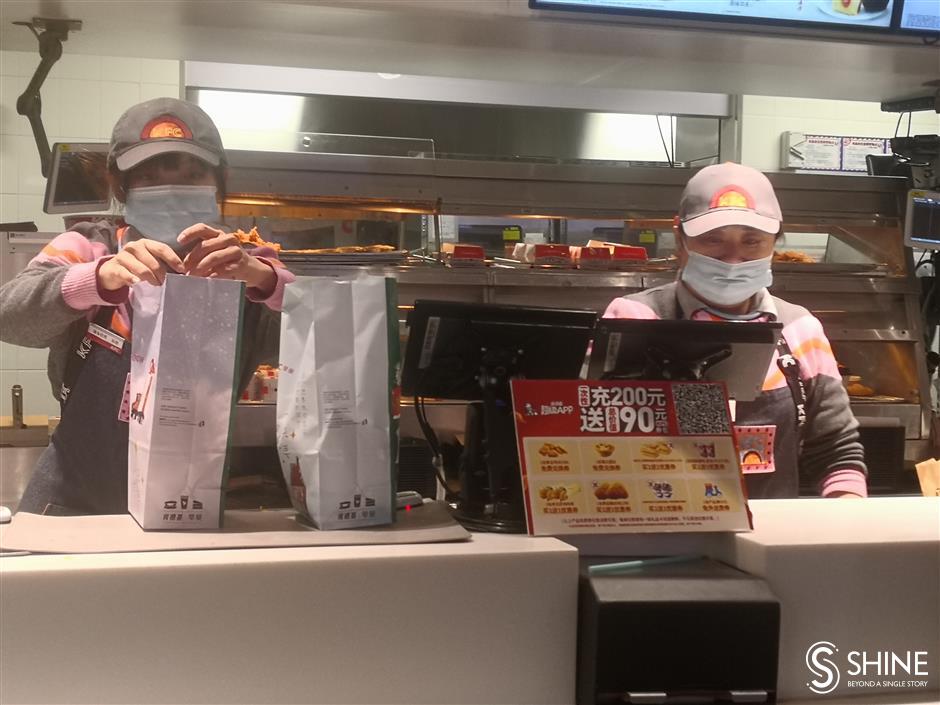 Food is packed in paper bags at a KFC outlet at People's Square.

Domino's Pizza said it will use recyclable packages at more than 360 outlets nationwide from January, which includes replacing plastic bags for take-away food with degradable ones, and replacing disposable plastic dishware with wooden items.

The use of plastic straws will be fully suspended, and paper straws or cup lids enabling diners to drink directly will be promoted, it said.

It has also enabled those who order food online to tick whether they need dishware or not to cut the use of disposable dishware.

A staff member at the popular milk tea brand Yidiandian (A Little Tea) on Xizang Road S. also told Shanghai Daily that plastic bags will be replaced by the recyclable one but the material is unclear.

“All straws will be degradable soon," the staff member said.

The local regulations also stated that by 2021, production and sale of  disposable tableware made of polyfoam and cotton swabs will be halted. Chemical products with microbeads will be banned starting from Friday.

The sticks of all cotton swabs sold in NGS are made from wood or bamboo now, and there is only one type of disposable bowl and it is recyclable.

In the City’super, the polyfoam bowl is on sale, the price declining from 15 yuan to 5 yuan, but the assistant said there is no more information from the supermarket about when it will be off the shelves. 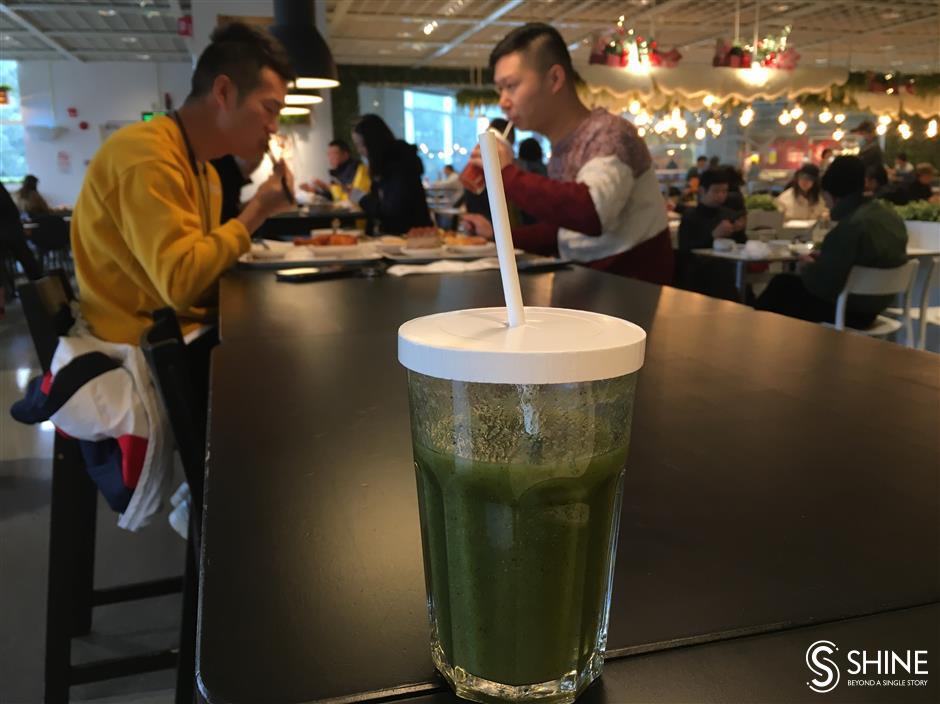 Paper straws and covers are used in IKEA in Xuhui District.

During recent years, an increasing number of leading companies have taken part in the fight for environmental protection.

Recyclable straws have been used in the local Starbucks, Costa and IKEA for  one or two years, although there have been some complaints with people saying they are easily broken because of the water-absorbing quality. McDonald's and KFC have been trying to get rid of the straws by launching the recyclable strawless sipping lids for cold drinks.

The postal and delivery service will get rid of non-degradable plastic bags and tape over the next few years.