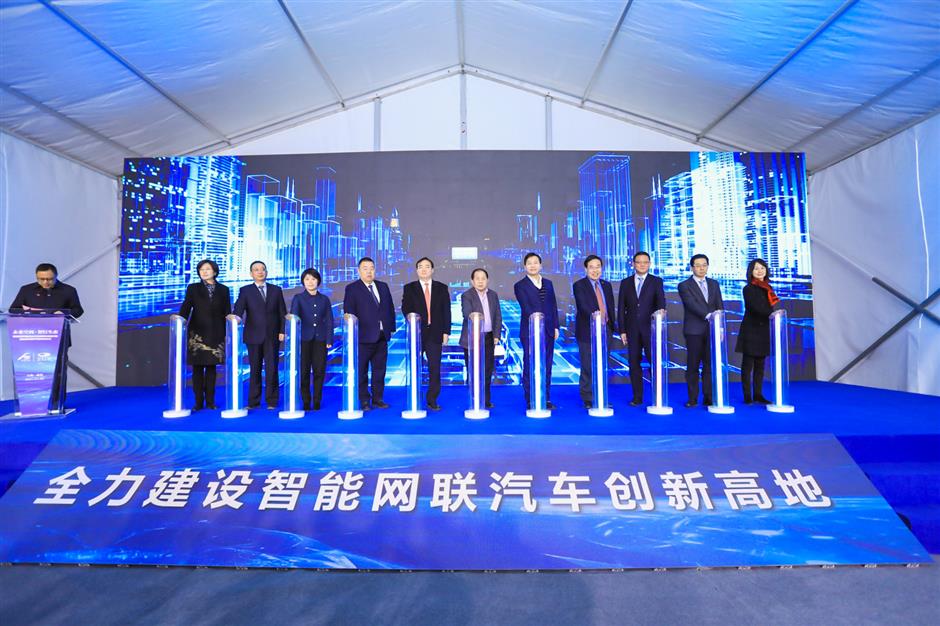 Jointly developed by the Fengxian government, Lingang Group and Shanghai Jiao Tong University, the pilot zone includes 7.8 kilometers of open roads, 960 meters of inner roads within parks, along with 1.11 kilometers of underground roads in parking garages.

It is the nation’s first open self-driving testing area covering every aspect of traffic, and is expected to meet the demands of people’s “last kilometer” travel, according to the district government.

More than 30 projects, with a total investment of 20 billion yuan (US$3.1 billion), signed agreements to launch their autonomous driving projects in the newly unveiled zone on Saturday. It is estimated they will create a total industrial value of up to 50 billion yuan.

In a highlighted project, Baidu has signed to develop its self-driving project Apollo in Fengxian. Testing of the unmanned bus will soon be launched. 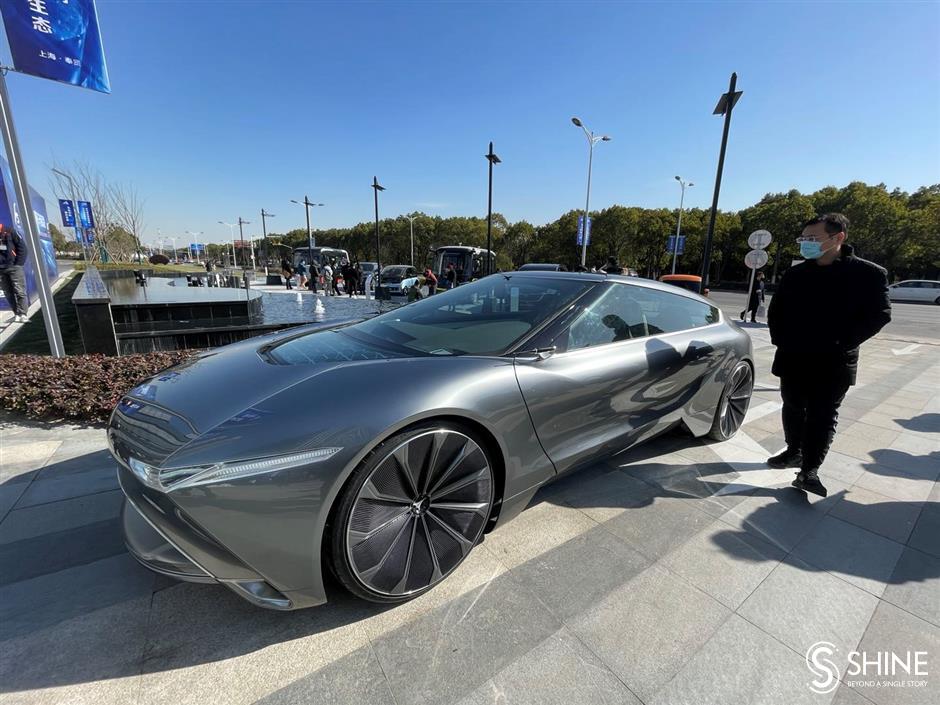 A self-driving concept vehicle on display at the sideline of the launching ceremony of the testing zone.

Apollo will explore self-driving applications in the public transport sector in Fengxian’s Nanqiao Town. It will help the district create "a highland in talent, technology and industrial ecology for the intelligent network," said Zhang Dongchen, vice president of the Baidu Group.

Other leading automakers such as SAIC-GM, Ford, Weltmeister and AIWAYS also signed to invest in the zone.

“The development of V2X, or vehicle-to-everything, has just begun in China, so there are few open roads for us to test autonomous driving,” Wang Chendong, an official with SAIC-GM, said. “The new zone offers us a chance to test our mass-produced self-driving vehicles."

“With the fast pace in Shanghai, I think (the autonomous driving) will be there quite soon,” Colombo said.

Shanghai has set up a handful of intelligent network vehicle hubs in Fengxian and Jiading districts as well as Lingang and Jinqiao in Pudong with leading standards, said Wu Jincheng, director of the Shanghai Commission of Economy and Information.

Compared with the others, the new testing zone in Fengxian focuses on the smart connections between vehicles and roads, said Yin Chengliang, president of Shanghai Intelligent and Connected Vehicle R&D Center Co, operator of the zone in Fengxian. 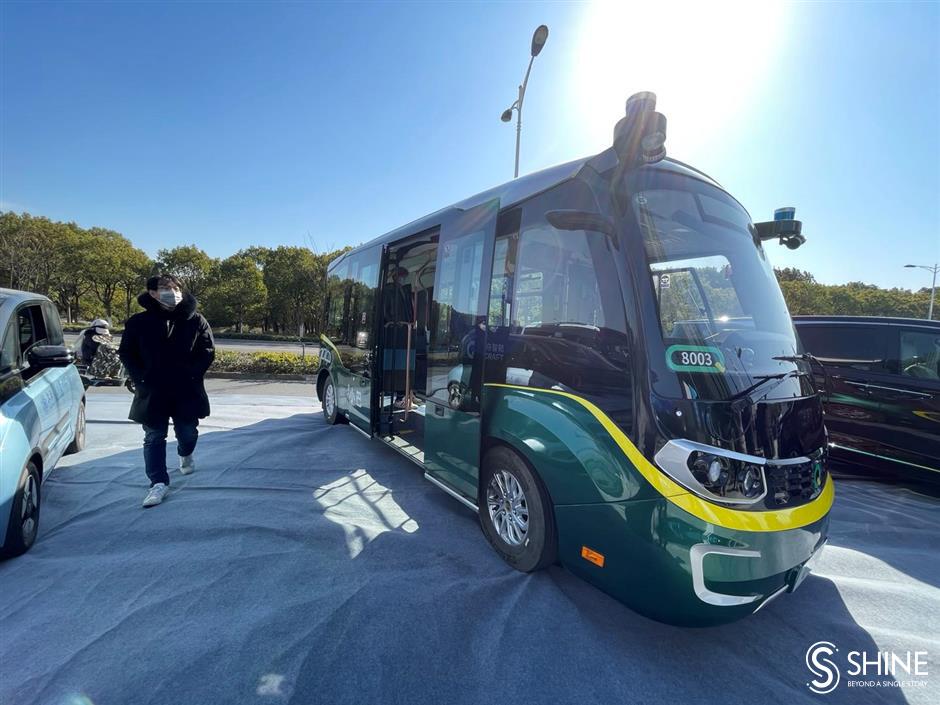 An autonomous driving bus on display at the newly launched testing zone. 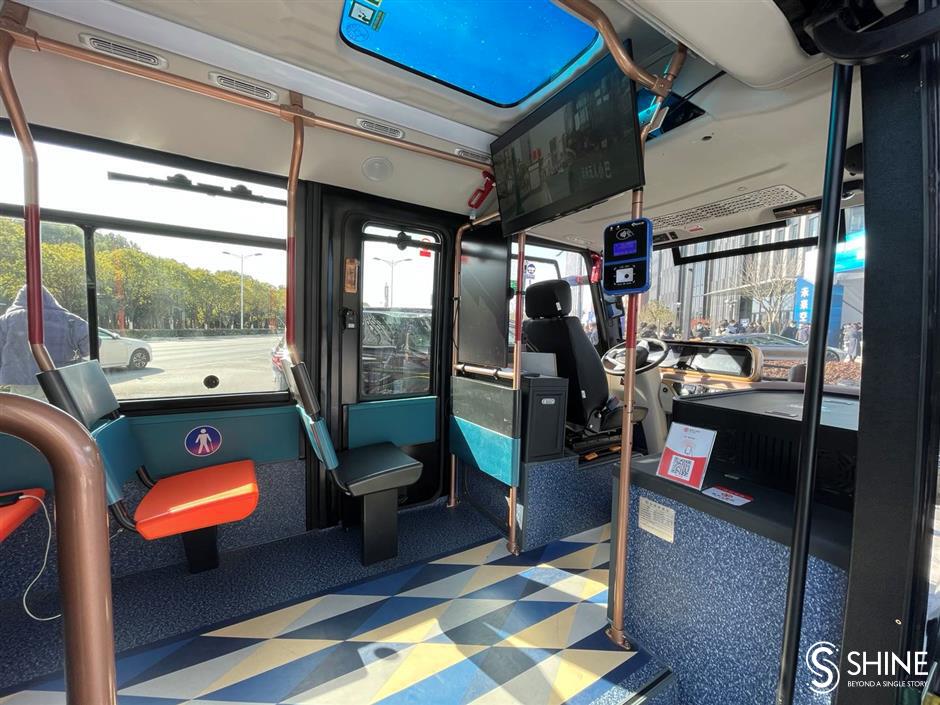 The interior of the self-driving bus.

It is the first time that underground roads and self-parking have been developed for a testing zone in Shanghai.

“Various sensors are installed on the roads and surrounding areas to guide the self-driving vehicles through 5G communication technology,” Yin said.

The technology has largely reduced the cost of autonomous driving. The costly radars installed on self-driving vehicles can be replaced by cheaper sensors, which offer broader commercial applications in future, Yin said.

“No additional facilities need to be installed on some newly launched vehicles," he said. "Autonomous driving can be realized with only software and algorithm upgrades."

China is aiming for vehicles with at least partial self-driving technology to comprise 50 percent of new car sales by 2025, doubling its previous goal. Chinese and multinational carmakers are trying to offer rides to ordinary people to test the new technology and ease anxieties about safety.

To meet the ambition, construction has started on the second phase of the testing zone in Fengxian with a total of 87.5 kilometers of open roads for self-driving testing, said Xu Jianlong, Party secretary of the district’s economic commission. 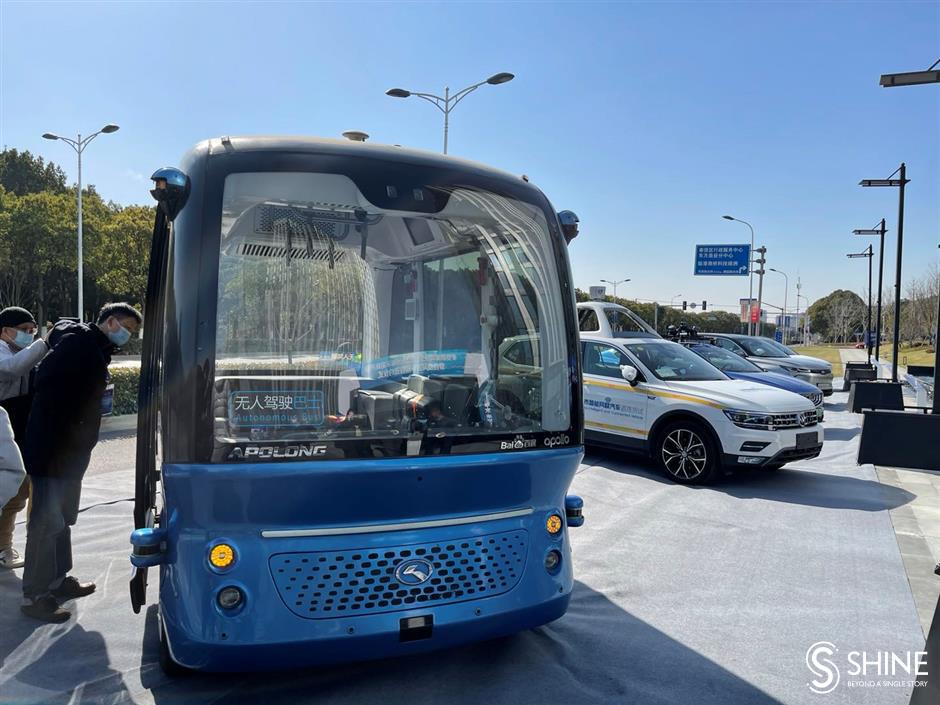