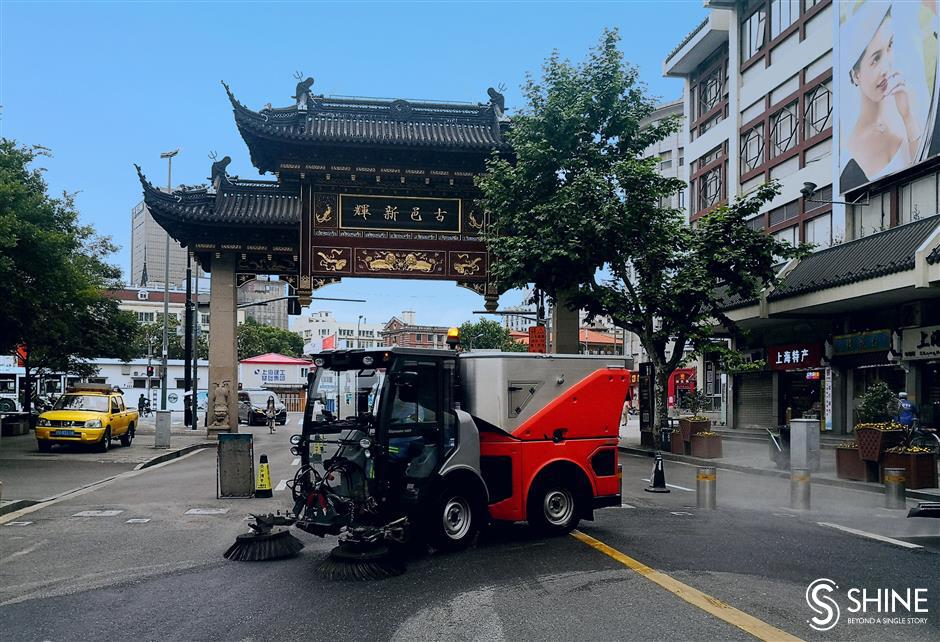 A street cleaner tidies a road in the Yuyuan Garden area of Huangpu District.

Local authorities released today the results of a public satisfaction survey on Shanghai's sanitation during the second half of 2020 and parking at residential complexes was last among 39 indexes.

Overall, the city's public sanitation and environment scored 81.04, or good, in the last six months of 2020 — compared with 80.98 in the first half of the year — up 0.19 from the same period in 2019, according to the Shanghai Greenery and Public Sanitation Bureau.

The evaluation covered 220 subdistricts, towns, villages and industrial areas in all its 16 districts.

For the first time, all 13 ranked categories were rated "good" based on the city's evaluation, with six improving since the first half of last year.

All of the city's downtown districts were good in all 13 categories.

However, the city's suburban districts only received good ratings in the environment of residential complexes and water areas, scoring OK in the other categories.

Thirty-eight subdistricts, towns and villages, such as Jing'an Temple, Chengjiaqiao and Nanjing Road W. subdistricts in the city's downtown and Hengsha Village, Shuyuan Town and Yuepu Town in the outskirts were rated excellent.

Fourteen were rated "so so" with Jinhui Town, Zhujing Town and Luxiang Town at the bottom of the list among the 220 subdistricts, towns, villages and industrial areas.

The public sanitation and environment of the People's Square area had the highest score (95.91), followed by areas around the two airports, while the Wujiaochang area in Yangpu District had the lowest score (86.35).