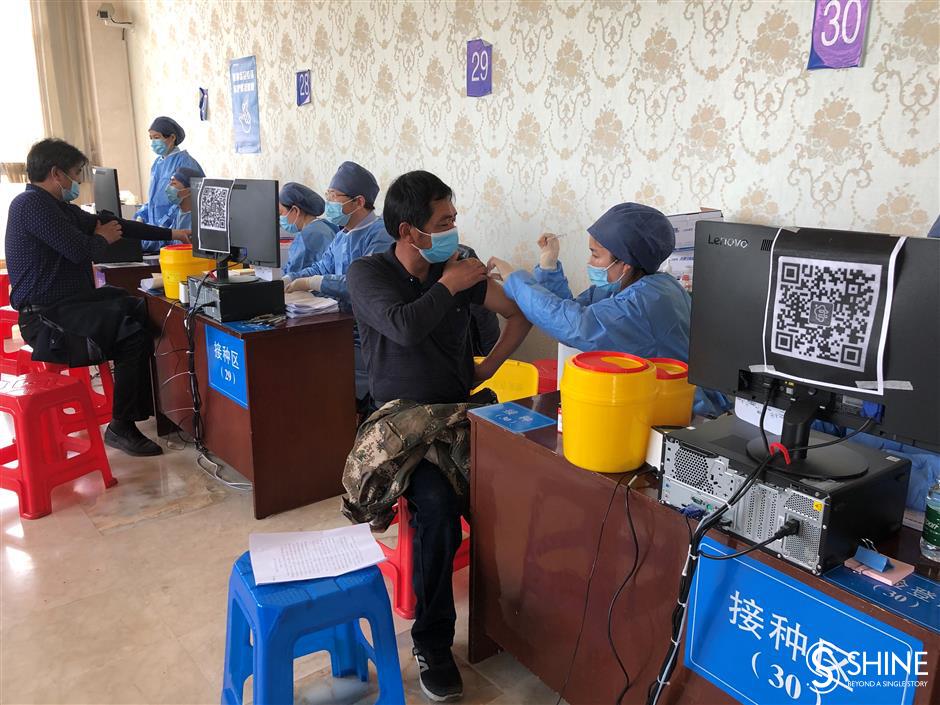 Residents have their COVID-19 vaccinations in a temporary venue in Chongming District on Thursday.

More than 402,000 adults in Chongming District will have been vaccinated before the end of April, Cai Zhichang, deputy director of the district’s COVID-19 treatment team, said on Thursday.

To ensure the safety of visitors to the 10th China Flower Expo in the district from May 21 to July 2, over 10,000 workers and volunteers will have their first shot before the end of this month and their second after 14 days, said Shi Jianhua who is charge of medical treatment and pandemic prevention for the expo. 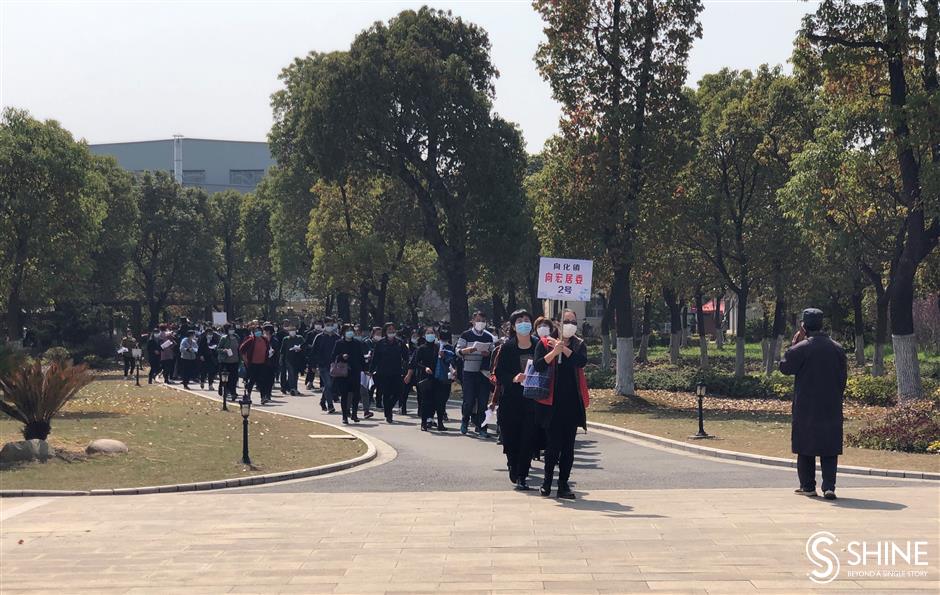 People, guided by village officials, line up outside the vaccination venue in Chongming District on Thursday.

Two community health centers provide services for people going aboard and an industrial park and a gym have become two temporary venues for other residents.

Around 60 medical workers are at the venue. There are around 20 rooms for people to stay for 30 minutes after their injections for observation, while there’s an emergency room and an ambulance on standby.

"Around 10 people come to the emergency room every day for counseling and treatment," a doctor surnamed Qiu said. "They had light adverse reactions caused by the psychological pressure and returned to normal soon." 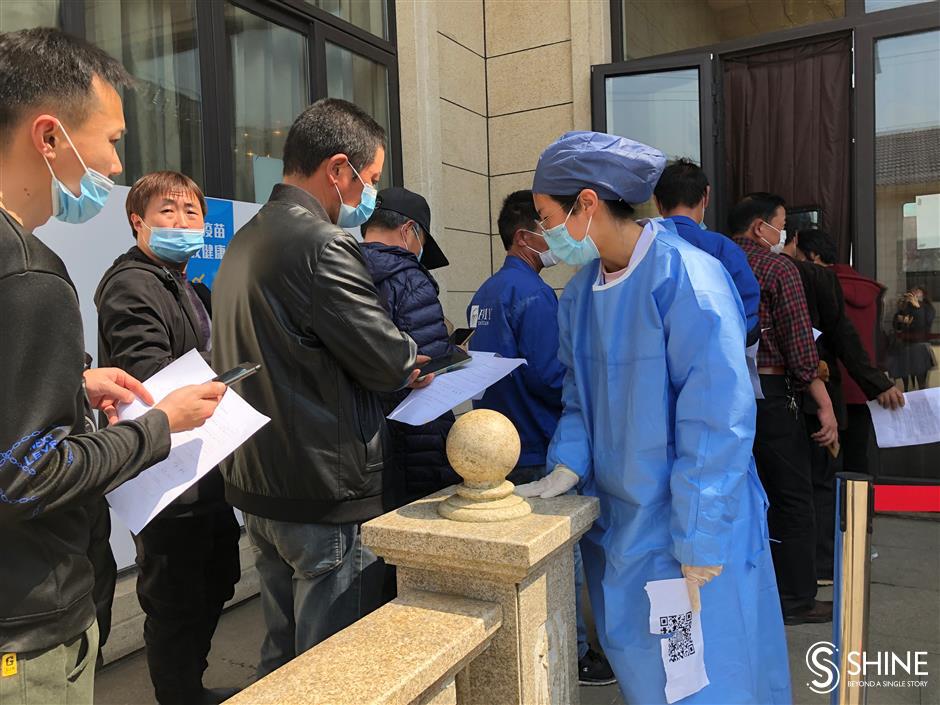 A medical worker checks the registration information of people waiting to be vaccinated in Chongming District on Thursday.

A 45-year-old woman surnamed Ma had her first injection on Thursday. She lives in Chengqiao Town in the district with her husband who is a driver and her daughter who is a nurse. Ma's family members had their two shots recently.

“I know the vaccine well through my daughter and my family felt good after the vaccination so I am not afraid,” Ma said. “My relatives in Anhui Province said they want to take the shot as well after hearing we have been or will be injected.”

Over 20,000 doses will be given daily soon and more health centers for vaccinations in the district will open to the public, Cai said. 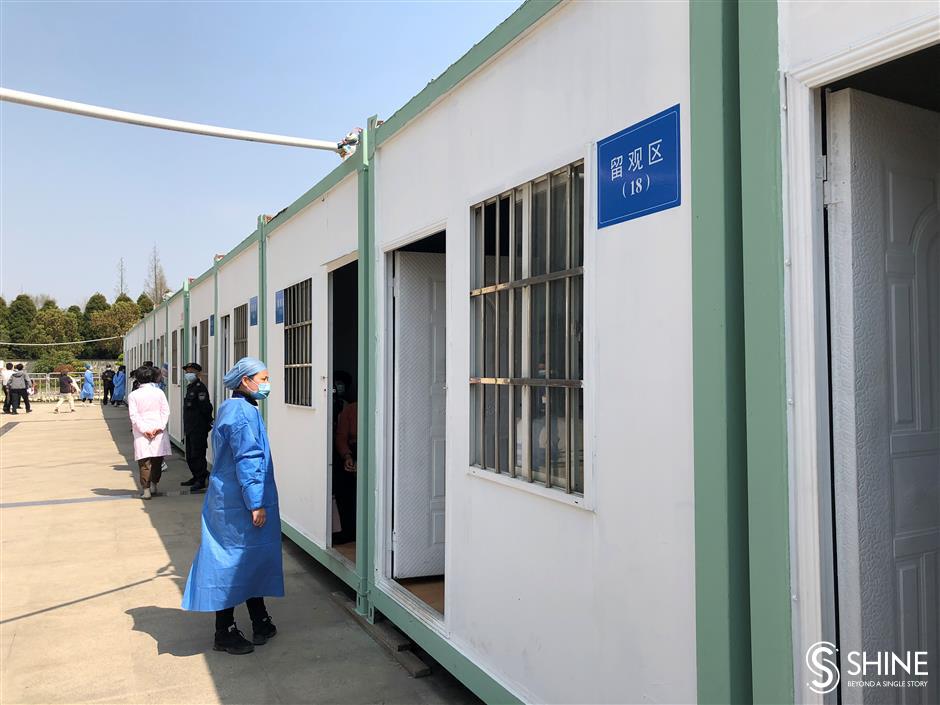 Rooms for medical observation after people have been vaccinated are monitored by staff.

Thursday is the first day that the COVID-19 vaccination is available for the city’s senior citizens.

Under the guidance of subdistrict officials, 150 people were injected at the Huamu Community Health Service Center in the Pudong New Area.

Nine people can be injected at any one time at the center and volunteers accompany them throughout the process. Two family doctors are available for counseling.

Hot water and snacks are in the room for medical observation after the injections.

Around 30,000 elderly people will have the jab in the center before the end of April.