It's fair to say that jobs fair is a success 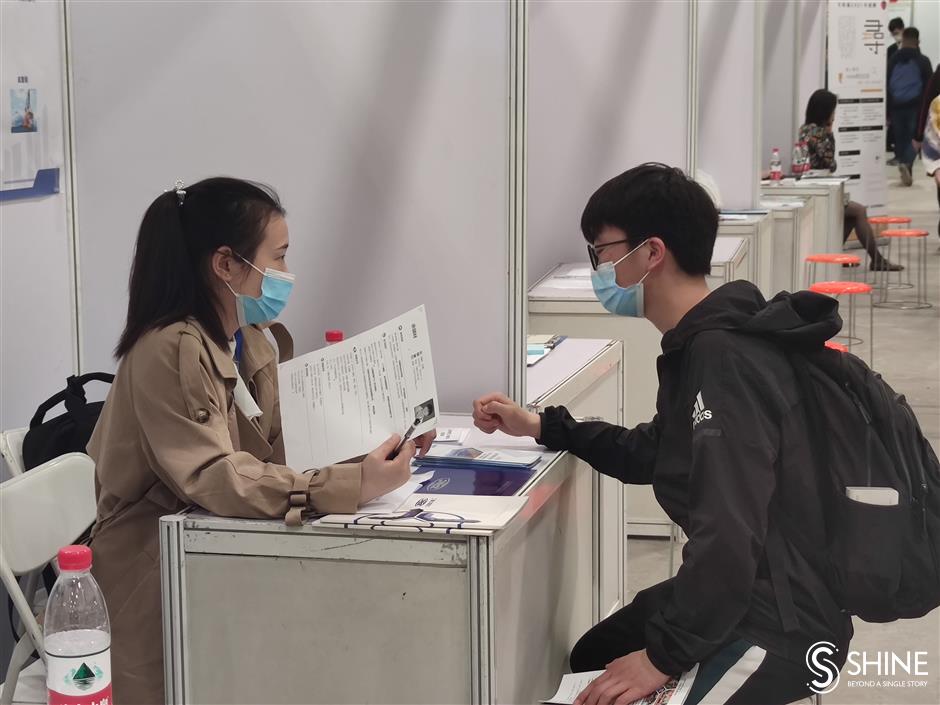 A student interviews for a position.

Some 950 employers from the Yangtze River Delta region offered 22,172 posts to college graduates at a job fair in Shanghai on Sunday.

It was the largest jointly organized event by human resources and educational authorities in the region since the outbreak of the COVID-19 pandemic.

They received a total of 4,198 resumes, and 1,906 applicants received offers.

“The employment situation is better than the same period last year,” said Ding Feng, director of the city’s talent service center, one of the co-organizers of the event. “We saw more enterprises come and they are more generous this year, bringing more vacancies.”

Ding also pointed out that as students are going to graduate in June, many of them actually have already got offers but came to see if there were better choices.

Zhou Hongxing, deputy director of the Shanghai student affairs center, also said that though this year local colleges have 207,000 graduates, a 14,000 increase from last year, more students have signed employment contract agreements with employers by now than the same time last year.

“Seeing the challenges brought by the pandemic, local colleges have started work on promoting employment among students earlier than previous years with enhanced services and professional guidance,” he said.

Zhou Wei, a graduate from Shanghai University, told Shanghai Daily that he found it was easier for himself and his classmates to find jobs than their senior schoolmates last year.

“I saw some senior students were anxious in April last year as there were few offline job fairs and many had no offers when the graduation date was approaching,” he said. “This year, most of my classmates have got several offers and were hesitating about which one to take. I’ve got two, but came here today to see if there are any better options.”

There were also applicants who failed in seeking further education opportunities and started seeking jobs late.

A 2019 Shanghai Jiao Tong University graduate surnamed Zhang told Shanghai Daily that he had failed the National Public Servant Examination and postgraduate entrance examination in the past two years and had to turn his eyes to the job market now.

“I started late so I have to hurry up as a lack of work experience after graduation has become a disadvantage for me in seeking jobs,” he said.

About 200 of the employers are from Zhejiang, Jiangsu and Anhui provinces, who are trying to attract outstanding graduates from Shanghai universities with seductive policies. These include 1,000 yuan (US$154) in subsidies on travel cost for interviews and living subsides of up to 40,000 yuan for graduates from top universities.

The Jiangbei New District in Nanjing, capital of Jiangsu Province, put up a banner introducing the welfare policy targeting college job seekers at the fair.

Xue Feng, an official with the Jiangbei New District Education and Social Security Bureau, told Shanghai Daily the authority has issued a total of 120 million yuan of subsidies in terms of interview subsidies and housing subsidies within the past three years.

He said the new district mainly targeted talent in integrated circuits, biomedicine and new finance, the key industries in the district.