From coffee to cosmetics, Jing'an is thriving

What about starting a day with a marathon in Daning? Or tasting new coffees at Starbucks' first overseas Reserve Roastery? Trying new cosmetics on Nanjing Road W. and enjoying street performance in Jing'ansi? Every corner of Jing'an is brimming with commerce, art and culture, offering a wide variety of choices for fun for everyone. Let's follow Li Qian to have a look at what's been going on. 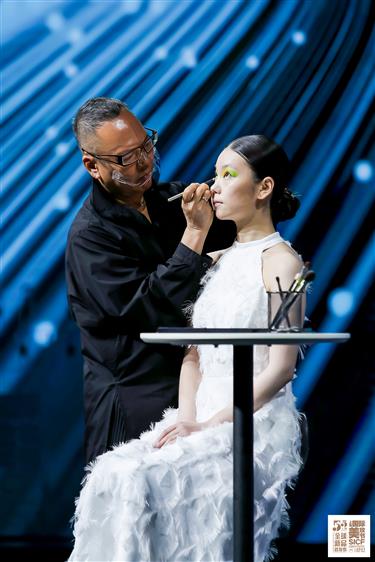 A series of new beauty products debuted at the opening ceremony of the 2021 Shanghai International Cosmetic Festival on May 5.

Products, such as lipsticks, foundations and facial masks, were presented by 24 brands, including L'Oréal, Sisley and Estée Lauder from overseas, as well as home-grown Chando, Proya and Perfect Diary.

At the opening ceremony, L'Oréal announced the establishment of the L'Oréal North Asia Headquarters that will operate businesses in China, Japan and South Korea.

Fabrice Megarbane, president and CEO of L'Oreal China, said the group hopes to form a "beauty triangle" formed by Shanghai, Tokyo and Seoul, as well as to more precisely tap to the needs of Chinese customers. The group will soon release three new brands and flagship stores, and over 100 new products.

Zeng Shuling, beauty editor of Elle China, shared the latest consumption trends in the beauty industry, such as male focused makeup lines, environmentally friendly beauty products and the integration of cosmetic medicine into skincare. She highlighted the rise of Chinese beauty and foreign niche brands.

Chinese beauty brands are no longer copycatting their international rivals, Zeng said. Instead, from ingredients to packaging, they are 100 percent original. Low pricing, quick response to market demand and use of Chinese skincare concepts make them more popular among young people.

She said some foreign niche brands that have had great success abroad are trying to appeal to Chinese consumers.

During the month-long festival, a variety of new products and promotional activities would be introduced to enhance Shanghai's "beauty economy," said Wang Hua, director of Jing'an. 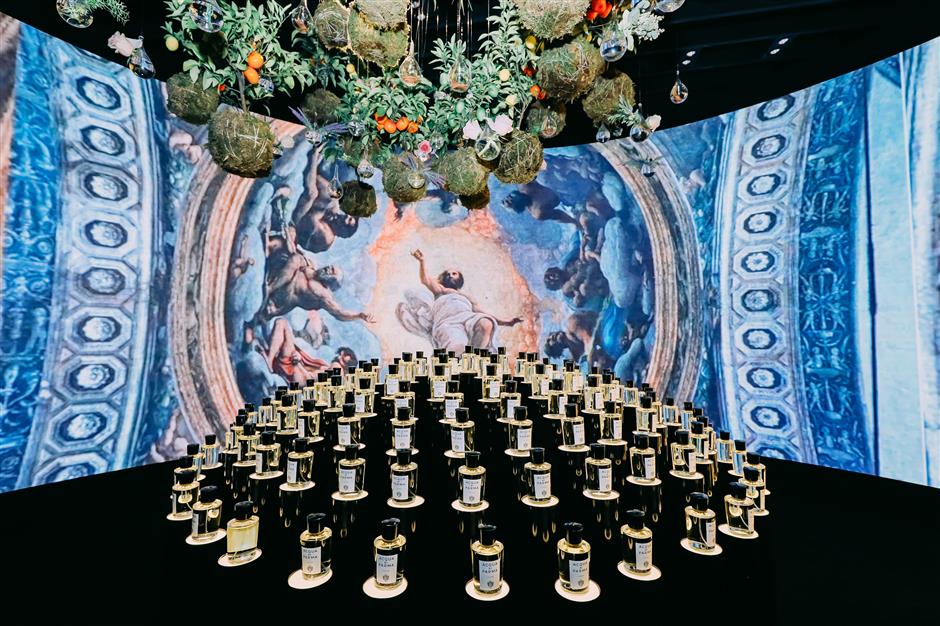 One highlight was a temporary exhibition of century-old Italian perfume brand Acqua di Parma held between May 14 and 18 at HKRI Taikoo Hui mall.

The exhibition featured art, culture and music. It used archways, stained glass and other Italian elements to display the pure Italian savoir-vivre. It promoted a Shanghai limited edition of its candle, exclusively available at its flagship store at HKRI Taikoo Hui.

Wang said the district has long been considered an optimal starting point for foreign beauty companies looking to break into China. It is home to the regional headquarters of Kanebo from Japan, La Prairie from Switzerland, doTERRA from the United States, and L'Oréal, Sisley and L'Occitane from France, among others. 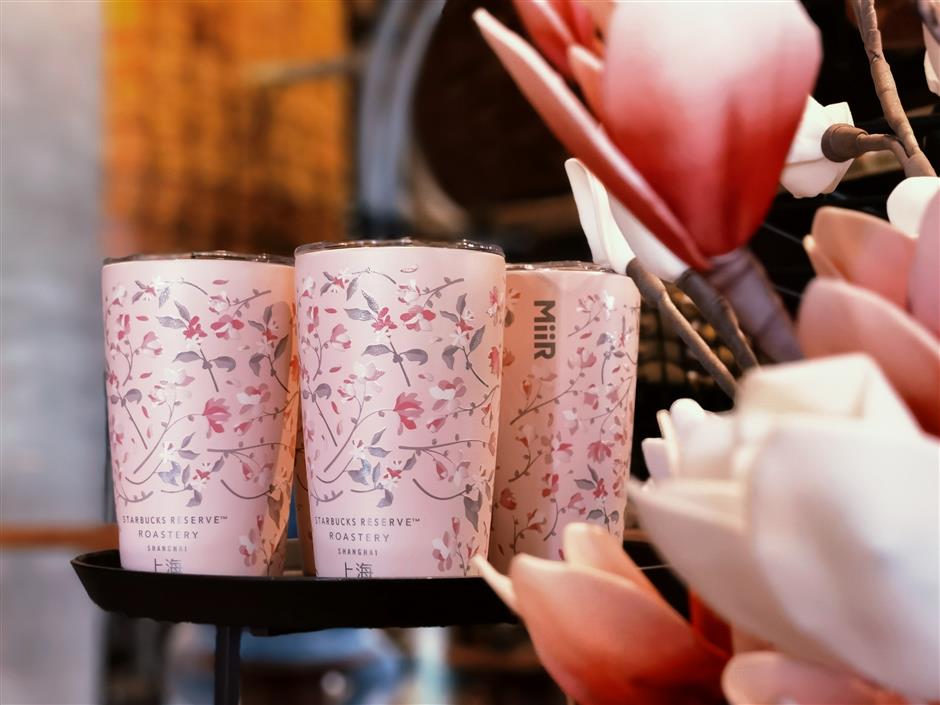 New products and stores were in the spotlight during the district's Double Five Shopping Festival as the District beefs up efforts to strengthen its position as a top place for the "debut economy."

Starbucks' first overseas Reserve Roastery, its biggest outlet, launched an exclusive product only sold through June 21. The cups with a design of pink magnolia flowers display authentic Shanghai flavor as the magnolia is the official flower of the city. 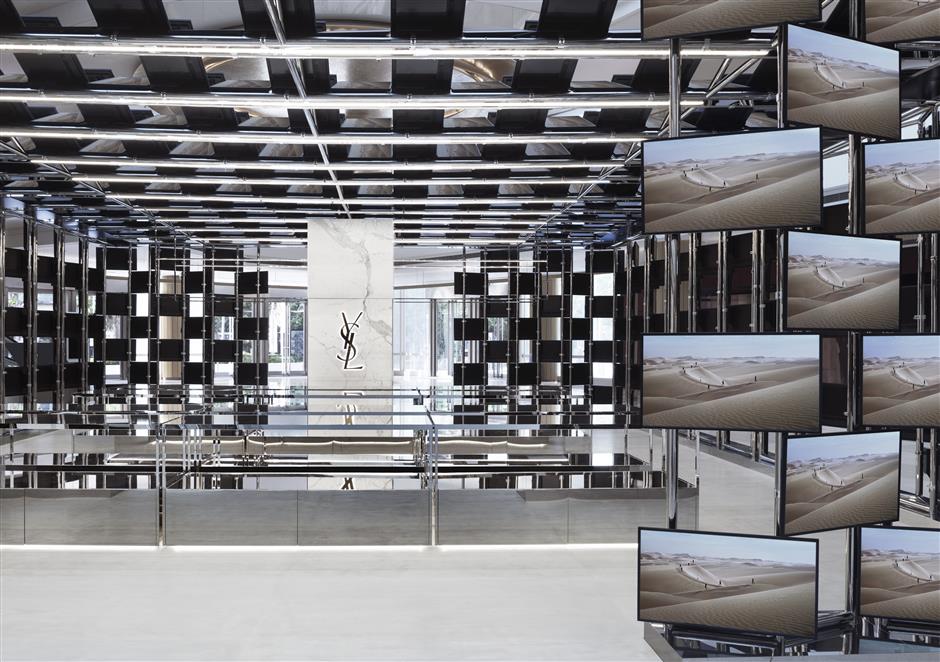 Luxury brand Saint Laurent opened a pop-up store at Plaza 66 mall after it just opened a flagship store at the mall in January. T

he pop-up store from May 1 to 20 was more like an avant-garde art exhibition that used glasses, marbles and LED screens to create a world of black and white, light and shadow.

It sold the brand's 1970s-inspired DENIM collection and the new 520 collection that was designed to celebrate 520 Day, literally "I Love You Day" in Chinese, which falls on May 20. 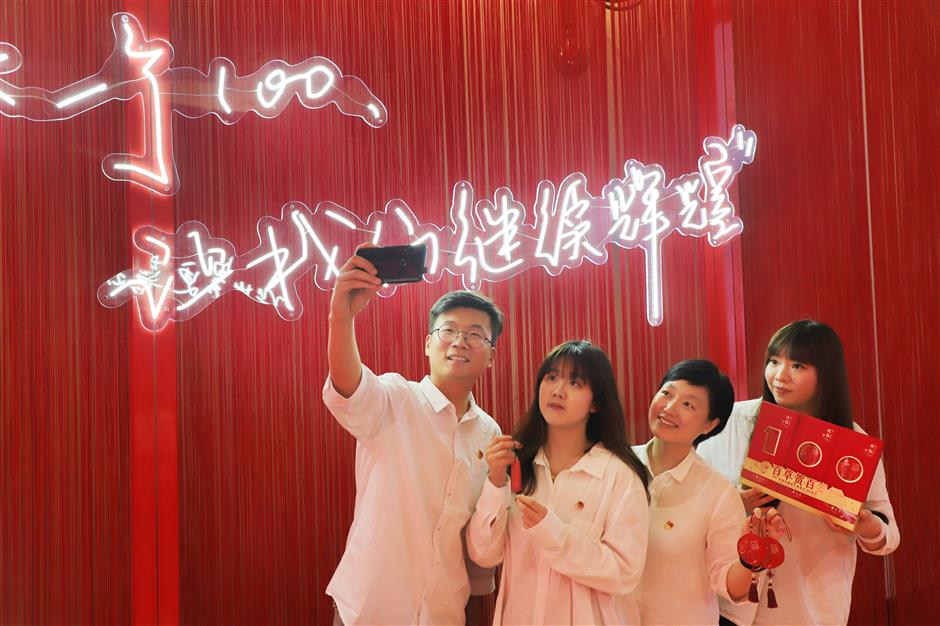 Besides, tried-and-true Jing'an brands displayed new products at the Exposition on China Indigenous Brand that was held to celebrate the China Brand Day on May 10. Of them, renowned qipao (cheongsam) maker Longfeng debuted new pankou (frog fasteners) designs.

Opened in 1936, Longfeng is synonymous with the masterful cutting and delicate embroidery that goes into this traditional Chinese-style garment.

Pankou, sometimes described as the "eye" of the qipao, requires master craftsmanship to create and has been selected as an intangible cultural heritage. One of its latest design of pankou was weaved into the shape of the emblem of the Communist Party of China as to celebrate its 100th anniversary.

Sachets filled with fragrant herbs and medicinal powders are traditionally worn during the Dragon Boat Festival in June. The aroma they give off helps ward off insects and, it is said, evil spirits.

"We've tried many times and finally decided to use huoxiang (giant hyssop), baizhi (angelica root) and other herbs as ingredients. We hope to create nice smells and ensure good effect as well," said Shi Wendao, in charge of the herbal recipe.

Chief designer Jiang Fengze said it cost the team nearly half year to decide on the shape. "Besides the pattern of 100, there were also elements of Shanghai's shikumen buildings where the CPC held the first and second national congresses," he said. 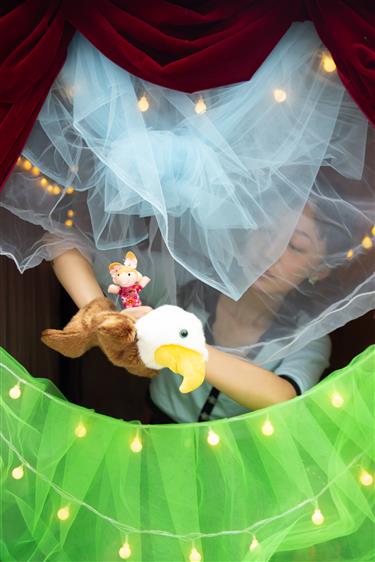 Bringing performance to the public

Puppetry, stilt walkers and clown shows, together with a wide range of street theater performances, were staged at popular destinations and bustling commercial zones, such as Jing'an Park, HKRI Taikoo Hui and Daning Music Plaza, between April 23 and May 9 for this year's Modern Drama Valley.

Performers paraded around and played the roles of deliverymen, Didi drivers and office workers to make people think about their busy life in the concrete jungle and raise awareness of grassroots workers in the big metropolis.

In particular, three "deliverymen" interact ed with audiences and delivered "packages" – from a bottle of drink to a proposal of marriage – to a lucky few.

Another highlight was a mobile puppet theater built on a vehicle.

The idea was inspired by street vendors who are commonly seen in urban villages – shantytowns nestled in downtown areas.

Simple and crude, yet they add warmth and vitality to neighborhoods.

Over the 17 days, the Jing'an Culture Center also turned into an immersive theater. 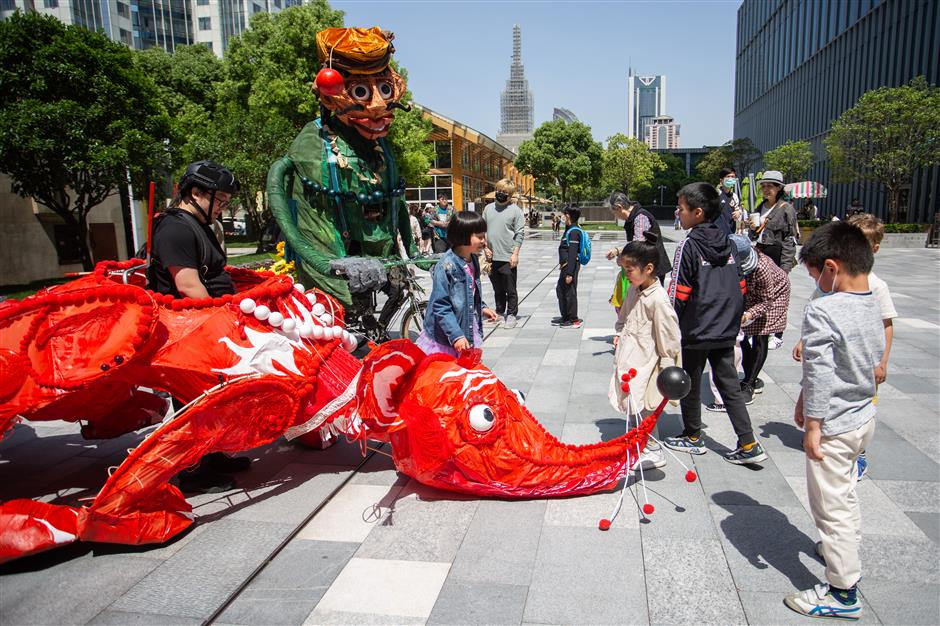 Amateurs had the chance to show their talent during the 2021 Chinese and Foreign Families' Drama Contest.

The finals were held at the Malan Orchid Theater on May 3, and 10 stood out from 16 families from Shanghai and other Yangtze River Delta regional cities Nantong, Wenzhou and Maanshan.

Sun Xiao and his mother staged a heart wrenching story of a young Party member who persuaded his mother to sell the family property to support the uprising against the Kuomintang. He was arrested and writes his mother from prison, saying he had no regrets.

Shao Yindong and his mother presented a short sketch in Shanghainese. Shao is a son too busy at work to spend time with his elderly mother. One day, he found she con fuses the date and mistakes salt for sugar. He realizes she has Alzheimer's. 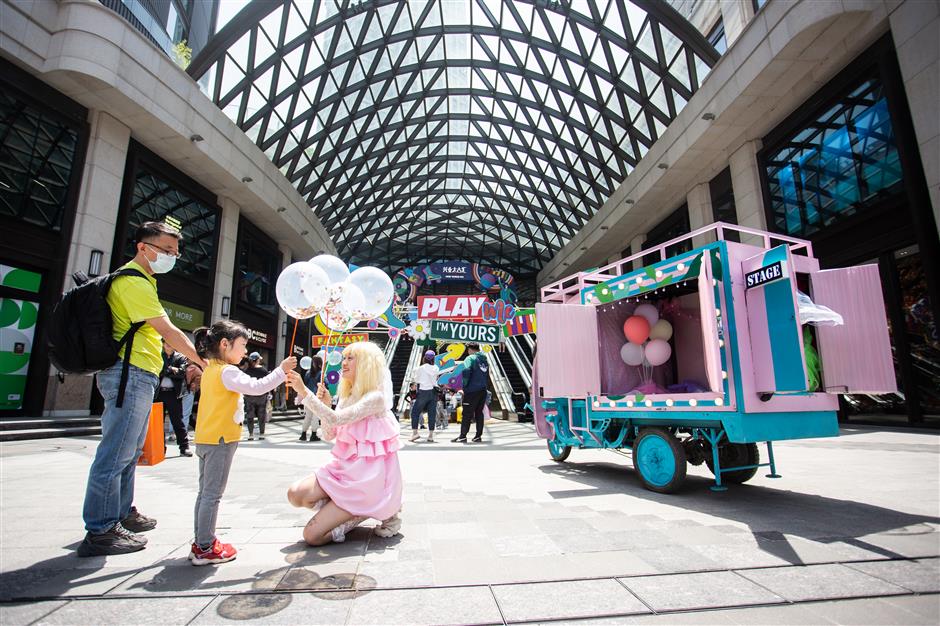 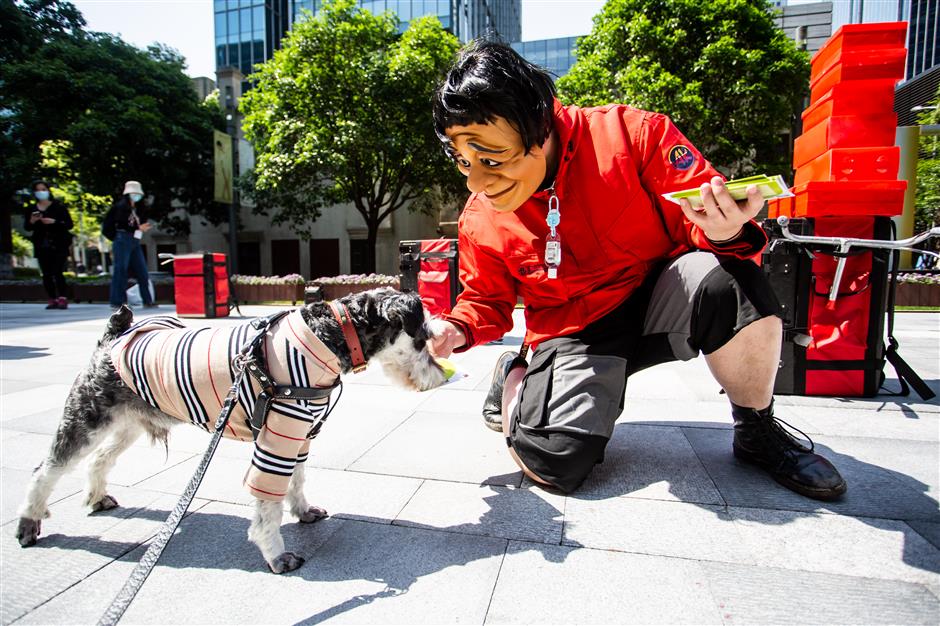 This year's Modern Drama Valley presented 20 productions – over 80 percent of them making their Shanghai debut.

Productions included "Copenhagen," presented by the National Theater of China, Samuel Beckett's "Waiting For Godot," directed by Yi Liming, and "The Gadfly," newly adapted by the Guangzhou Drama Art Center.

The May 10 award ceremony at the 800 Show marked the end of the theatrical extravaganza.

Dubbed the local version of the Tony Awards, it is a significant event in the Chinese theater community honoring the latest productions and talent.

"Niu Tianci," adapted from Chinese author Lao She's 1934 novel of the same name, was named "Play of the Year" and "Best Scenic Design."

Director Fang Xu had previously put five of Lao She's works on stage, including "The Life of Mine," "Er Ma and Son" and "Cat Land." Beijing-born Fang identifies with Lao, who was known for his vivid descriptions of grassroots life in the Chinese capital.

Guo Qilin, a 25-year-old xiangsheng (crosstalk) performer, was named "Best New Artist" for the lead role of Niu Tianci in his stage debut.

"Best Actress" was shared by Jiang Shan and Zhang Lu.

He Nian was awarded "Director of the Year."

Director and educator Xu Xiaozhong was honored for his outstanding contribution to Chinese theater over 60 years. 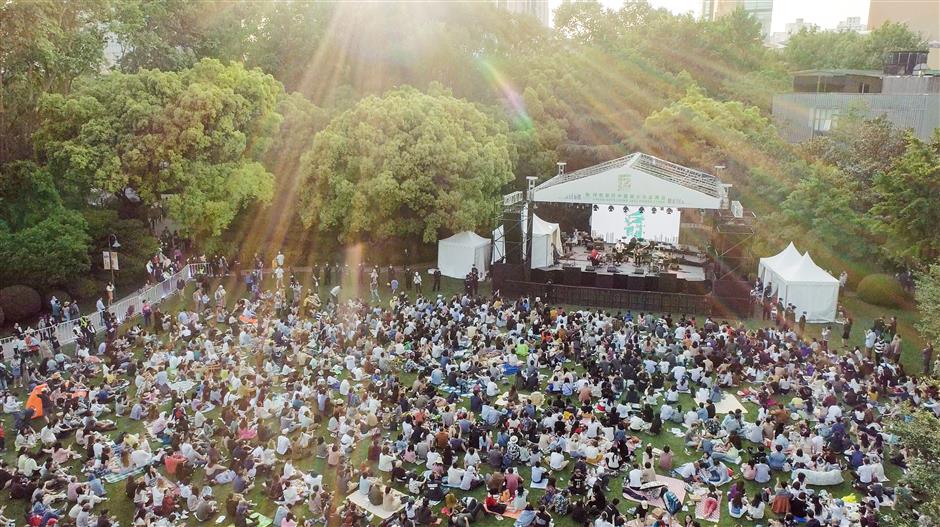 Jazz is in the air

The annual jazz festival has re turned to Jing'an after a one-year pause, with all outdoor shows free.

Li Quan, who's known for blending jazz with pop, presented the popular jazz song "Have You Met Miss Jones," bringing people back to the golden age of jazz.

The theme of the opening concert this year is China Jazz Power. So, performers presented a new adaptation of Chinese folk songs and Chinese-style jazz music.

A highlight was the performance of a jazz version of Chinese patriotic classic song "My Country," which brought loud cheers and applause.

On May 1 and 2, a variety of live street concerts were free to watch from 10am to 8pm at Jing'an Park, the Jiuguang mall and HKRI Taikoo Hui mall. Performers included Tropical Marching Band, Macleen Duo and Hot Club de Shanghai. 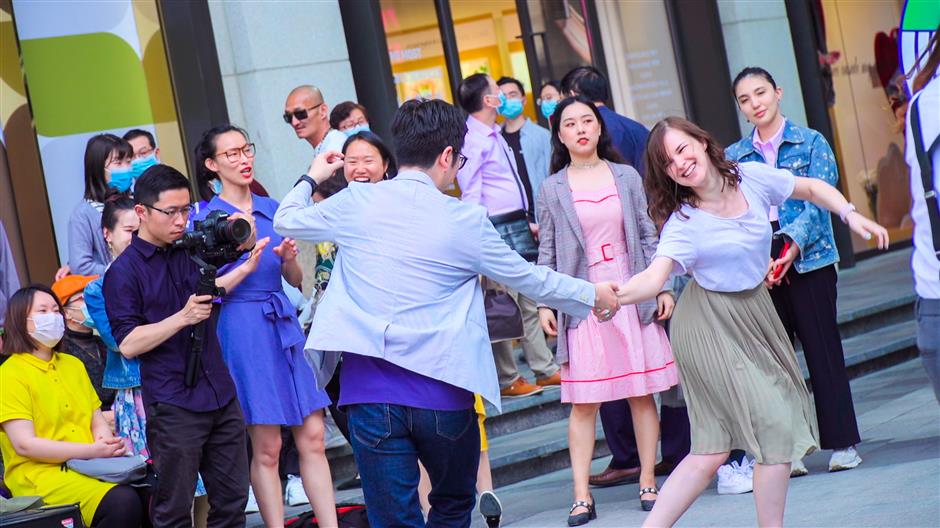 Play me, I'm yours

In the HKRI Taikoo Hui mall, the annual "Play Me, I'm Yours" campaign has returned.

Eighteen hand-painted pianos "popped up" inside and outside the mall, available for anyone to play, free of charge. The artwork on the pianos, featuring sharp colors and cartoon figures, represents street art.

Last year, it collaborated with the China Soong Ching Ling Foundation and World of Art Brut Culture to invite artists and students to paint 17 pianos. Two were sent to the Shanghai Children's Hospital and Jing'an Zhabei Central Hospital. 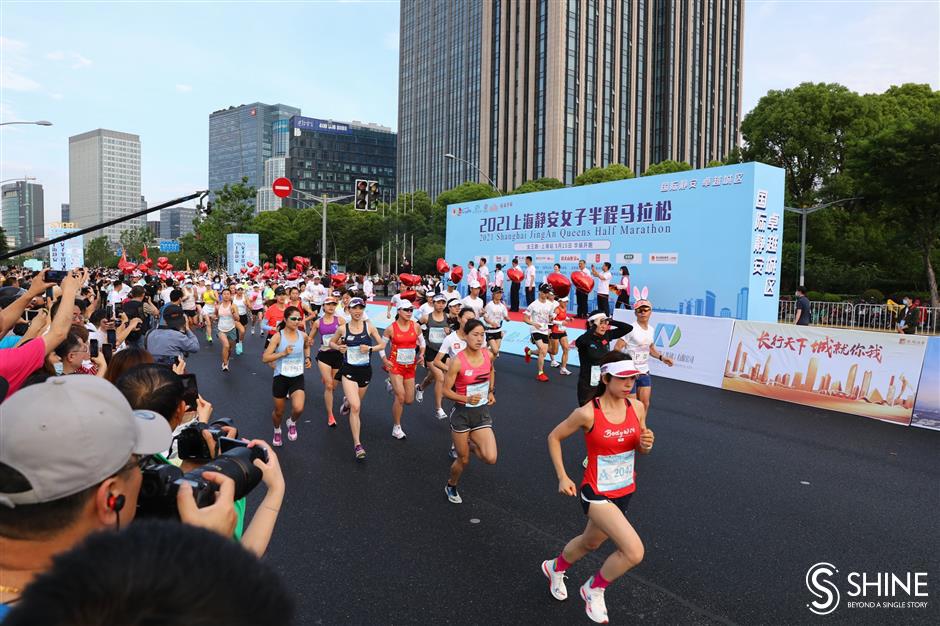 Most runners were women. But many boyfriends and husbands joined them.

As the starting gun went off, VIP guest Chinese national record holder for the women's half marathon Sun Yingjie took the lead. National team runner Zhang Xinyan was the first to complete the 21- kilometer half marathon, clocking 1 hour 13 minutes and 47 seconds. That was 41 seconds slower than her last performance in the 2021 Shanghai Half Marathon in which she took the women's crown.

Last month, Zhang set the Chinese women's 3,000-meter steeplechase record of 9 minutes and 20.32 seconds, qualifying her for the Tokyo Olympics.

Li won the 2020 Shanghai Marathon with a personal best of 2 hours, 26 minutes and 15 seconds. Last month, she finished third in the 2021 Xuzhou Marathon at 2 hours, 29 minutes and 13 seconds. She's also qualified to represent China at the Olympics.

The event started as a 10-kilometer mini marathon in Daning Park, but last year expanded to cover the entire Daning area with the half marathon.

Now the Shanghai leg of the Queen's Run series, it awards runners who finish the half marathon within two hours access to any Queen's Run station held this year in the Yangtze River Delta region.