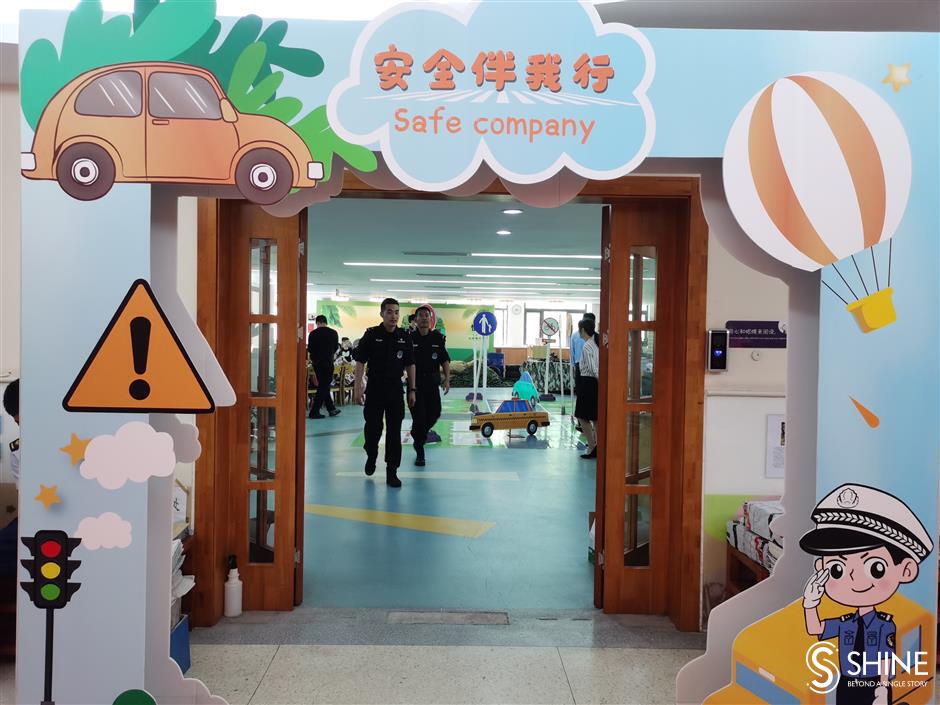 Police joined hands with a primary school in Huangpu District today to provide security education via games, demonstrations and activities during a gala for students to celebrate the upcoming Children's Day, which is tomorrow.

There were no classes today for the 1,300 students at the Shanghai International Studies University Huangpu Foreign Language Primary School. Instead, they watched performances, played games and had special drinks to celebrate the annual festival. Tomorrow, they will have the day off to spend Children's Day with their families.

Some of today's activities were arranged by the Huangpu branch of the Shanghai Public Security Bureau, including recognizing traffic signs, an exhibition of real guns and a lecture on tips for preventing telecom scams. 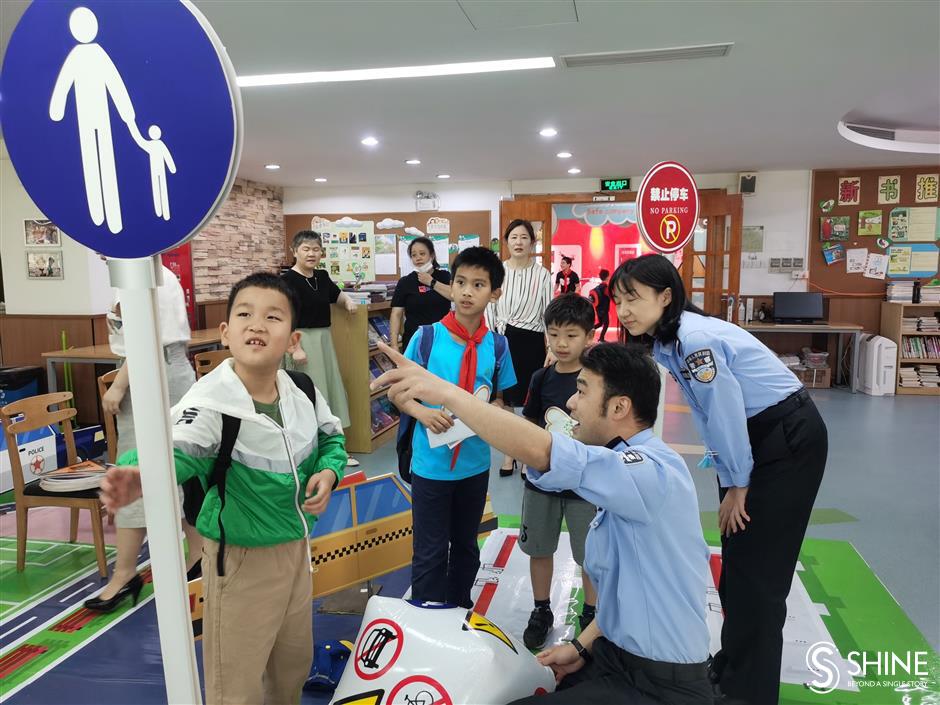 Li Jiajing, a police officer at the Wuliqiao neighborhood police station and a veteran in promoting security awareness, told of real telecom scam cases with students and invited them to share their experiences.

"Children have become a target for online fraud, especially in online games," said Li. "For example, many parents use anti-obsession models in their mobile phones and computers to prevent children from playing games for too long. Swindlers often lure children by offering to help them break down the anti-obsession model, and then obtain information including accounts and passwords to make money."

Via mutual sharing, Li guided children to be aware of protecting their personal and family members' privacy, and be vigilant toward strangers online, especially those who send them interlinkages or ask them for money.

"Swindlers are constantly developing new fraud techniques, and we're trying to update the public with information about the latest tricks to prevent them from falling victim," she said.

Firefighters also demonstrated how to use fire extinguishers and escape ropes, and brought outfits for children to try on. 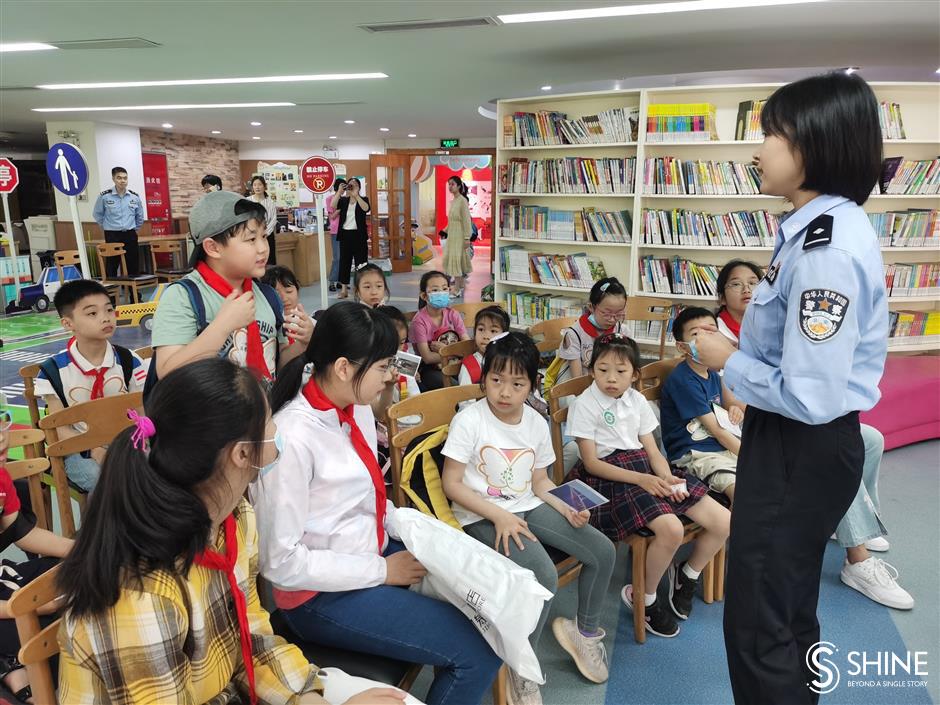 Gu Feng, the school's principal, said the staff take security education for children very seriously, and the participation of the police and firefighters in the gala is very helpful.

"They are more knowledgeable than our teachers about security education, and the games are interesting for children," said Gu. "We hope that our children will bring what they have learned about security back home to promote safety awareness among their parents and grandparents."

She said the presence of police and firefighters can also help students understand more about those who keep social order and public security, and help cultivate their interests and future career options.

"The more children experience the more they will learn about themselves and their own interests," said Gu. "So we have set up about 30 activities for students to learn and find out what they really like." 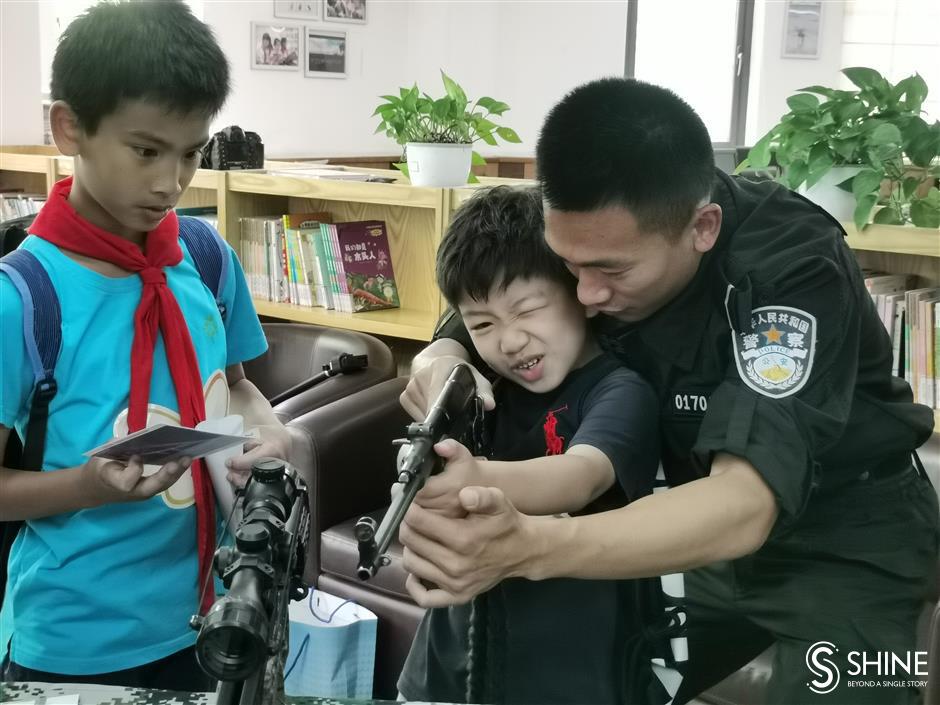 Guns are a favorite topic for boys.