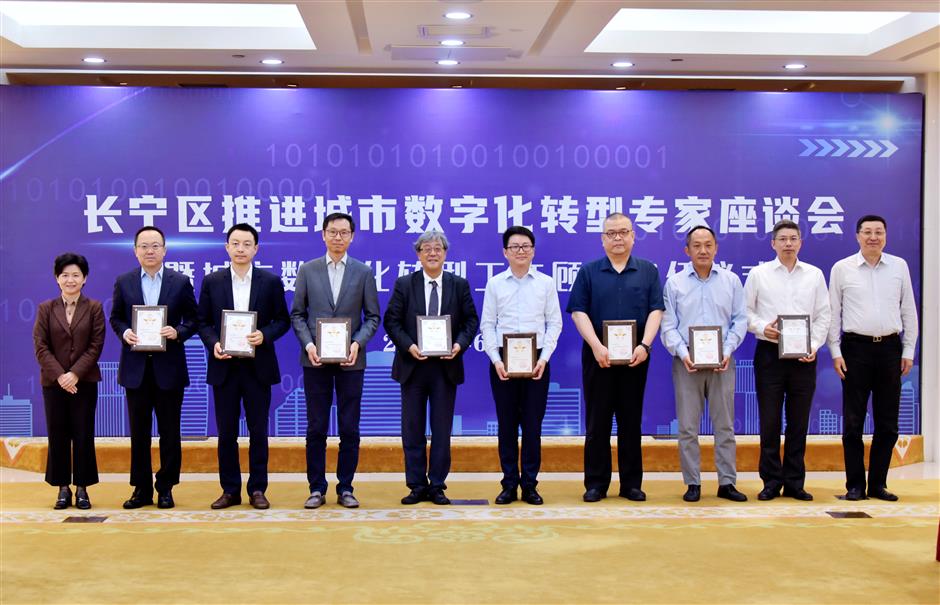 Wu Zhiqiang (fifth from left), a member of the Chinese Academy of Engineering and vice president of Tongji University, is appointed to direct Changning District's digitalization campaign along with other experts from companies and research institutes.

Smart applications related to community life, medical services, education and senior care are to be launched in downtown Changning District to speed up digital transformation and improve people's daily lives.

Trial operation of a "one-button" elderly care platform will be launched in Changning communities to allow senior residents to make medical appointments and emergency calls from home, as well as calling cabs or having meals delivered.

Intelligent sensors, such as smart chips in electric and water meters, will be installed to ensure the safety of elderly people living alone.

An expert panel was appointed on Monday to guide the district's digital transformation.

The applications will mainly focus on the economy, life and governance to cap Changning's ambition to become an international quality district with global influence, Wang said.

The new experts include Wu Zhiqiang, a member of the Chinese Academy of Engineering and vice president of Tongji University.

"Digitalization leads to the future of China," Wu said in a speech after accepting the three-year appointment. He said the applications should cap the demand of different groups of people, such as the elderly, out of towners and the young generation. He introduced a "Digital Happy Home" blueprint he had designed for the district.

The Changning government has launched a survey to identify the digital demands of companies and residents.

Residents' main concerns include privacy and cybersecurity, community services, parking management and noise as well as the "digital divide" of the elderly and physically challenged, said Yang Yuanfei, the district's deputy director.

Older people, for example, had complained it was difficult for them to operate the apps to call a cab, book tickets, pay parking charges or make medical appointments, Yang said.

To solve the problems, some smart tools, furniture and daycare facilities easy to operate for the elderly will be developed under the guidance of the government.

Local expats, tourists and migrant workers were mainly concerned about the government's talent policies and subsidies as well as how to solve inter-provincial issues.

Changning is home to over 4,900 Internet companies related to fresh e-commerce, touchless delivery, online education, online entertainment, new mobile transport and online finance. Leading enterprises such as Meituan, Pinduoduo and Ctrip are based in the district.

Many Internet companies have altered their business models amid the pandemic and now focus on livestreaming sales and e-commerce.

New infrastructure such as additional 5G base stations will be built to cover the district, while more innovation parks like the High Street Loft-Creater park, one of the city's first online new economy industrial parks, have been launched to support the sector.