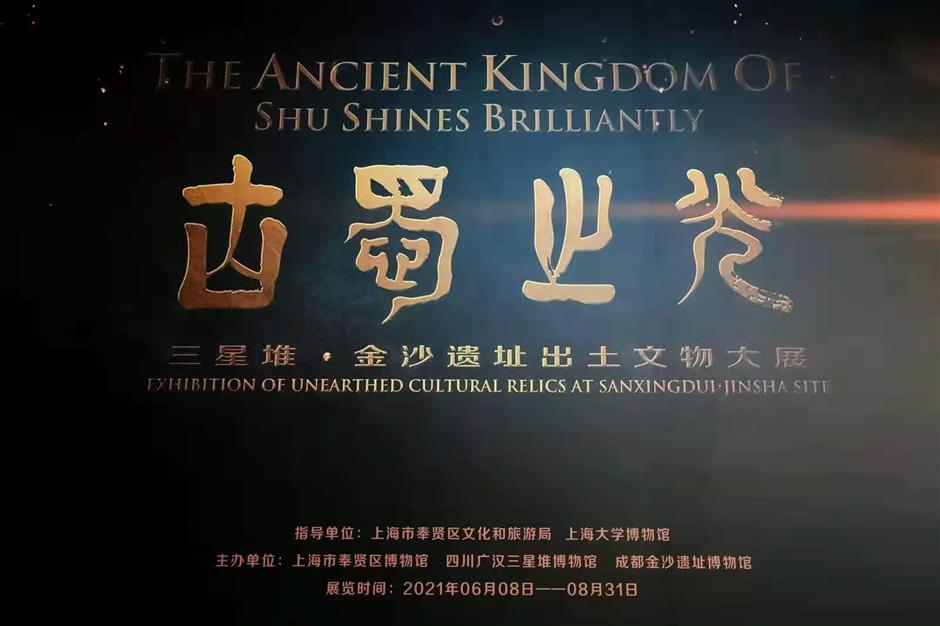 An exhibition on Sanxingdui-Jinsha ruins sites is launched in Fengxian Museum in Shanghai from today.

As new discoveries are unearthed during an ongoing excavation at the Sanxingdui ruins site in Sichuan Province, an exhibition of the ruins' relics opened today at Fengxian Museum in Shanghai.

Featuring ivory carvings, bronze sculptures, jade wares and gold masks that look like bizarre alien faces, the exhibition sheds light on the mysterious Sichuan civilization of more than 3,000 years ago.

All of the more than 130 artifacts on display are relics excavated from the Sanxingdui and nearby Jinsha ruins sites, 60 of which are rated as the country's first-grade cultural relics, which cannot be privately traded.

The sites were first discovered almost a century ago, and major breakthroughs were made in 1986 with the discovery of two pits believed to be used for sacrificial ceremonies.

More than 1,700 artifacts were found at that time, including gold masks, animal-faced sculptures, bronze objects, a large amount of ivory, clamshells and "divine trees" – bronze sculptures of trees with stretching branches. A new round of excavations began last September after an interval of three decades.

Though the exhibited antiques are not the latest findings, they open windows for a quick glimpse into the ancient cultures that existed in the upper reaches of the Yangtze River during the pre-Qin period (prior to 221 BC). 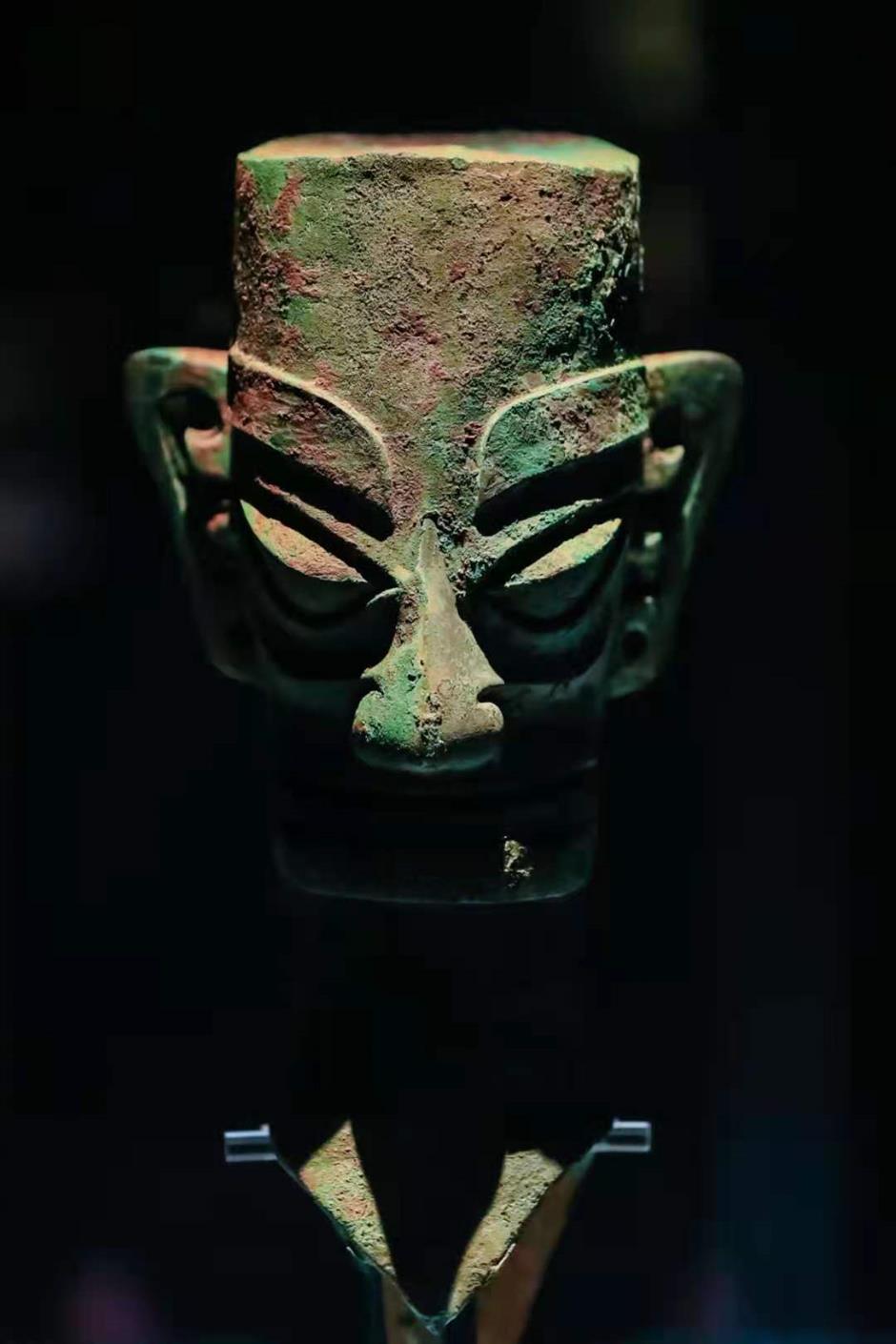 A large number of bronze objects were found in the Sanxingdui and Jinsha ruins sites, and bronze masks and heads are most spectacular surviving examples of monumental bronze sculpture.

"This exhibition in Shanghai is a comprehensive, brilliant pastiche of Sanxingdui and Jinsha cultural relics," said Liu Yu of the Sanxingdui Museum. "It features some of the most famed artifacts that people are so crazy about, such as the gold masks and the upright bronze figure."

One of the highlights is a bronze mask that is 1.38 meters wide and 64.5 centimeters tall, known as the world's earliest and biggest mask of its kind. With a pair of protruding eyeballs and two big ears sticking out like wings, the giant mask glares at the entrance, shining by lamplight in the dark. 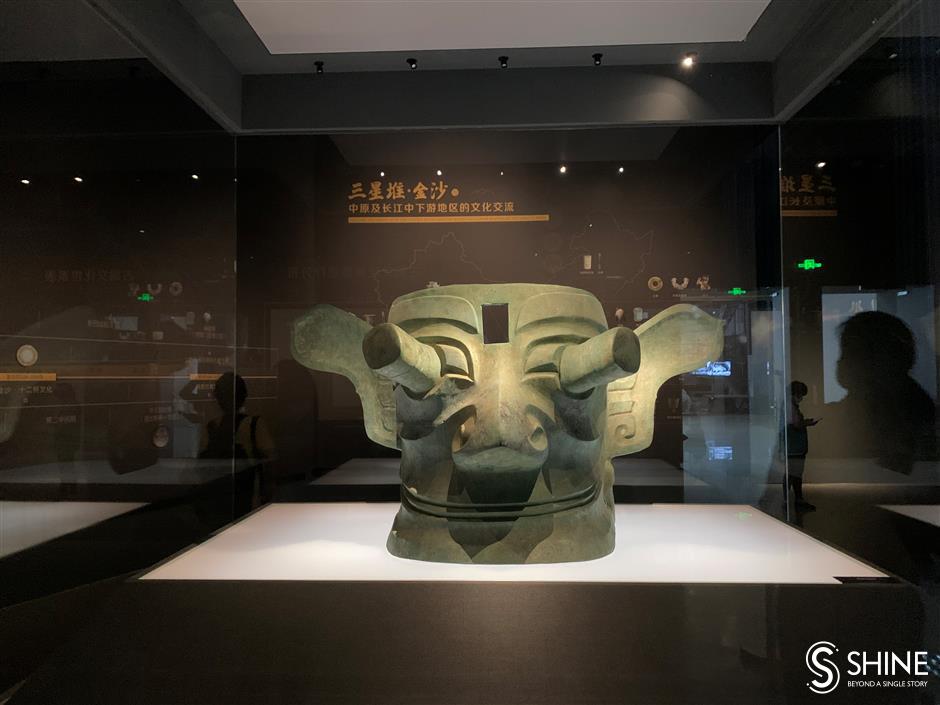 The bronze mask that is 1.38 meters wide and 64.5 centimeters tall features a pair of protruding eyeballs and two big ears sticking out like wings.

It's said the first king of ancient Shu State (today's Sichuan Province) had protruding eyeballs and big ears, so his people made him an exaggerated facial mask and worshiped the king as a god, who was said to be able to see thousands of miles afar and hear from every corner.

The upright bronze figure on display is a real-size replica, which revives even a single crack of the original. Standing 1.72 meters tall and weighing 180 kilograms, it's the world's tallest and most intact bronze statue. The figure extends his big arms, as if trying to embrace something. The strange pose has triggered wide discussions in the archeology world for many years, including the speculation that he might be holding a scepter.

Crowned and dressed up gorgeously but without shoes, the man is probably a supreme leader exemplifying a god, king and wizard, according to archeological experts. He stands barefoot on the high platform and looks like he's hosting a religious ceremony. The patterns on his clothes provide rich materials for researchers who study the ancient Shu's weaving industry.

The free exhibition runs through the end of August, and people can make reservations via the museum's official WeChat account, Alipay and the Suishenban app. 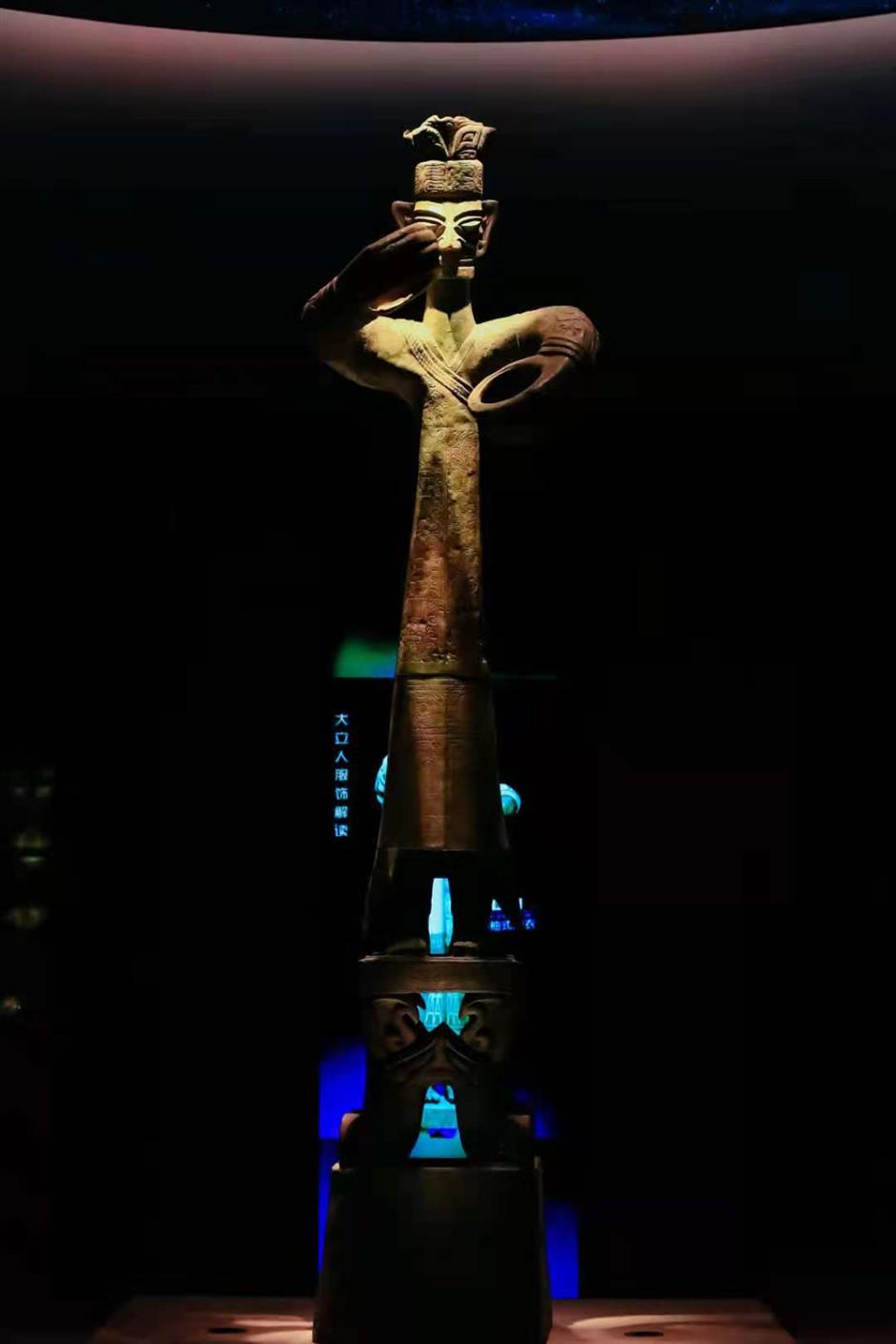 The upright bronze figure on display is a real-size replica of the original, which is 1.72 meters tall and weighing 180 kilograms. 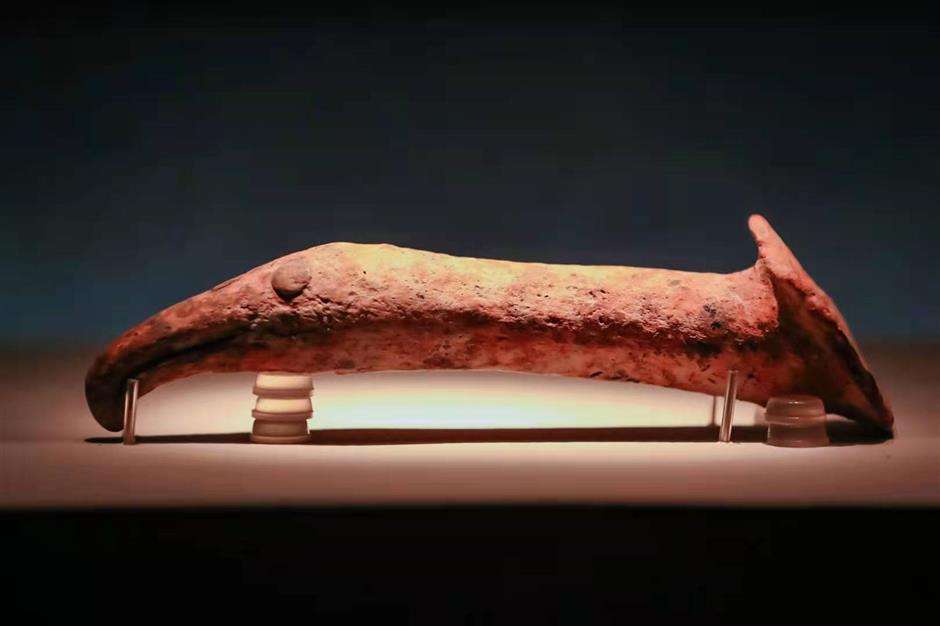 A clay handle of a spoon carved with a bird head.