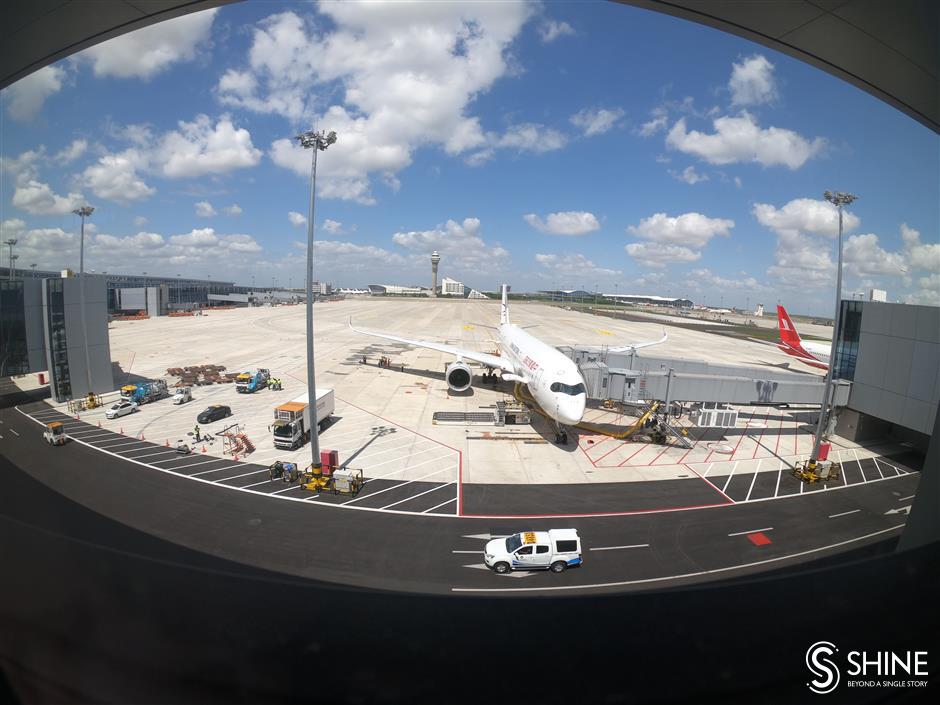 An aircraft at the satellite terminal of the Pudong airport.

Shanghai is to support the planning and construction of a new airport in Nantong in neighboring Jiangsu Province, to consolidate the core status of the Shanghai international air hub, a senior official with the city's transport authority said on Tuesday.

Shanghai's Pudong and Hongqiao international airports will also set up virtual terminals, where passengers can check in and take a long-distance bus to the airports in Shanghai, in neighboring Yangtze River Delta cities, such as Suzhou in Jiangsu Province and Jiaxing in Zhejiang Province, said Li Junhao, chief engineer of the Shanghai Transport Commission.

"A transregional airports' cooperation mechanism will be explored to drive the future development of the city's air hub," Li told a press conference on Shanghai's transport development blueprint during the 14th Five-Year Plan period (2021-2025).

Shanghai's airports have become the world's busiest with over 130 million travelers a year and some 4.1 million tons of cargo.

The Pudong airport will drive the Phase-4 expansion to cap the rising traveling demands and become the world's top air hub.

The H-shaped terminal building, the world's largest, is about 700 meters from existing terminals 1 and 2.

With the new terminal open, Pudong can now handle 80 million passengers a year, 6 million more than before.

The Civil Aviation Administration of China has approved to make Erjia Town in Tongzhou the recommended site for the new Nantong airport, according to the city's government.

The Shanghai and Jiangsu governments have signed an agreement to plan, construct, operate and manage the new airport.

"The Nantong new airport will work with the Pudong and Hongqiao airports to create a multiple airport system air hub," the Nantong government said on its website.

The new airport will be connected with Shanghai's subway system and other transport networks to make it an "airport on the rail," the Nantong government said.

Shanghai aims to create a multilevel, integrated, ecological, smart and efficient transport system by 2025. The international shipping center will become world-class, while regional traffic connections will be superior to other domestic cities, according to the blueprint.

To achieve the target, the city will build 960 kilometers of subway lines and outskirt railways by 2025. Public transport will account for at least 45 percent of the means of traveling for downtown residents. During rush hours, public buses on specialized bus lanes will drive in an average speed of 18 kilometers per hour.

The transport network in Shanghai's five "new cities" in Songjiang, Jiading, Fengxian, Qingpu and Nanhui, which are expected to be growth engines for the city, will be further enhanced, said Zhang.

The Lingang New Area of the free trade zone, for instance, will be 15 minutes from the Pudong airport, 30 minutes from Longyang Road and other downtown traffic hubs, an hour to Hongqiao airport and 90 minutes to the main Yangtze River Delta cities, he said.

Green transport will be widely promoted. Public buses using new and clean energies will account for 96 percent of the total fleet. Hydrogen fuel technology will be promoted in public transport as a pilot program.