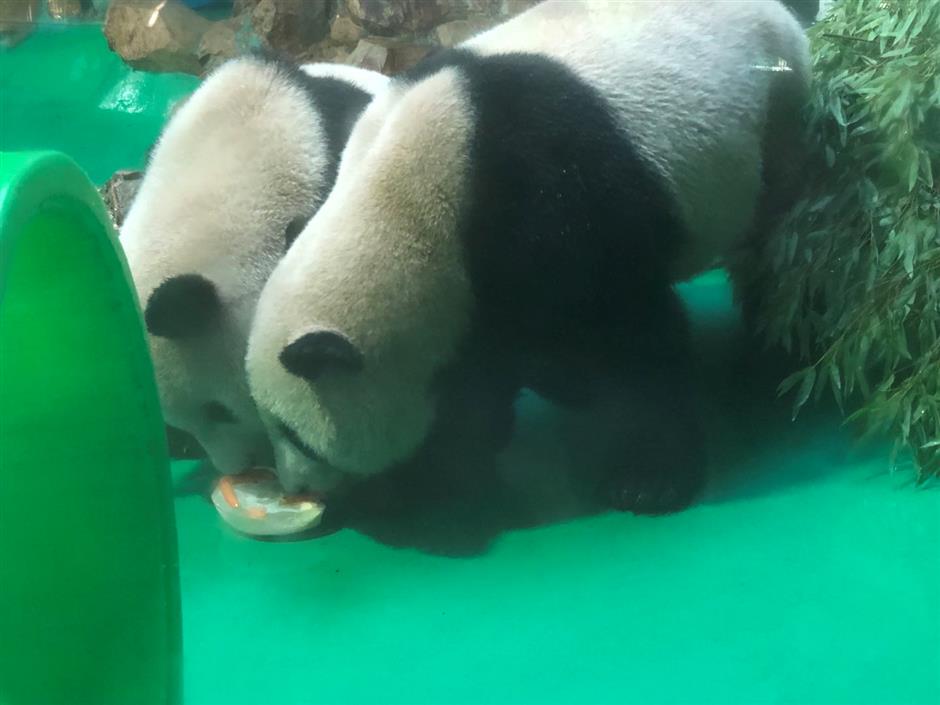 Giant pandas He Feng and Xing Guang, the stars of Shanghai Zoo, enjoy fruit ice as zoo authorities try to be keep the scorching heat at bay. 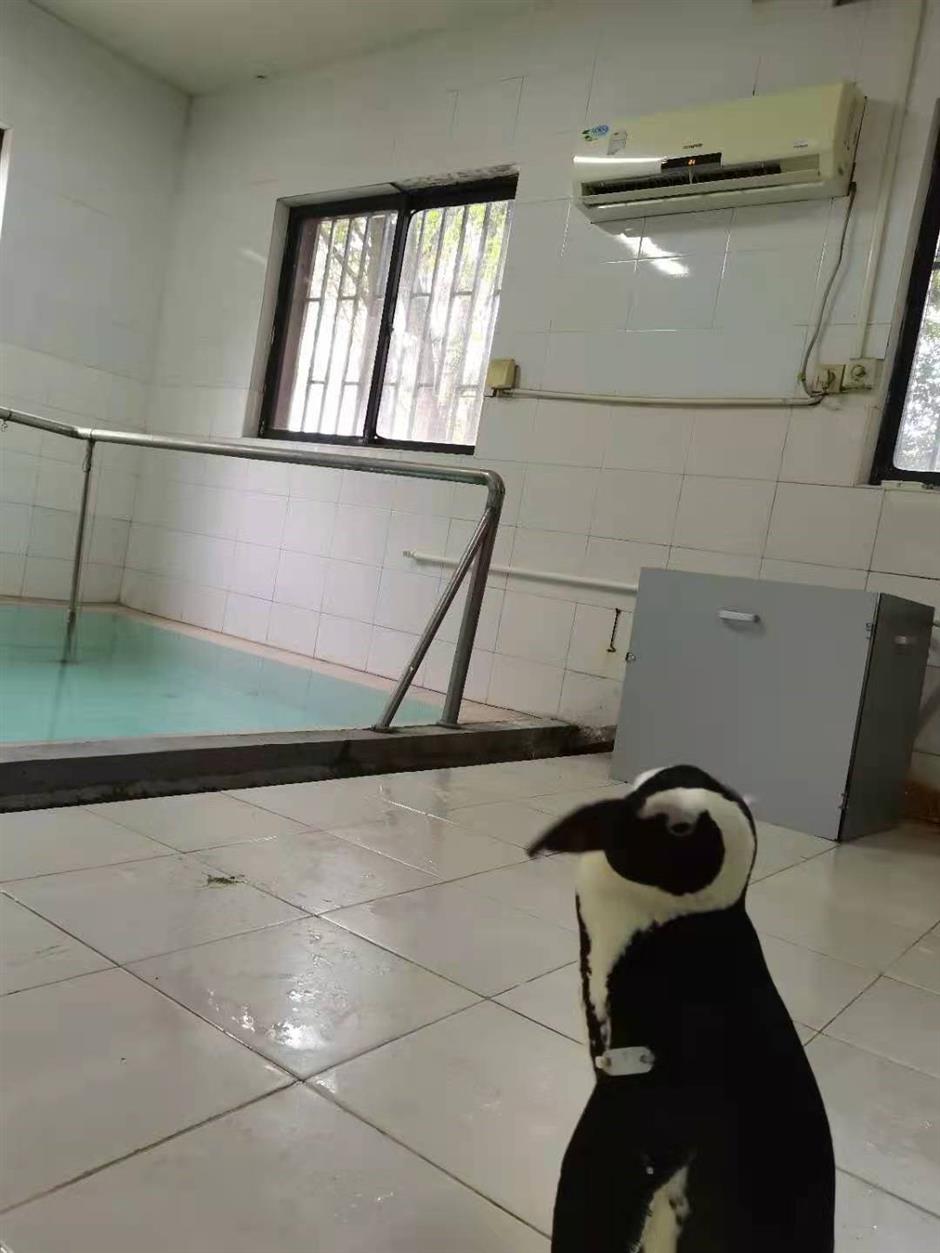 A penguin enjoys air conditioning in its enclosure.

It's been scorching hot recently, with a yellow alert for high temperature issued on Monday afternoon. But the animal residents of Shanghai Zoo in Changning District are being given a cool treat and special sumptuous banquet to ensure their comfort.

Two giant pandas He Feng and Xing Guang, the stars of the zoo, are treated with fruit ice. Air conditioners have been turned on for them.

Iced watermelons are the favorite of brown bear Yuan Yuan, who can finish one each time.

The feast for Yuan Yuan also includes fruit and vegetable ice with apple, cucumber and carrot.

Three Siberian tigers are given special milk ice cream to cool them off, while elephant Ba Mo enjoys a shower and is served by four big electric fans.

Trees such as palms provide shades for animals like tortoises. 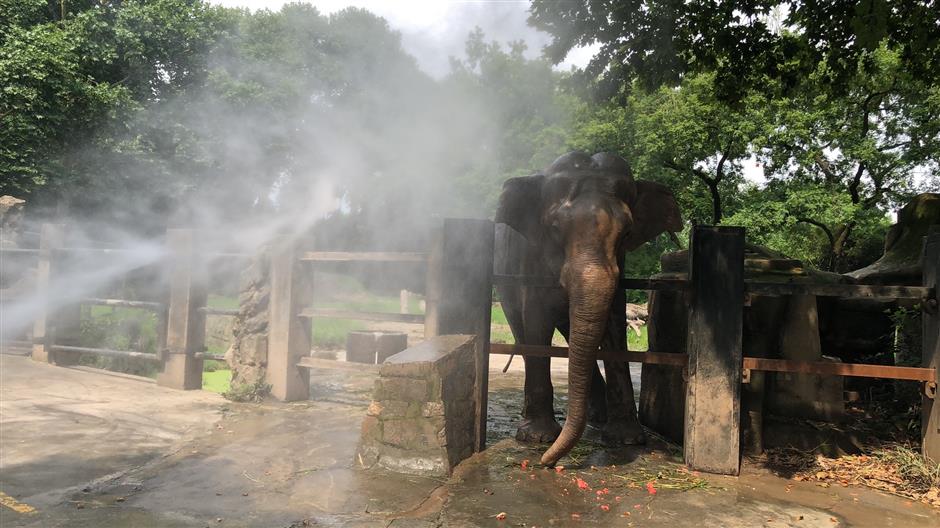 An elephant has a spray bath to keep cool. 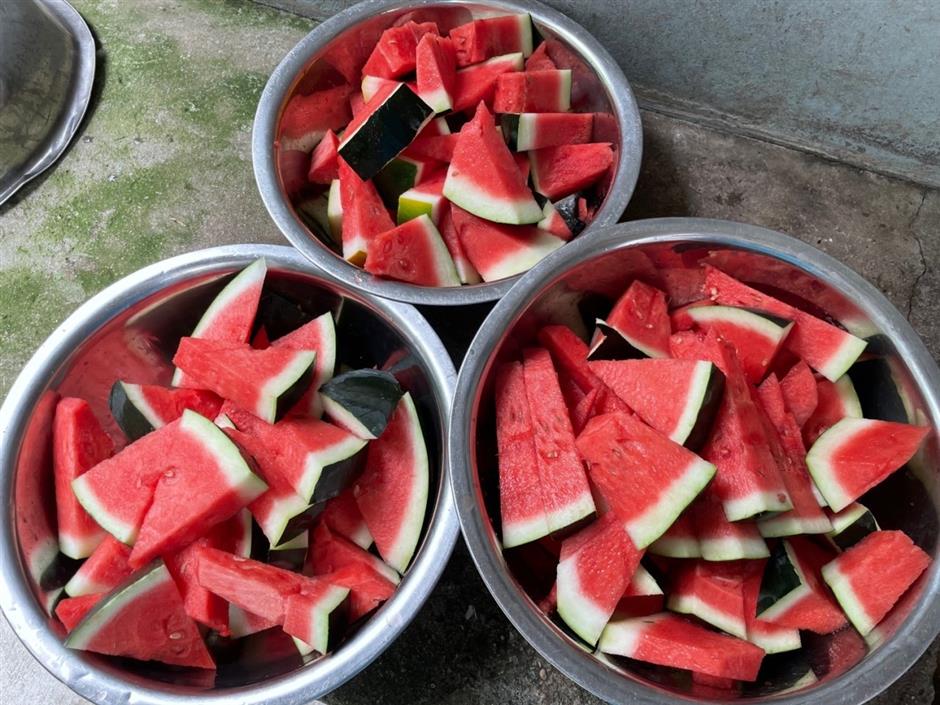 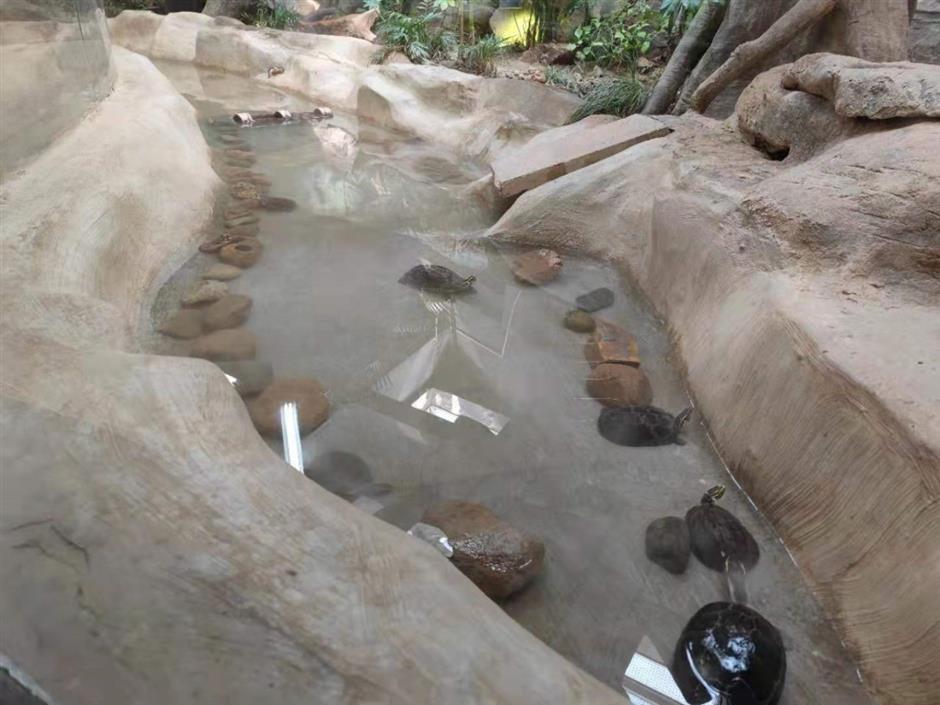 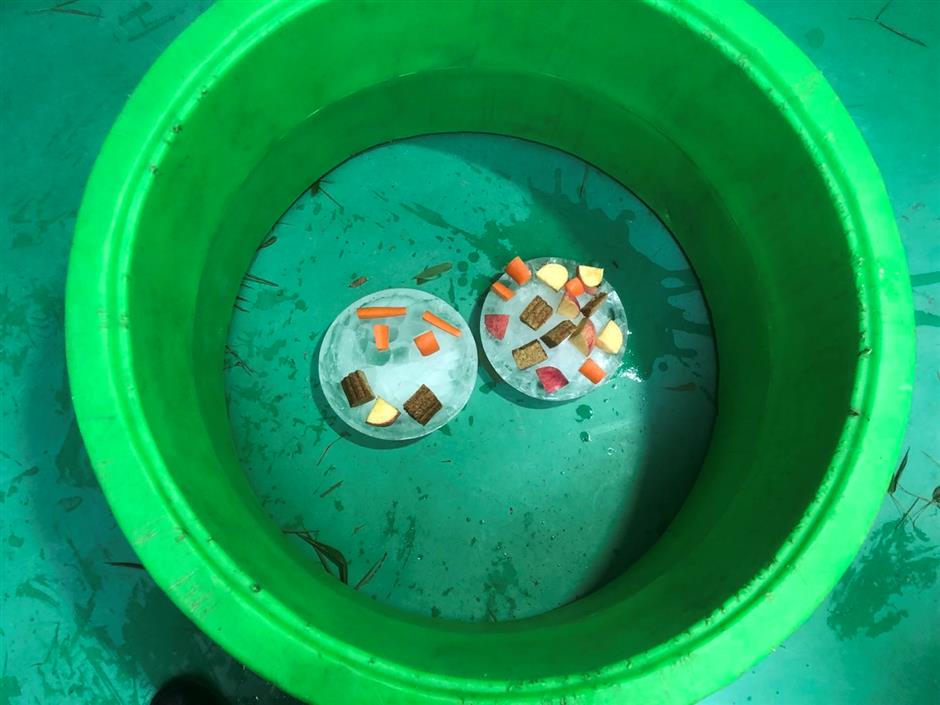 Fruit and vegetable ice for animals

Spray and shading mesh are used to provide a cool place for birds and penguins.

Air conditioners have also been switched on for macaws and penguins.

South American tapirs hide under water. Alpacas have been sheared before summer, but that's not enough so they bathe themselves in a pool.

In the gorillas' abode, air conditioning is kept at a constant 28 degrees Celsius, the most comfortable temperature for them. They are also fed frozen yogurt.

The gorillas are allowed to take a stroll every morning outside when the temperature is relatively lower.

Frozen watermelons are extra desserts for giraffes to increase their supply of sugar content. They cannot wait to sink their teeth into the delicious snacks each time.

Amphibians and reptiles enjoy sprays and frozen fruits to keep them cool and healthy. 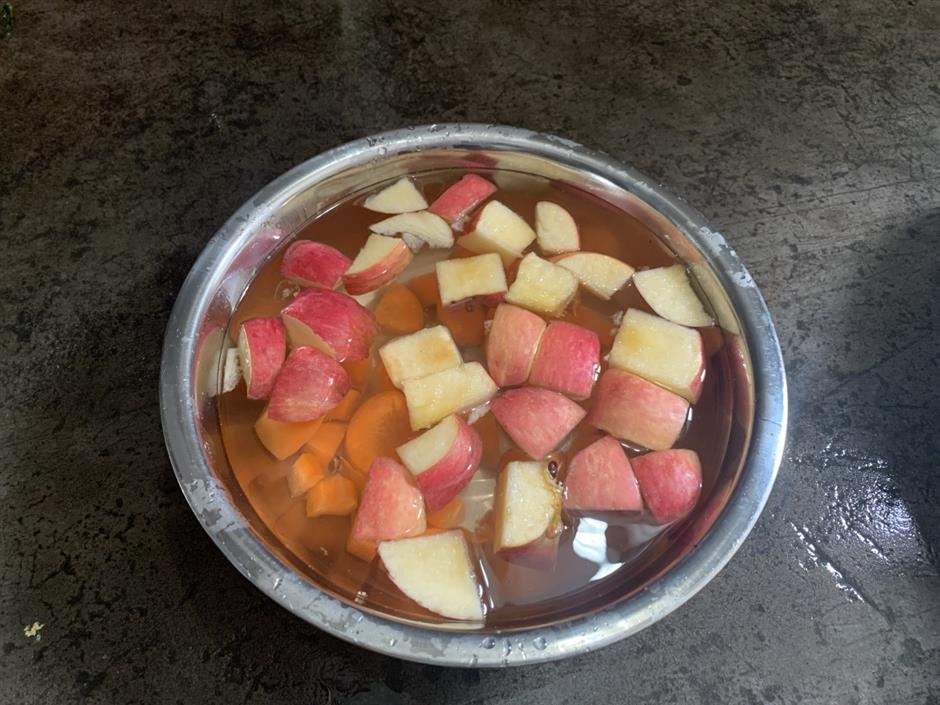 Apple ice for the animals 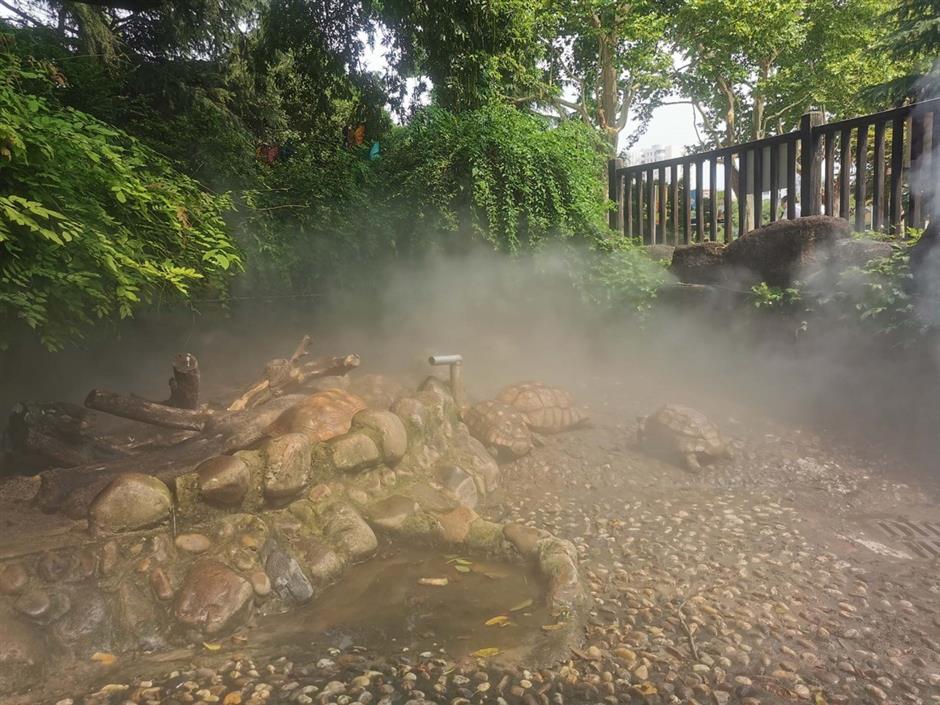 Water is sprayed for tortoises