Global appeal for bids to design tallest structure in Puxi 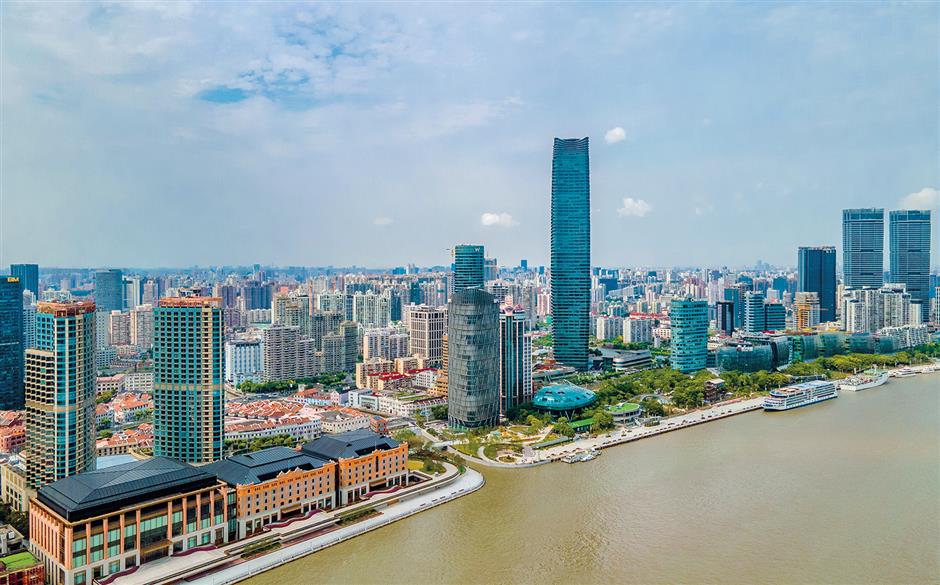 A global campaign has been launched to solicit designs for a landmark building on the North Bund shoreline destined to be the tallest building on the west bank of the Huangpu River.

The international campaign marks the official start of the project which is intended to be world "top standard," according to Hongkou District government.

Twenty-four percent of the plot of land, near Dantu, Dongchangzhi, Gaoyang and Tangshan roads, will be used for commercial enterprises, restaurants and hotels, while the rest will be used for offices.

The project, within a car-free pedestrian zone, will be adjacent to a central greenbelt area on the riverside and give way to some spectacular scenery overlooking Huangpu River.

Sightseeing platforms have been planned on the top floor and the second floor of the building, which will be open to the public around the clock. It will also feature an underground plaza covering 200 square meters.

"The new high-rise will be on a par with the skyscraper group in the Lujiazui area as well as the exotic Bund structures on the opposite side of the Huangpu River," said an official with the North Bund Development and Construction Office.

The landmark structure will become the tallest in Puxi, surpassing the 320-meter Sinar Mas Plaza tower, the current tallest building on the North Bund and third-tallest in the city, after the 632-meter Shanghai Tower and the 492-meter Shanghai World Financial Center in Lujiazui.

Nine candidates will be selected from the global solicitation campaign. At least three candidates should have been involved in the design of the world's top 20 skyscrapers above 300 meters tall.

Four winning designs will be chosen from the nine candidates for in-depth design assessment. The final project will be selected from them by the end of the year.

The new round of planning on the North Bund is Shanghhai's largest-scale project after the development of Pudong's Lujiazui financial hub in the 1990s.

The district government has studied the development and planning of top-level central business districts around the world, such as Canary Wharf in London, Manhattan in New York and Marunouchi in Tokyo. The experience garnered from other Huangpu River waterfront developments, such as Lujiazui, Qiantan, or the New Bund, and the West Bund, has also been studied.

The district aims to draw on global wisdom to develop the waterfront into Shanghai's "world-class sitting room."

Apart from the building, the district government has also launched a global competition with awards of up to 7 million yuan (US$1.08 million) to seek designs from around the world for four key regions of the North Bund around the landmark skyscraper.

Designers, companies, colleges, as well as design and research institutes, are asked to integrate into their plans the regional characteristics of the North Bund and its surroundings.

The Dongyuhang Road area was once home to several old derelict residential buildings. But most of its residents have been relocated and plans are in place to make it a new community while at the same time preserving its history.

Shanshouli, a typical old lane-style neighborhood built around the 1920s, will have its residences preserved to highlight the history of the North Bund area.

Near the building, the world's 10th and Shanghai's third Raffles City commercial complex has opened to further boost the prosperity of the North Bund waterfront.

Raffles City The Bund is located in the core region of the Huangpu River waterfront. It covers about 420,000 square meters above Metro Line 12's Tilanqiao Station.

The new landmark shopping mall, nicknamed "Inspiring City," is intended to be an integrated platform for culture, art, technology and tourism, according to Hongkou government.

Over 200 business tenants, accounting for 92 percent of the capacity, have been attracted to the complex. More than half of the businesses are new to China, East China or Shanghai.

Construction has also been completed on a new landmark building on the North Bund which will include a new state-of-the-art theater.

The new-look North Bund, listed as a "new engine" of growth for Shanghai, includes a central business district with high-density office buildings and commercial facilities. The riverside region, covering about 4 square kilometers, will meet the same high standards of Lingang Special Area and the Pudong New Area in the east of Shanghai.

These include dozens of top-level office buildings which will house about 100 headquarters of multinational firms, international organizations and functional institutes.

The district has organized an expert panel and a chief architect office to guide the development and construction of the site.

A number of the world's top architects and urban planners have been appointed, while seven leading global architecture design institutes have been invited to take part in the development campaign.

Detailed planning has been completed for the skywalks, central park, underground space, industrial functions and management of the central business district.

The soliciting of designs from around the world for over 20 other skyscrapers on the waterfront has also begun.