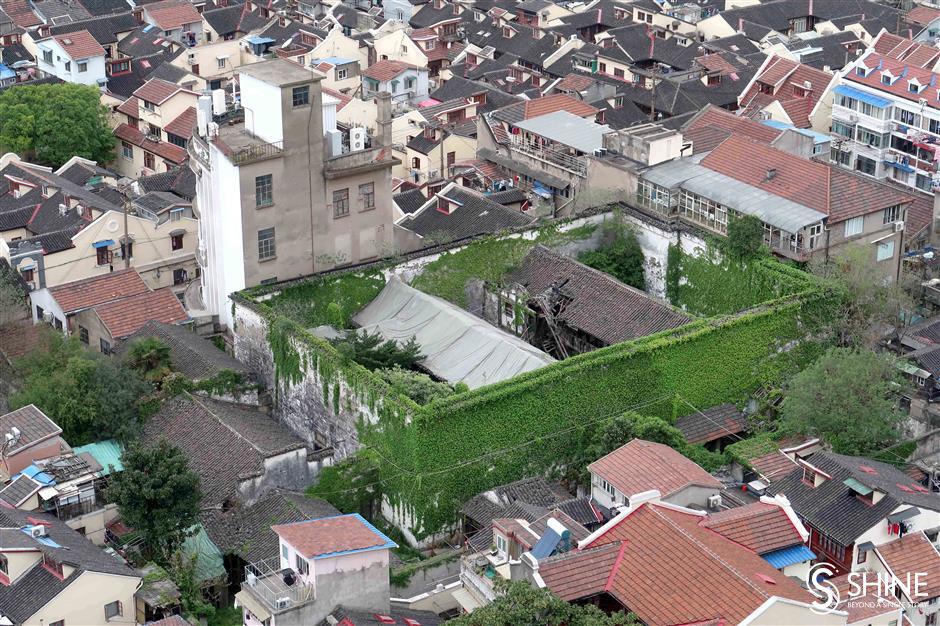 The Shuyin Lou mansion tucked away in the core area of Shanghai's old town.

An emergency renovation project has been launched on one of Shanghai's last remaining Qing Dynasty residences in downtown, dating back more than 250 years.

The Shuyin Lou mansion at 77 Tiandeng Lane in Huangpu District is undergoing structural reinforcement along with termite elimination, grass removal as well as fire prevention and preservation measures, the district government said on Wednesday.

The ancient mansion, and also a private library, was first built in 1763 and is the only completely preserved Qing Dynasty residence and Suzhou-style private mansion in downtown Shanghai now. Its name literally means "concealed books."

It was listed as one of the three venerated libraries in Jiangnan, or the area south of the lower reaches of the Yangtze River, during the Qing Dynasty (1644–1912), along with the prestigious Tianyi Ge in Ningbo and Jiaye Tang in Huzhou.

While the ancient libraries in neighboring Zhejiang Province have been key heritage structures under protection and have become popular tourist destinations, the Shuyin Lou, their counterpart in the core area of Shanghai's old town, is unfamiliar to even locals and is in a precarious condition.

Thick ivy has crawled over the high yard walls and roofs. The yard is covered with velvety moss and lush weeds. And the buildings are nearly crumbling. 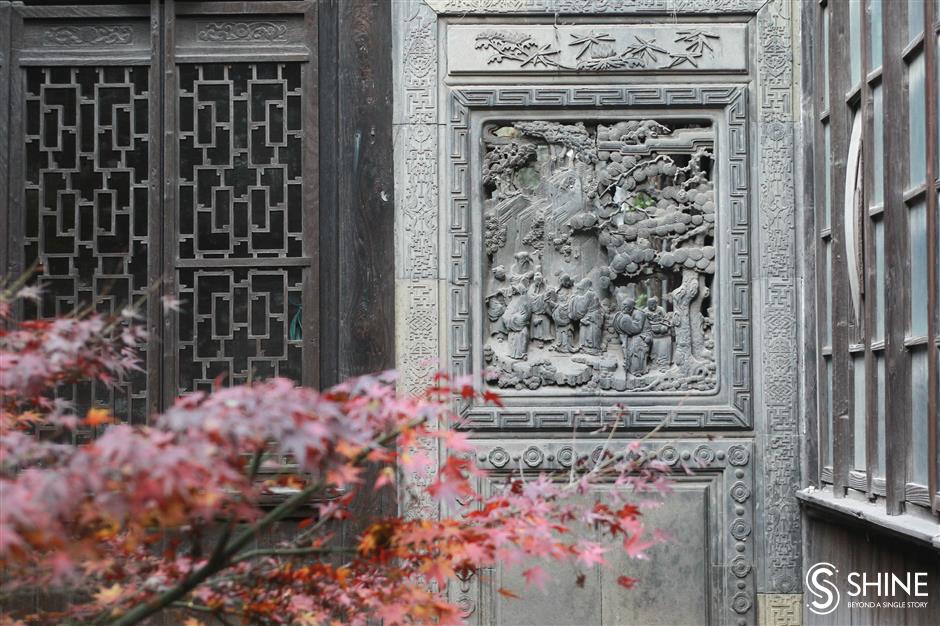 A delicate stone carving in the Shuyin Lou mansion.

"When we first entered the complex, part of the houses had collapsed, while other buildings were on the verge of collapse. The wooden parts had been severely eaten by termites," said an official with the Shanghai Urban Renewal Development Co, which is in charge of the renovation.

"It was quite urgent to repair the houses and remove risks immediately," he added.

Though the Shuyin Lou mansion was also a city-level listed historic structure with a protective status, the complex was privately owned by a local family surnamed Guo and thus lacked proper maintenance for decades.

As the group ownership kept getting transferred among Guo's children, the building was owned by 21 landlords living around before it was eventually purchased by the government. The special situation made it difficult to provide timely maintenance for the buildings.

The mansion was first built by a Ming Dynasty (1368-1644) official as a part of the Suzhou-style Rishe Garden. The wealthy Lu family from Pudong – the same Lu family that lent its name to modern-day Lujiazui – purchased and converted the mansion into a private library. 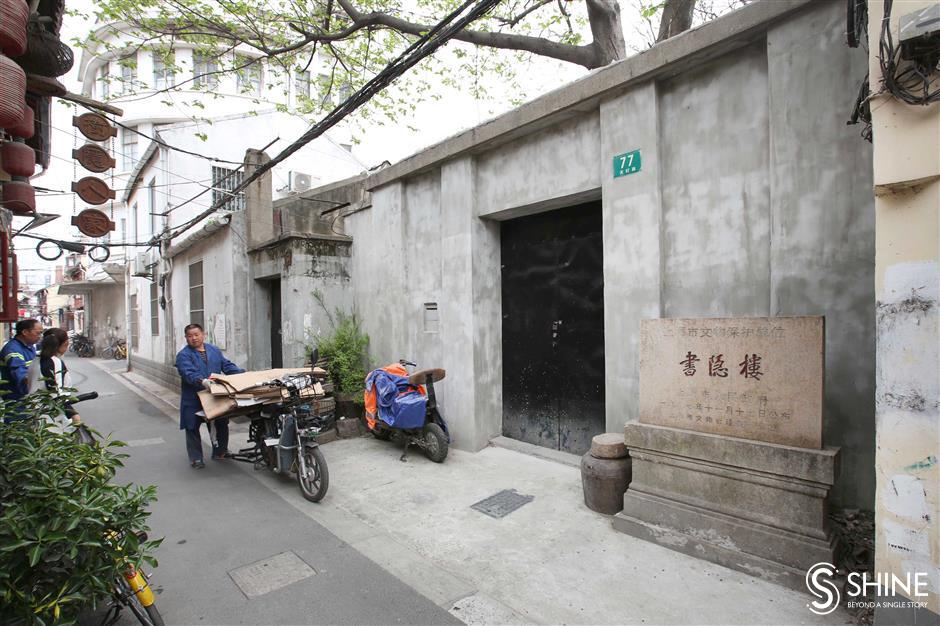 A stone tablet shows the protective status of the mansion.

The Guo family bought the library in 1881. The remaining part of the structure, covering some 1,500 square meters, was owned by six brothers in the 1940s. Their children later moved to the United States, Australia and Finland. Only Guo Junchun, the youngest of the brothers, continued to live in the houses until 1995 when the condition of the complex became too precarious to live.

Zhang Guoliang, a senior relocation official of Huangpu District, said his team spent a year and half to contact all the 21 landlords of the building to transfer the ownership to the government for maintenance.

"Though the owners hold different opinions on the property assignment, our common wish is to preserve the historical complex," said Zhang.

An experts panel was set up to draft a renovation plan. The emergency renovation project was then launched to protect the historical structure according to the original design charts, documents and file photos.

"There will be minimal interference with the structures while ensuring their safety," the renovation official said.

A canopy will cover the open-air courtyard of the mansion to protect the wooden structure from rain. The wooden window and door frames will also be wrapped in removable water-proof clothes. The land subsidence is being monitored for further protection efforts.

The renovation team has also collected the broken parts of the houses and numbered each of the pieces for future reassembling.

Many delicate wood and stone carvings, mainly drawn from Chinese mythology, have been well-preserved in the buildings. 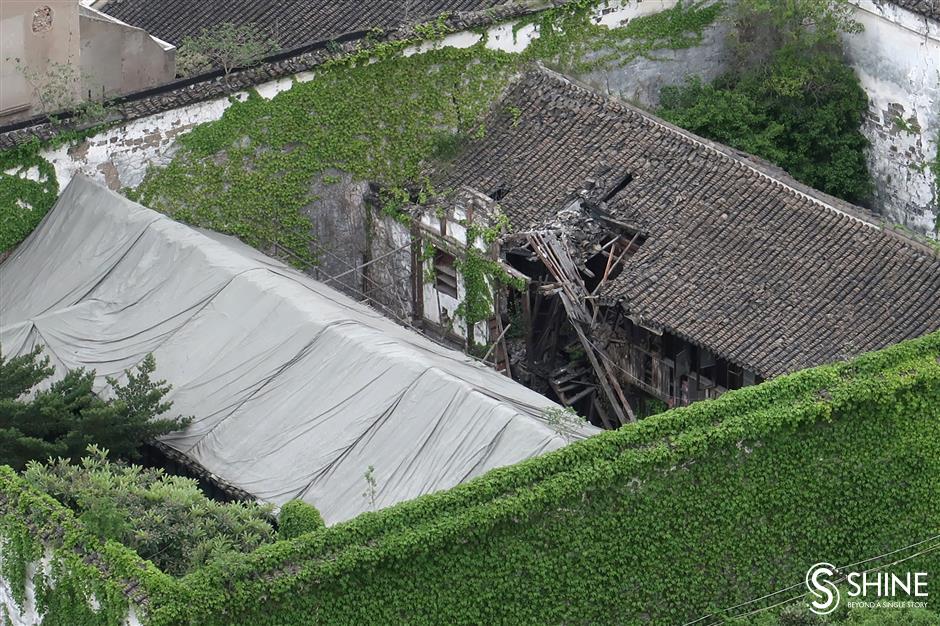 The roof of the mansion has nearly collapsed. 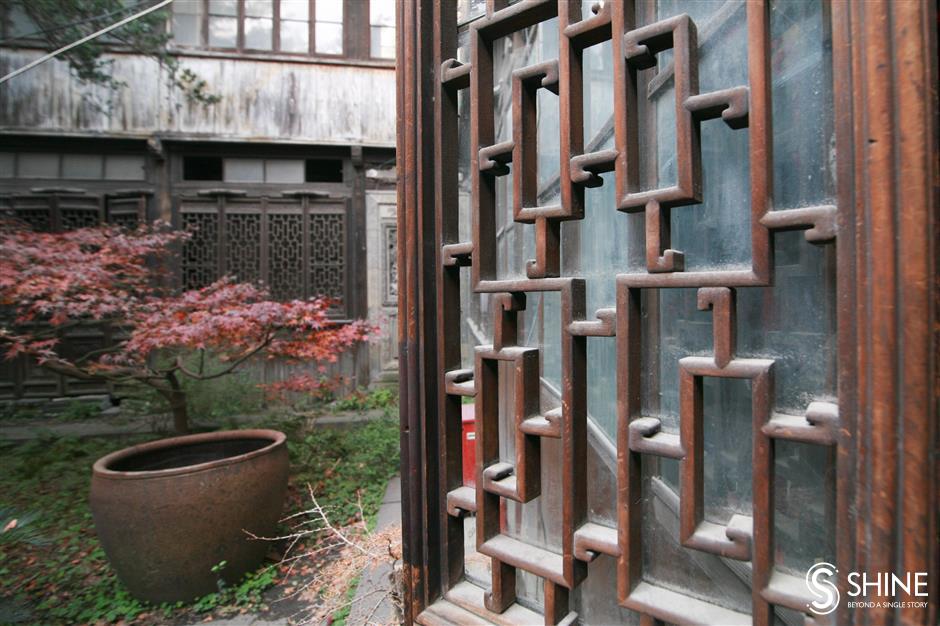 A remaining wooden door frame of the mansion.