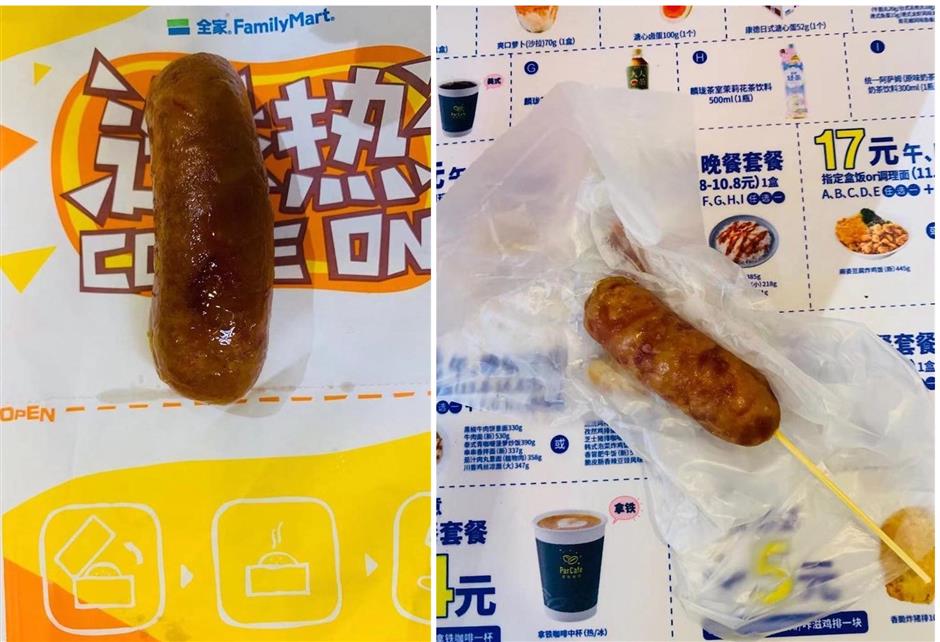 Market regulators in Yangpu District will investigate two FamilyMart convenience stores for suspicious violation against the food safety law after they were exposed to be selling stale sausages.

A consumer said he bought a few roast sausages at two outlets of FamilyMart on Dalian Road and Zhangwu Road on August 22. The sausages were found to show signs of staleness, such as black spots and abnormal hardness.

"The food was cold when purchased and staff heated them in the microwave oven," said the man surnamed Zhou.

"I was told by a worker of the Dalian Road store that the sausages were made one day ago," he said.

The man said he suffered from diarrhea after eating the sausages.

Zhou made a recording of the process and exposed it to the media.

FamilyMart said it bans the sale of roast sausages if they are kept for four hours or longer.

The two convenience stores have been ordered to undertake self-examination and make rectification, FamilyMart said.

It said it would enhance staff training and raise awareness of food management among its workers nationwide.

No food safety problems were spotted at the on-the-spot inspections, the administration said.

FamilyMart has come under fire several times in recent years.

Its Shanghai company was investigated last year after an advertisement on its WeChat account implied pornographic content.

Its headline had obvious sex implications and promoted vulgar content, which is against social morality, the Shanghai Administration for Market Regulation said.

A year earlier, three batches of bento sold by FamilyMart at two outlets in Shanghai were found to have excessive bacteria, such as Escherichia coli and Bacillus cereus.

Escherichia coli can lead to gastrointestinal infection and urinary tract infection under certain conditions, while Bacillus cereus may cause food poisoning with symptoms of abdominal pain, vomiting and diarrhea, doctors said.