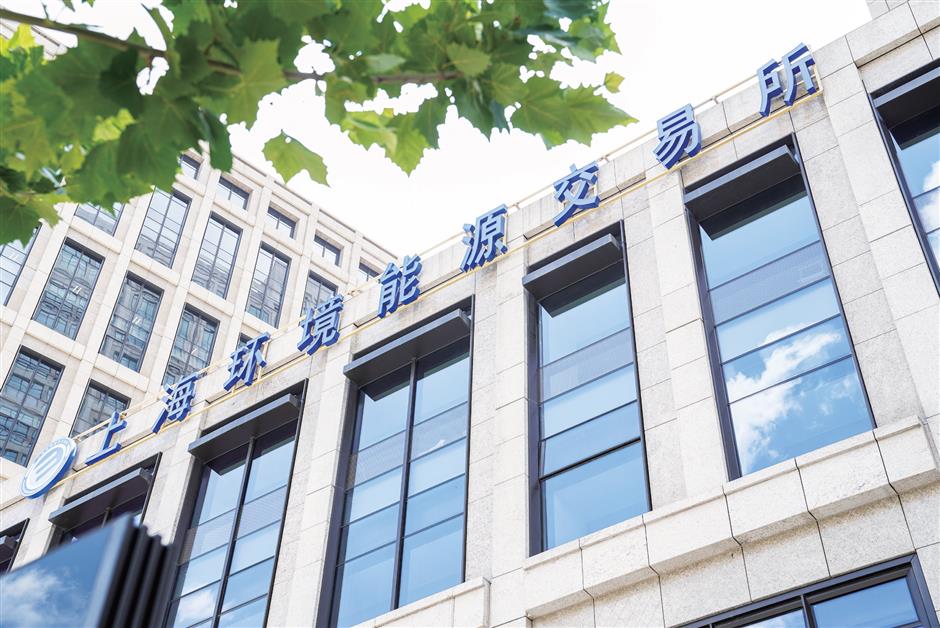 The world's largest carbon trading market has been launched on the North Bund in Hongkou District, a significant step to help the country reduce its carbon footprint and meet emission targets.

Its location along the Huangpu River waterfront is set to become China's first "carbon financial center."

The waterfront, listed as a "new engine" of growth for Shanghai, features a central business district with high-density office buildings and commercial facilities.

Carbon emissions by more than 2,000 power companies involved in the first trading group are estimated to exceed 4 billion tons per year, making the market the world's largest in terms of the amount of greenhouse gas emissions covered.

The exchange on the North Bund is in charge of the construction, operation and maintenance of the national carbon market trading system.

Carbon trading is the process of buying and selling permits to emit carbon dioxide or other greenhouse gases.

Companies are assigned quotas for carbon emissions and can sell surplus emission allowances to those that expect to exceed their pollution quotas.

Trading in carbon emissions will take place from 9:30am until 11:30am and then between 1pm and 3pm from Monday to Friday.

The market has attracted more than 2,000 electric power companies. In the future, the main traders will gradually expand from the power industry to other key emission industries, he added.

It is necessary to further strengthen top-level design, refine the roadmap, arrange for more industries and trading entities to be brought into the market, and enrich trading varieties to help the carbon market play a better role in controlling greenhouse gas emissions, according to the exchange.

China's national carbon trading market was launched in 2017 after pilot operations in seven provincial-level regions in 2011. Behind its launch was the aim of exploring market-based mechanisms to control greenhouse gas emissions.

The exchange was established on August 5, 2008 and settled in Hongkou District in 2009 as the nation's first environmental energy trading platform.

Shanghai's carbon market currently has three major trading varieties. By the end of June 2021, the cumulative trading volume of various types of carbon in Shanghai had reached 166 million tons, with a total transaction volume of 1.857 billion yuan.

Lai said the exchange is striving to build a carbon trading and pricing center with global influence.

China has pledged to reduce domestic carbon-dioxide emissions in an international effort to keep global temperatures from rising more than 2 degrees Celsius above pre-industrial levels – part of the 2015 Paris Agreement on climate change.

The country is striving to peak carbon dioxide emissions by 2030 and achieve carbon neutrality by 2060. 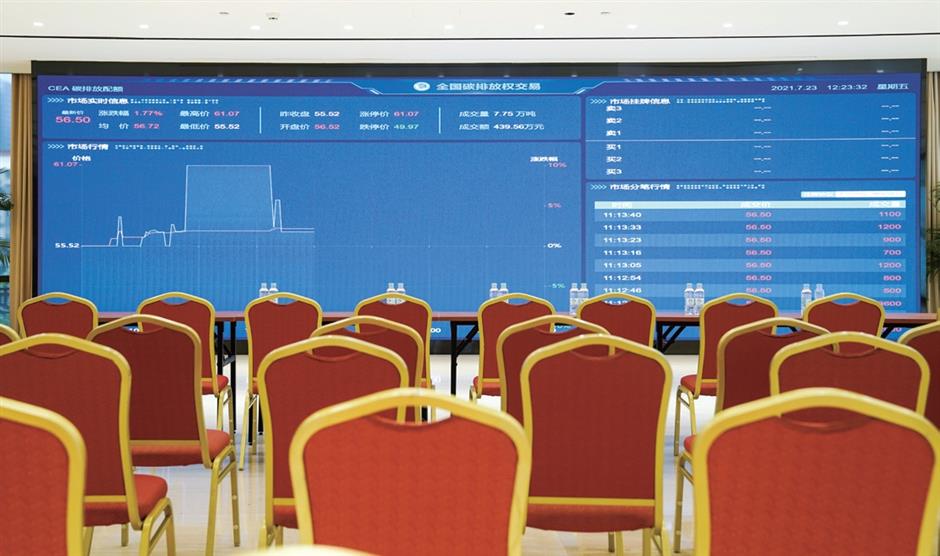 To achieve the goal, the city will create a highly efficient and clean-energy system. Energy from fossil fuels will be controlled and gradually replaced by renewable forms of energy, and a new electric power system based on green energy will be developed.

Hongkou District has launched various efforts to strictly control industrial pollution, with green manufacturing, construction and transportation being promoted, according to the district government.

New technologies will reduce pollution and carbon emissions, while preferential policies on finance, taxation, pricing and land will be optimized. More wetlands and forests will be created to help reduce carbon emissions.

Shanghai has launched the eighth round of a three-year plan to improve the environment between 2021 and 2023. More than 200 key projects have been planned for water, air, soil, solid waste, agriculture and ecology.

The Ministry of Ecology and Environment has announced a roll out of trading regulations and improved relevant standards and management schemes while expanding the varieties and methods of trading.

As data authenticity and accuracy are the bases of trading, the ministry will work to ensure the quality and transparency of emissions data.

The carbon market is also expected to be an important scheme for China in realizing its goals of peaking carbon dioxide emissions by 2030 and achieving carbon neutrality by 2060.

Pursuing a green growth path, China has been working on all fronts to transform its coal-centered energy structure and build a clean and diversified energy supply system, according to the ministry.

By the end of 2020, more than 40 percent of China's installed power generation capacity came from renewable resources, supporting nearly one-third of the country's electricity consumption, according to data from the National Energy Administration.

As a result, 15.9 percent of China's primary energy consumption came from non-fossil energy, surpassing the target of 15 percent set for 2020.