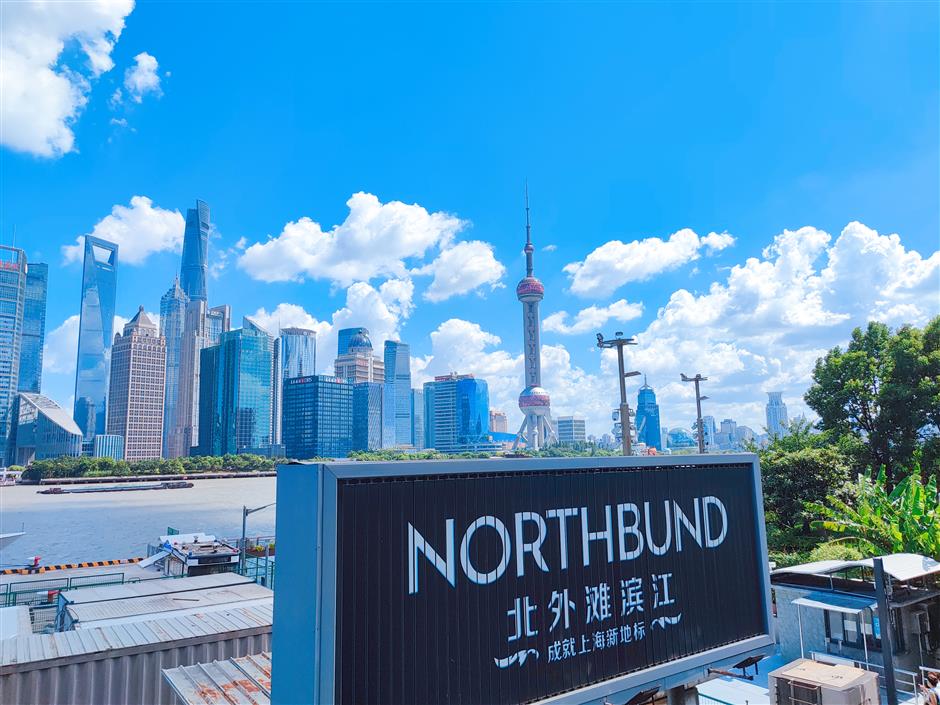 The North Bund waterfront is one of the most scenic and historic sections of the entire riverbank.

The North Bund at the confluence of the Huangpu River and Suzhou Creek in Hongkou District is captivating people with great river views, ecological gardens and well-preserved historic sites.

Starting at the intersection of the Suzhou Creek and Huangpu River walkways on the North Bund, one can stroll alongside 900 meters of river that flows through Hongkou District as well as the 2.5 kilometer-long riverside path.

The North Bund waterfront is one of the most scenic and historic segments of the riverbank.

The area, in the southern part of Hongkou District, covers about 4 square kilometers within the confines of N. Henan Road, Haining-Zhoujiazui Road, Dalian Road and the Huangpu River and Suzhou Creek.

The 2.5 kilometer-long riverside area opened to the public in 2017 as part of the city government's project to open 45 kilometers of continuous paths on both sides of the river.

The history of the North Bund dates back to the late 19th century. The British East India Company built the first barge dock between Dongdaming and Gaoyang roads in 1845, two years after Shanghai opened its port to global business. Over 20 docks and a dozen warehouses lined the waterfront, making it the most important shipping port in the city.

The North Bund possesses other distinctions. China's first electric lamp was illuminated there, and it was also the site of the nation's first telephone call and first movie. Because of its ports, the area absorbed culture, both from China and the world, during the 20th century.

During World War II, the shikumen, the unique Shanghai stone-gate residences, in the North Bund offered safe haven for many Jewish refugees fleeing the horrors of Nazi Germany. About 23,000 Jews found shelter in the city, particularly in the Tilanqiao area of the North Bund.

Many historical structures have been preserved and turned into cultural venues. They include the Shanghai Jewish Refugees Museum, which incorporates the historic Ohel Moishe Synagogue; the Dock Culture Museum; and the China Securities Museum, renovated from the famous Astor House Hotel. The Yung Shine Warehouse, known as the largest storage site in the Far East, dating back to the 1930s, is now being converted into Shanghai Fintech Park.

According to the blueprint, the riverside business district will include lifestyle and recreation elements and more convenient transport. It will focus on the ecological environment and develop more public space for residents and tourists.

The area also boasts a distinctive appearance, blending modern high-rises and historical buildings, mainly around the Tilanqiao area and Hongkougang River, from which Hongkou District got its name. 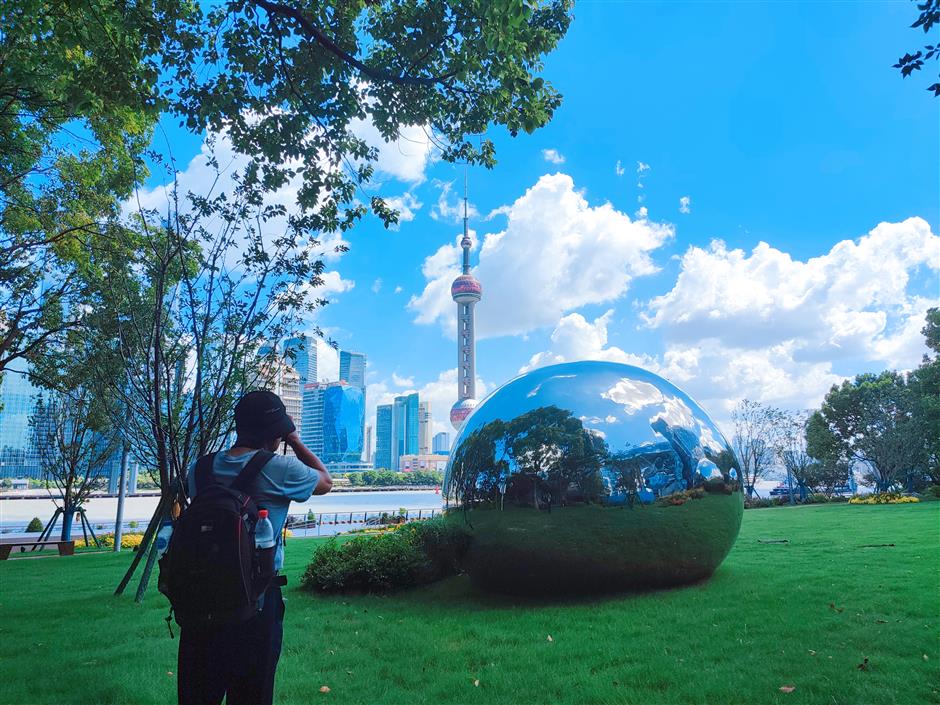 A tourist takes a photo from the Lujiazui financial hub on the opposite of the Huangpu River from the North Bund in Hongkou.

The Beisuzhou Road walkway, opened in December, is one of the most scenic segments of the longer creekside path, featuring many preserved historical buildings showcasing the region's former glory.

The Astor House Hotel, for instance, previously known as Richard's Hotel, was founded by the Richard family in 1846 on the Bund near East Jinling Road. It moved to its current location on Huangpu Road near the Waibaidu Bridge in 1857. The hotel once housed Einstein, Chaplin and writer Edgar Snow.

It has since become the China Securities Museum, because the hotel was also where the Shanghai Stock Exchange came into existence in 1990.

Established by the China Securities Regulatory Commission, the museum chronicles the development of stocks and futures markets since 1978 as well as its earlier history dating back to the Qing Dynasty (1644-1911).

The Waibaidu Bridge, also known as the Garden Bridge, was constructed in 1907 as the first large bridge in Shanghai and one of the city's most beautiful bridges over the creek.

Broadway Mansions, a grand Art Deco hotel, was built in 1934 as a modernist icon that boasts one of the best views of the city.

The Embankment Building, once known as the "No. 1 Apartment Building of the Far East," is still a residential complex, and has received a major facelift to restore its original look.

The Beisuzhou Road portion along the creek has been converted into a pedestrian-only street. The road and riverside pathway have been greatly expanded.

In April, a nighttime bazaar was opened along Suzhou Creek in Hongkou District to create a demonstration of the cultural and tourist attractions on the North Bund.

It attracted numerous citizens and tourists, mainly young customers, with handmade clothes, cultural souvenirs and daily commodities at many stalls along the pedestrian-only street, as well as food and street performances.

"The newly unveiled nightlife market aims to develop a comfortable public space during the North Bund's ongoing development," the Hongkou District government said. It is expected to become one of the most popular social and entertainment attractions in the area.

At the opening session of the market, 50 models wearing hanfu walked among visitors and posed for photos. Street artists and musicians offered live performances. Wine and spirits from both home and abroad were available.

Along the creek, the stone-paved pedestrian street and lighting in the style of early gas lamps give a pleasing, uniform look to the landscape. A variety of trees and flowers have replaced monotonous evergreen trees and shrubs, turning the street into a garden-like public area.

Sculptures and installations that reflect the history of the area enhance the environment. They include a sculpture of a newsboy, a green postman's bicycle and manhole covers adorned with iconic pictures that appeared on old souvenir bags from Shanghai.

Beisuzhou Road has been designated as a top-class fashion center featuring haipai, or the West-meets-East Shanghai-style culture, and traditional Chinese culture, according to district officials.

More themed activities will be conducted along the pedestrian street to help invigorate business in the surrounding areas and highlight the charm of the North Bund region, the district government said. 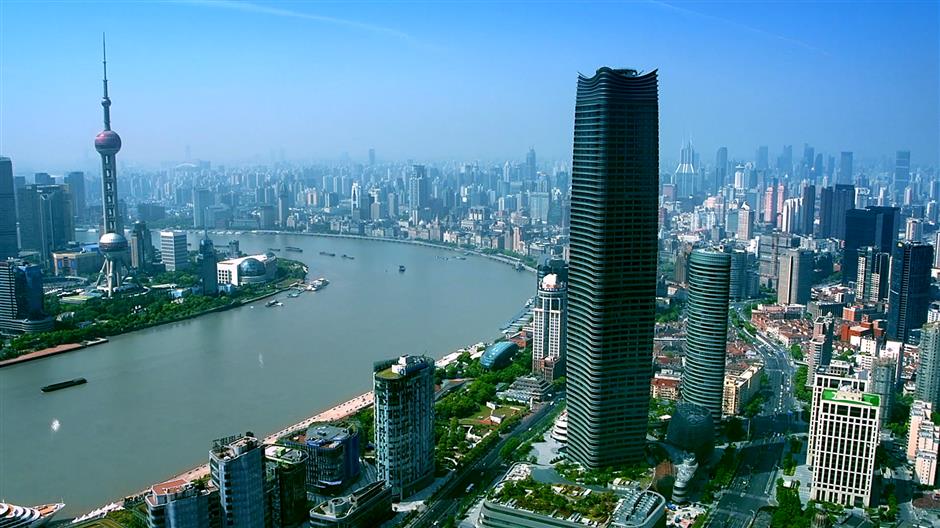 On the other side of the Waibaidu Bridge, a new round of development has commenced along the Huangpu River waterfront in a bid to recapture its historical grandeur as a gathering place for the world's top shipping businesses and intellectuals.

The riverside region is part of Shanghai's "golden triangle," along with the Lujiazui financial hub in the Pudong New Area and the Bund in Huangpu District. The latest development plan's blueprint released by the city's planning authority includes more economic, scientific and cultural elements to create a "world-class parlor" of Shanghai.

About 8.4 million square meters of new office space has been planned that will be home to nearly 100 international companies and organizations. The new office buildings will generate an annual tax revenue of more than 100 million yuan, while the number of multinational firms based in the riverside region will significantly expand.

As a highlighted project, construction will begin on a 480-meter high-rise building, covering an area of about 350,000 square meters. The building is earmarked to drive the development of high-end industries and become a home to global enterprises.

The plot of land near Dantu, Dongchangzhi, Gaoyang and Tangshan Roads will see 24 percent of its area used for commercial enterprise, restaurants and hotels, while the rest will be used for offices.

Smart technologies will be widely implemented in the area, which is being developed into a hub for the use of 5G technologies.

The riverside space will remain focused toward the shipping and finance sectors with additional office buildings available for multinational headquarters. It will also develop supplementary businesses such as exhibitions, education, culture, hotel and life services, according to urban planners.

Planners have researched global urban planning experiences and practices in London, New York and Tokyo to help shape their master plan, according to the district government.

An international community to accommodate 70,000 international professionals will be built along the river, with sports and recreation, health and medical as well as international education facilities to serve the residents.

Another highlight will be a "slow walking zone" covering 500,000 square meters. Half the zone will be vehicle-free to allow citizens to enjoy the space in the heart of the business district.

More convenient public transport, such as subway lines and buses, will connect the North Bund with the Bund in Huangpu District and Lujiazui in the Pudong New Area.

Commuters are expected to get to the city's suburbs, including Shanghai East Railway Station and Pudong International Airport, within 90 minutes, and to the new towns on the city's outskirts within two hours from the North Bund.

The Hongkou transport commission wants citizens and tourists to be able to locate a subway station within 600 meters or a bus station within 300 meters' walk, no matter where they are located in the riverside region.

Smart parking, public transport and roads will be developed across the riverside area. It will have a public parking electronic payment and guidance system. More than 80 percent of the bus station facilities will be able to collect data, manage traffic and publicize information, thanks to smart technologies.

In the future, it will be convenient for people to get to the Lujiazui financial hub, the former World Expo site, the Qiantan area and Pudong International Airport in the Pudong New Area from the North Bund, via multiple Metro lines operating through the vicinity.

Three Metro lines – 4, 10 and 12 – are already running beneath the North Bund, while a new one, line 19, will extend to the waterfront in the near future.

The waterfront will also feature a slow transport system to serve pedestrians. The blueprint reveals car-free zones will be developed in the region as a pilot scheme for furtehr expansion across other riverside regions of the city.

Skywalks will connect public transport stations, main office buildings and sightseeing platforms. An underground space is to be developed beneath the core region of the North Bund. The skywalk, ground and underground paths will create a safe, connected, convenient and comfortable "slow walking zone."

In the future, the transportation development in the North Bund will meet the demands of citizens and tourists and allow people working and living there to travel conveniently and comfortably. 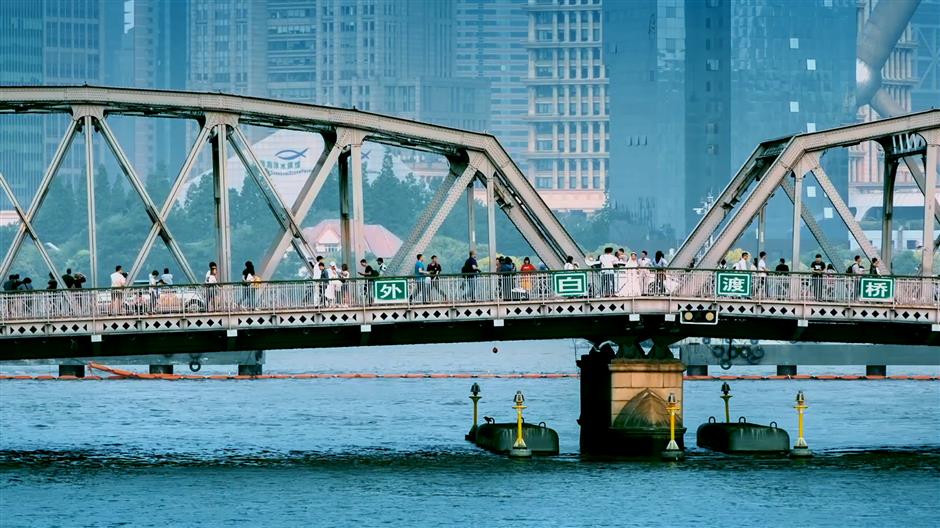 Visitors can walk or cycle from Waibaidu Bridge to Qinhuangdao Road along the river through new paths that serve walkers, joggers and cyclists.

Luxun Park is the site of the tomb of Lu Xun, considered the father of modern Chinese literature. Chairman Mao inscribed the "Tomb of Mr Lu Xun" on the large granite tombstone.

Music Valley has a historic former 1930s slaughterhouse that has been converted into the 1933 Old Millfun, which now hosts workshops, studios, bars and cafes.

To commemorate its glorious history, the Shanghai Docks Heritage Museum has opened as a major attraction. The museum, located within a riverside park, includes industrial relics, sculptures, videos and historic exhibitions about the docks.

The museum highlights the history of celebrities and renowned scientists who entered Shanghai from these docks, including Albert Einstein and Charlie Chaplin.

The old S.C. Farnham & Co site was the first large-scale shipyard in Shanghai, built by British company Boyd and Co in 1862. The structure, situated at 388 Dongdaming Road, is among the best British industrial properties in the city.

Other heritage sites include the former location of the American Jewish Joint Succour Committee, built in 1910 on Huoshan Road, the Tilanqiao Prison on Changyang Road, known as the first prison in the East Asia, the 1933 Old Millfun, once the slaughterhouse of the Shanghai municipal council, the Shanghai Jewish Refugees Museum and the historic Ohel Moishe Synagogue.

Visitors can also tour around Xiahai Temple on 73 Kunming Road, which was initially built during the reign of Emperor Qianlong (1736-1795) of the Qing Dynasty. 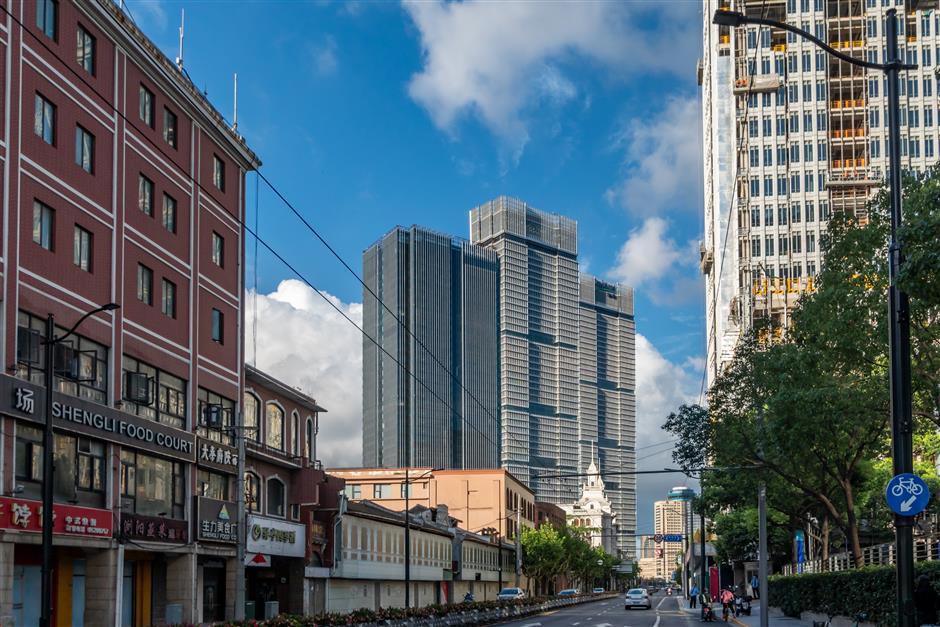