Metro lines and bus routes suspended with the arrival of typhoon

The affected lines include Metro Line 2 between Zhangjiang Hi-Tech Park and the Pudong International Airport, Line 5, Line 16, the Pujiang Line and the maglev.

Shanghai Metro issued the notice at 12:30am on Monday.

Most of the affected lines are located in the Pudong New Area, with some passing through densely populated zones.

The Pudong public transportation authority said it had prepared 10 buses to shuttle Metro passengers from Heshahangcheng Station on Line 16 to Shenmei Road Station on Line 18 beginning at 6:30am.

In Chongming District, the Shenchong Line 7 and Hengchang Line buses are not in service due to the suspension of ferry routes between Changxing Island and Hengsha Island.

Also, 150 long-distance buses departing from Shanghai and passing through neighboring Zhejiang and Jiangsu provinces were suspended.

All ferries crossing the Huangpu River were out of service on Monday, and the Fuxing Road Tunnel under the river was closed to motor vehicles to enable bikers and e-bikers to cross the river. Huangpu District police led the way for bikers to safely pass through the tunnel. 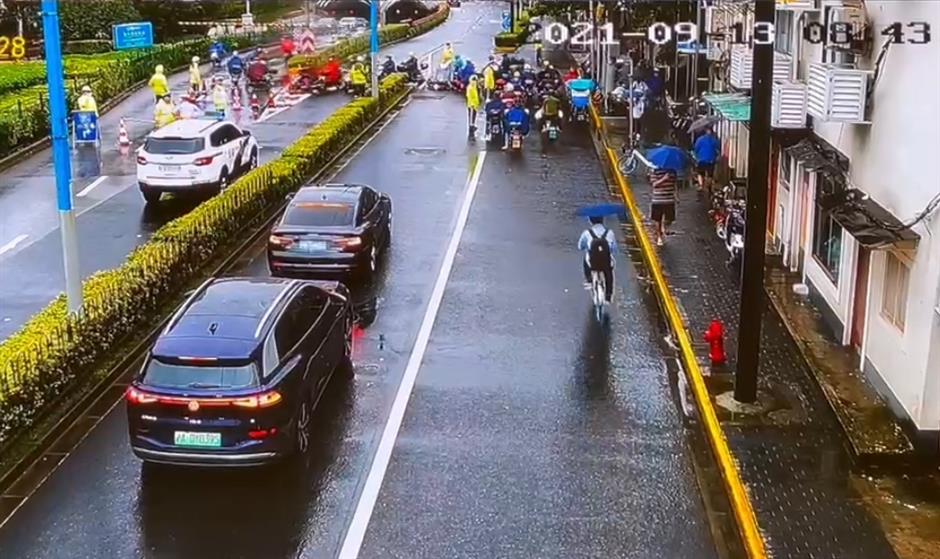 Police lead the way for bikers crossing the Huangpu River through the Fuxing Road Tunnel.