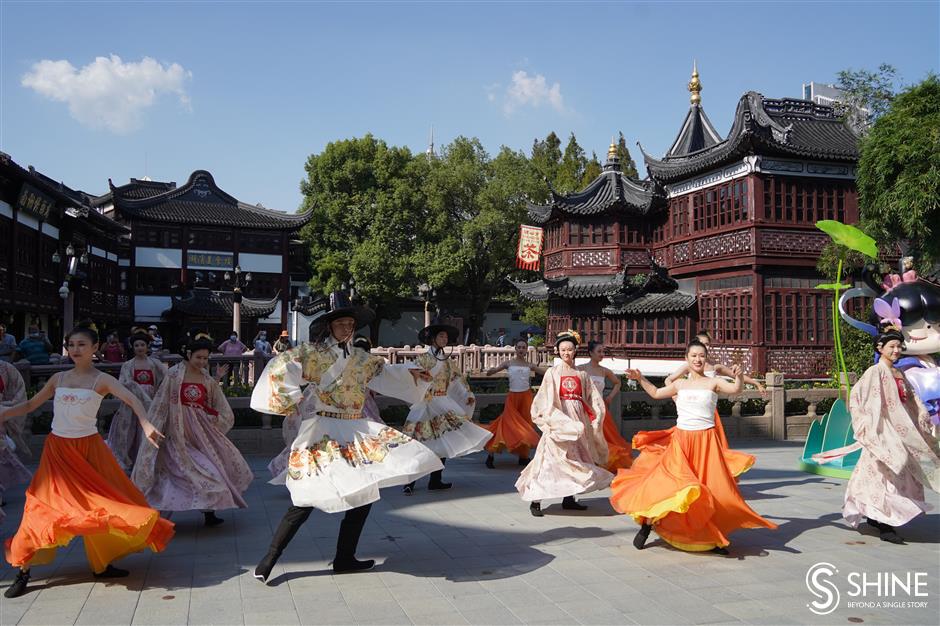 Dancers dressed in Tang Dynasty costumes perform near the Zigzag Bridge at Yuyuan Garden on Thursday to celebrate the qiufen solar term.

Drum, music and dance performances are being held across the malls, the dining and shopping facilities near the historic city garden, through Saturday to restore the folk customs for autumn and harvest dating back to the Tang Dynasty (AD 618-907).

Some of Shanghai's traditional customs during qiufen are presented through songs and dances, such as cricket fighting, worships to the moon and making the egg stand.

Qiufen, usually happens in late September when the sun's elliptical longitude reaches 180 degrees around this time, with cool weather covering most regions in China.

With osmanthus and chrysanthemum flowers blossoming and hairy crabs entering their best period, it is also a busy time for farmers who will have multiple tasks to complete, including harvesting, ploughing and planting. 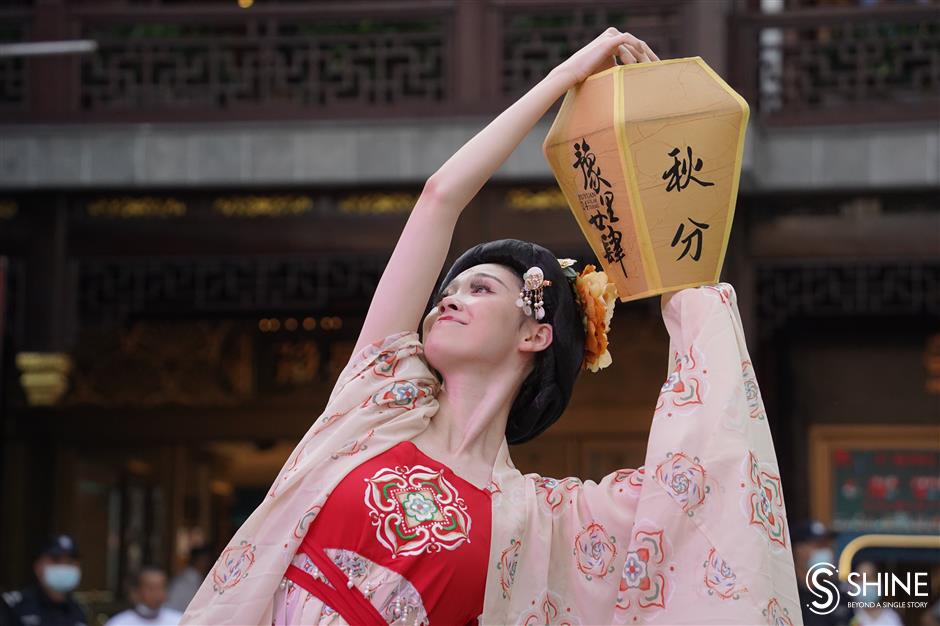 A dancer dressed in the Tang Dynasty costume performs with a lantern at the Yuyuan Garden Malls on Thursday.

The popular Yuyuan Garden lanterns, a listed cultural heritage of the city, are on show at the seasonal exhibition for the qiufen.

A set of lanterns displays the fully-bloomed osmanthus and chrysanthemum flowers at the Beaufort Terrace, a stage for traditional Chinese operas and cuisines. Another lantern attraction shows the "carp jumps over the dragon gate" at Wenchang Street to wish success for students in the new semester.

The malls, originated from a prosperous market of the City God Temple some 140 years ago, also unveiled its new mascot Nanci, a cartoon figure wearing the traditional dress of the Han nationality. Popular eateries at the malls, such as the Mid-Lake Pavilion teahouse and the century-old Nanxiang Steamed Bun Restaurant, have launched Nanci-themed food items.

Kunqu operas are being presented at the Beaufort Terrace with classic operas related to the autumn season through October 10. 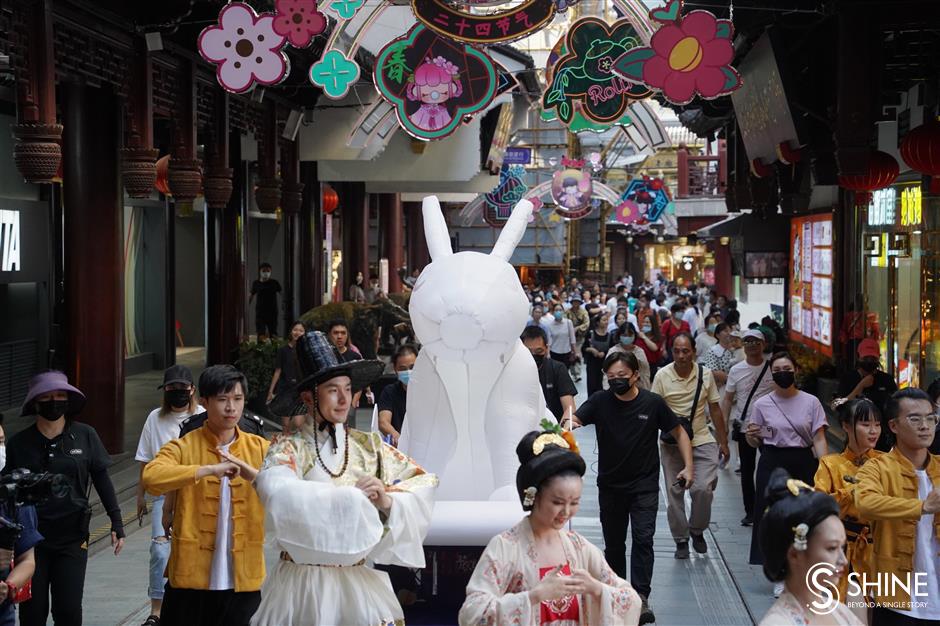 The malls have launched a campaign themed on the 24 Solar Terms to promote traditional culture while boosting consumption amid the COVID-19 pandemic.

Tourists and citizens are invited to play various traditional games, learn heritage skills and visit time-honored stores, such as the 238-year-old Tonghanchun TCM pharmacy, the Mid-Lake Pavilion, Wenchang Street and the Yuyuan Department Store in the six-story Tianyu Mansion on Jiujiaochang Road – a former military drill site during the Ming Dynasty (1368-1644).

Visitors are also invited to play traditional games such as touhu, or arrow throwing, or ring toss. Performers in traditional hanfu clothing will parade across the malls and interact with visitors. Their traditional clothing styles will be adjusted according to the solar terms and traditional festivals. In addition, citizens and tourists are encouraged to dress in hanfu to better experience the historical atmosphere. 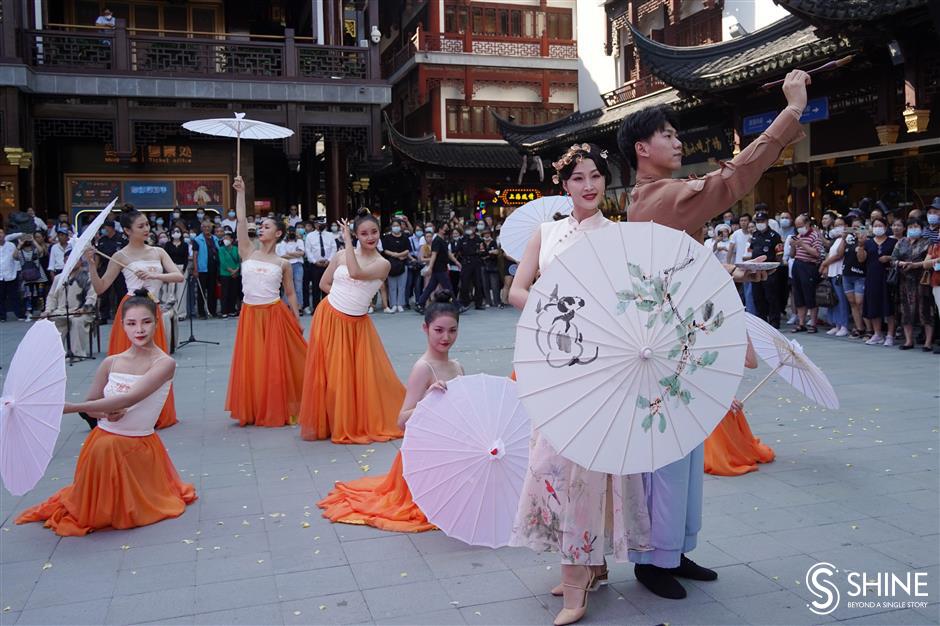 Dances and performances, blending modern and traditional styles, are presented at the malls.