City revs up support for WorldSkills 2022 from consular officials

About 40 consular officers in Shanghai from 30 countries, including France and Denmark, have been briefed on preparations for the 46th WorldSkills Competition at an event signaling the one-year countdown to the world's largest skills competition.

Shanghai will be host city for the event which is to be held on the Chinese mainland for the first time.

A briefing on the history and development of WorldSkills International, the WorldSkills Competition and China's preparation to host the 46th event was provided by Zhao Yongfeng, director of Shanghai Human Resources and Social Security Bureau and secretary-general of WorldSkills 2022 organizing committee at the Consulate Engagement Event.

Zhao told the consular officers that China joined WorldSkills International in October 2010 as a young member, and it now aimed at organizing a creative and influential WorldSkills Competition.

A leading group, an organizing committee and an executive bureau have been established to make full preparations for the event, he said.

The WorldSkills Museum, a joint initiative of WorldSkills International, China's Ministry of Human Resources and Social Security and Shanghai government, is being developed on the bank of Huangpu River, known as the "mother river of Shanghai."

As the world's first museum to show vocational skills, it will become a global center for the exhibition of skills, a world platform for cooperation and exchange of skills development, an international skills education and training center and an official documentation center.

Zhao said the museum will start its pilot run in July next year and officially open to the public in October 2022 when the WorldSkills Competition takes place.

Many activities have been organized to promote the competition. The WorldSkills flag was brought to the summit of Mount Qomolangma on May 27 last year and the Antarctic on January 19 this year, demonstrating the spirit of pursuing extreme excellence in craftsmanship.

A series of activities have also been held in eight Chinese provinces and cities including Beijing and Shanghai, under the theme of "Keep the Light of Skills on for WorldSkills Competition" on July 15, World Youth Skills Day.

Young influencers, including idols and skill masters, have been invited to be ambassadors to promote the competition and the concept of "Master Skills, Change the World" among young people. 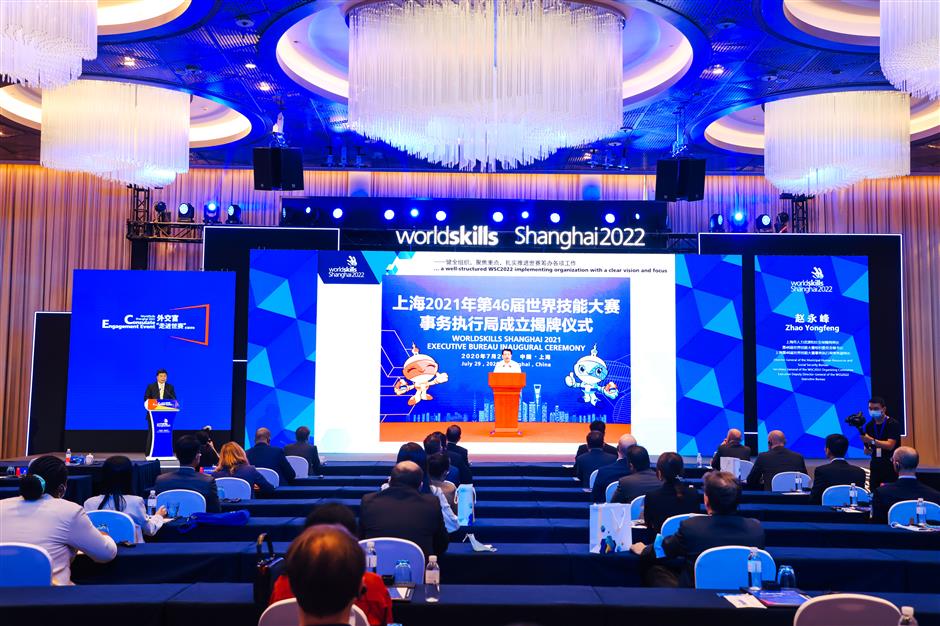 Chris Humphries, president of WorldSkills International, said in a video speech that the WorldSkills Competition in Shanghai in 2022 will be a chance to further raise the global standards of skills and the spirit of young people as they strive for new levels of excellence. He invited all the consular officers to cheer together for the skilled young people on the WorldSkills stage next year.

David Hoey, CEO of WorldSkills International, thanked all people, including the Shanghai team, WorldSkills China, the Chinese Ministry of Human Resources and Social Security Bureau and other partners, for working tirelessly for the WorldSkills Competition in Shanghai.

"WorldSkills Competitions are a huge undertaking, requiring years of planning, meticulous logistical timing, and the gathering of thousands of people, and literally hundreds of thousands of tools, equipment and supplies to create the global showcase of skills excellence," he said.

"WorldSkills raises the profile of vocational education and training and shows how important skills are in achieving economic growth. Thousands of young people from our global community eagerly await this important event. WorldSkills Shanghai 2022 will honor the remarkable efforts everywhere to overcome the challenges of the past two years as we seek to revive and rebuild our world with the power of skills."

Benoit Guidee, consul general of France in Shanghai, said he was confident that WorldSkills Shanghai 2022 would be a success.

Lyon, a historic industrial city in France, will host the next WorldSkills Competition in 2024. It is the second time in the history of the skills international championship for France and Lyon to host the event.

"I'm delighted that the two cities are willing to work hand in hand as a team to turn the two events into successes and promote vocational education and training around the world. I am confident that WorldSkills Shanghai 2022 will set the bar very high and give us a rich legacy to build upon for WorldSkills Lyon 2024," he said.