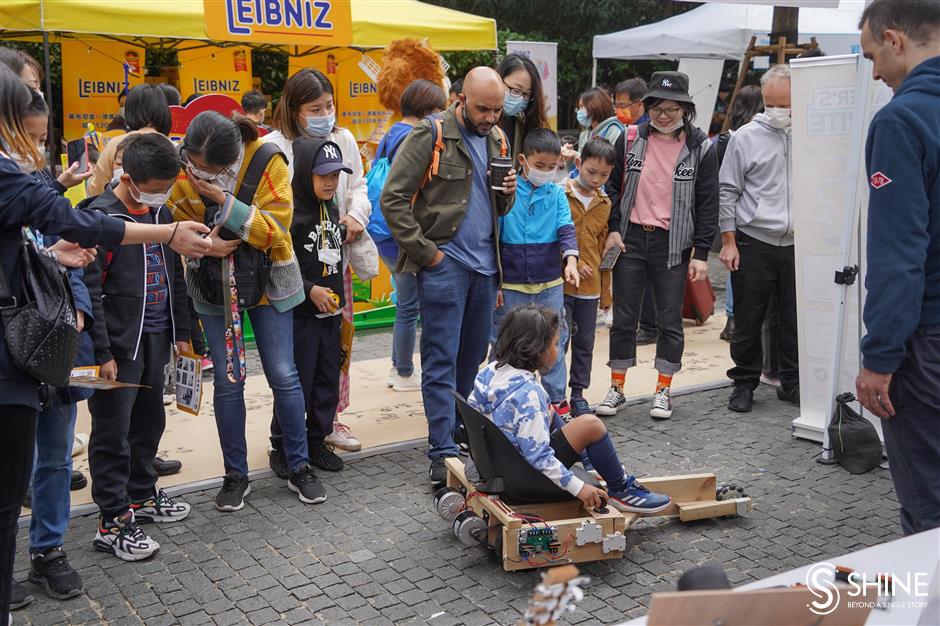 A boy drives a home-made vehicle at Maker Faire Shanghai 2021 on the Bund on Sunday.

Made from recycled paper boxes and with an easy gear, the light and cheap device can be installed at local subway stations, office buildings, shopping malls and other public places where masks are compulsory.

"Over 100 visitors have been attracted to my booth by the invention, which is far beyond my expectation," said Gupta, 11.

About 15,000 visitors, mainly local parents and children as well as expatriates, attended the annual maker faire, the second session in Shanghai, on Yuanmingyuan Road on the Bund over the weekend. It brings the latest technology, creative ideas and innovation to the masses.

Started in 2006 in the San Francisco Bay Area, the movement has since spread to countries all over the world with more than 200 Maker Faire's in places such as Tokyo, Rome, Shenzhen, Taipei, Seoul, Paris, Berlin and Barcelona. 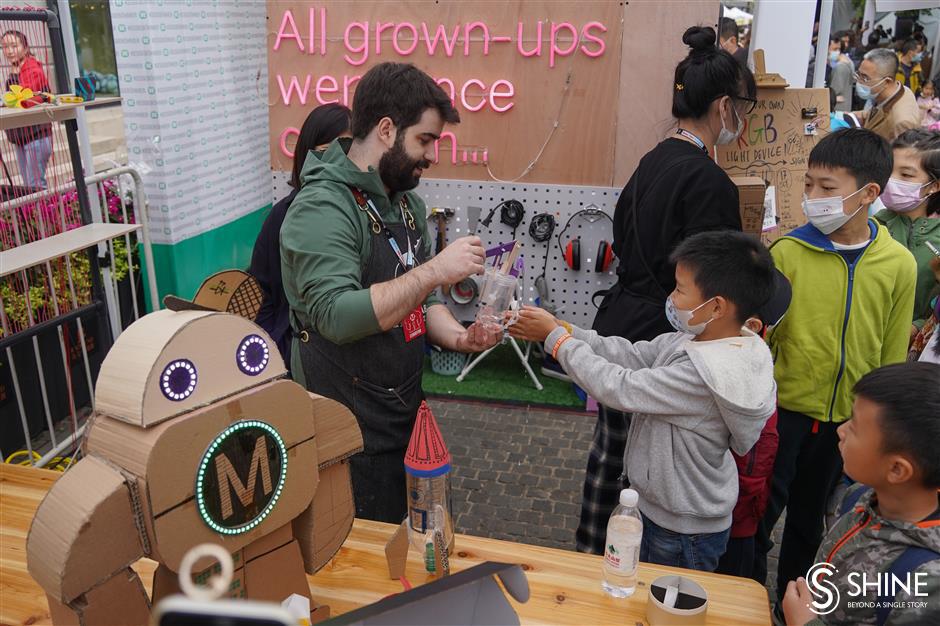 Children take part in various science experiments at the fair.

"The event aims to create a platform for individuals and small companies to showcase their innovative ideas," said Praveen Rao, the co-founder of Maker Faire Shanghai.

"Children are expected to be inspired with various scientific experiments and innovation designs."

The event in Shanghai features more than 60 interactive and engaging booths such as 3D printing, robo-wars, science experiments, learn to code, pottery, wood-working and many other maker/STEAM education activities.

The Tongji University College of Design and Innovation, one of the main exhibitors, set up several booths to showcase the innovative projects of its professors and students, which attracted a large number of parents and children.

Saverio Silli, an Italian professor with the college, said such events encouraged students to introduce their own designs and projects to visitors, while solving various problems themselves during the exhibition arrangement.

"Over 40 students have applied to serve as volunteers at the fair which is helpful and a great opportunity for them," Silli said.

Dozens of stools designed by the students are on display at the event, along with other innovative inventions such as a robotic arm, jewelleries and wood-works. 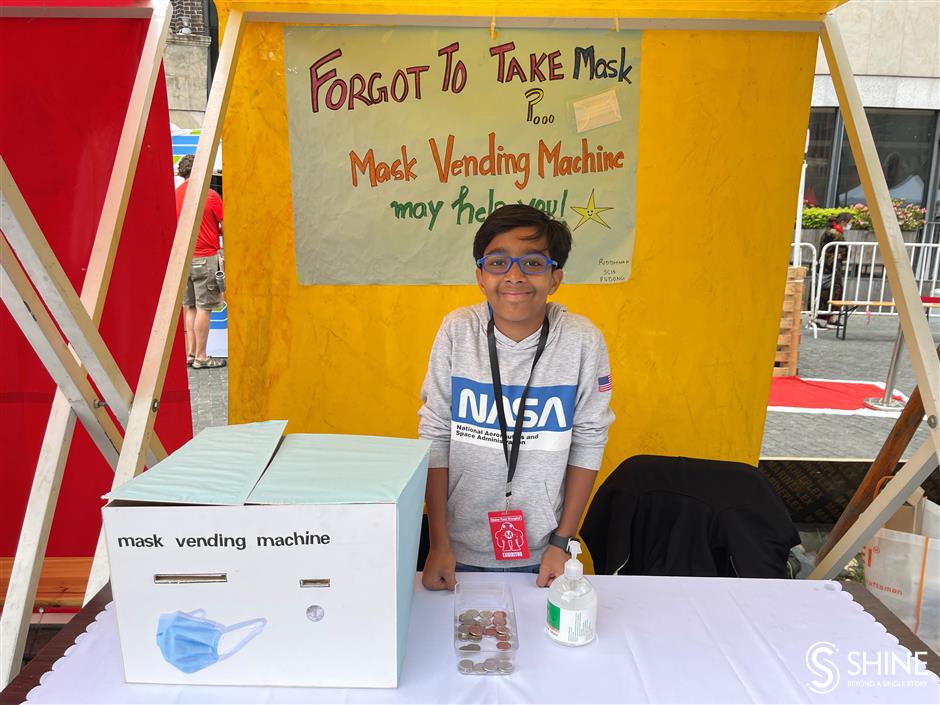 Silli also serves as the vice director of Fablab Shanghai, a leading STEAM (science, technology, engineering, arts and mathematics) education organization. Children are invited to take part in various experiments at the fair.

"An increasing number of parents come to ask about the STEAM classes after the nation's double reduction policy to relive the academic burden of young students," said Hong Jiawei, an official with Fablab.

Earlier this year, China's Ministry of Education issued a set of "double reduction" policies to ease the burden of excessive homework and off-campus tutoring on students.

Tongji Tiandi Innovation & Design Co., a state-own enterprise under the university, transforms the innovative designs from the students into furniture and other products.

"Shanghai has many opportunities and museums for children to expand horizons and learn science knowledge such as the museums and the fair," said Australian Todd Urquhart. He brought his two daughters to the event on Sunday.

A local mother surnamed Zheng said the fair introduced many great extra-curriculum activities to her 12-year-old son after the nation's "double reduction" policy. 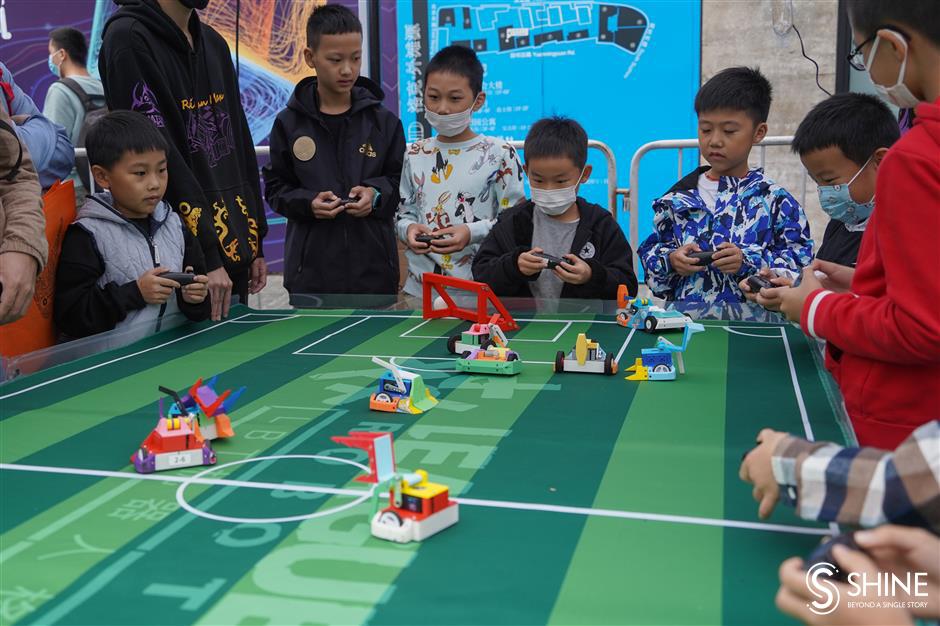 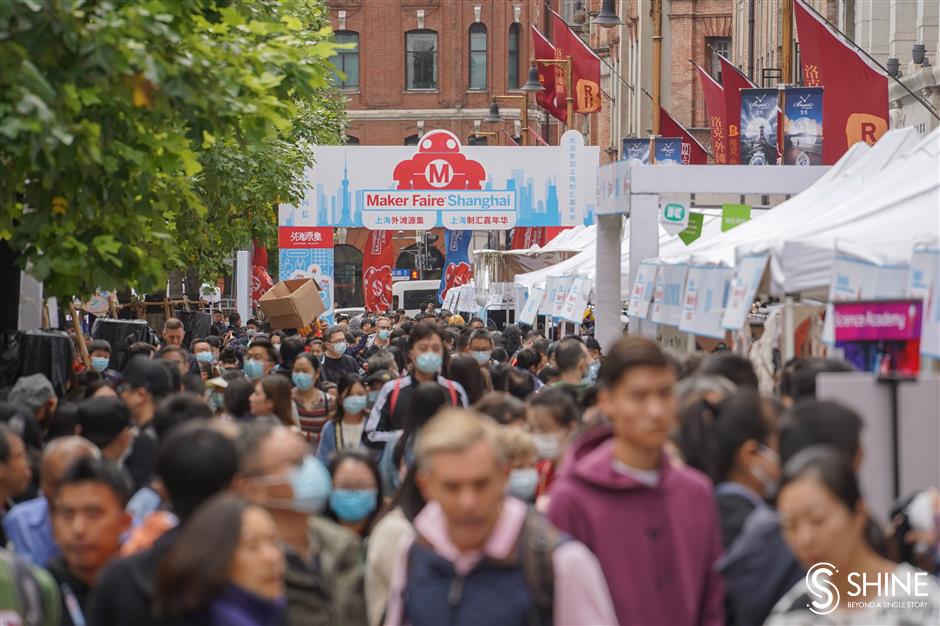