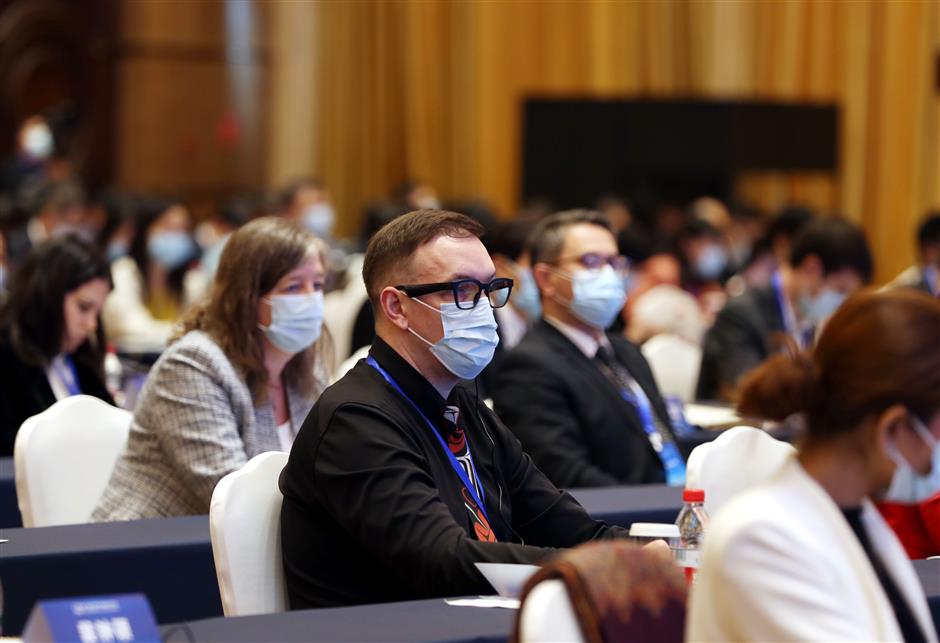 Experts attending the forum listen to a speech in the 9th World Forum on China Studies which opened on Monday in Shanghai.

Nearly 200 scholars from home and abroad participated in the 9th World Forum on China Studies in Shanghai.

The two-day forum is an open, high-level platform that reflects on the latest trends and research findings in contemporary Chinese studies to facilitate exchanges of innovative ideas between China and the rest of the world.

In his keynote speech, Jiang Jianguo, the deputy head of the Publicity Department of the CPC Central Committee, said that only from CPC's one hundred years of glorious struggle and its achievements can one account for the Party's past successes, thus affording important and beneficial insights into the global governance today.

He expressed the hope that scholars, guided by the basic facts about the Party's governance practice, would stay up-to-date about China's progress and contribute positively to the betterment of the world.

Gong Zheng, the deputy secretary of CPC Shanghai Committee and the mayor of Shanghai, said that over the past one hundred years the Party has fundamentally changed China, and the city of Shanghai. He expressed the hope that international academia could, through the important window of Shanghai, get to know and study China better. Gong pledged further efforts to make the city a China studies center with global influence.

Former president of Serbia, Boris Tadić, explained the many-layered connotation of modernization, suggesting that "China is offering a role model to the world that has been stuck for a long time in a trap where the traditional Western meaning of modernization does not respond to contemporary challenges anymore."

He said that, compared to what China is doing today, the term modernization sounds outdated.

"That means that China is, by its example, giving a lecture to the world that is struggling with the consequences of what once was thought as modern and prosperous," the former president said.

In the afternoon session on Monday, the forum announced the winners of the Award for Distinguished Contribution to China Studies. It was followed by the winners' acceptance speeches.