Are you being served for 10 percent extra charge? Eatery eats humble pie

Beef noodles served at the eatery in Laoximen area of Huangpu District. 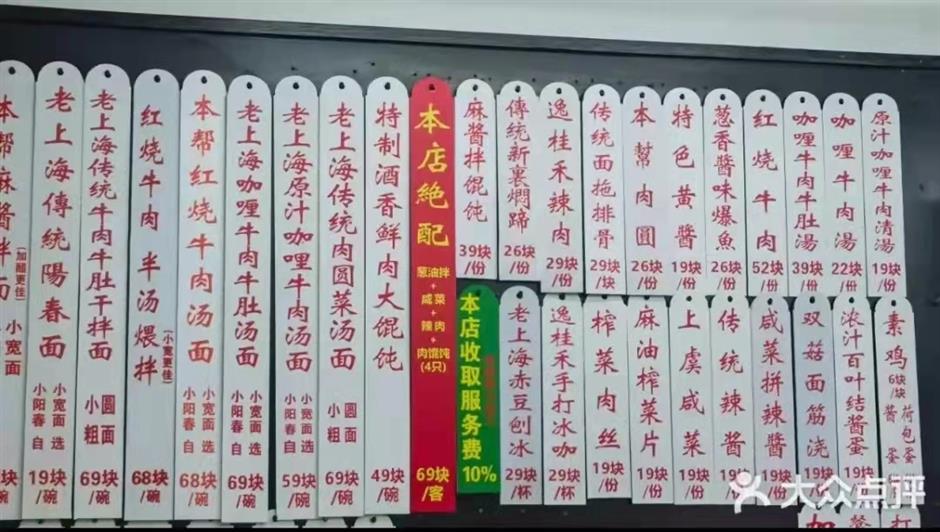 Menu of the eatery with service fee charge marked

A 10 percent tip on noodles? Don't believe it but – until Thursday – that was the case at a noodle eatery in downtown Shanghai, which has triggered a buzz among diners and Netizens.

The eatery in Laoximen area of Huangpu District was known not for its flavorful dishes, but for the 10 percent service fee.

A bowl of noodles without any topping at the restaurant is priced at 19 yuan (US$2.97), plus another 1.9 yuan service charge.

A bowl of dumpling costs 49 yuan, and 53.9 yuan after the service fee is included.

The most expensive noodles with meat balls or beef at the restaurant goes for 69 yuan but came to 75.9 yuan with the mandatory service charge.

The eatery staff said the service fee was based on the service of its owner as he either boiled the noodles or monitored the cooking process.

The restaurant has been open for many years, with the owner even appearing on a TV program as well as the film "My Country, My Parents."

Service fee was removed on Thursday.

"I grew up in Huangpu District, and there are many delicious choices in the area," said netizen Chen Shuangshuang. "But I avoid this one all the time because its charge is beyond my understanding."

"The restaurant owner takes charge of the operation and makes accounts, which are his duty. Are these the reasons for the extra charge? It is really unreasonable," another commented.

Some said the owner was always in a bad temper and the eatery provided no service worth the name.

But the eatery was said to have a booming business with some guests queuing up at meal times.

Pricing regulators with the Shanghai Administration for Market Regulation, the city's market watchdog, said current regulations and laws do not ban such practice, but businesses should make consumers aware of all the extra charges prior to consumption.

On Thursday, the eatery had stopped charging the service fee and removed the board of 10 percent service charge, officials with the administration told Shanghai Daily.

Although the eatery did not violate any regulations, whether its service fee was reasonable is open to question, officials said.