2 test positive for COVID-19 in Shanghai 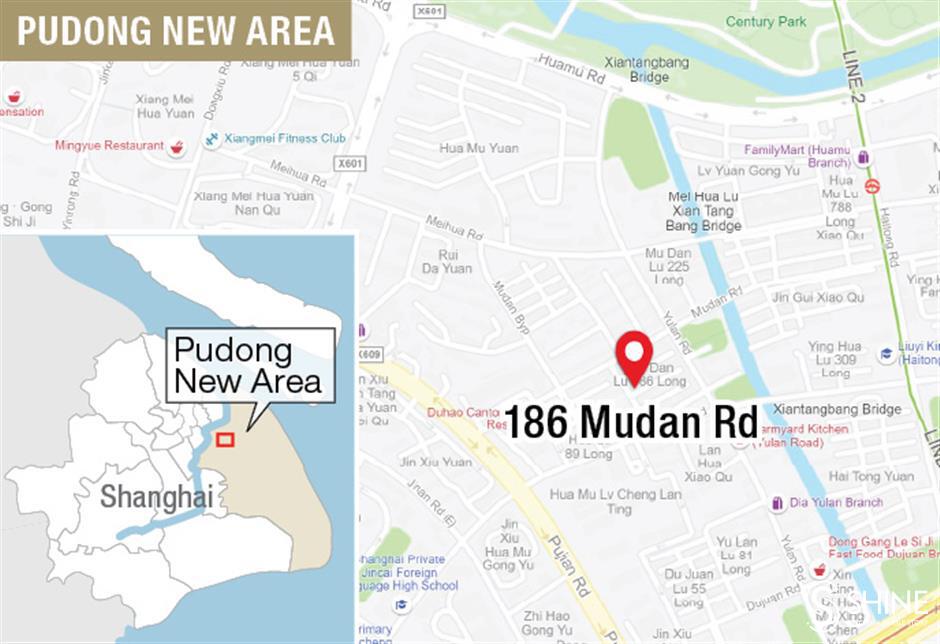 A 74-year-old mother and her 44-year-old daughter were two confirmed locally transmitted COVID-19 cases in Shanghai on Thursday.

They are being treated at the Shanghai Public Health Clinical Center and responding well to the treatment, Wu Jinglei, head of the Shanghai Health Commission, said.

The two arrived in Shanghai on a high-speed train on November 18, and stayed at the residential complex on 186 Mudan Road in the Pudong New Area.

The mother reported feeling unwell on November 27. On November 30, the daughter had a fever, and her mother was feverish the next day. On Wednesday night, they went to the Renji Hospital in Pudong, and in the wee hours of Thursday, were found to be positive.

Both of them had received their two vaccination shots. 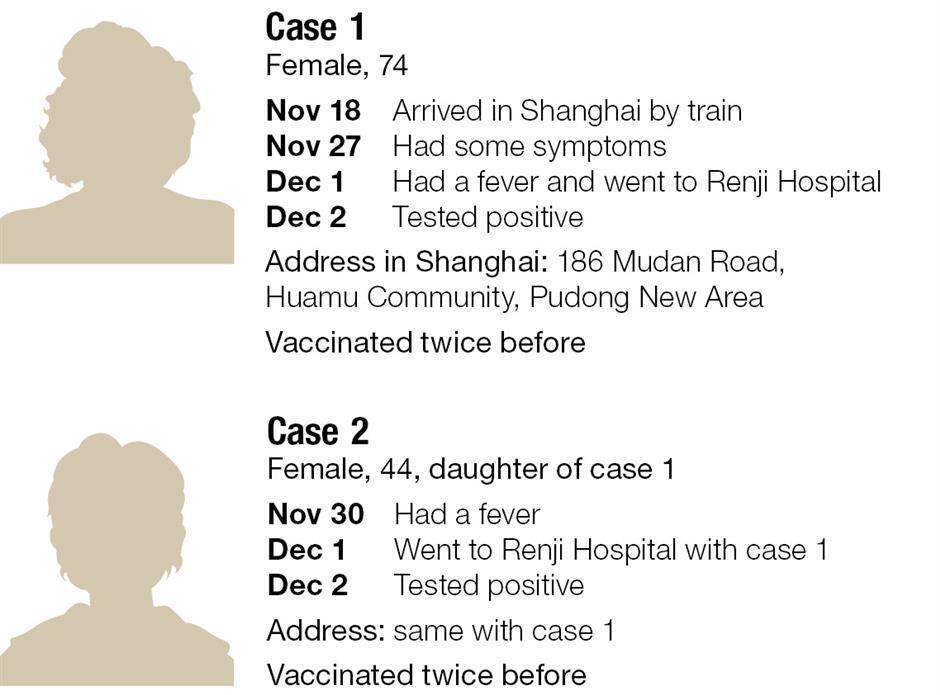 By 5pm on Thursday, authorities had tracked down their 146 close contacts in Shanghai. The nucleic acid tests on 64 of them came back negative. Totally, 14,208 people have been put under medical screening. Of them, 6,351 tested negative.

The residential complex in Pudong is classified as a medium-risk area and is under lockdown.

The complex, along with some roadside stores, had been cordoned off when Shanghai Daily's reporter reached the site at 3pm.

Police officers, security guards, and volunteers in protective outfits were trying to maintain order. Daily supplies such as bottled water and camp beds were sent to the complex. 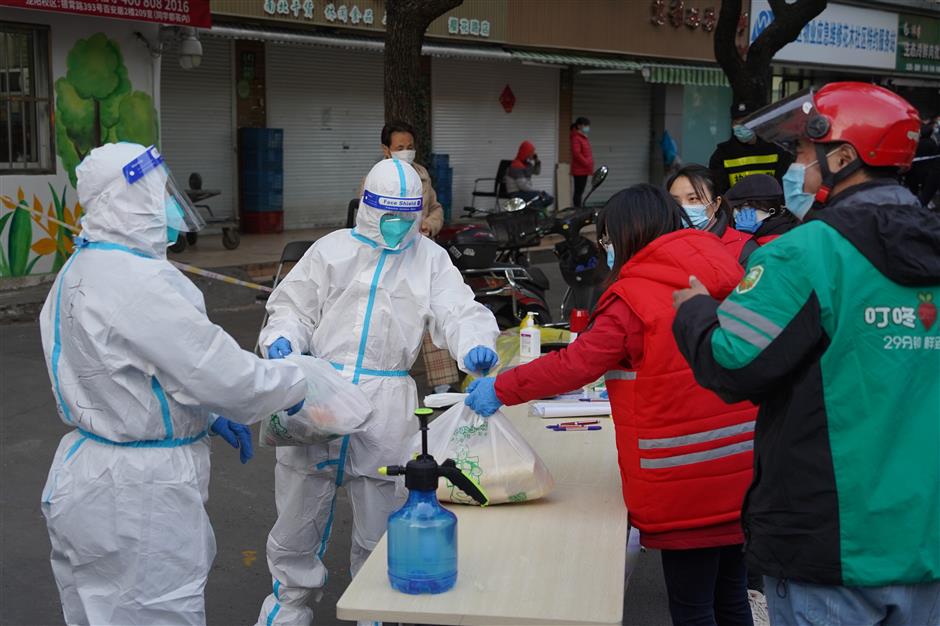 Volunteers make sure daily supplies are sent to residents. 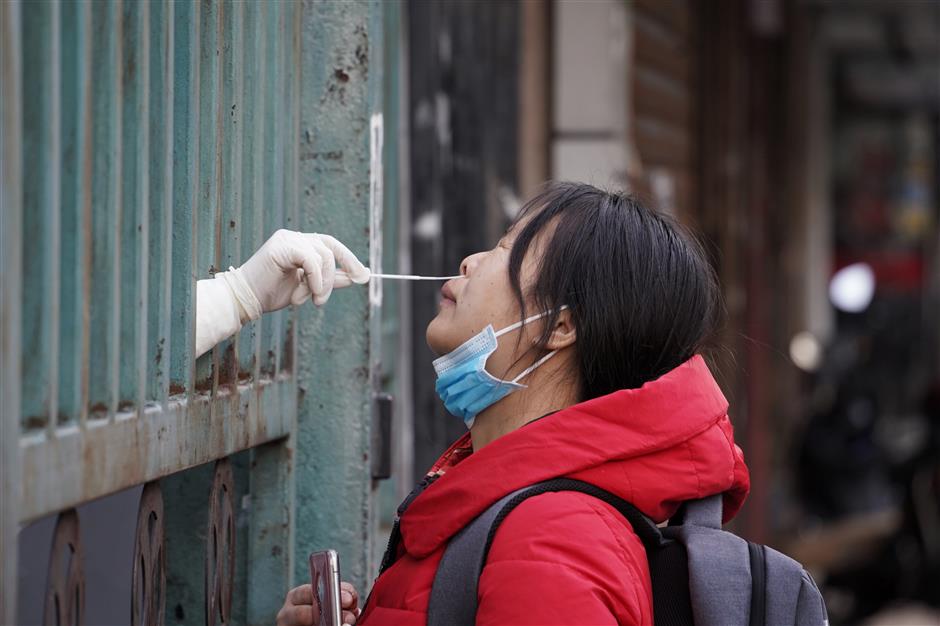 About 900 residents have finished their first sampling of nucleic acid.

Volunteers told Shanghai Daily that local people started receiving nucleic acid tests from the morning. Shop owners in the complex were moved to designated places for central quarantine after the tests.

About 900 residents of the residential complex under lockdown has finished their first sampling of nucleic acid.

Shen Qi, the community police officer serving at the complex, will accompany with the residents and work for them throughout the lockdown.

"I'm a friend of the residents, and they assured me that they will make my job easier by observing the rules," Shen said with a smile.

Over 20 police officers and their assistants of Huamu Police Station are in charge of maintaining order outside the residential complex, Pudong police said. 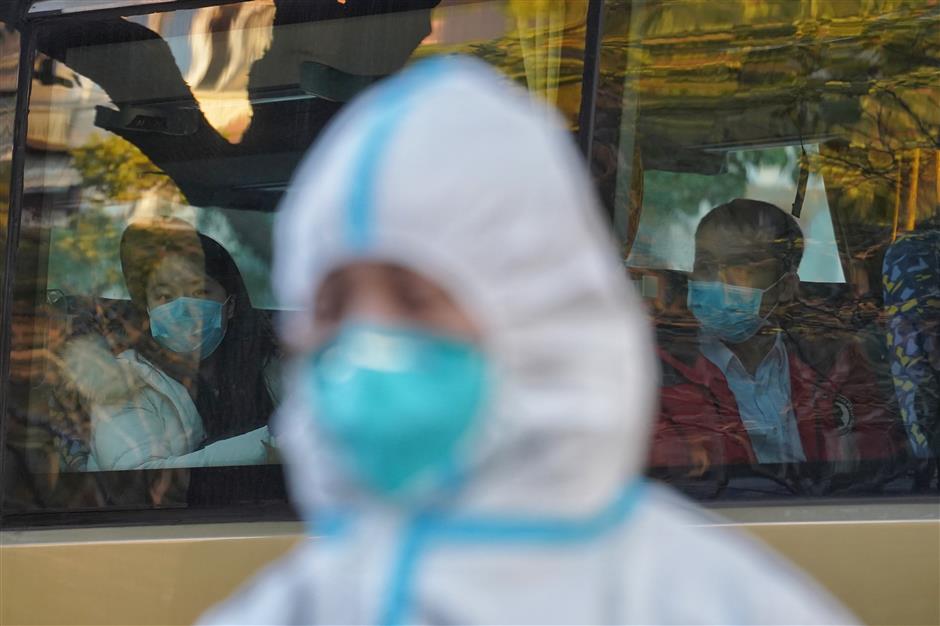 Shop owners in the complex were moved to designated places for central quarantine.

The complex is within one kilometer from the Xiangmei Garden on 1650 Jinxiu Road, which was put under quarantine last Thursday. It is still under a 14-day quarantine, along with Xiangzhangyuan complex on 1080 Haiyang Road in Pudong, and Xijiao Jinlu complex on 189 Yewen Road in Qingpu.

According to Wu, Thursday's two cases were not connected to the previous cases.

The pandemic is still looming over the world. As a major port city and window to the world, Shanghai is under pressure of imported cases. But the city will continue to keep a close eye to ensure the safety and health of people, he said.