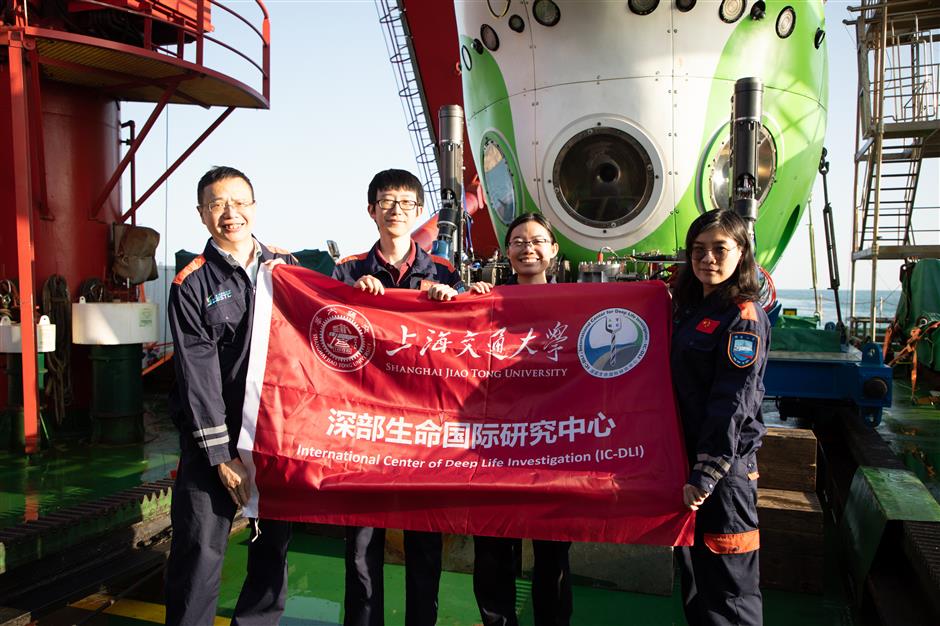 A group of four from Shanghai Jiao Tong University returned to land with China's research ship Tansuo-1 over the weekend after finishing their deep-sea research mission in the western Pacific Ocean.

Tansuo-1 returned to a port in Sanya City, south China's Hainan Province, on Sunday, after completing its deep-ocean expedition to the Mariana Trench.

During the 53-day expedition, which started on October 14, the China-built deep-sea manned submersible Fendouzhe (Striver) successfully completed 23 dives, six of which exceeded a depth of 10,000 meters. 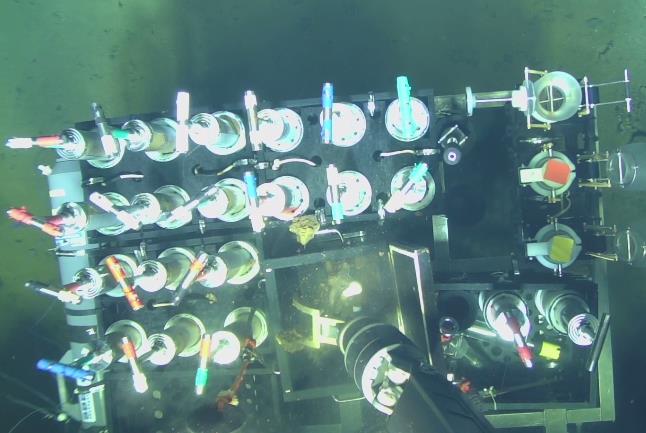 A robotic arm takes sediments from the Mariana Trench.

Among them, the SJTU team, lead by Xiao Xiang, director of the university's International Center for Deep Life Investigation, completed eight dives, including two exceeding the depth of 10,000 meters and three exceeding 9,000 meters, according to the university.

They even descended to the Challenge Deep, the deepest area in the Mariana Trench, going down about 11,000 meters.

Xiao and two other divers also reached an unknown area 8,919 meters deep in the Yap Trench, which has never been visited by human beings.

A sea anemone found in the Mariana Trench

During the expedition, they collected precious samples from more than 200 sites, including water, sediments, rock samples, as well as micro-organisms. They also measured a series of environment parameters, which are precious data for deep-water ecological research.

"At the bottom of the Yap Trench, we discovered macro-organisms such as trepangs, starfish, sea anemones and spongia," said Xiao. "The high density of macro-organism indicates there are plenty of micro-organisms in sediments and water in the area. Though no human has ever reached that area before, we saw influence of human beings, such as rubbish." 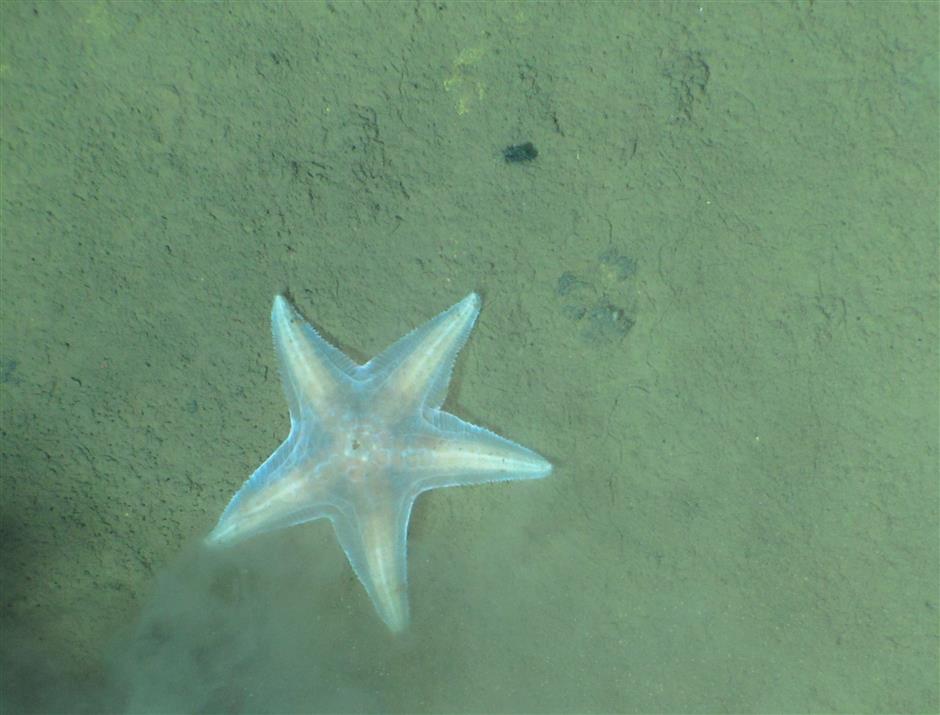 A starfish found in the Mariana Trench

Xiao said they discovered two different kinds of gammarids as well as starfish in the Mariana Trench.

"We found that the densities of macro-organisms, whether large or small, are lower at the depth of over 10,000 meters than in shallower areas," said Xiao. "But life is not forbidden in the 10,000-meter deep area. And the influence of human activities can also been seen at the deepest point in the ocean." 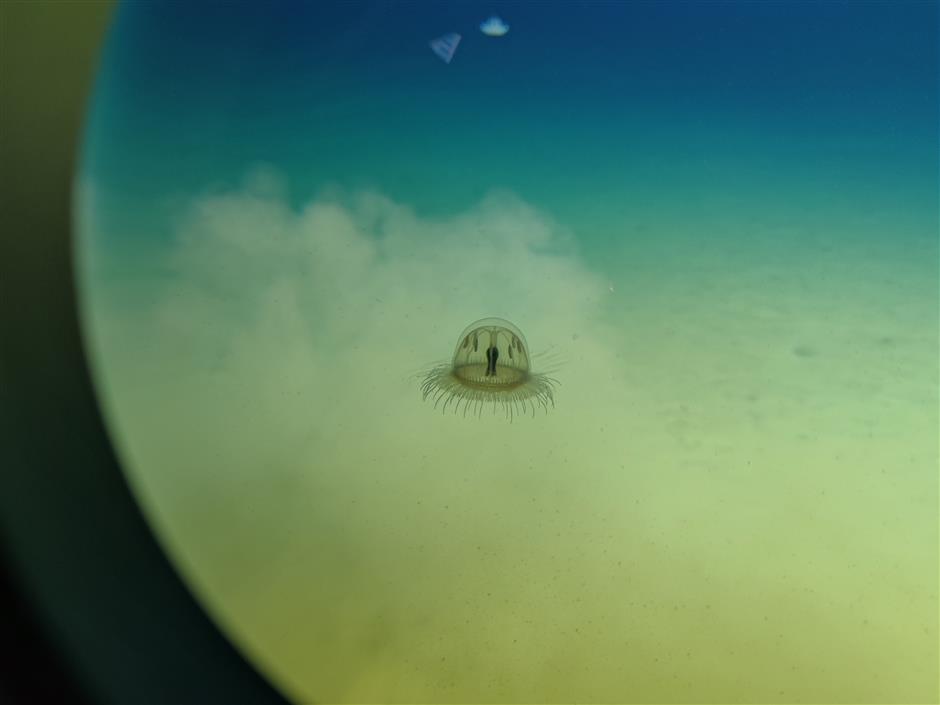 During the expedition, they became accustomed to a life with 13 hours of diving and 24 hours for processing samples afterwards. They had daily meetings lasting between one and a half hours to two hours, with scientists, divers and crew members from different backgrounds sharing their experiences and ideas for better cooperation and analyzing photos and videos taken underwater.

Xiao said his team mainly did research on micro-organisms to answer questions such as biodiversity, life's origins and boundaries, the impact of climate change and pollutant degradation.

The SJTU International Center for Deep Life Investigation was the earliest in China to carry out research on deep-sea micro-organisms. 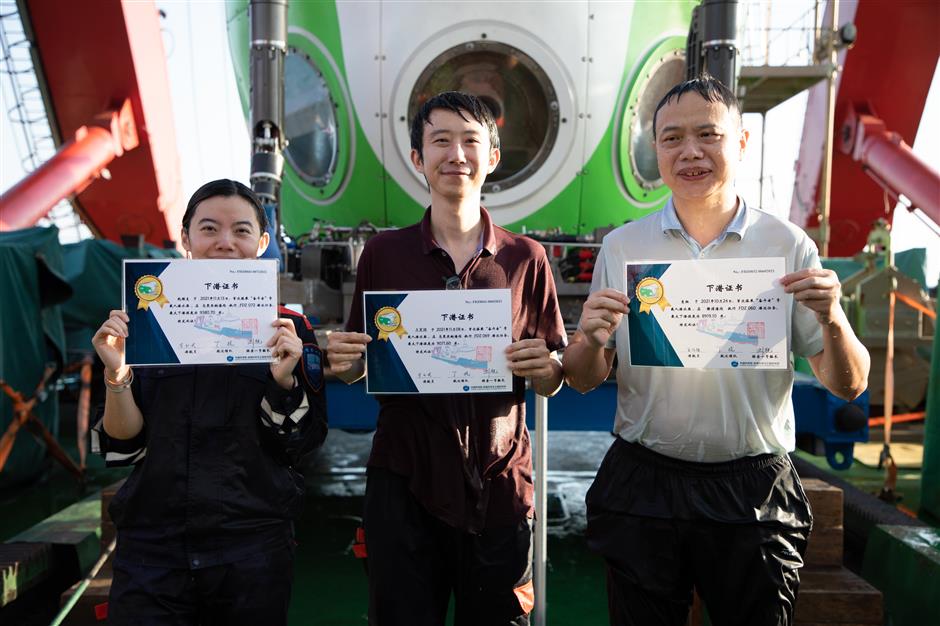 Researchers hold certificates showing the depths to which they descended.

A total of 17 Chinese researchers were on board Tansuo-1 and took part in the expedition.

During the voyage, the research teams jointly launched the Mariana Consensus. The consensus calls for the establishment of a standardized system for deep-sea expeditions to realize the long-term preservation and sharing of deep-ocean scientific samples and data, so as to achieve international cooperation on deep-sea expeditions.

They also launched the Mariana Trench Environment and Ecology Research Project. The project aims to invite more researchers from home and abroad to join in the MEER, so as to tackle major scientific issues together, such as the origins of life and environmental adaptation, biodiversity and climate change, among others.