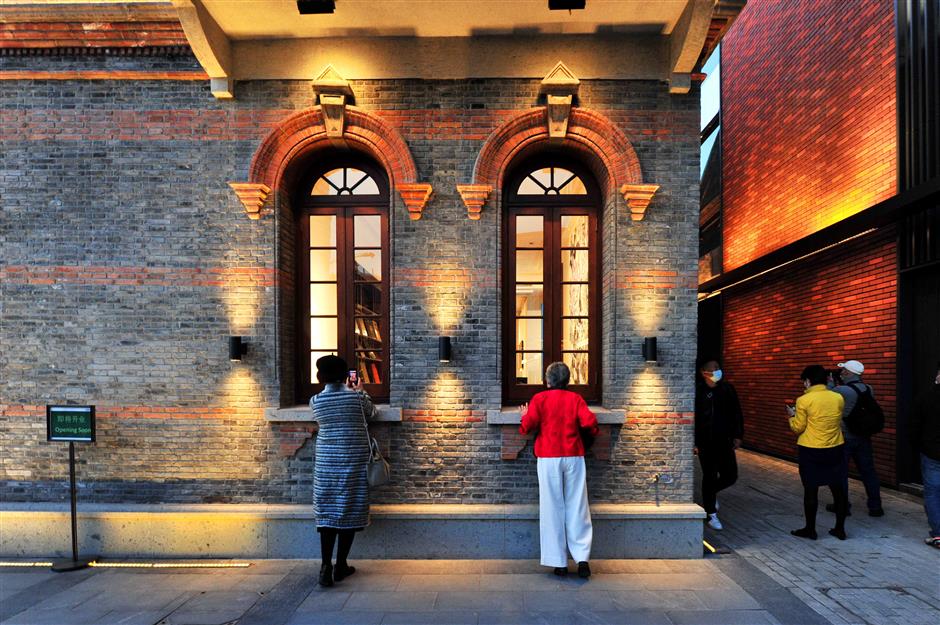 Visitors take photos of the preserved shikumen houses at the INLET.

A new shopping and cultural complex featuring Shanghai's unique shikumen, or stone-gate houses, has opened in Hongkou District to restore the location's historical status as a key cultural landmark of the city.

The INLET at the intersection of Sichuan Road N. and Wujin Road is a complex comprised of eight lanes that connect 60 shikumen houses and eight independent 100-year-old buildings.

After a series of renovations, the complex has retained its historical flavor and has become a new attraction that aims to revive the prosperity of Sichuan Road N., a traditional commercial street once on par with Nanjing Road E. and Huaihai Road.

Residents of the historical neighborhoods were relocated in 2014 and the site was redeveloped beginning in 2018. The preservation of shikumen buildings, a unique example of West-meets-East architecture in Shanghai, makes the project look similar to the landmark Xintiandi area downtown.

The buildlings include Yingchuan Jilu, a century-old luxury private residence, as well as typical shikumen communities Gongyifang and Yihongyuan.

Ren Wei, who is in charge of the redevelopment project, said the Gongyifang lane, where he grew up, was once called Cantonese Lane because many immigrants from south China's Guangdong Province lived there.

Senior carpenters and masons were invited to restore the historical appearance of the houses, which were in poor condition before the renovation project was launched, said Ren.

The numbers and trademarks on red bricks of the houses, for instance, have been retained and allow visitors to touch and feel their profound history, he added.

Traditional artisanship has been involved in restoring the wooden gates, rooftops and ground tiles as well as the bronze pipes.

Yingchuan Jilu, for instance, a highlighted project, was originally owned by the developer of the nearby Gongyifang neighborhood. It features carved stairways, colorful ground tiles and the stone fronts of the shikumen. The same materials and techniques have been utilized to fully restore the original look of the luxury residence, which has been converted into a small art gallery and innovation studio.

Immersive and crossover performances are being presented through December 12 during the In Shanghai Artfest at The INLET as its inaugural event. The performances include varied musical genres such as opera, jazz, traditional Chinese music, contemporary dance, street dance and pingtan, or storytelling to music in Suzhou dialect. 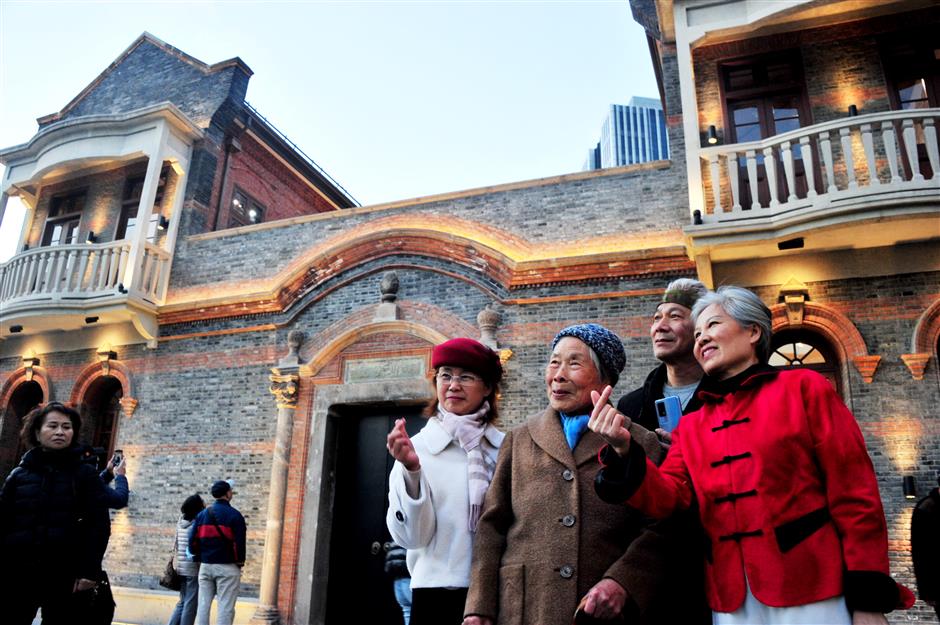 Some former residents pose with the preserved shikumen houses at The INLET.

The open-air stage shortens the distance between performers and audiences, creating an immersive experience.

The event is introduced by the Center for China Shanghai International Arts Festival to encourage the integration of varied art forms and the exchange between traditional and modern cultures while bringing innovative artistic performances to neighborhoods.

Apart from the performances, the area also features two art exhibitions – Urban Adventure, which runs through April 30, and a youth art exhibition, which is presented by the Shanghai Young Art Fair, open through March 31.

Cultural product markets and other artistic activities will be organized in the next few months, according to the Hongkou District government.

The area around The INLET was once the birthplace of Shanghai's culture and art scene. The city's literature, film, publication and modern commerce sectors were prosperous along Sichuan Road N. Famous wordsmiths, such as Lu Xun, known as the forefather of China's modern literature, Ding Ling and Qu Qiubai, an early leader of the Communist Party of China, lived or worked in the area.

Spanish businessman A. Ramos built China's earliest cinema, the Hongkou Theater, on Zhapu Road in 1908, making the site the original location of China's film industry. In its heyday, over 50 cinemas and theaters were operating near the region, accounting for half of the city's total. Walking across the city to watch a movie became a trendy activity among locals.

The city had finished renovating 727,000 square meters of old residential communities in poor condition by the end of October, according to the city's Housing and Urban-Rural Development Commission. Many structures have been preserved to restore the city's traditional ambiance. 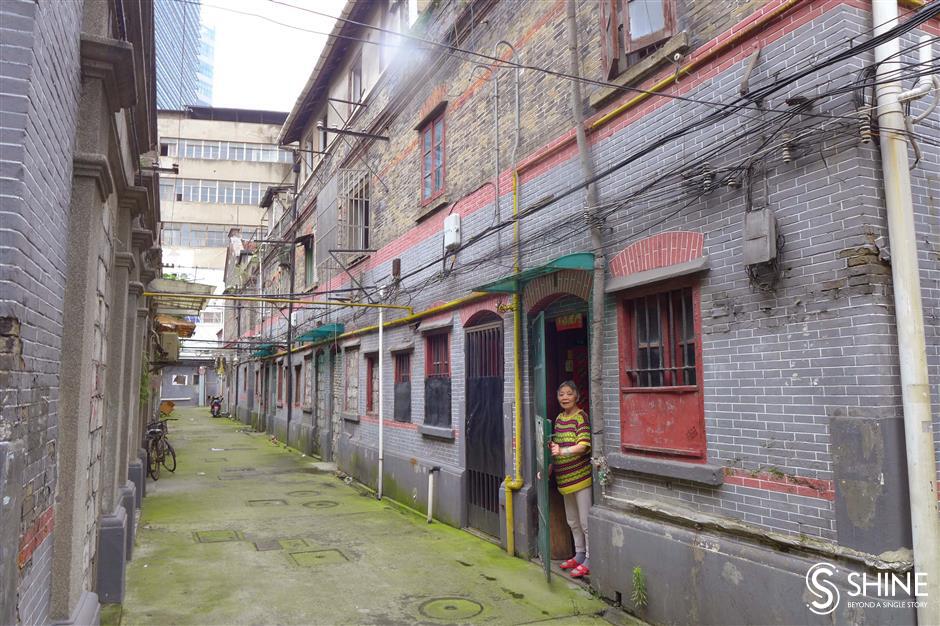 A file photo taken in 2015 of the Gongyifang neighborhood before renovation.

According to the plan, all large-scale dilapidated residential houses downtown will be renovated, or their residents relocated, by 2022.

Among the protected categories of buildings, shikumen have become one of the most valuable because they are considered unique to the city.

The style combines Western architecture and China's traditional courtyard structures. The houses were first built in the 1850s by Europeans living in foreign concession districts.

In their heyday, there were more than 9,000 shikumen lanes with 200,000 buildings across the city. Only 1,900 lanes and about 50,000 buildings remain, according to the Shanghai Committee of the Chinese People's Political Consultative Conference, the city's top political advisory body.

About 2 million residents still live in shikumen, which once housed about 80 percent of Shanghai's population.

Tianzifang on Taikang Road is another area once held up as an ideal model. There, residences on ground floors are rented to art galleries and fashion shops. The residents remain living upstairs. 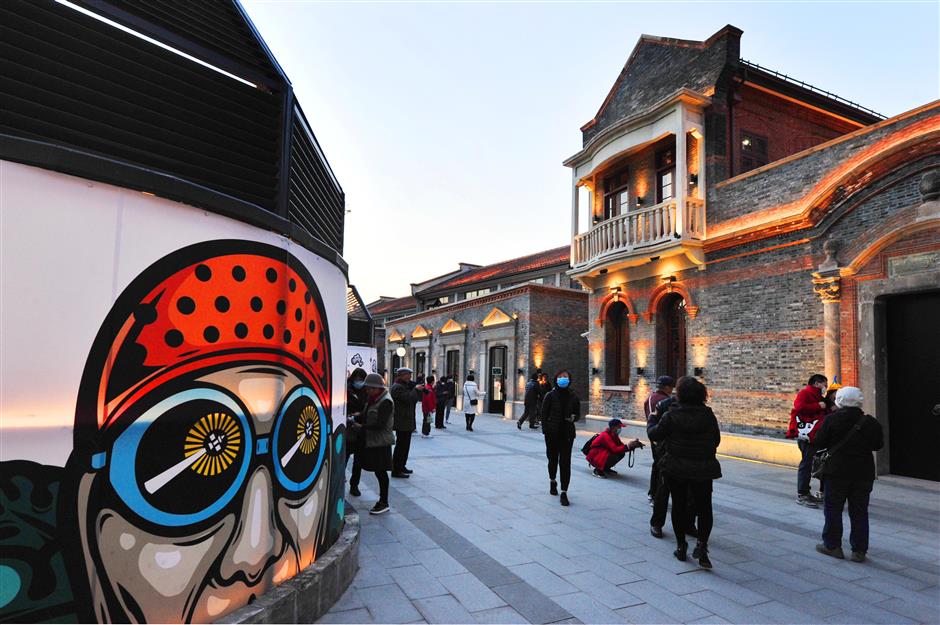 A number of visitors and former residents visit the INLET, which was renovated from typical shikumen houses.

In the Cite Bourgogne community on Shaanxi Road S., all the historic buildings were kept and renovated.

The INLET has combined the experience of typical projects and become a demonstration on how the city government is preserving its architecture as well as history and culture, according to the district government.

The INLET will drive the new upgrade and development of Sichuan Road N. while influencing the riverside regions along the Huangpu River and Suzhou Creek in Hongkou.

Walking across the Huangpu River to Hongkou to watch a cultural performance is expected to become a popular trend among locals again, the government said.