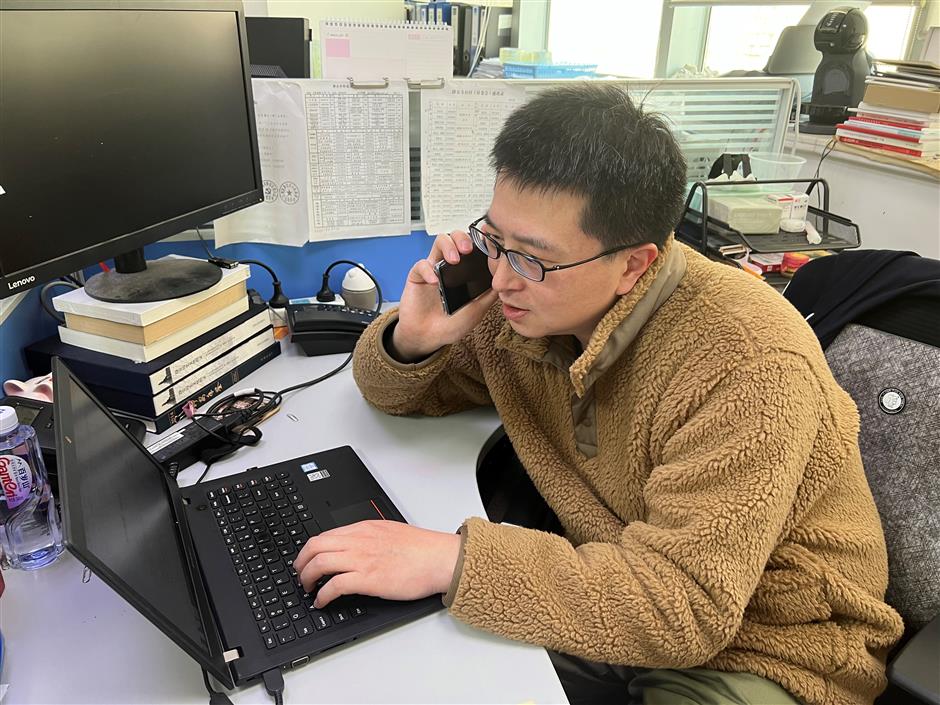 Jiang Taiping, office director of the Jing'ansi Subdistrict, has slept in his office for the five nights since Shanghai reported an imported asymptomatic COVID-19 case on January 11.

The case, a Chinese studying in the United States, has so far led to two locally transmitted COVID-19 cases and six asymptomatic cases. All were caused by the highly-infectious Omicron variant.

A milk tea store under the jurisdiction of the subdistrict has been listed the city's only medium-level risk area.

To track all the close and secondary contacts of the new cases, Jiang has slept only 10 hours in the last five days. He keeps working at his post to prevent a community transmission of the Omicron variant.

"The number of contacts for epidemiological survey has decreased nowadays, a good sign for an end of the outbreak," said Jiang, 42, who has been working at the subdistrict for 18 years.

He serves as the leader of the subdistrict's epidemiological survey team as well as takes charge of the supplies and logistic support.

He has to make and answer more than 100 phone calls every day. After finishing routine office works in the daytime, he began calling the contacts one after another on an epidemiological survey list, released by the city's disease control and prevention authority often after midnight.

He and colleagues often had to work overnight to call the numbers to screen out the close or secondary contacts and risky groups.

"Sometimes, I had to dial a single number for over 20 times to wake up a contact at midnight and explain what happened," Jiang said.

He helped the contacts to recall their movements in recent days and persuaded them to attend a central quarantine. He then dispatched a specialized transmission vehicle to pick them up.

Such procedures will have to be repeated for over 30 times every night, Jiang said.

Wang Jing, Party secretary of the Huashan community neighborhood committee of the subdistrict, also has an extreme busy schedule nowadays.

The community on the junction of downtown Jing'an, Changning and Xuhui districts has some 1,700 households of residents, mostly living in old residential buildings. They are several blocks away from the medium-level risk area near the landmark Jing'an Temple.

In China, all urban communities have neighborhood committees that serve as the grassroots arm of authority and act as gatekeepers over how the neighborhoods function. They've been playing a dominant role in enforcing health and safety rules during the coronavirus outbreak.

During the current COVID-19 outbreak, Wang and other seven community workers at the neighborhood committee have to work over 12 hours every day.

They make phone calls to the close contacts of the confirmed cases. If nobody answers, Wang and colleagues visit the residents and check their movements. For some residents who had moved elsewhere, Wang had to call their neighbors or relatives to check their condition.

Multiple residential buildings in the community were quarantined for screening. Wang put on a hazmat suit and accompanied the medical workers to conduct nucleic acid testing door to door.

"Most residents are familiar with my voice," Wang said. "We can make them feel more relaxed."

During the quarantine, Wang also had to arrange makeshift accommodation for some deliverymen and babysitters. She persuaded some residents to accommodate their nannies for several nights, or arranged a tent with heater and thick quilt for the deliverymen.

Most residents are greatly cooperative, Wang said. Many even joined the volunteer team to assist the community workers.

"With the joint efforts of the community workers and residents, I believe we can get through the difficult period soon," said Wang.

Wang Jing checks the health status registration form of the residents under her jurisdiction.