Nightingale nurse ready to save lives, fight against COVID-19 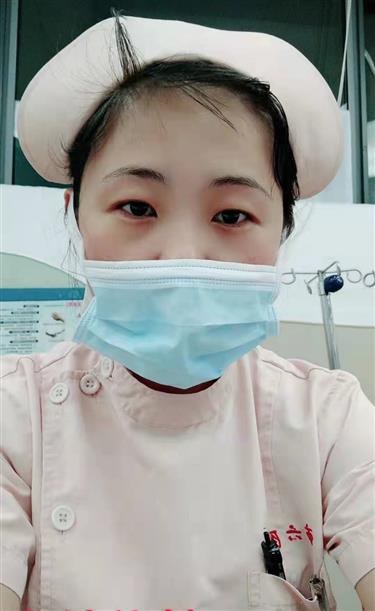 Li Qian, an emergency department nurse at Shanghai 6th People's Hospital, can tell clearly where each patient comes from and where they've been.

Apart from the busy work in the emergency room, she has taken charge of the epidemiological investigation among patients during the COVID-19 pandemic.

The hospital in Shanghai's downtown Xuhui District receives a large number of patients from across the country every day, but Li never felt her job was tedious and complicated.

"I told the patients their cooperation is key to the final success of China's fight against the pandemic," Li said.

Most patients are then cooperative and offer the required information.

The 30-year-old native of China's east Shandong Province joined the emergency department of the hospital in 2019. After the coronavirus outbreak in central China's Wuhan city, she applied to take part in the medical team to the then epicenter of the epidemic.

She was refused as a newcomer with little experience, but was dispatched to the busiest emergency department to fulfil her desire to save lives and contribute to the fight against COVID-19.

She interviewed each patient carefully about their origins and tracks.

"I must work hard and carefully to help maintain the achievements of China during the fight against the COVID-19," Li said.

In August 2021, the hospital was quarantined for two days for screening of COVID-19 cases. Li worked continuously to call back colleagues at home, appease the stranded patients and take care of her patients.

"I only took several short naps in the two days," she recalled.

Li contributes even after work. She conducted CPR (cardio-pulmonary resuscitation) for 20 minutes on a man who fell unconscious on street on Friday.

After picking up her 4-year-old daughter from school, Li found the fainted man at the underground tunnel near the Shanghai South Railway Station.

After checking his condition, Li began conducting CPR for him. She asked pedestrians to take care of her daughter and called the ambulance.

Despite the risk during the pandemic, Li conducted artificial respiration.

"It was my instinct to rescue the man without considering my own safety," Li said.

The man died after being sent to the nearby Dahua Hospital, but Li's act of kindness was filmed by a pedestrian and posted on the Internet. It has been widely lauded by netizens.

Li is a member of a nursing team for Shanghai's public health emergency. The hospital established a training base for the team in 2021, and 330 nurses like Li have been trained with first-aid rescue skills for any emergency situation.

Li said she had rescued about five patients outside the hospital. Whenever a patient calls for help, no matter on the street or on public transport, Li said she would offer help without hesitation.