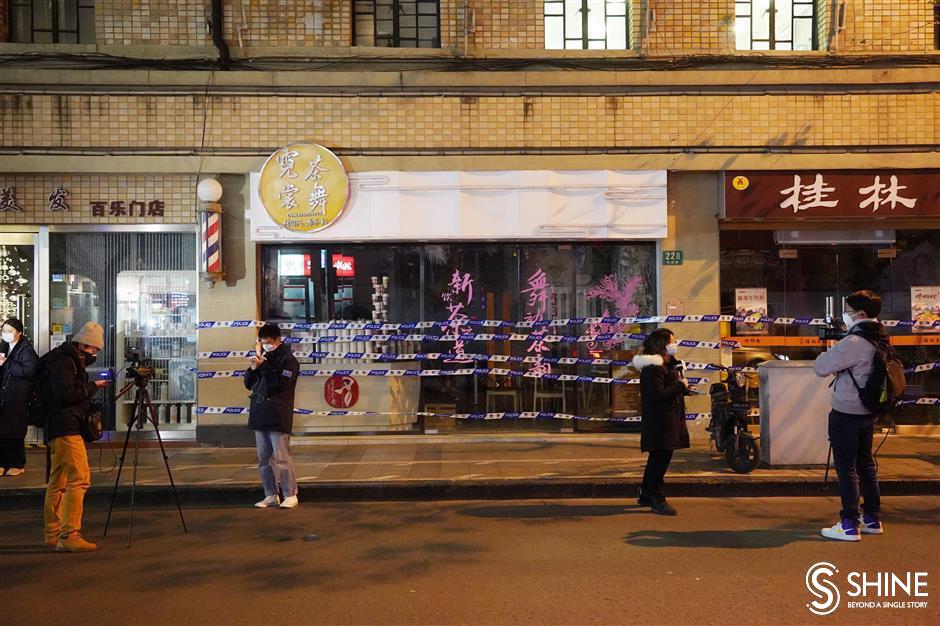 The lockdown at 228 Yuyuan Road, a milk tea store in downtown Jing'an District, will be lifted at midnight.

Shanghai will downgrade one of its medium-risk areas for COVID-19 to low-risk from Thursday after a resurgence of the pandemic was brought under control.

The lockdown at 228 Yuyuan Road, a milk tea store in downtown Jing'an District, will be lifted at midnight.

After the downgrade, the city will have one remaining pandemic medium-risk area – at the Group 8 area of Xingfu Village, Fengcheng Town, in suburban Fengxian District, according to the city's COVID-19 prevention and control authority.

The milk tea store called "China Fresh Tea" was listed as a medium-risk area on January 15 after two COVID-19 cases, who work at the store, and three asymptomatic cases were confirmed.

The genetic sequencing has confirmed the new cases were infected with the Omicron variant, which is more transmissible than the previously dominant Delta variant, according to the National Health Commission.

The only remaining medium-risk area in Fengxian is the accommodation of another locally transmitted COVID-19 case that was reported on Monday.

The 29-year-old man is a staffer handling import business at the cargo area of the Pudong International Airport. Some 20,000 people related to the man have tested negative.

The Shanghai Airport Authority said it had tightened the "closed-loop" management on human, cargo and environment at Pudong airport, which is operating normally in the throes of the nation's Spring Festival travel rush.

Amid a new wave in the global pandemic caused by the Omicron variant, Shanghai has reported a surging number of imported cases via Pudong airport.

A suspension on four flights to Shanghai, operated by Swiss Air and Aeroflot as well as Shanghai-based Juneyao and China Eastern airlines, has been prolonged by another two to four weeks to curb imported COVID-19 cases.

About 30 passengers on these flights have tested positive at Pudong airport since mid-January, the Civil Aviation Administration of China said on Wednesday.

Among the most severely affected, Aeroflot-Russian Airlines' Flight SU208 from Moscow to Shanghai will be suspended for another four weeks through early April.

Other flights, such as China Eastern's MU570 from Paris to Shanghai and Swiss Air's Flight LX188 from Zurich to Shanghai, will be suspended for another two weeks beginning early March.