From restaurants to farmers, food sector swings back into action 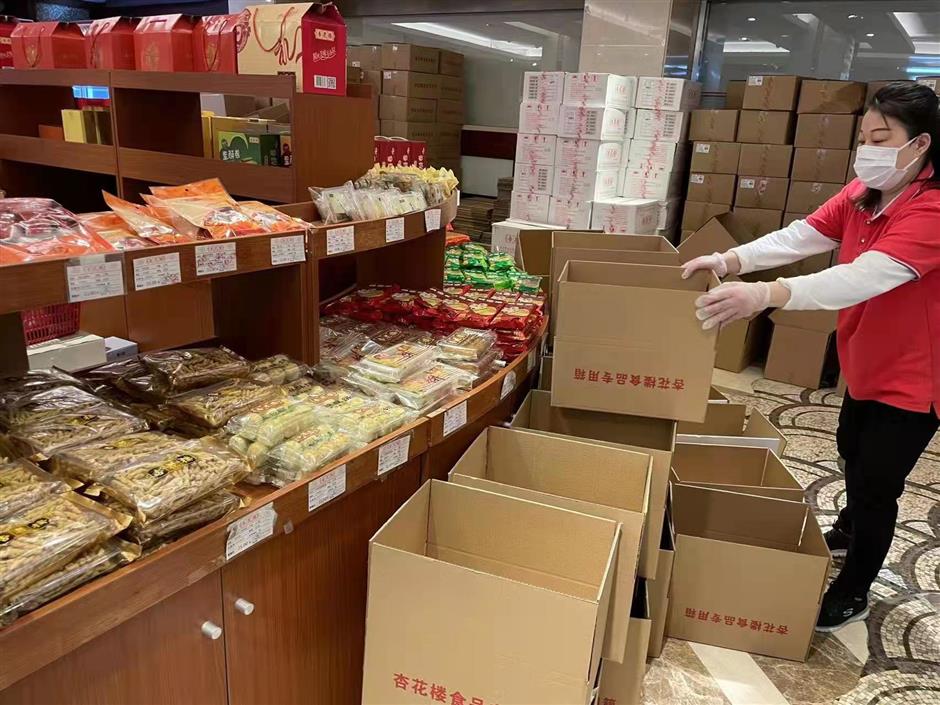 A staffer arranges shelves at a Xing Hua Lou outlet.

Spring is a vibrant season and the activity vibes missing for a long time in the city due to the pandemic resurgence are gradually returning.

In the catering industry, time-honored restaurants are busily resuming operations. 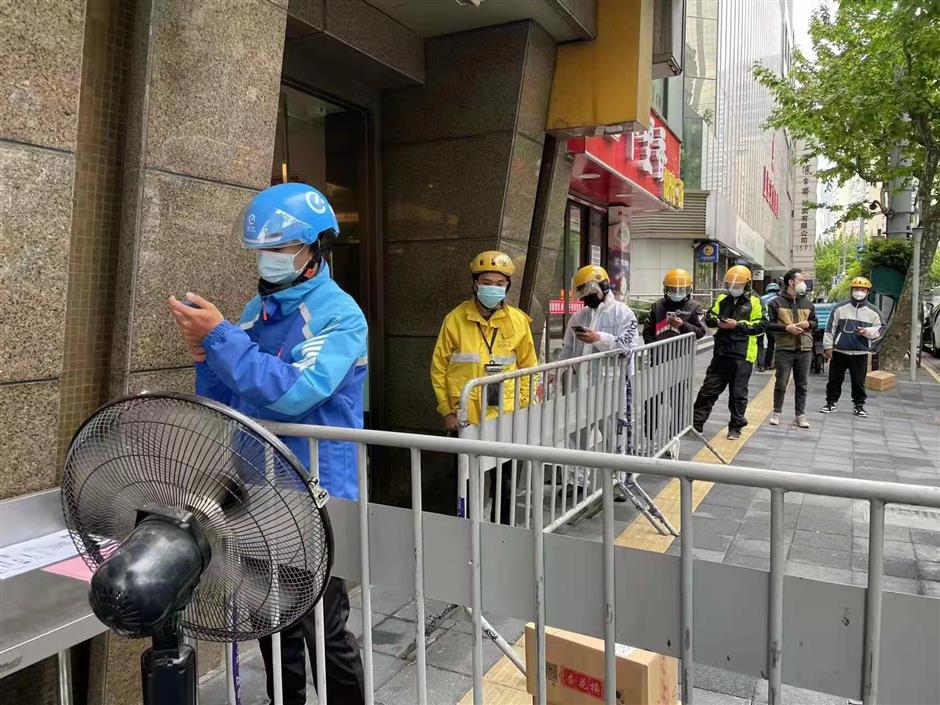 Delivery workers observe distancing rules as they queue outside Xing Hua Lou to pick up orders.

Fuzhou Road in Huangpu District is still quite tranquil, but it's another matter at Xing Hua Lou Restaurant, the oldest Cantonese-style eatery in the city.

Workers are busy unloading goods and stacking shelves and the restaurant has resumed food delivery services via the city's two online delivery platforms, Ele.me and Meituan.

Food products are back in store and can be ordered by individuals now instead of through group buying. Five packages containing some 20 food types were launched on Thursday. 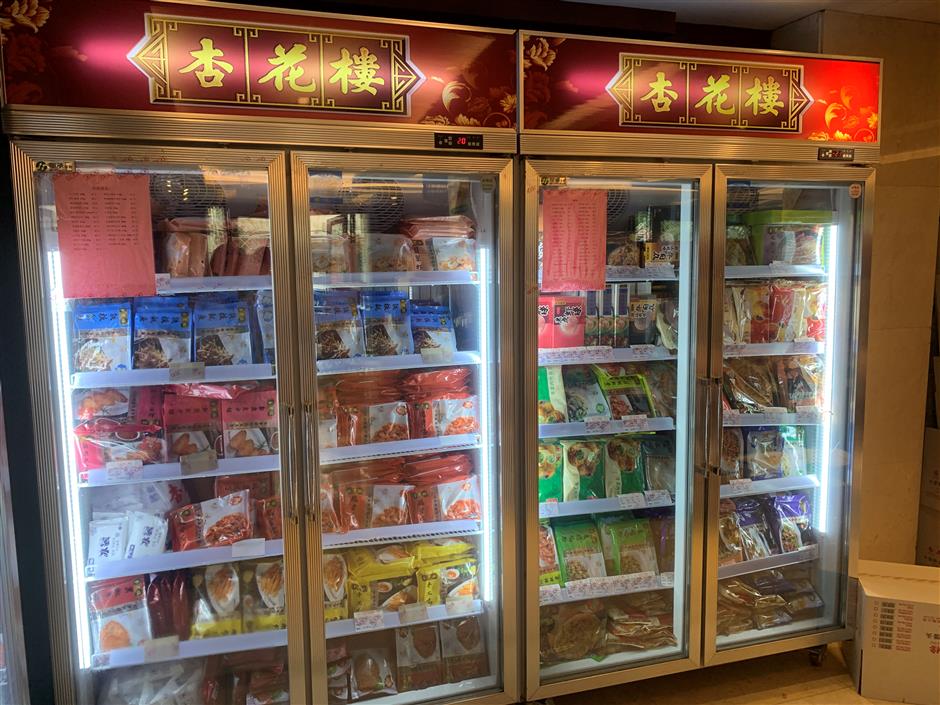 Refrigerators are packed with food at Xing Hua Lou.

These include pre-cooked dishes, steamed buns, pastries, delicatessen items, and even zongzi (wrapped, steamed glutinous rice dumplings with different fillings), a traditional food of the Dragon Boat Festival that falls on June 3 this year.

"All food packages are delivered inside boxes to prevent contamination during delivery, and delivery workers need to show their negative nucleic acid test result to pick up goods," said Chen Jie, head of the restaurant. 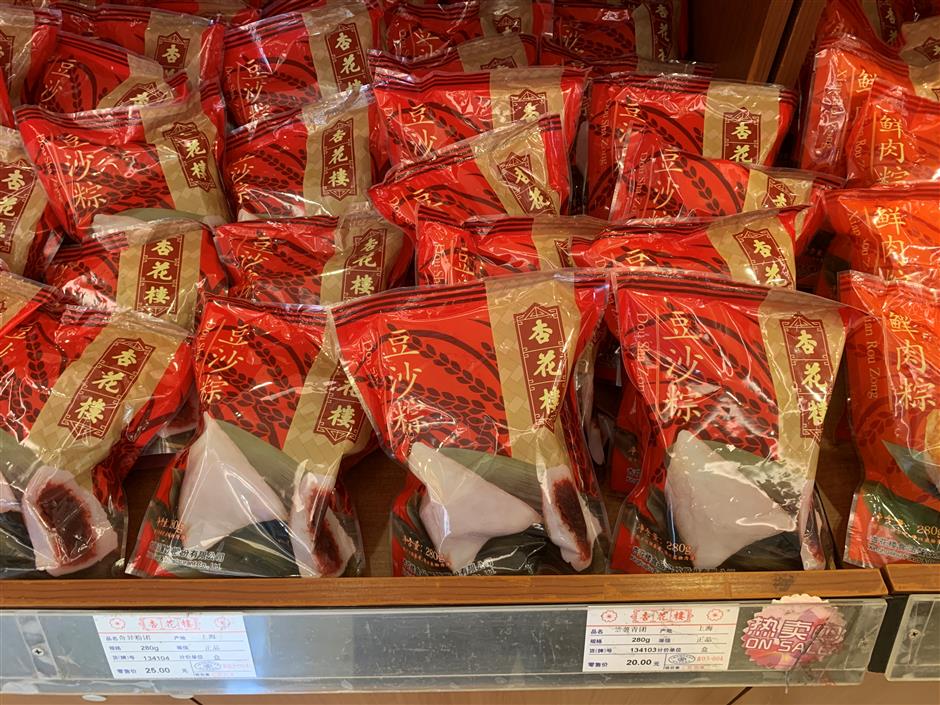 Zongzi is back on the shelves at Xing Hua Lou.

Within two hours on Thursday, the restaurant had received more than 300 orders. It has 128 outlets across the city, and they will resume operation gradually.

"Some stores are now doing disinfection preparation, and every day we have three to four reopening," said Chen. 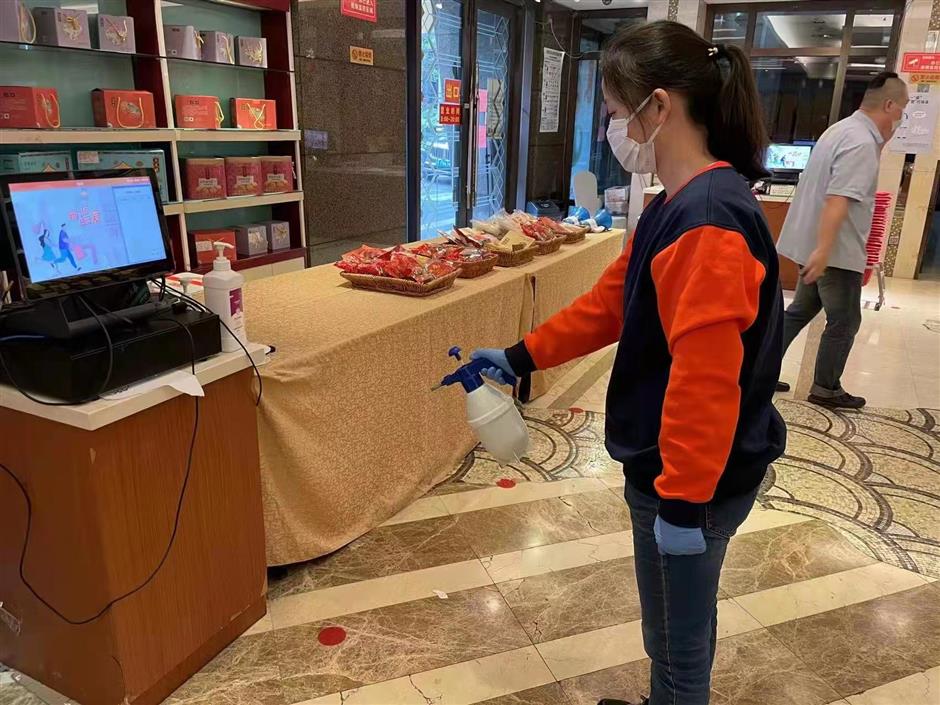 A staffer ensures disinfection is paramount at Xing Hua Lou.

At the company's processing plant in Minhang District, 240 workers are under closed-loop management as they toil 12 to 15 hours a day to ensure supply.

Production capacity has surpassed that from before the pandemic, hitting 6,000 boxes of steamed buns daily compared with 2,000 on average previously as output increases of the buns, one of the company's most popular products.

Some other time-honored food stores in the city such as Shen Da Cheng, Sunya Cantonese Restaurant, and Dexing Restaurant have also resumed operation. 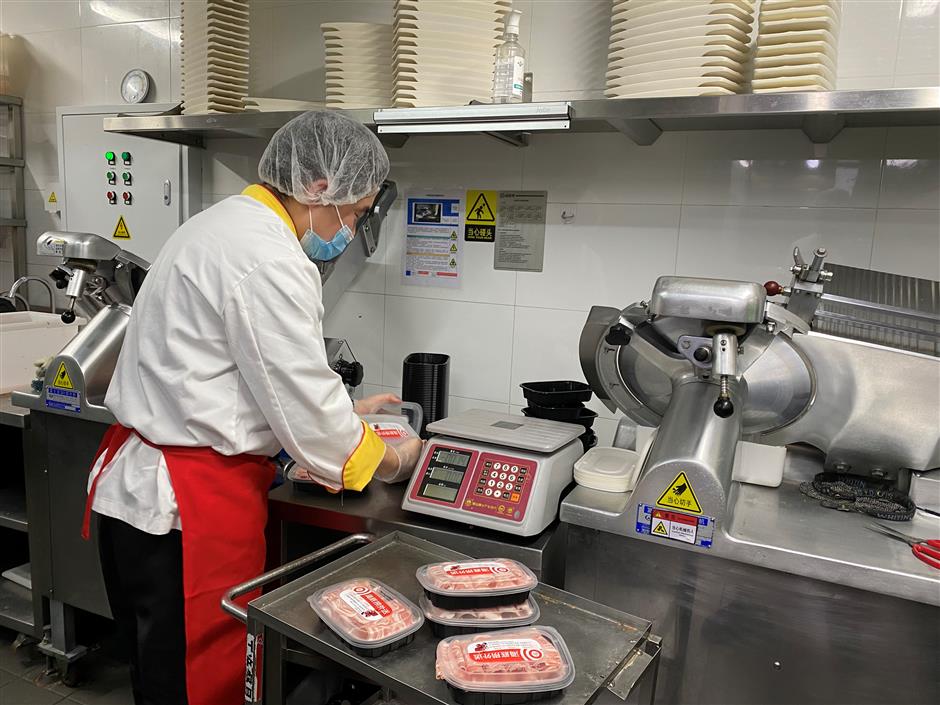 A staffer prepares hotpot food materials at an outlet of Haidilao.

The familiar and pleasing flavor of hotpot is also back in production.

Haidilao, China's biggest chain of hotpot restaurants, resumed online business through its 26 restaurants and 15 delivery stations in Shanghai on Thursday.

The catering options are slightly fewer, but the prices almost remain the same. 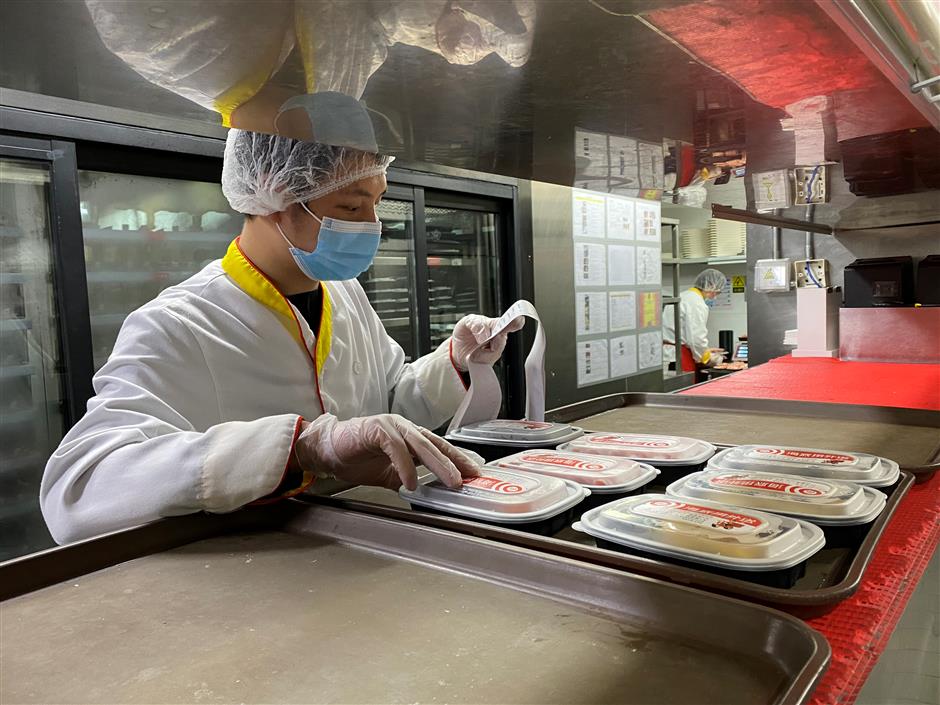 A worker checks the order list and prepares hotpot packs at an outlet of Haidilao.

Liu Xianhao, head of the Beijing Rd W. outlet of the restaurant chain in Jing'an District, is managing long-distance as he is still under lockdown.

"Some old staffers have returned to their posts and operations are smooth as we have been working together for a long time," Liu said.

With more and more workers returning, the restaurant has expanded its delivery area range to 3 kilometers from 500 meters. 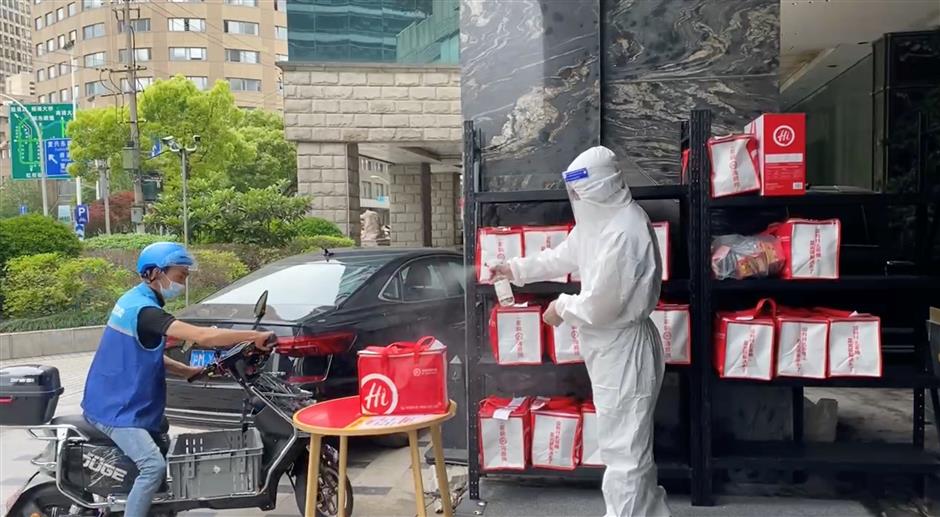 A staffer ensures disinfection protocols are observed outside an outlet of Haidilao.

"We have noticed that individualized catering options are welcomed by residents, compared with group buying which only includes set meals," said Liu.

The number of orders keeps growing steadily and has hit nearly 300.

The outlet has 17 workers back on the job so far so its maximum daily capacity is 300 orders.

More workers are expected to join the team after their lockdown status is lifted.

"All workers at the restaurant are put under closed-loop management and they eat and sleep on site," said Liu. "Also, they need to take two antigen tests a day and one nucleic acid test every two days." 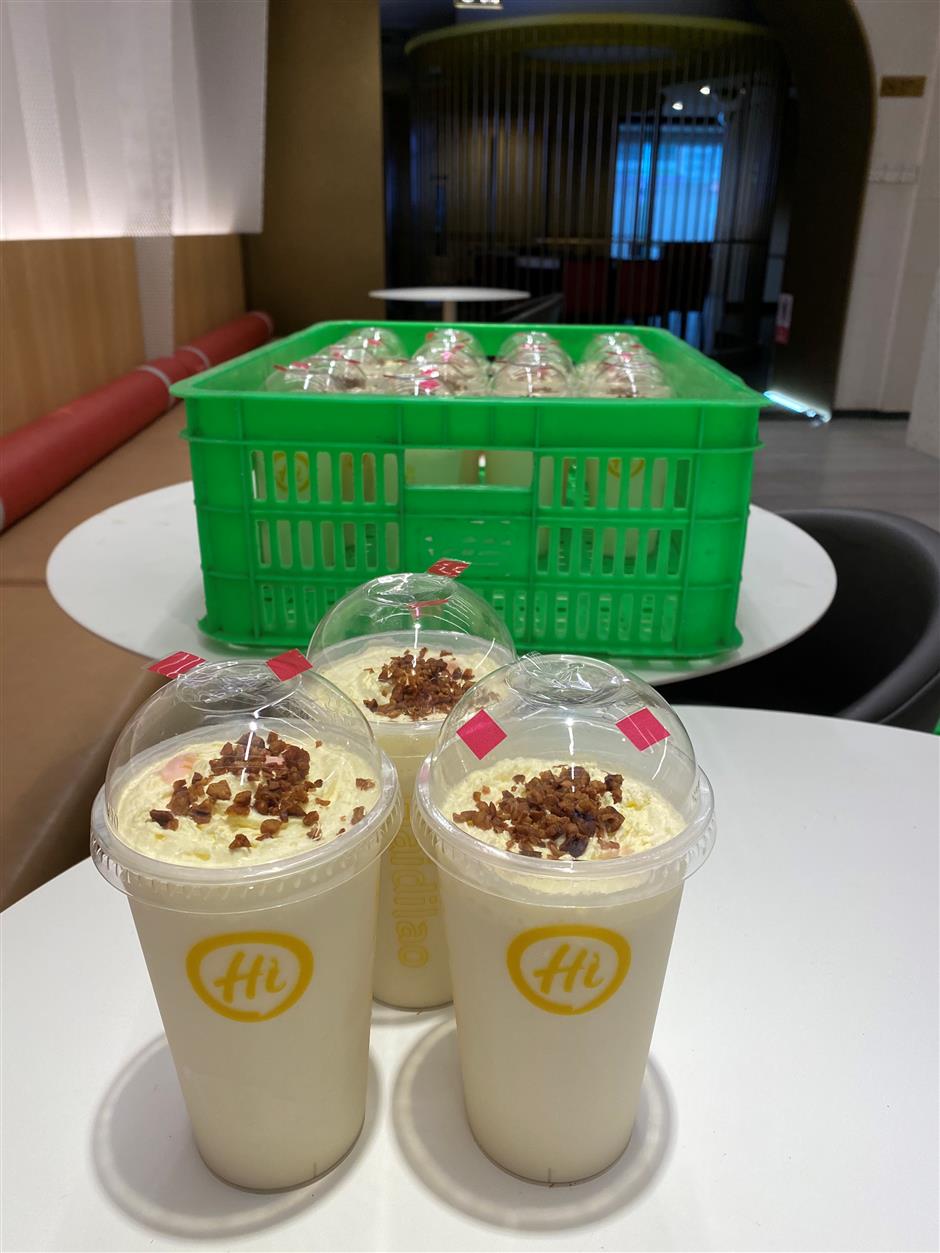 Milk tea is back in production.

Liu was actively asking for feedback from "diners."

"Even in this special period, we want to ensure consumers are satisfied, and we have just put milk tea on the delivery menu," he said.

The hotpot chain said the list of outlets it opens will be adjusted based on COVID-19 prevention requirements. 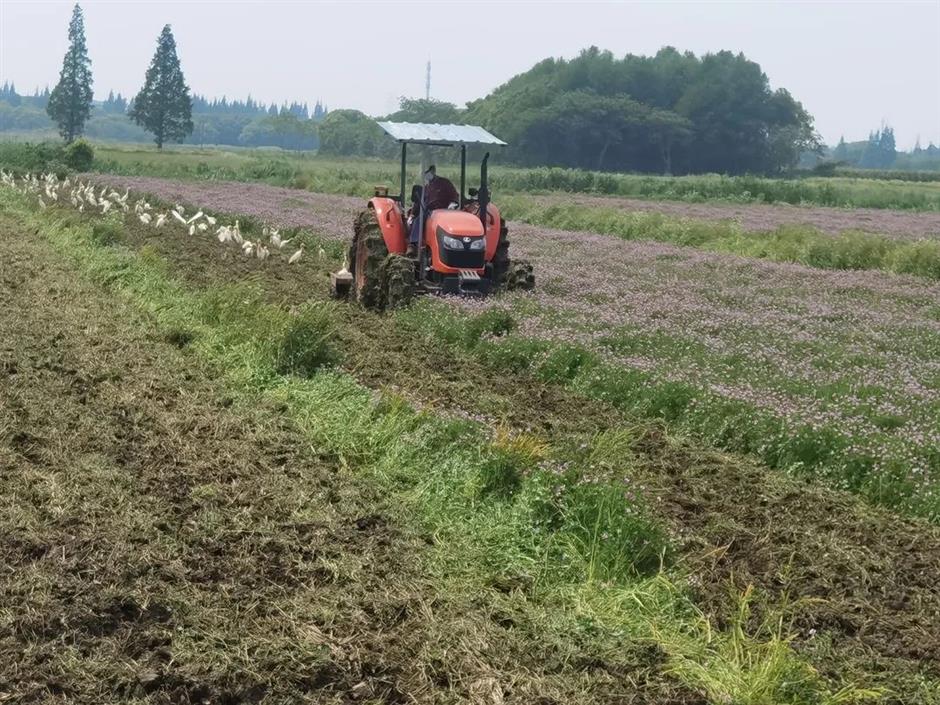 Activity is also gearing up in agricultural areas.

Tractors are ploughing the fields, and rice seedlings will be transplanted in mid-May.

"Those returning to farm work must come from precautionary areas, and they need negative nucleic acid test results taken within 48 hours," said Zhang.

"They will receive a temporary work permit after we review their test materials," he added.

"During their farm work, we will check their pandemic prevention practice, such as whether they wear the mask properly, and they will be ordered to rectify immediately if problems are found." 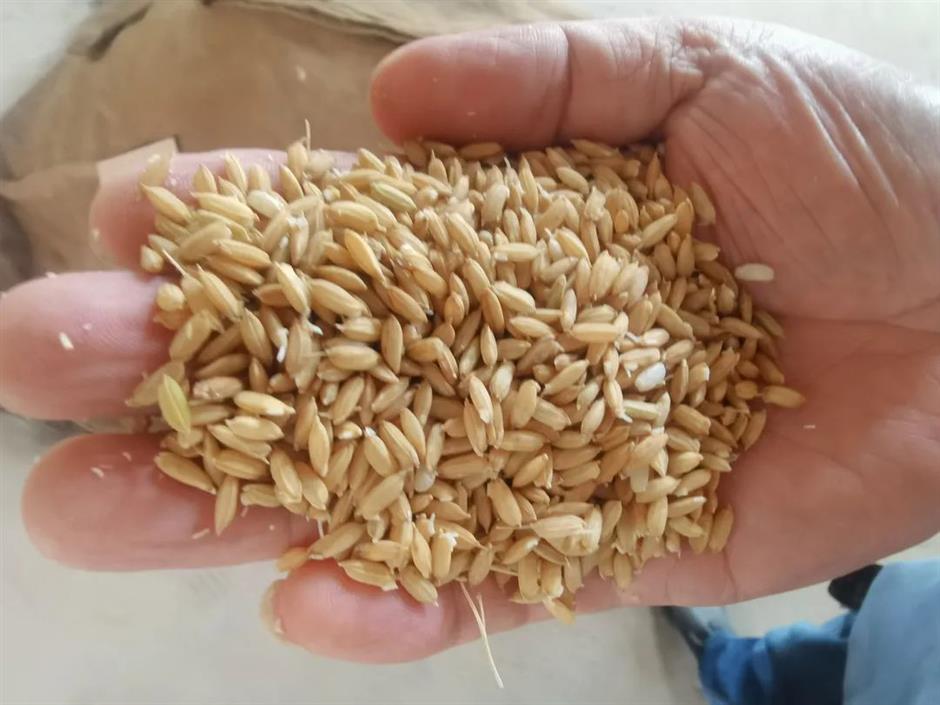 The time for rice to hit the market is estimated to be no later than previous years.

The time for rice to hit the market is estimated to be no later than previous years, according to Qiu Haigen, head of Bohai Agricultural Machinery Cooperative where preparation on 50 mu for rice ploughing is underway.

As the "rice sack and vegetable basket" of the city, Qingpu District is proceeding with the resumption of production by key agricultural companies, cooperatives and farms. The target is to have 124,000 mu of rice paddies, 41,000 mu of vegetables and 17,000 mu of aquatic items back in production.