City's Metro and bus services to gradually resume from Sunday 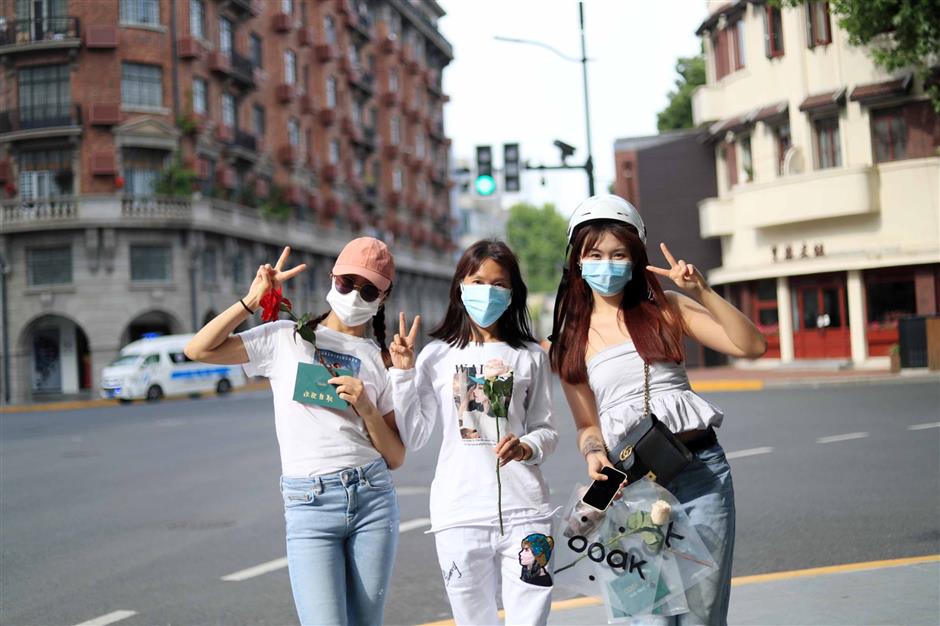 Citizens pose against a backdrop of the landmark Normandie Apartments in Xuhui District.

Four Metro and over 200 bus lines in Shanghai will restart operations from Sunday to connect downtown districts, airports, railway stations and hospitals, the city's vice mayor said on Thursday.

The Metro lines 3, 6, 10 and 16 will initially resume services along with 271 bus lines to meet the basic travel demands of citizens, Zhang Wei said.

A negative PCR report made within 48 hours is required to take the buses, Metro and other transportation. Also needed will be venue code, green health code and temperature checks, as well as facial masks.

Among the restored services, eight bus lines will connect with the city's Pudong and Hongqiao international airports, 19 will link Shanghai Railway Station and Shanghai Hongqiao Railway Station, 212 will reach city- and district-level hospitals and the other 34 are near the Metro stations of the four lines.

"It might be less than what residents expected as it is still the beginning of the gradual resumption of public transportation," Zhang said.

"Please be patient. Shanghai will optimize in a timely manner the transport arrangements according to the pandemic situation," he told the city's daily coronavirus press briefing. 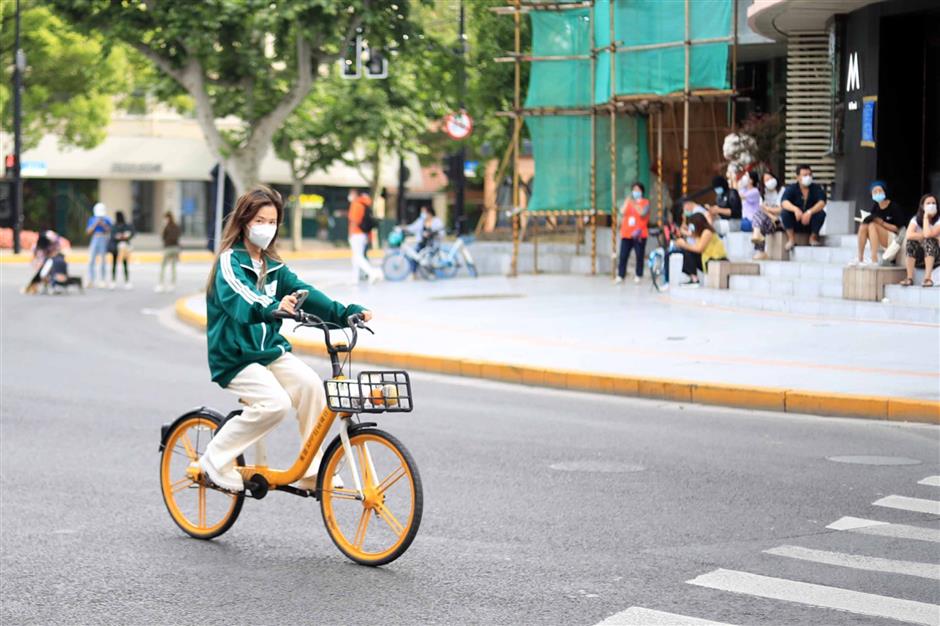 A woman rides a share bike on a downtown street.

The number of arriving and departing trains will also be increasing at Hongqiao and Shanghai railway stations.

The requirements for people to leave Shanghai remain the same to strictly prevent the virus from spreading to outside the city, Zhang said.

The arrangements for private cars and taxis are still under planning.

The city's public and intercity transport services will be fully restored when the pandemic is thoroughly stabilized, Zhang said.

The number of local infections declined by about 16 percent to 719 on Wednesday, with zero community infections for the fifth consecutive day.

The city government has announced its three-step plan to bring life and business back to normal in Shanghai between June 1 and mid-to-late next month.

Pressure tests on public transport have been launched on the city's outskirts in districts such as Jinshan, Fengxian and Chongming, where buses and taxis have been permitted on the roads since this week, Zhang said. 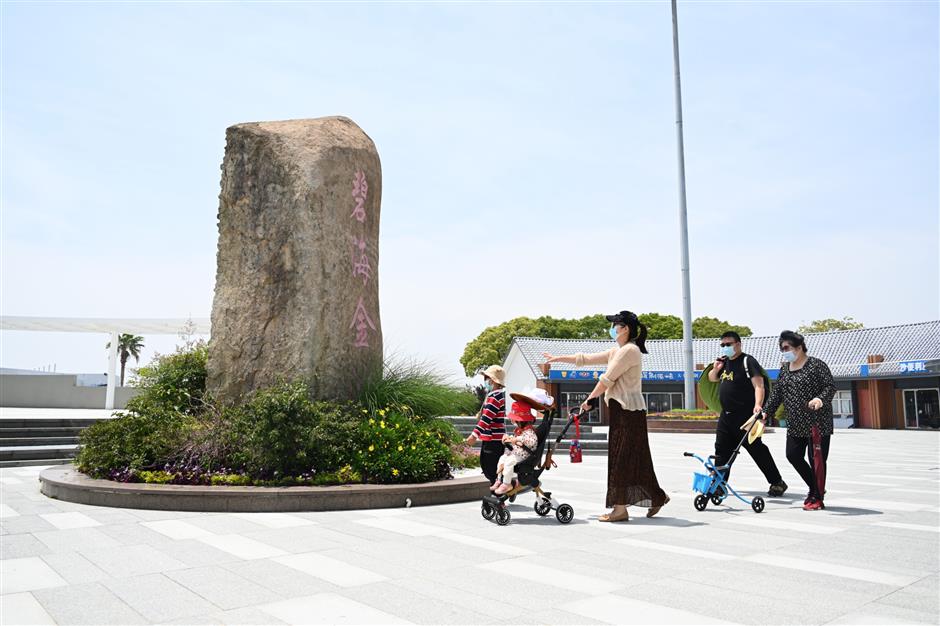 A family visits the reopened Bihaijinsha beach in Fengxian District.

In some downtown areas, an e-pass is required for vehicles to hit the road, while taxis can be booked for emergency needs including going to hospital. The Metro network and downtown bus services remain under suspension.

Drivers and other employees of the Metro and bus operators have returned to work to do maintenance, adjustments, malfunction screening and disinfection to prepare for the resumption of operations, said Yu Fulin, director of Shanghai Transport Commission.

Disinfection has been done on the air conditioning of buses, along with safety inspections on the Metro's fire prevention and evacuation facilities. Venue codes have been set up on over 18,000 buses.

Since May 5, Metro trains have been test operating across the network to verify equipment and prepare for reopening. All bus and Metro staff have received safety training. 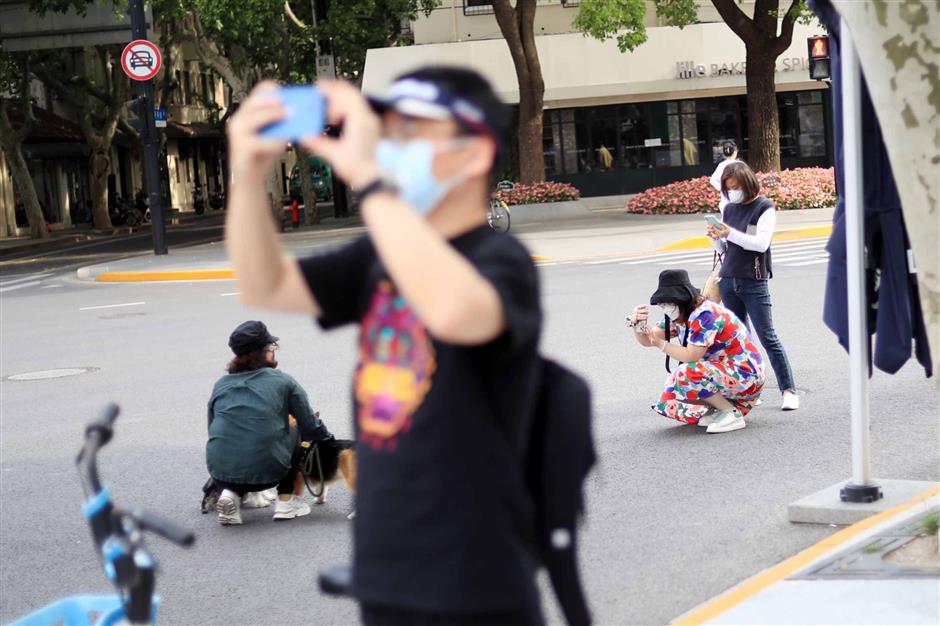 Free to walk the streets, people take photos to remember a post-lockdown experience.

The Metro stations, seats, bus terminuses, ticket machines and other facilities will be disinfected every four hours. The buses will be fully ventilated at the end of each day's operation.

EMS has initially restored delivery services of key documents, invoices and other important material for government bodies and clients. Over 1.1 million such items have been delivered.

The city's delivery capacity has been restored to 20 percent of the normal standard and will be further restored to 70 percent by mid-June, said Feng Lihu, director of the administration. 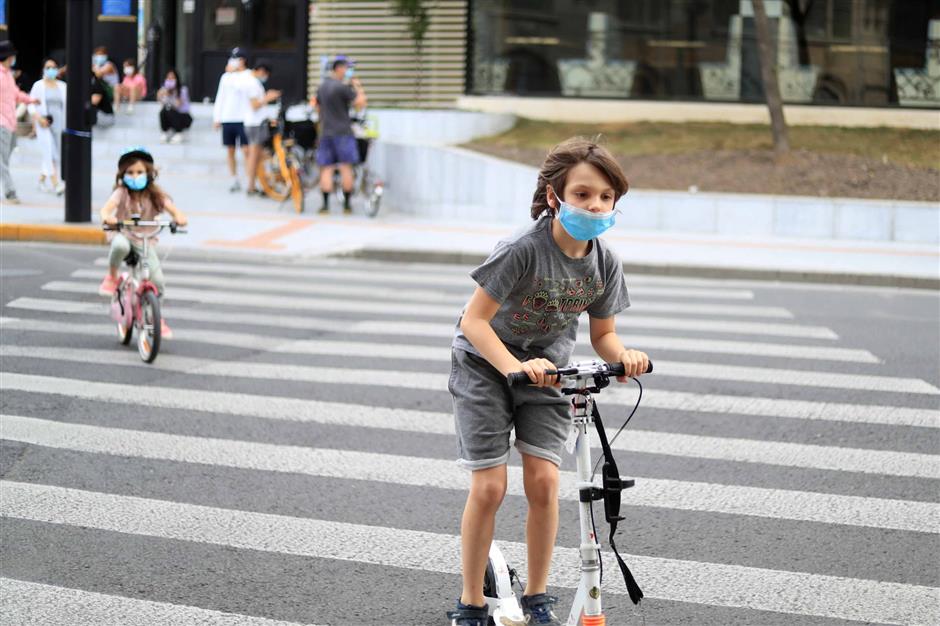