Shanghai on Monday morning was much busier than last Wednesday, the first day since the full restoration of the city's traffic after a two-month lockdown, as more residents have returned to work.

Congestion returned to some of the city's elevated roads during morning rush hour.

Police singled out congestion on the South-North Elevated Road from Guangzhong Road to Luochuan Road and the Inner Ring Road from Yanxi Interchange to Xinhua Road.

By noon on Monday, 2.5 million passengers had ridden Metro trains, compared with 913,000 who had ridden by 11am last Wednesday, according to the Metro operator. That figure is also 30 percent higher than March 15, when the virus surge commenced, Shanghai Metro said.

The Century Avenue station was the busiest station Monday morning, with more than 100,000 passengers by 12pm, up from 35,000 by 11am last Wednesday. 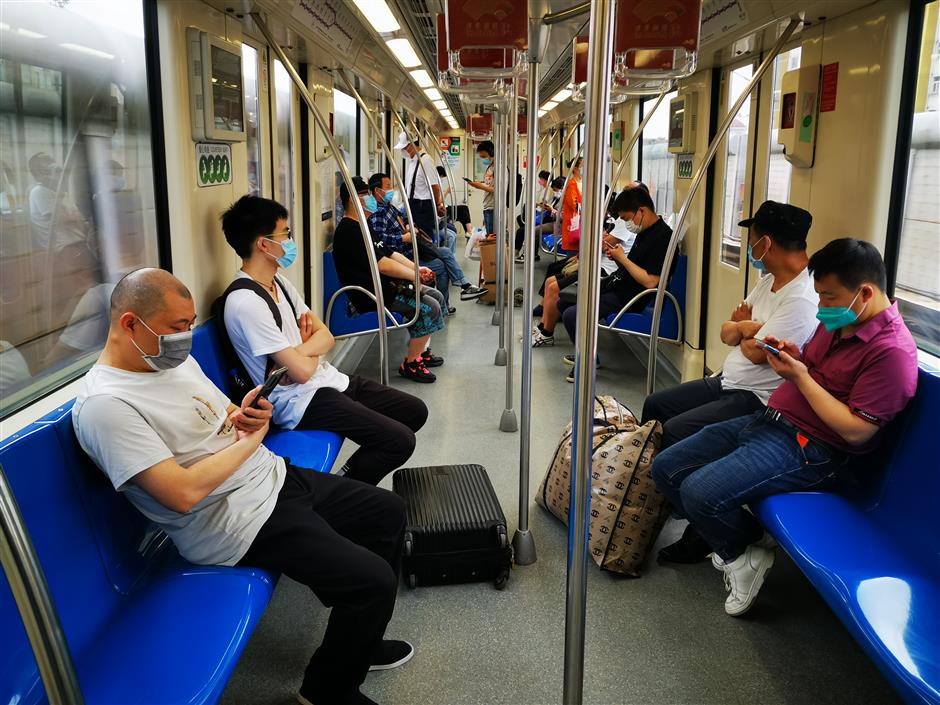 Shanghai's Metro operations have almost returned to normal this week with an growing number of passengers returning to work.

However, new stipulations have been implemented for Metro commuters in the wake of the city's reopening.

Tip 1: Check the duration of your PCR report and health code before going to Metro stations.

Metro passengers should determine when they will arrive at a station and whether their PCR report remains valid long enough.

Passengers will have their temperatures taken, which has to be below 37.3 degrees Celsius, and their green health codes and negative PCR reports must be from the prior 72 hours.

If a nucleic acid test result has yet to be released, passengers can show proof that a test has been taken in the previous 24 hours to enter a Metro station.

A venue QR code is posted inside and outside of every Metro station. Commuters should scan the code before entering the station and show the green code to the security personnel. They must keep 1 meter away from others during inspections.

Tip 3: Use the official Metro Daduhui app to enter a station with a single code.

Passengers do not have to scan a QR code or provide a PCR report if they use the Metro Daduhui app. The official app of Metro operator Shentong integrates PCR test duration, health code and Metro ticket code on the same page. Passengers can show this page to Metro staff and go through turnstiles by scanning the same page.

Tip 4: Seniors and people without smartphones can use Suishenma offline.

The offline code is a print version of Shanghai's QR health code. Residents over the age of 60 can apply for it at community service centers beginning on Monday.