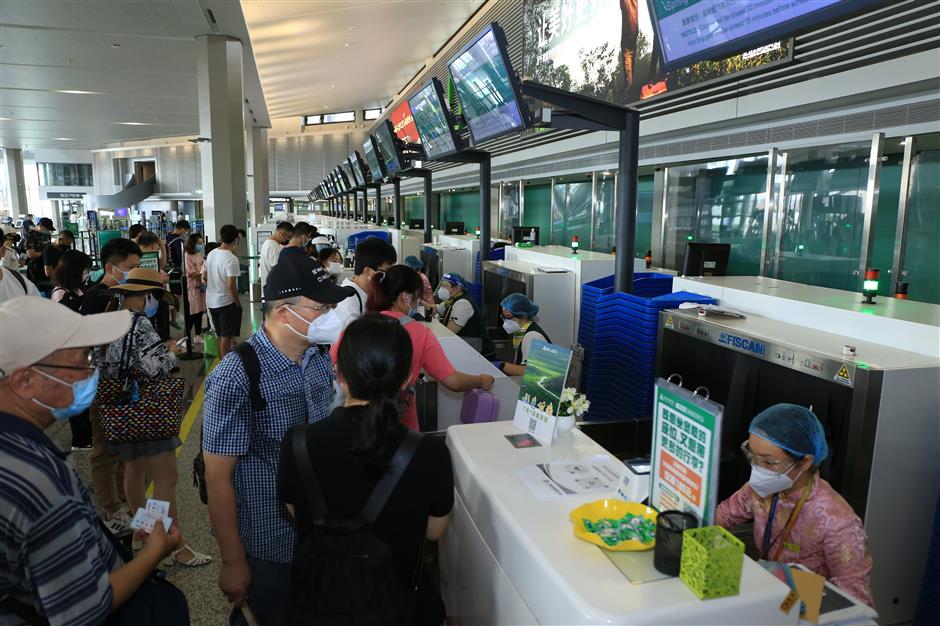 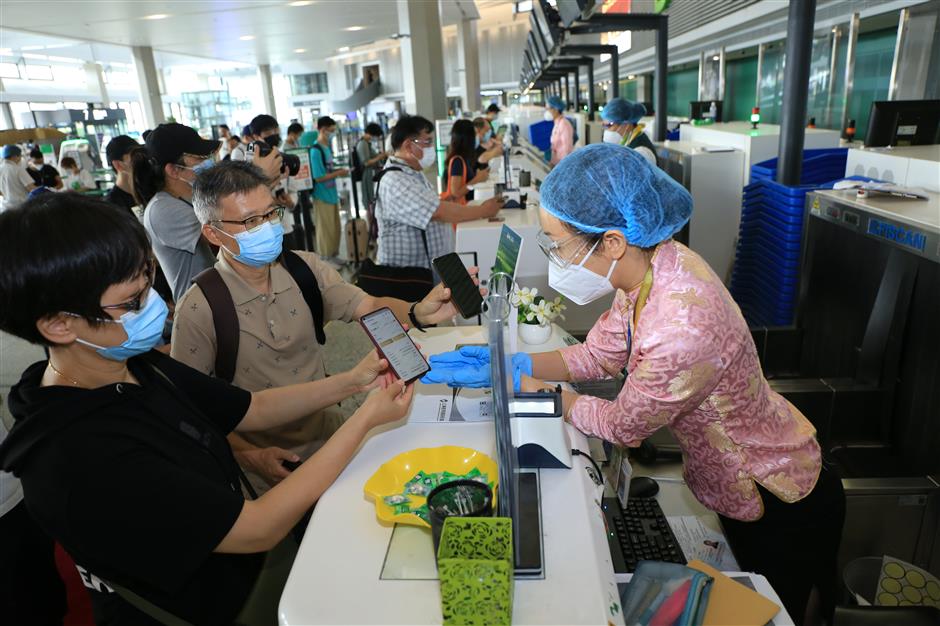 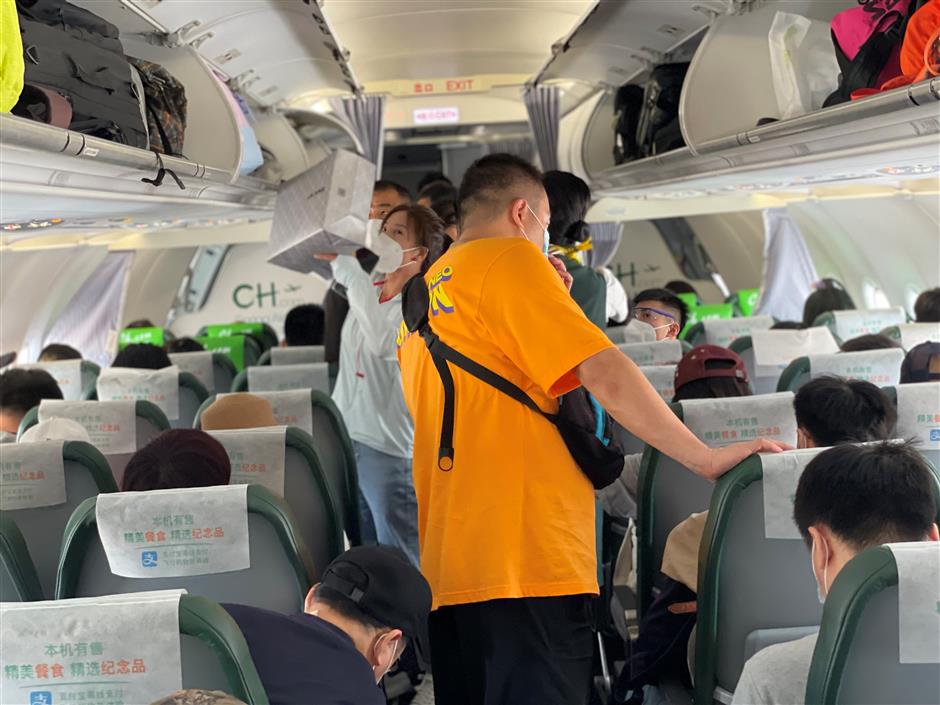 The packed flight carrying the first inter-provincial tour from Shanghai after the easing of COVID-19 restrictions.

Zhou Yunfei , a veteran tour guide, arrived at Shanghai Hongqiao International Airport as early as 7:30am on Friday. He was taking 22 tourists from Shanghai to Lanzhou, capital city of northwest China's Gansu Province, in Shanghai's first inter-provincial group tour after the COVID-19 outbreak.

It was his first trip since April 1. He could not be more excited.

"As a tour guide, I am used to traveling, but it all stopped suddenly due to the COVID-19 resurgence in Shanghai," he said. "The two-month lockdown made me anxious because of pressure, but I really love and miss traveling."

The group tour to Gannan Tibetan Autonomous Prefecture, which was organized by Shanghai Spring Tour, will last six days.

The trip will include visits to the Labrang Monastery, one of the largest temples of the Gelug sect of Tibetan Buddhism, and Sangke Grassland.

The period between June and September is the best travel period because of the region's mild temperatures and picturesque scenery. 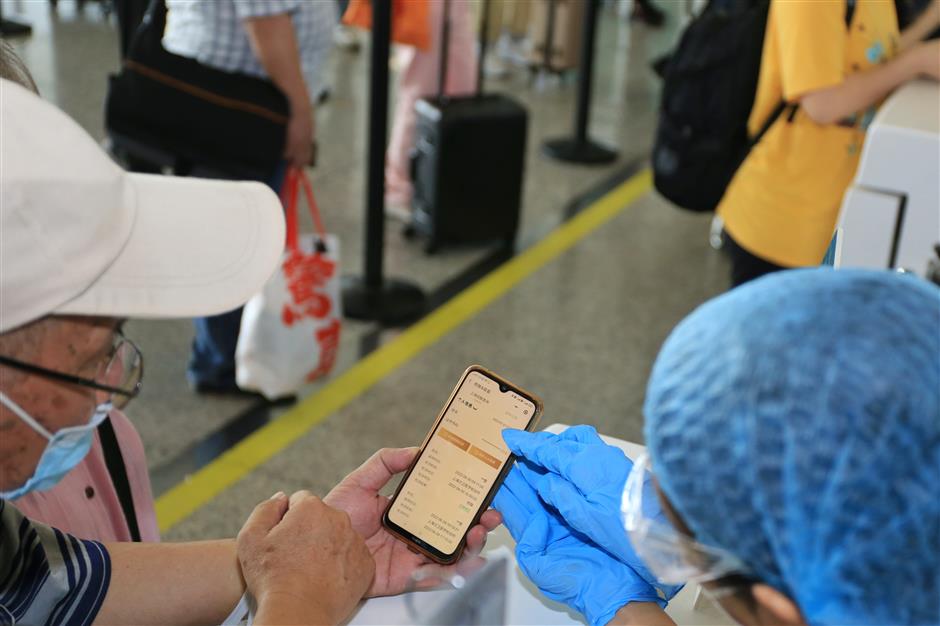 A Hongqiao airport staffer checks the nucleic acid test results of a passenger. 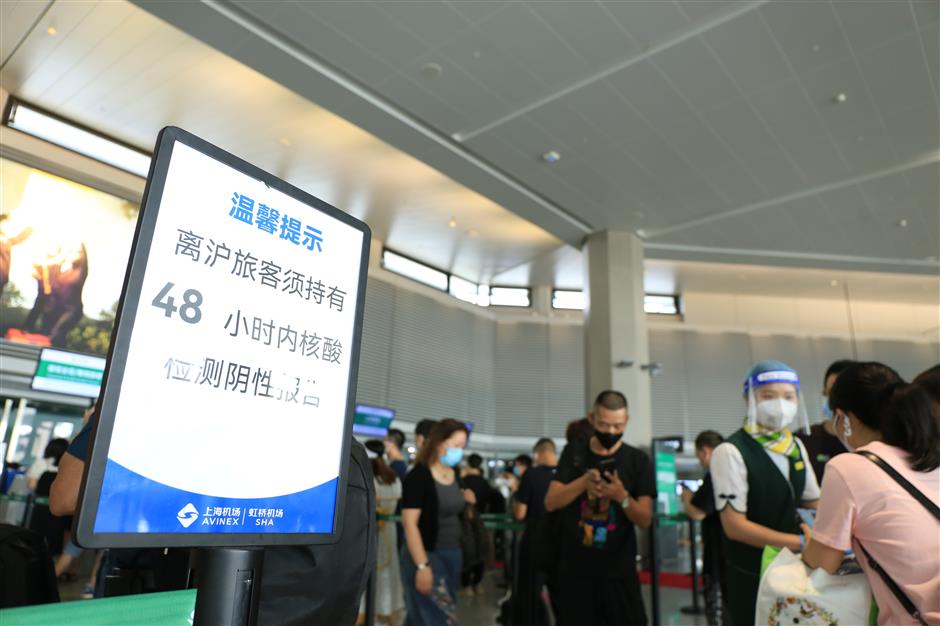 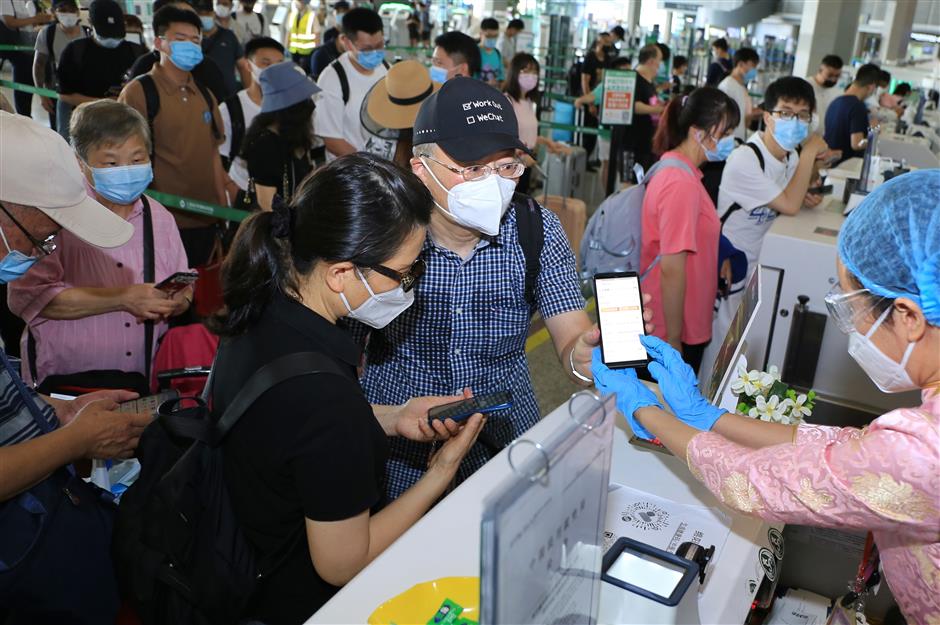 A busy check-in counter at the Hongqiao airport

Travelers from Shanghai's low-risk subdistricts or towns can move and travel freely in the autonomous prefecture based on eased local COVID-19 quarantine policies.

There were no seats available very soon after the trip was announced.

Zhou has taken tourists to Gansu Province several times, but this time it felt different, he said.

"I view it as my first tour group. I did a lot of 'homework' and studied COVID-19 prevention policies and measures before the trip," he said.

"I treasure the opportunity of returning to my beloved job," said Zhou.

Group members vary. There are two friends who have made 17 trips with the travel agency over eight years, Shanghai retirees, as well as young couples with children.

"Travel has been part of my life, and the return to normal life must include a trip far away," said a tourist surnamed Xi.

All tourists carefully wrote down their places of lodging based on prevention requirements before taking the flight.

"Travel agencies have been ordered to strictly follow COVID-19 pandemic prevention requirements, from the design of tour products and review of tourists' health status to pandemic control measures during tours and handling of emergencies," Zhou Weihong , deputy general manager of the travel agency, said.

"We expect the inter-provincial tourism market to accelerate during the summer vacation, which will help relieve the pressure on tourism operators," she said. 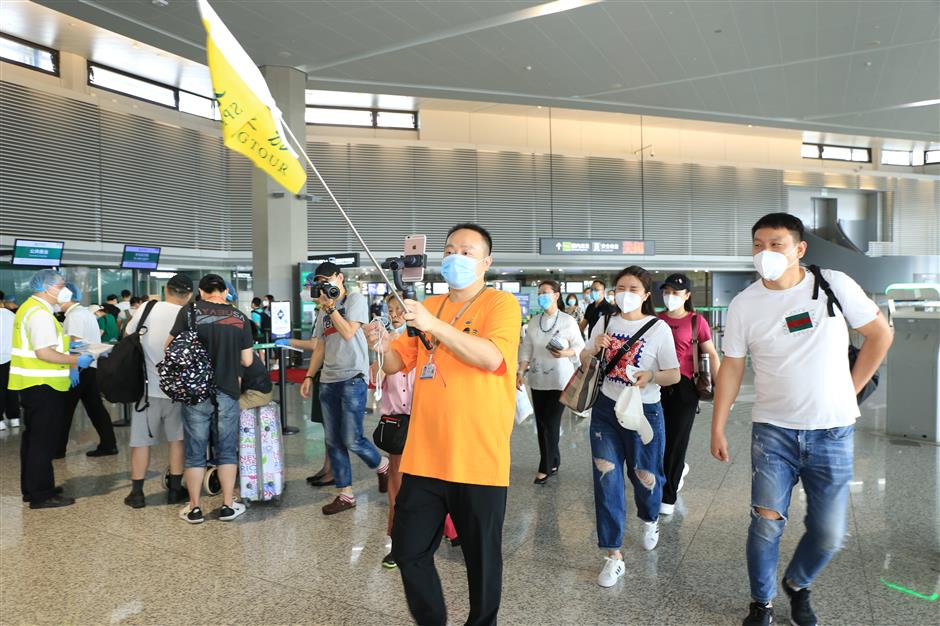 Inter-provincial group tour is back. 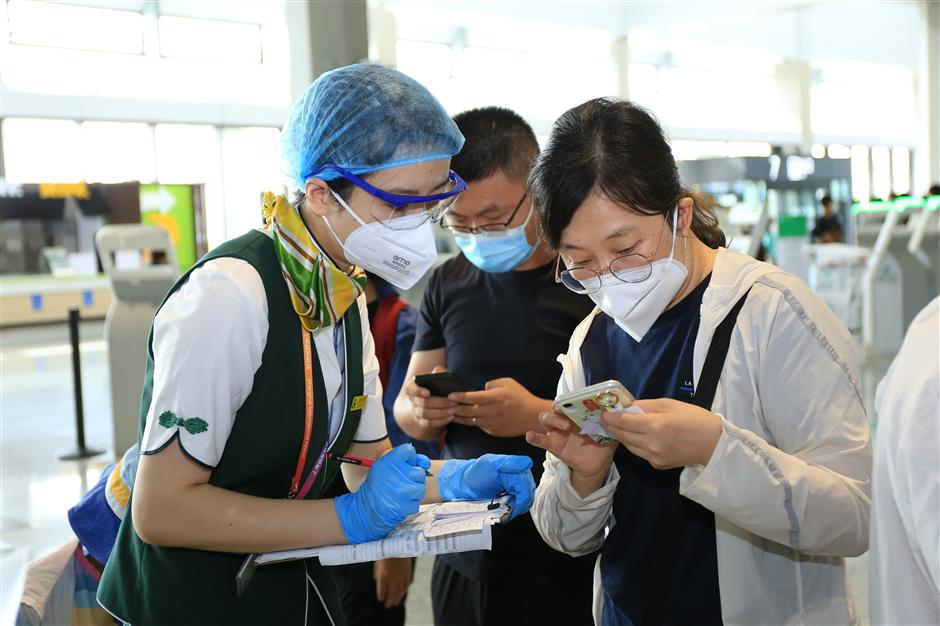 Li Yan , a staff member from the travel agency who was traveling with the group, said she was too excited to fall asleep for several nights before the journey.

"It is like a long dream coming true, and normal life is back," she said.

The travel agency has relaunched more than 1,000 inter-provincial tour products.

A raft of tourism-spurring policies and the waning of the pandemic are likely to spur the domestic tourism market.

According to Huazhu Hotels Group, the average occupancy rate in the second half of the month has surpassed 80 percent and is expected to rise further during the summer vacation.

It said the bookings of high-end hotels had particularly shown a significant increase, with high-end hospitality consumption gradually becoming the mainstream.

Shanghai-based online travel operator Trip.com said on Thursday night that there was an avalanche of bookings after the announcement that the stars marking high-risk regions on the tracking code were being removed from June 29. 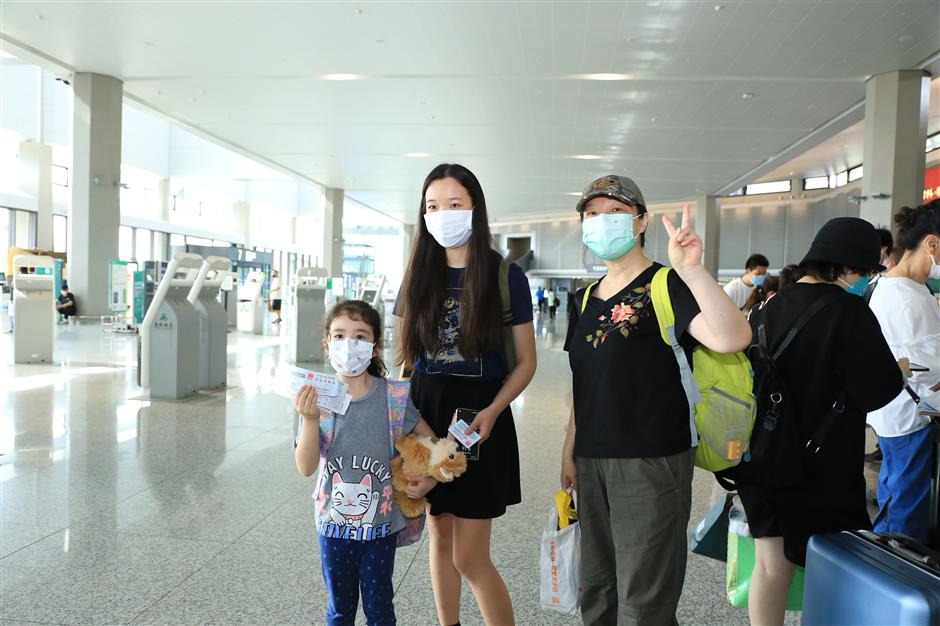 A family, which is part of Shanghai's first inter-provincial tour group, poses for photos at Hongqiao airport. 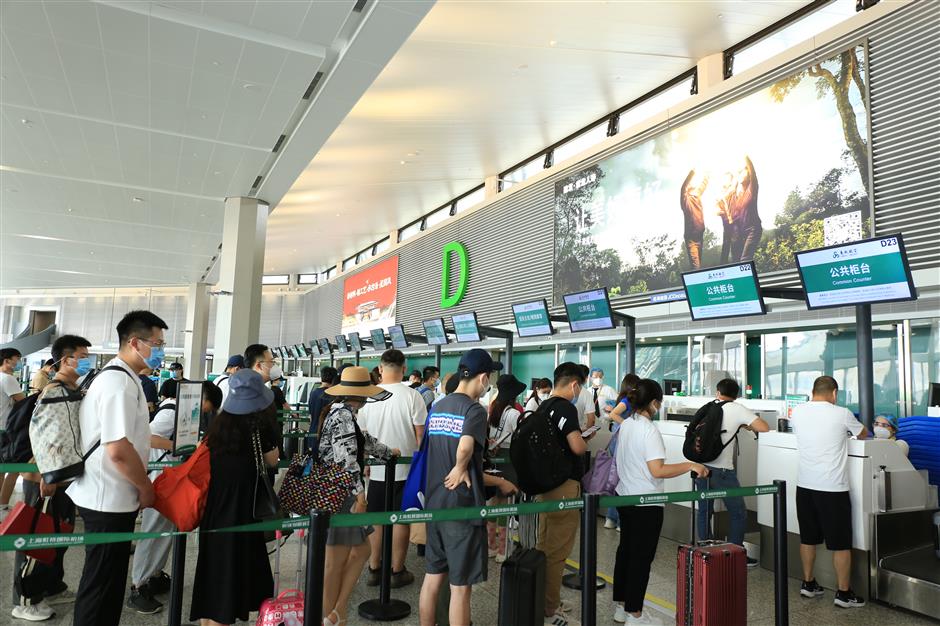 Travelers queue up to checkin at Hongqiao airport.

Shanghai travelers were among the most enthusiastic about the inter-provincial tour, it said.

Inter-provincial group tour orders from Shanghai travelers for the summer vacation soared 105 percent on June 29 from a day earlier, and there was a nearly 70 percent surge for bookings of air tickets from Shanghai.

In total, 43 percent of inter-provincial tour orders came from families with children. Sanya , Zhoushan , Beijing, Lanzhou , Chengdu, Lijiang , Qingdao and Chongqing were the most popular destinations for local travelers, according to Trip.com.

﻿
Special Reports
﻿
61922
,
61926
,
It is now OK to visit the elderly in senior-care homes
Shanghai is hot, and will get hotter when 'plum rain' season ends
Huge demand for inter-provincial tours as COVID-19 restrictions eased
A city for the people: I play Zhou Enlai at his former residence
COVID-19 in Shanghai: 10 imported infections, no new local patients
More global giants reaffirm confidence in Pudong
Shanghai makes it easier for graduates to apply for hukou
Cancer center offers solution for patients with same rare disease of Jobs
Trash-sorting becomes way of life in Shanghai despite pandemic
Watchdog body unveiled to protect city consumers' rights
EXPLORE SHINE