Metro service almost back to normal as stations reopen 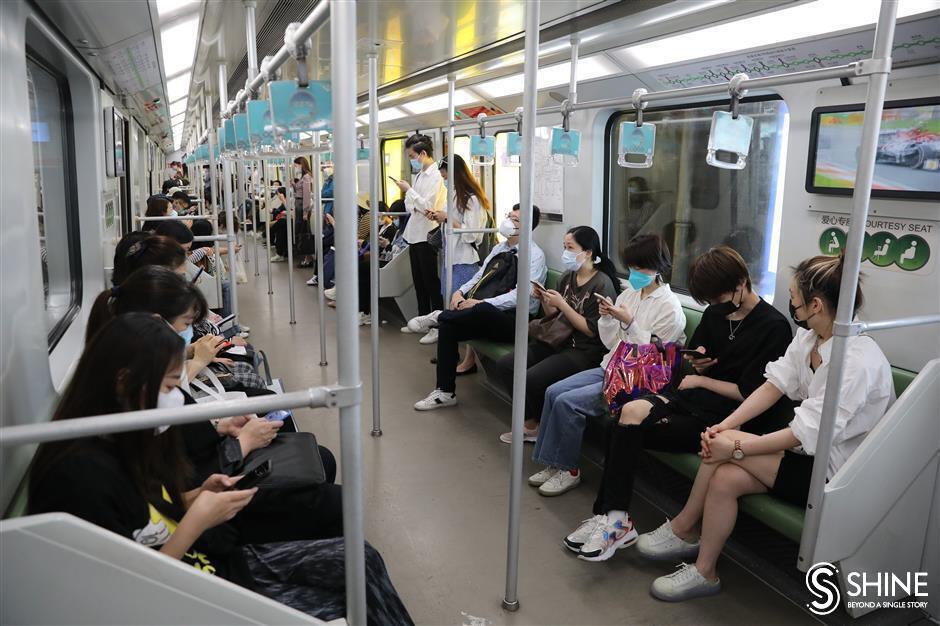 Passengers on a Metro Line 2 train.

Apart from the Shanghai Circuit Station of Metro Line 11, which will remain suspended, the city's 20 Metro lines will resume normal operations and services from Monday morning, according to the city's Metro operator Shentong.

Six stations of Metro Line 2 and 11 which were suspended for COVID-19 prevention and control will re-open. They include Line 2's East Xujing Road Station, Hongqiao Railway Station and Hongqiao Airport T2 Terminal Station, along with the Line 11's Huaqiao, Guangming Road and Zhaofeng Road stations – in neighboring Kunshan, Jiangsu Province.

There will be no additional requirement for Metro riders traveling between Shanghai and Kunshan, apart from another temperature check when they exit the Metro stations.

They must have the 72-hour negative nucleic acid test report or a 24-hour polymerase chain reaction (PCR) test certificate, as it is mandatory for all Metro travelers, according to Shentong. Commuters should also scan the code before entering the station and show the green code to the security personnel.

The city's Metro network was partly suspended at the end of March after Shanghai initiated its phased lockdown for Pudong and Puxi after the COVID-19 resurgence.

In early April, apart from the Metro Line 6 and 16 in Pudong, the city's whole subway network came to a standstill. During the peak of the pandemic, the two lines only receive about 1,800 passengers a day.

The last two remaining lines were also suspended on May 10, the first time since the city's first Metro Line 1 began operating in May 1993.

As the pandemic waned, four Metro lines initially restored operation on May 22 with longer intervals and limited operating hours, a welcome sign that the city's long COVID-19 lockdown would end soon.

The number of passengers has increased rapidly since the lockdown was lifted on June 1. The network handled some 1.8 million commuters during the morning rush on July 1, almost the same with that before the resurgence.