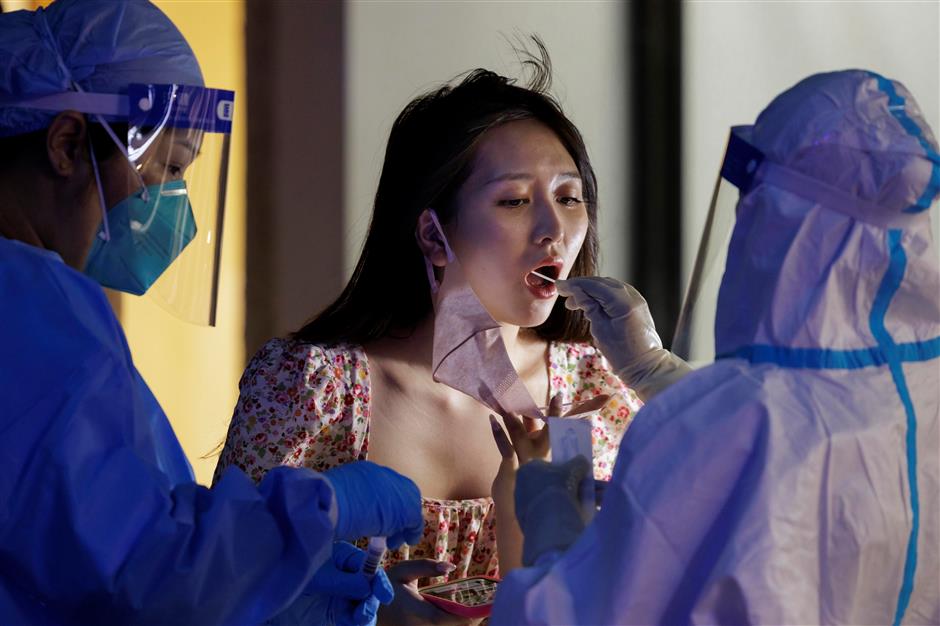 A woman receives a PCR test on Sunday evening.

Shanghai will launch another round of mass nucleic acid screening in nine districts from Tuesday to contain the risk of community transmission of COVID-19.

The city's COVID-19 prevention and control authority said on Monday that the districts with new positive cases or subdistricts and towns where infections have been found must do mass polymerase chain reaction (PCR) screening twice in three days.

The mass PCR tests will be conducted twice in Huangpu, Xuhui, Changning, Jing'an, Putuo, Hongkou, Yangpu, Minhang and Baoshan districts – as well as some parts of other districts through Thursday.

"The risk of community infection still exists in the city. Such screening is expected to detect and contain the risk of resurgence as soon as possible," the authority said in a statement.

Every resident, including those in streetside shops and hotels in these districts, is subject to mandatory testing. A 24-hour negative PCR report is required to leave the community, companies, or venues during the screening.

The daily number of positive cases found in central quarantine has been declining for about a week, down to 17 on Sunday, compared with 69 during the peak of the KTV-triggered resurgence since July 3.

There are currently eight high-risk areas and about 90 medium-risk areas citywide.