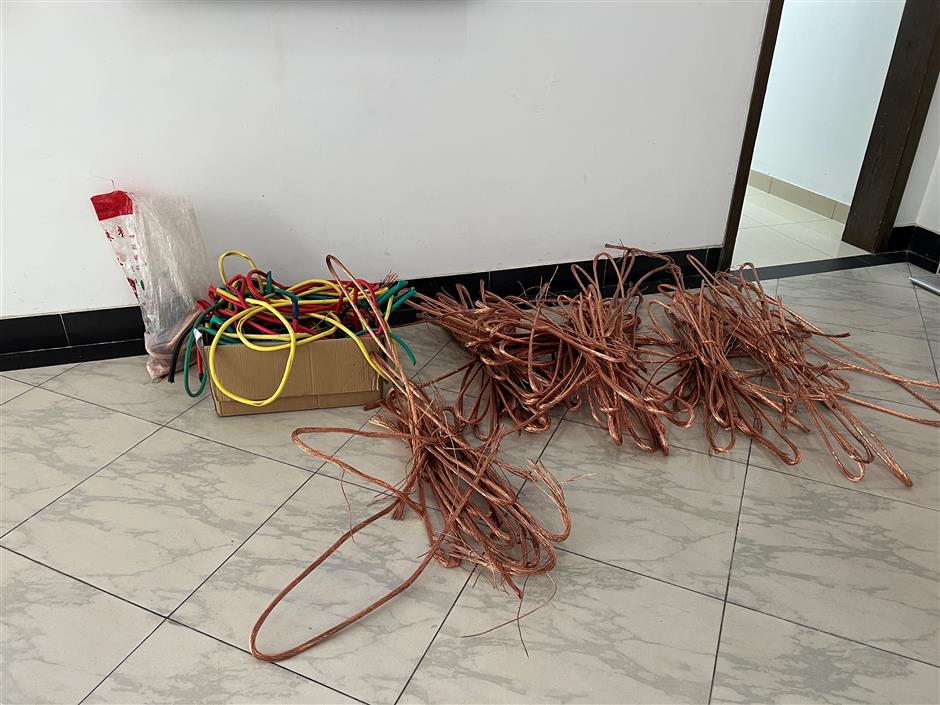 A part of the stolen cables seized by police in this case.

Two suspects have been taken into custody for allegedly stealing power cables from residential buildings, Shanghai police said on Monday.

While cable thefts are not rare, those that happened in residential complexes were not common in Shanghai.

Several residents of a community on Baili Road, Putuo District, reported to police recently that the cables in the vertical shafts of their buildings were found missing after they suffered frequent power tripping at home.

During their investigation, police found that the same had occurred at a few other residential complexes nearby, and two men were soon identified as the suspects in the theft.

From public surveillance videos, the two, surnamed Zhou and Wang, were seen wearing uniforms of the State Grid, though they were not employees of the power utility firm, police said.

They had allegedly committed the same theft in suburban Baoshan, Jiading and Qingpu districts as well since June and sold all the stolen copper cables to a woman surnamed Dong who works at a recycling service in Yangpu District.

Dong was aware that the cables were of suspicious origin and, as such, has also been detained, pending charges pertaining to covering up illegal profits, police said.

The duo has confessed that they had worked briefly for an electricity company and learned from experience that power tripping does not occur immediately when parts of cables are stolen from residential buildings. Electricity is knocked out after a while.