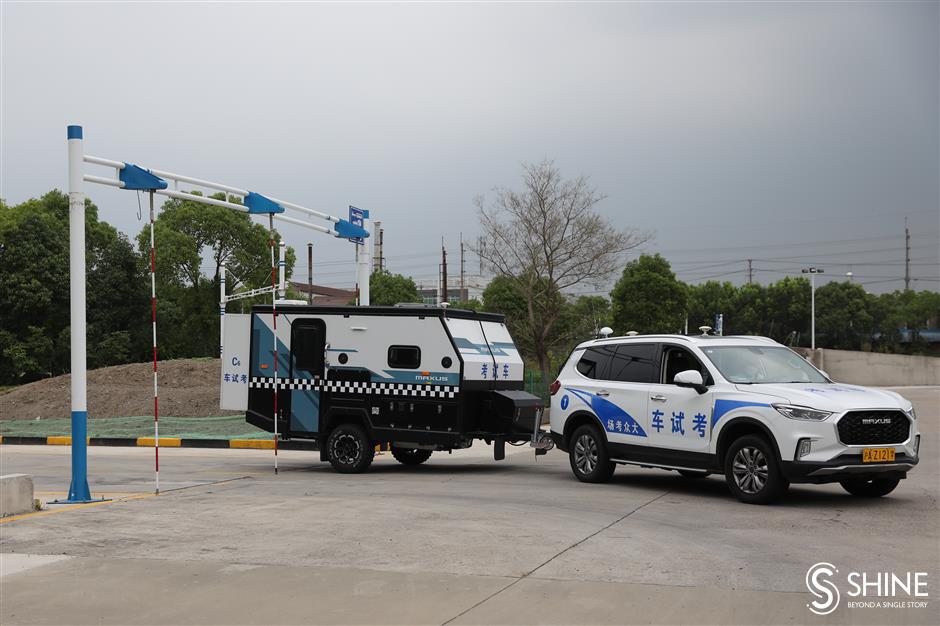 Sun Zhuquan, 59, a Shanghai resident, became the first person to take a driving test for the new C6 driving license in the city on Tuesday.

Two motorists proved their skills at steering recreational vehicles (RVs) with trailers on Tuesday in the first driving tests given in Shanghai for the new C6 driving license.

There has been a steady interest in this new type of driving license in China which was introduced in April to allow its holders to drive certain types of RVs, or light towing trailers weighing up to 4,500 kilograms in total mass to be precise.

The C6 driving license is not an independent type of driving license, because applicants must already possess valid driving licenses, but all small passenger car drivers in China, with C1 or C2 licenses, can apply for it if they fulfill certain preconditions.

Applicants have to give a written test on traffic rules and take a practical driving test on their skills for backing, zig-zag driving and making right angle turns.

At Dazhong Driving School in suburban Qingpu District, which became the first driving school in Shanghai approved by authorities to offer training services for the C6 license last month, Sun Zhuquan, a 59-year-old seasoned motorist, took his tests for the license on Tuesday. But it was not really easy.

Backing, he claimed, was the hardest part of the tests.

"I often struggle to control the direction of the trailer from the head car, even after 20 hours of training on this skill," Sun noted, adding that zig-zag driving and making right angle turns are much easier for him.

Sun, who is a zealous traveller, said he was looking forward to driving an RV around with his family since he's retiring soon. However, buying an RV at the moment is not option for him due to parking problems.

"If the pandemic situation allows, I hope to make an RV trip through Yunnan next year," he revealed, referring to the scenic southwest Chinese province.

Fang Yongxiang, 52, who is an experienced RV traveller, also took the tests at the driving school on Tuesday.

"The RV offers great convenience for travellers who enjoy quality bonding experiences in travelling with friends and families and great mobility since people can drive the head car around during daytime and sleep over in the trailer car at night," he pointed out.

Before the C6 license was introduced, trailer-type RV drivers, who mostly only possessed C1 or C2 licenses, were subject to varied license rules in different localities. The new license has cleared up such ambiguities.

Zhang Jinsong, vice general manager of Dazhong Driving School, revealed that about 100 people have inquired about the training program for the new license, with more than 70 already embarking on the program.

"Most of the people who have enrolled in the training program for the new license are over 50 years old, and a few are over 60, who expect to travel extensively in their retired life," he said.

"But the possibility of an alternative lifestyle is also attracting the younger generation to drive RVs around, such as a young couple undergoing training here, who told us that they want to make the RV their home and have a travel-work life."

Training programs for the C6 license at the school are more expensive than those for common C1 or C2 licenses. The charge for weekday training sessions is 6,800 yuan (US$1,008) for 30 classes and 9,800 yuan for weekend sessions, not including fees for simulated tests.

Carmakers have great expectations for the RV market in China as sales of such vehicles have risen sharply in recent years. 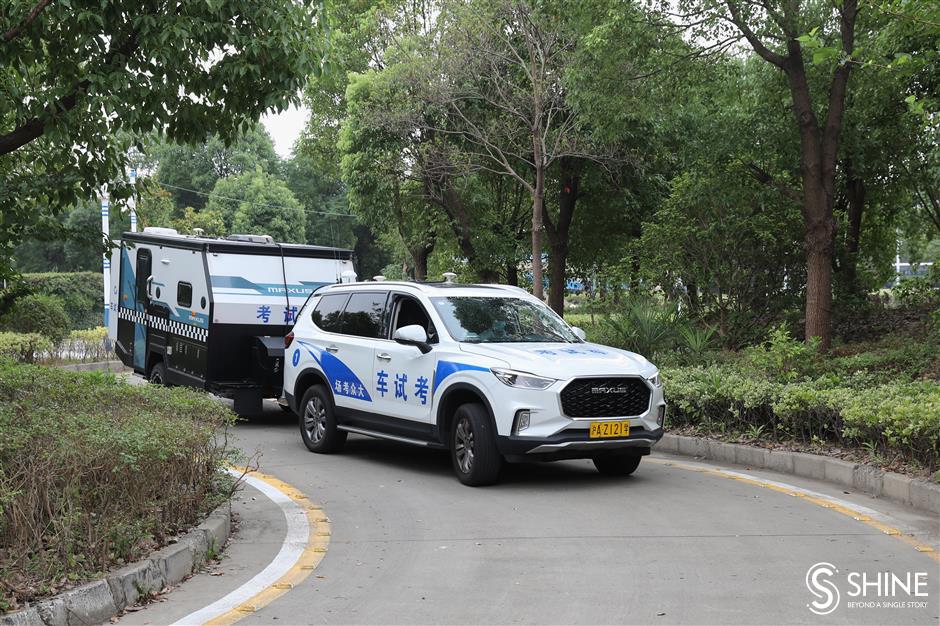 Sun Zhuquan drives an RV during his driving tests on Tuesday.

Q: If I don't have a Chinese driving license, can I apply for a C6 license directly?

A: No. Applicants must possess C1 or C2 driving licenses, with under 12 points deducted in both current and the previous 12-month cycles.

Q: Do I have to take tests for the C6 license?

A: Only those who possess A2 driving licenses for medium- and heavy-weight trailer trucks and have downgraded to lower-class licenses due to age or voluntarily can apply for a C6 license without taking a test.

Q: Are there any age restrictions for applicants?

A: Yes. The C6 driving license is available for applicants between 20 and 69 years old, but those aged 60 to 69 years will have to undergo additional tests on their driving capability.

Q: Can I continue to drive the types of vehicles designated to the C6 license after I turn 70?

Q: Can I drive a non-trailer RV with the C6 license?

A: No, different driving licenses are required for driving different types of RVs in China.