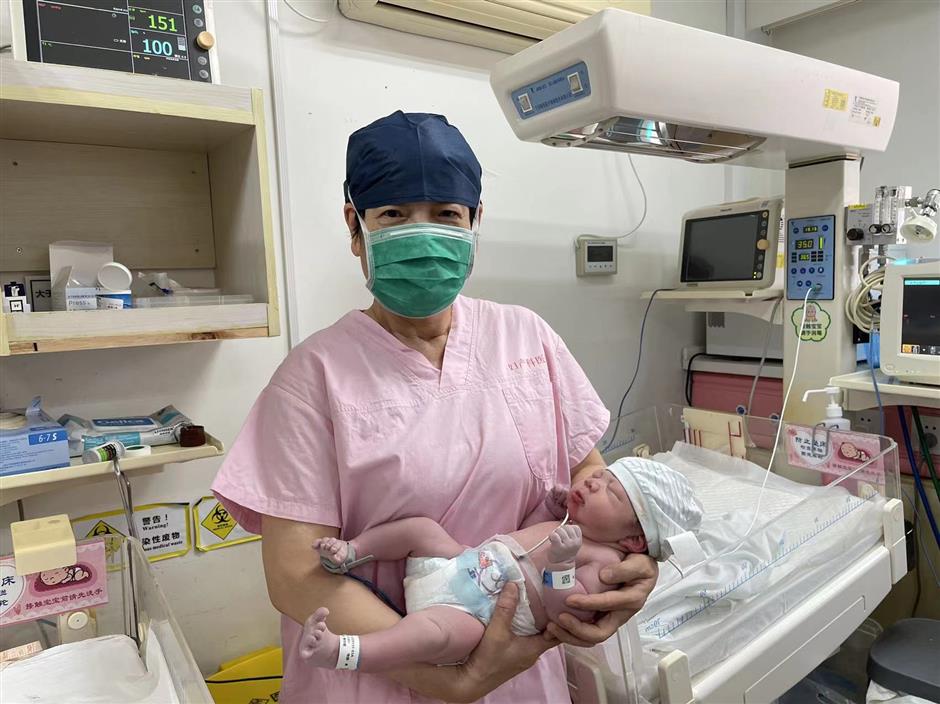 Dr Huang Hefeng holds the baby boy delivered in Shanghai on Tuesday. He is the world's first baby born with genetic testing technology to reduce the risk of paternal inheritance of type II diabetes.

A baby born into a family with a history of serious type II diabetes, a polygenic disease, was delivered on Tuesday in Shanghai through genetic testing technology, which selects embryos with low risk.

The technology that doctors from the Obstetrics and Gynecology Hospital of Fudan University have used is pre-implantation of genetic testing technology for polygenic disease, or PGT-P.

PGT technology, through which doctors conduct genetic testing on embryos and select healthy embryos for transplant to prevent genetic diseases, is not new. But it is used for single gene disease.

It is the first time that PGT-P was used in clinical practice in China and the baby with low risk of type II diabetes is the first in the world to be born through PGT-P, doctors claimed.

Polygenic disease is caused by the interaction of multiple genes and environmental factors. Common polygenic diseases include inborn deformity like cleft lip and palate, metabolism diseases like diabetes and tumors like familial colorectal cancer.

Many male family members of the baby's father have serious type II diabetes. The grandfather's generation was diagnosed with the disease in their 60's, while the younger generation are showing symptoms much earlier. The baby's father was diagnosed with the disease in his 30s and has to depend on medication and insulin injection.

The couple went to the hospital in order to have a healthy baby, who could avoid the diabetes risk.

"PGT-P can't completely block the inheritance of targeted disease, because there are multiple genes related to polygenic diseases. But it can reduce the risk by selecting comparatively high-quality embryos. The technology can greatly reduce the baby's possibility of contracting type II diabetes," said Dr Huang Hefeng of the hospital and the leading expert of its reproductive medicine center.

The process, however, was not easy.

Due to a lack of genome database of Chinese with type II diabetes, doctors conducted comparison with some 500,000 people and 27,497 type II diabetics at the UK Biobank and worked out the genetic model for the couple based on various genetic information for PGT-P.

Among the 16 embryos, doctors found one with low risk of type II diabetes and carried out the transplantation. The whole pregnancy was smooth under doctors' care and the woman delivered the boy through cesarean operation.

"Many chronic diseases like diabetes and hypertension are polygenic diseases and their incidence is rising as the disease prevention and management on adult patients are not very successful," Huang noted.

"The PGT-P technology offers a new solution as we can block the disease at birth. It is very meaningful for the prevention and control of genetically-related chronic diseases."